in News Articles 2013
Share on facebook
Share on twitter
Share on email
Share on whatsapp
FeedBack Loop is a performative project which has been shortlisted for Infecting the City 2015. In order to achieve this project, the group – representative of the staff and students at Rhodes University Fine Art Department who are engaged in performance art research – need to crowd fund at least half of their costs (transport and accommodation). They have only two weeks to realise their goal of R11 000 in order to bring Feedback Loop to Cape Town.
This essential project that consciously and self-consciously reviews festival performances, attempts to redraw and personalise the relationship between artists, reviewers and their audiences. Through this project, another dimension will be added to the audience’s experience of the Festival, and each production ‘reviewed’ will allow for deeper engagement with specific performances, thereby extending the lives of these beyond the event (through its documentation). 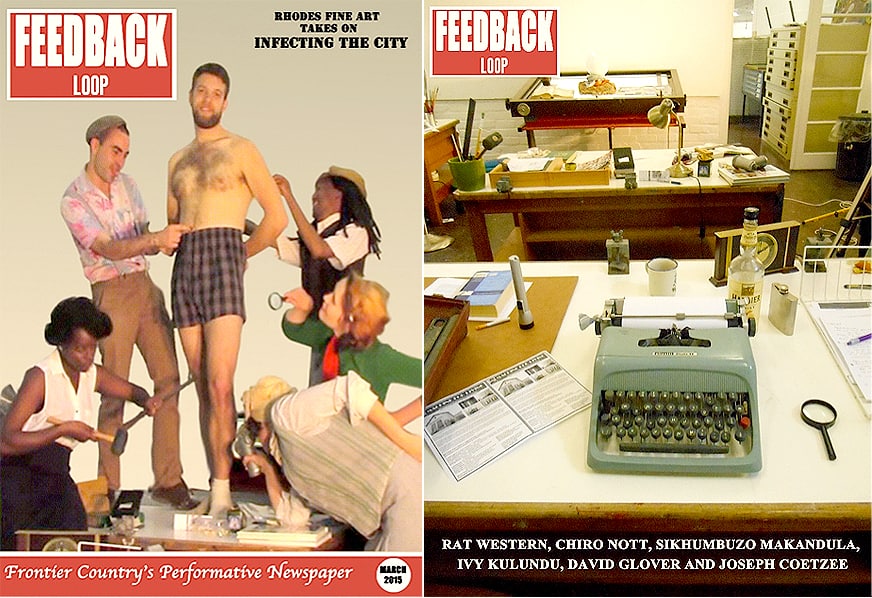 ABOVE: FeedBack Loop promotional material. Images courtesy of Rat Western.
The writing of our lives defines us, and presents a unique problem with performance art. What drives reviewers is a network and reputation; what drives artists is the ineffable and personal. The review is essential, but always a lie that replaces the truth. We elect to investigate this truth, with a performance of reviewing that ties it once more to the human and personal, attempting to redraw the relationship between the artists and the most abstract audience.
A group of academics (also performers and researchers in their own right) will produce and distribute a newspaper which investigates ITC performances, their interactions with public space, and both incidental and intentional public encounters with the performances. These will be supported by premeditated articles which contemplate the nature of contemporary performance. The collective has elected to use the format of a newspaper as a metaphoric lens to alter perspectives, question assumptions, and shift boundaries on ‘the commentator/reviewer/participant’. This take on a publically familiar structure will include variants of classics like News, Sports, Lifestyle, Weather, Advice Column, Horoscopes, Crossword, Recipes and Finance which will present a variegated documentation and reflection of events as they occur.
The FeedBack Loop group has already had some success in raising funds aside from Thundafund, but now call on the public and the artworld to invest in their project, and the emerging young artists, staff and students who are working to explore their common goal: investigating the nature of contemporary performance art in South Africa.
The culture of online donating is relatively new in South Africa, but initiatives and campaigns such as this are a worthwhile investment. In addition to the rewards on the site, all sponsors will be mentioned in the final newspaper and donations start from R30.
Find out more and support FeedBack Loop here.