Riason Naidoo: Media Statement on the Directorship of Iziko SANG

in News Articles 2013
Share on facebook
Share on twitter
Share on email
Share on whatsapp
Dear colleagues, partners, members of the media and friends.
I write to inform you that I have reached the end of my 5-year-contract as Director of Iziko Art Collections, which concerns the South African National Gallery & Old Town House museums under the umbrella of Iziko Museums of South Africa. It has come as somewhat of a surprise to me that I’ve been requested by Iziko to vacate my position and it is unfortunate that Iziko did not see it fit to extend my contract. I do believe that the actions of Iziko are unfair in this regard and will be looking to contest this decision further. 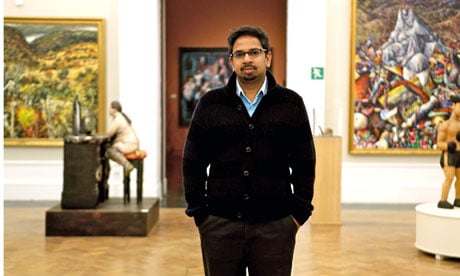 Riason Naidoo. Photograph: Moeketsi Moticoe/Sunday Times SA. From the guardian.
This is regrettable especially since I believe that we have achieved a lot at the South African National Gallery and the Iziko Art Collections department over the last five years and under some challenging conditions especially with regard to limited resources.
For example we showcased and produced a number of high quality local and international exhibitions during this period, this being one of the most important aspects of the work we are mandated to do. We attempted to show the permanent collection in different and interesting ways curating across the different curatorial departments and across the timeline to reflect the diversity of the collection and one that is reflective of the multicultural society that we live in. Examples of these exhibitions are 1910-2010: From Pierneef to Gugulective (2010), Random Works? (2011), Baroque meets Modern – OTH (2011), Imagining Beauty (2010), Neither Man nor Stone (2012) and Objects in the Tide of Time (2013), to name but a few.
In this context we also took down the Bailey Collection – a standalone, dedicated and permanent exhibition that had been constantly shown since 1947 – and integrated artworks from this collection into the permanent collection exhibitions where possible, finding creative solutions to this longstanding dilemma.
It was important for us to address the imbalances of the past by acknowledging important and often overlooked artists in local art history via retrospective and group exhibitions such as Alexis Preller: Africa and the Sun (2009), A Vigil of Departure: Louis Khehla Maqhubela 1960-2010 (2010), Ernest Cole: Photographer (2011), Tretchikoff: A People’s Painter (2011), Peter Clarke: Listening to Distant Thunder (2011), Uncontained: Opening the Community Arts Project Archive (2012), Against the Grain: Five Sculptors in Wood (2013), Peter Clarke: Our artist, Our Poet! (2012) – Dak’art, Senegal, Peter Clarke: Wind Blowing on the Cape Flats (2013) – INIVA, London, Opening ‘Plato’s Cave’: The Legacy of Kevin Atkinson (2013) and George Hallett: A Nomad’s Harvest (2014), to mention a few. We also raised more than R2,5 million for A Portrait of South Africa: George Hallett, Peter Clarke & Gerard Sekoto (2013) shown in Paris from 29 October – 27 November 2013.
One of my personal highlights has certainly been the staging of the 1910-2010: from Pierneef to Gugulective exhibition. Despite the initial controversy around the exhibition it brought in many new audiences and drew international attention to the SANG. Following the exhibition I was invited to make presentations of the exhibition at the Tate Modern, London (2010); Virginia Commonwealth University, Qatar (2011); ACASA Triennale, Fowler Museum, UCLA, Los Angeles (2011); Museum of Modern Art, New York (2012), Dak’art biennale, Senegal (2012), Independent Curators International Curatorial Workshop, Bag Factory, Johannesburg (2013); School of Arts, Wits University, Johannesburg (2013) and in 2014 I’ve been invited for the same at the Independent Curators International workshop in Addis Ababa, Ethiopia and the California College of the Arts, San Francisco.
We also looked to showcase more art from the rest of the continent. This was important to shift the focus away from the historical North-South relationship to a South-South one. With the South African National Gallery being one of the premier institutions on the continent with sound infrastructure, conditions and prime location we could also offer to be a window on the continent for both local and foreign visitors and in that respect we hosted Borders: An exhibition from the Bamako Encounters 8th African Photographic Biennale (2010) – Mali, Ever Young: James Barnor (2011) – Ghana and Rotimi Fani-Kayode: Traces of Ecstacy (2014) – Nigeria. While the Rendez-Vous 12 exhibition shown at SANG in 2012 was from the Lyon biennale in France, it perfectly suited our vision as the exhibition consisted of artwork by twenty young artists from countries such as Brazil, Mali, India, Thailand, Russia, Australia, USA, United Kingdom, France and Turkey, among other countries; we raised more than R1,1 million in sponsorship to make this important exhibition possible.
We have been working for some time now with partners in Haiti and the U.S. towards an exhibition showcasing an overview of Haitian art from the modern to the contemporary; in February 2014 I received confirmation of funding to the value of 500,000 Euros towards this exhibition planned for SANG for December 2015.
Of course, we could not have accomplished all of this without forging important partnerships and fundraising and I must express my deep appreciation to all the partners and collaborators that supported us during these last five years and most especially in the very difficult period of the last three years.
In 2010 and 2011 we achieved a significant increase in visitor numbers corresponding to the 1910-2010: From Pierneef to Gugulective exhibition (67%) and the Tretchikoff: A People’s Painter exhibition (106%) respectively, before being affected by severe budget cuts (approximately 80%) affecting the most important areas of our work: Exhibitions and Acquisitions.

Still I believe that we reported significant acquisitions in terms of redress of the collection such as by artists Noria Mabasa, Billy Mandini, Lionel Davis, Peter Clarke, Ian Berry, Samson Mudzunga, Fanie Jason, Nhlanhla Nsusha, Dan Rakgoathe, Vuyile Voyiya, George Pemba, Helmut Starcke and Cedric Nunn, to mention a few.
At the same time it was our strategy to acquire contemporary work by promising emerging artists. This was important because the South African market had changed drastically in the last ten years. No longer could we sit back and wait for an artist to be established before we acquired an artwork by them. The international art market, including museums with foreign currency, was now actively purchasing contemporary South African art to represent their respective departments of African contemporary art. With very limited resources we had to be more proactive and look out for talented emerging artists before the markets celebrated them. In this respect we acquired works by Kudzanai Chiurai (2009), Athi-Patra Ruga (2009), Hasan and Husain Essop (2009), Gabrielle Goliath (2010), Sabelo Mlangeni (2010), Pierre Fouche (2010), Cameron Platter (2011), Ndikhumbule Ngqinambi (2010), Gina Heyer (2011) and Zander Blom (2011) et al. in addition to acquiring works by artists recently established such Nontsikelelo Veleko, Nandipha Mntambo, Michael MacGarry, James Webb and Zanele Muholi among others. Notable was the acquisition of Reign (2010) by Mary Sibande purchased jointly by the Friends of the National Gallery and SANG in 2012 – the most costly acquisition of a contemporary artwork and already one of the most popular artworks in the permanent collection.
There were many, many significant and important donations during this time and I must extend my heartfelt appreciation to those patrons and supporters that showed confidence in the work we were doing; it was a healthy reflection of the partnerships we had built at the South African National Gallery and the Iziko Art Collections department.
In the same context I was only just contacted in April 2014 on behalf of a private collector who would like to donate a contemporary artwork to the value of R3 million. This is an amazing gesture and it would be the most expensive donation of a single contemporary artwork ever made to the South African National Gallery, chosen as a potential institution over and above other prestigious institutions viz. the Tate Modern and the soon to be built Zeitz Museum of Contemporary African Art.
With regard to staff we have just appointed two experienced and qualified black employees (Curator: Contemporary Art and Collections Manager) in senior positions, which is unprecedented for the South African National Gallery and the Art Collections department.
I strongly believe that, together with the staff at the South African National Gallery, we have made a significant contribution in taking the museum and the Art Collections department forward in the last five years, and I envisaged doing more with this team in the future.
I would like to take this opportunity to sincerely like to thank you for all your support during these last five years.
Riason Naidoo
Cape Town, 8 May 2014