Robert Slingsby on his work with the Omo River Valley Tribes

Until recently, the people of the Omo River Valley in Ethiopia lived in harmony with the natural world. Increased development in the area has dramatically changed this. Robert Slingsby’s exhibition ‘In/Dependence’ seeks to trace their disappearing way of life at the hands of modernization

Brendon Bell-Roberts: When did you first start working in the Omo River Valley and how did it come about that you chose to work there?

Robert Slingsby: My work has predominantly engaged with the art and traditions of the indigenous communities of Southern Africa. Growing up in Cape Town, I encountered the Nama people’s geometric and complex rock engravings, which sparked my imagination. Their art inspired an interest in me of indigenous communities throughout Africa. 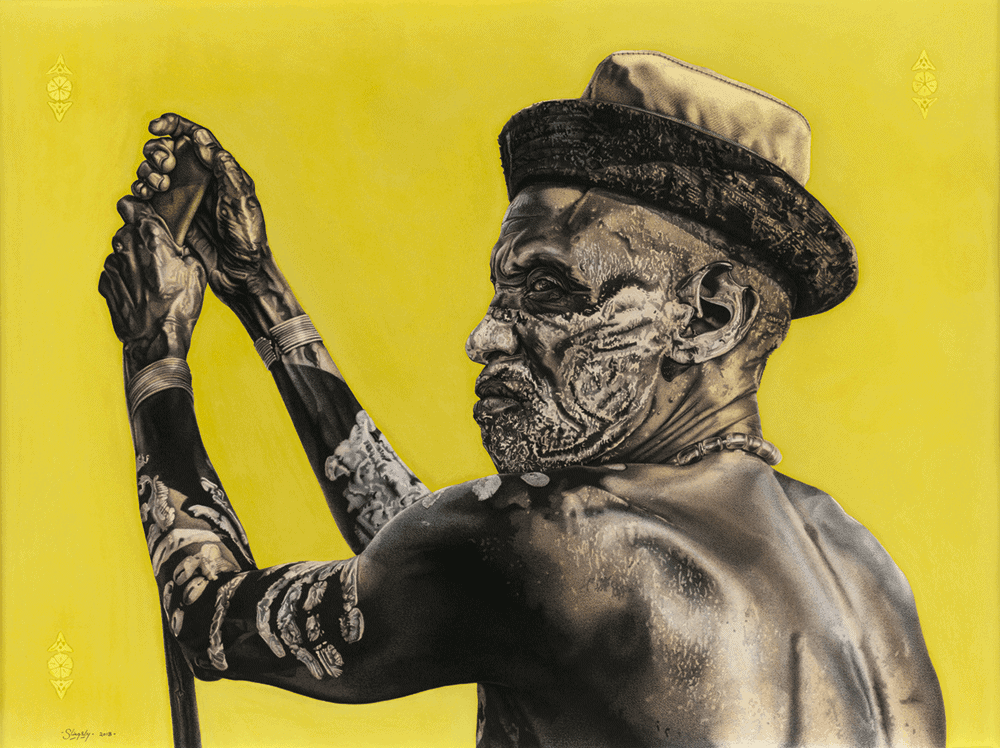 I have committed 30 years of fieldwork to develop a unique archive, in terms of scale and sample, focusing on the Richtersveld rock engravings which occupy a remote dolomite littered desert, situated in the north-western corner of South Africa’s Northern Cape province. Over the years, I could not help but notice the expansion and impact of opencast diamond mining, industrial agriculture, and private land ownership in the region. Many of these developments took place over land that was not only home to traditional Nama artefacts but the Nama communities themselves.

In 2012, I was doing research on the impact of industrial agriculture and the construction of dams on indigenous communities such as the Himba, in the Kunene Region of northern Namibia, where the Kunene River flows. Through my research, I became aware of the construction of the Gibe Dam in the southern Omo Valley of Ethiopia. This region is home to Mursi, Suri, and Kara communities whose art and traditions are becoming increasingly recognisable. Mursi women practice the tradition of wearing lip-plates, and the Kara adorns themselves with flowers. That same year, I made my first trip to the Omo Valley.

The communities of this region have cultivated a life that is in harmony with the Omo river, which empties into Lake Turkana on the border of Kenya. The local communities, who are traditionally pastoralists, have historically resisted colonialism, allowing their traditional way of life to remain intact – until recently. 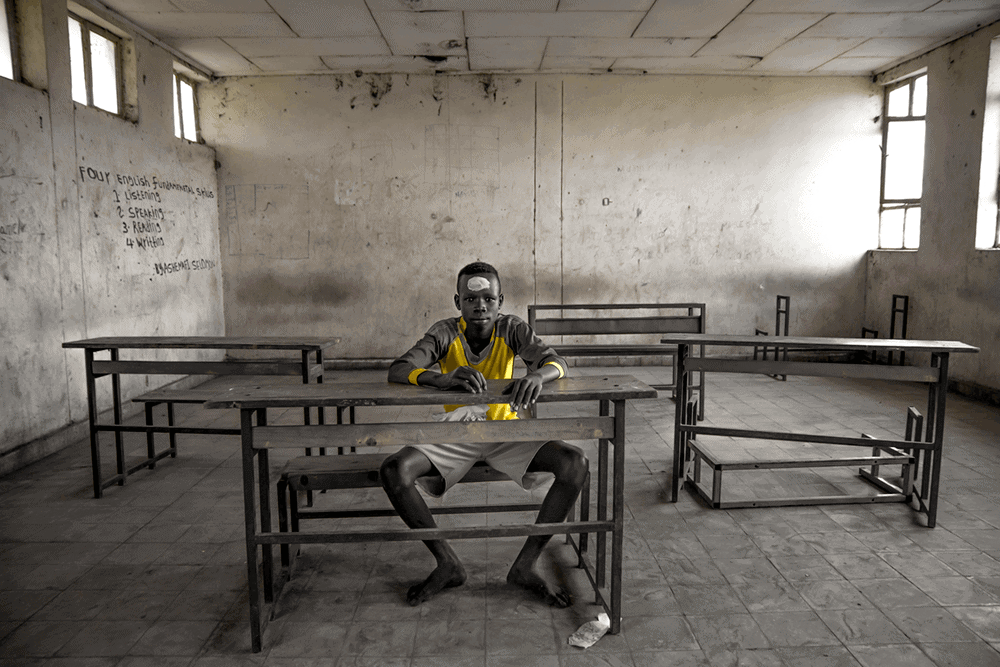 They practice body scarification in rites of passage ceremonies with the geometric patterns made permanent on their skin serving as living and contemporary reflections of similar depictions made in other remote regions of Africa. These markings also echo those of traditional, indigenous communities around the world. This universal symbolism is borne out of wisdom that is now threatened and could potentially be forgotten forever.

Visiting these communities would not be possible without the support of a team of individuals who are local to the area and experienced in traversing it! I travel in a 4×4 vehicle with a driver, translator, cook, and my wife, Janis. We travel for days, often get stuck, and camp out together – driving from village to village, meeting the people of the Mursi, Suri and Kara. On arrival at these villages, sharing food is customary. It is an acknowledgement of friendship, respect, and welcoming which builds “bond-friendships”. A bond-friendship can be understood as a spirit of community.

I have visited the Omo Valley four times since 2012. Much like my experiences in the Richtersveld, over the years visiting the same villages, I have observed a dramatic change in the life of the local communities. On my first visit, I camped in thriving tropical forests inhabited by an abundance of monkeys, insects, and bird life. On the second trip, I witnessed the destruction of these forests. The land had been leased by foreign investors (predominantly Chinese) and was being cleared to build cane sugar plantations, fuelled by the residing Omo River.

These farms have restricted access 15 kilometres before the entrance. The villagers I would normally encounter along the journey were all gone. I was told that they had “gone to the fields”. This comment gave rise to two of the artworks on my exhibition: The hand-carved wooden bench, Gone to the fields, and the 17-meter wide canvas photographic installation, The sugar-cane springs up and the people melt into the darkness.

Without formal land entitlements, locals are robbed of access to water from the river, and the environment has been destabilised due to the destruction of the forests. Villagers are forced to resort to working on the sugar plantations or migrate to the ever-expanding urban slums of Ethiopia for their survival. This transition has seen the dismantling of these communities who have until now retained their independence and resisted imperialism.

This transition to dependence inspired the title of my latest exhibition: ‘In/Dependence’ at CIRCA Everard Reed, Johannesburg, South Africa in March 2019. As in my previous exhibitions dedicated to the people of the Omo Valley, it features large portraits drawn in charcoal. However, in this show, my focus was on evoking an emotional experience and communicating the impact of industrial agriculture on the region. Private infrastructure development has seen the achievement of economic growth in Ethiopia – but it has also forced once self-reliant people to abruptly transition to a monetary means of subsistence.

“Private infrastructure development has seen the achievement of economic growth in Ethiopia – but it has also forced once self-reliant people to abruptly transition to a monetary means of subsistence.”

Your exhibition is a comment on man’s impact, and manipulation of the natural world for personal, economic, and political gain. Can you share some of your personal insights in this context?

The strength of the communities of the Omo Valley lay in their synergy with the land and each other. Survival now depends – not on cattle, the river, and family – but money. Today, Mursi women sell lip-plates and pose for photographs. The Lip Plate Cabinet showcases lip plates produced for commercial exchange by Mursi and Kara women. This income sustains their livelihood and explains why images of Omo Valley tribes have become increasingly mainstream. The Cabinet consists of nine separate hand-poured concrete shelves and is supported by welded steel frames. The cabinet is encased in glass and is 10 metres long.

The imposing presence of this work draws attention to the dislocation of a defining traditional practice – into an object of commercial exchange. Like the Nama and the Himba, the future of these people is extremely precarious. I believe their vulnerability exposes the human and environmental consequences of a gross domestic product (GDP)-centred pursuit of development, which defines our times.

The Ethiopian government is committed to an ambitious development agenda in a bid to improve food security for its densely populated and ever-expanding urban population – but rural land is consumed to drive this capitalistic agenda. The construction of the Gibe III Dam did not consider the impact such development would have on traditional pastoralist communities – disregarding their heritage, and without understanding the true value of this land.

Please talk us through the physical exhibition and the different elements that made up the installations and other works.

The layout of ‘In/Dependence’ includes a central installation, The Lip Plate Cabinet. The Cabinet represents a dam, a blockage, a reservoir, and calls into question the legitimacy of museums and collections. The surrounding walls sequentially depict defining aspects of the transition into dependence. One enters the exhibition under the discerning gaze of Kara royalty: I am Zino Ari is a charcoal portrait of the Chief of the Kara. The sculptures surrounding the Cabinet each represent the impacts of abrupt industrial agricultural development like River blind, a sugar cube mouthed bronze sculpture.

Lip plates are a consistent emblem in the work, as seen in The cut, a 2-metre high lip plate, made by coiling bending ply-wood, reinforced with aluminium sheeting, and painted. They are a component of the rite of passage into womanhood for Mursi women and remain exclusive objects of women. On the plates, fine lines and dots are painted with red ochre and chalk, forming geometric patterns. Some plates are perforated. Each one is unique. Considering the ethnographic authenticity of these plates is a compelling discussion – what is undeniable is that they are remarkable works of contemporary art. Portable and traceable, they contribute to the diversity of contemporary art emerging from the African continent.

The hanging photographic canvas lining the wall depicts a Mursi community, the remaining members of an entire village, which once numbered hundreds of people. At their feet lie over a thousand handmade glass yellow flowers. These flowers were produced in China through a collaboration with a Chinese glass artist. Amongst the flowers are 18 oversized bronze ‘devils thorns’. The blossoming of Chinese development is juxtaposed against a thorny land of desolate and barren villages.

On the opposite wall, young Kara men are captured in a state of transition between tradition and modernisation. Photographed in their classrooms and printed on aluminium sheets – the men with painted faces wear t-shirts – a break from tradition.

Your work is grounded in the people and the natural environment of the African continent. How does this project/body of work relate to previous subjects and bodies of work?

My exhibitions ‘Crossing the Line’ (2013), ‘I am’ (2015) and ‘Great Rift’ (2017), has been dedicated to the complex cultural, social, and economic issues surrounding the people and land of the Omo Valley. I also consistently expose issues concerning cultural authenticity and misconceptions of remote rural Africa.

As a contemporary artist, I am in awe of the art of these communities – they are the foremost mark makers on the African continent. With ‘In/Dependence’, as with all my work, I effort to showcase and celebrate the artistic contribution of traditional indigenous communities. My passion for the origin of sacred geometry is universal, however, I strive daily for the understanding and upliftment of the artistic heritage of Africa.