Robin Rhode: A Baptism of Choice

Robin Rhode is an established South African artist. Recently, he was the featured artist of the 2017 FNB JoburgArtFair and one of the artist featured in the exhibition, ‘Art/Afrique, le nouvel atelier’, at the Louis Vuitton Foundation.

In a world ground down by reductive absolutes, cynical essences, and crippling uncertainty, the artist that dares to scale this crux and find a way out is utterly remarkable. For there is no doubt that ours is a world corrosively divided. The obsessive-compulsive return to race, the chillingly exclusionary nature of identity politics, the ghoulish rise of populism, nativism, and the blind defiance of any inclusionary planetary humanism, has meant that today we find ourselves willingly entrapped in internment camps. Simphiwe Ndzube summarised our divided world in a 2016 work entitled Us and Them: Killer of the World.

In his essay, ‘Difference and Repetition. Reflections on South Africa Today’, published in 2017 by Fondation Louis Vuitton, Achille Mbembe warns us against a divisive and oppositional logic. “Unless we extend our imagination and properly articulate what must stand in lieu of what has been overthrown, we might end up privileging a politics of ruin over the politics of anticipation.” He then proffers the following wager: “We will have to rediscover the centrality of the social in any future-oriented political or economic project. We will have to learn how to not squander what belongs to the future generations and how to ring-fence what is commonplace, and therefore priceless, precisely because its value exceeds any forms of measurement (education, arts, culture, health care and imagination).”

Mbembe’s ‘future-oriented vision’ stands as a bulwark against those who seek to regressively enshrine a misbegotten absolutism, or those who choose to delinquently play in the killing fields of doubt. For Mbembe, life in all its dimensions – education, arts, culture, health care, imagination – asks that we foster a more wholesome understanding of our present moment and, all importantly, our future. It is this wager which Robin Rhode has placed centre-stage in the works created between 2016 and 2017, works which the artist has dubbed the ‘new optimism’.

Inspired by Pythagorean geometry, Rhode’s newest suite of works mark a seismic turn, for what is most striking about these new works is that they challenge both a reductive absolutism and a postmodern scepticism. In a career which began in 2000, Rhode has sought to undo the certainties which shaped the art world – the belief in the transparency of the object and the power of reason to explain its meaning. Rhode’s oeuvre has embraced the key tenets of a deconstructive universe – the arbitrariness of the sign and the erasure of absolutes – Until now. For what has emerged in recent years is the artist’s gnawing realisation that beneath and beyond the seeming arbitrariness of meaning lies some inconsolable yet trenchant power – faith. 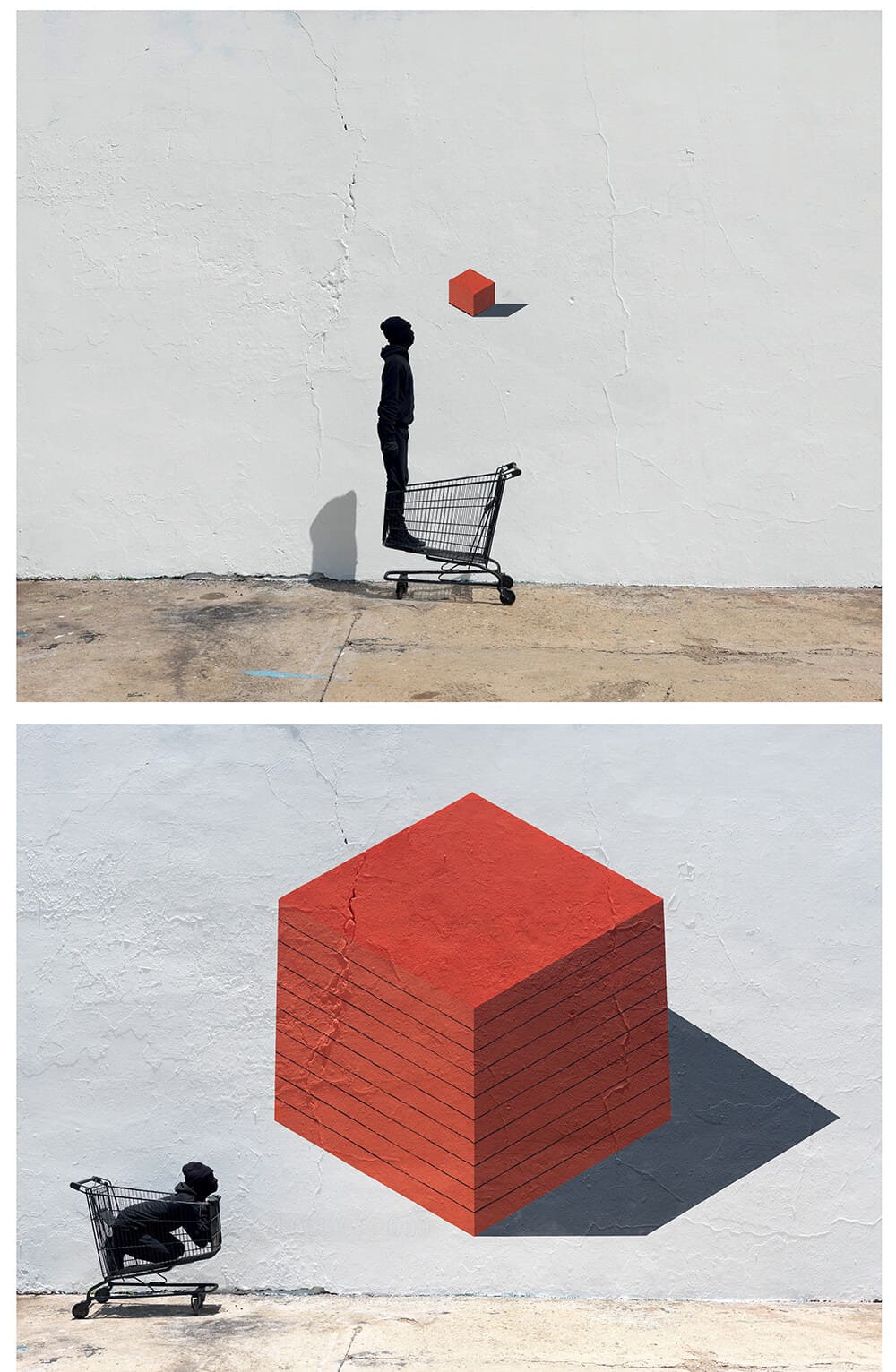 Long before the cool evasiveness of postmodern lore – Ferdinand de Saussure and Jacques Derrida – we find the thinking of Søren Kierkegaard, a man as sceptical, but for whom faith – the belief in God – could not be so easily dismissed. In his compelling concluding essay to Either/Or, “Equilibrium between the Aesthetic and the Ethical,” Kierkegaard returns us to a gnawing conundrum – how, despite scepticism, hold fast to the existence of God? The Danish philosopher’s conclusion, despite the fact that it may, rationally, be unprovable, is that we must choose. “Only when one can get a person to stand at the crossroads in such a way that he has no expedient but to choose, does he choose what is right.” It is this choice, forged at a ‘crossroads’, which Rhode has now powerfully revealed. Against doubt there is hope, against the spectre of a crude absolutism there is a leap of faith.

All importantly, the ethical and the aesthetic are not mutually exclusive. Rather, what matters is the way one fuses the two, and, in the fusing, reveals one’s truth. For it is clear that in this day and age Rhode can longer shirk the creeping realisation that art is neither the servant of the Church nor the hapless handmaiden of a compromised secularism. Something else – a third way – impels him, a way he has discovered, or recovered, through an exploration of a sacred geometry.

Everything is made of light, all matter is, and without matter there would be no sound. Atoms and planets arrange themselves in geometrical patterns. How profound then is a window, which allows the passage of light into an otherwise dark space. 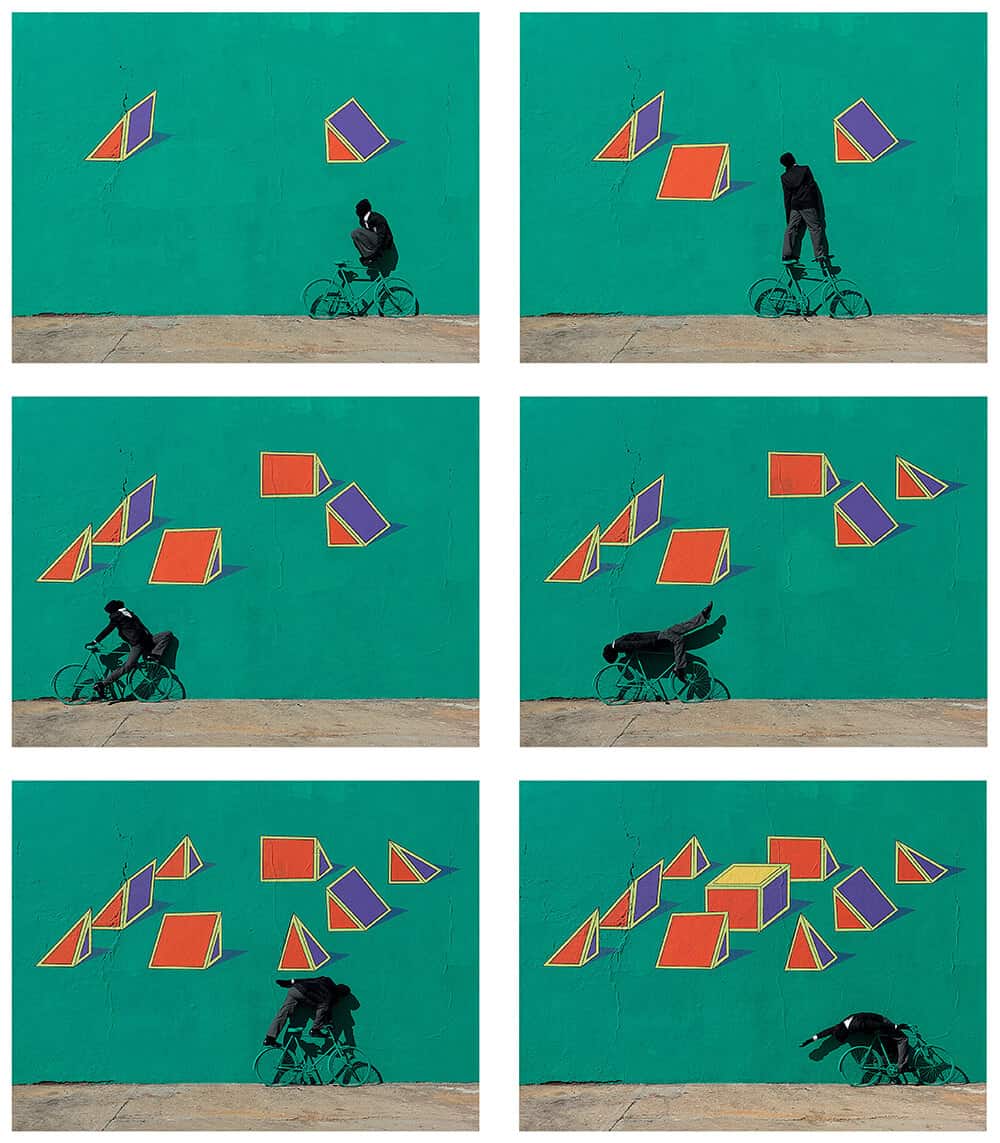 Geometry means ‘Earth-measure’ – it is a measure of our being in the world, a measure of whom and what we imagine ourselves to be in the world. There is doubtless a mysticism, a fantasy, which clings to this vision, however, and all importantly, it is a vision which, ethically and aesthetically, must refuse both the absolutism of monotheism and the scepticism of secularism. In Quadrivium: number, geometry, music, heaven, we read: “Everything is made of light, all matter is, and without matter there would be no sound. Atoms and planets arrange themselves in geometrical patterns. How profound then is a window, which allows the passage of light into an otherwise dark space.”

It is this ‘window’ which “allows … light into an otherwise dark space” that Robin Rhode has constructed. For as I’ve stated at the outset, ours is a world consumed by ‘a politics of ruin’, by overarching and dangerously misguided certainties, which has profoundly negated not only art’s complexity but also its simplicity. As Pythagoras has finely noted: “The function of geometry is to draw us away from the sensible and the perishable to the intelligible and the eternal. For the contemplation of the eternal is the end of philosophy, as the contemplation of the mysteries is the end of religion.”

“Einstein famously said that God does not play with dice. He was expressing a belief (a faith? A hope?) that the laws governing the universe have a deterministic rather than a probabilistic character. To most physicists today, Einstein’s notion of what constitutes a physical law seems a little naïve. Nevertheless, Einstein is a formidable ally to call upon for those whose suspicions about probabilistic statements and their explanatory value will not go away.” 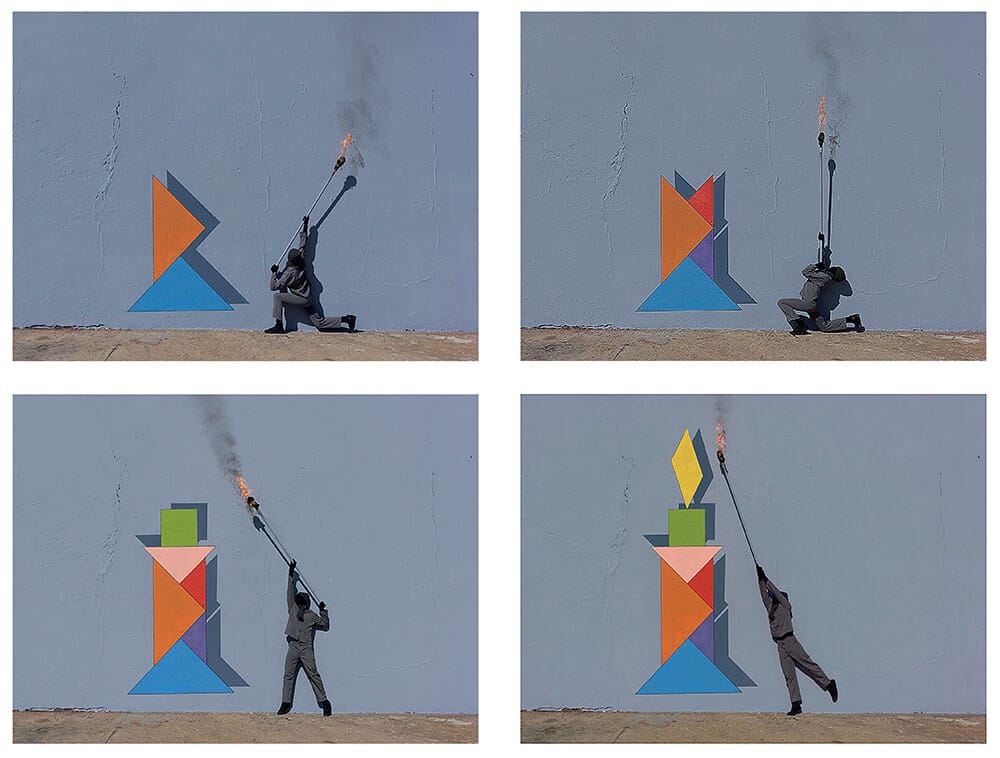 It is this finely honed formulation which I think cuts to the core of Rhode’s current exploration. Indeed, it is a formulation which defines the crux of our age. For as I’ve noted, we find ourselves drawn-and-quartered, split between two opposed visions of the world; one which seeks to lure us unthinkingly towards absolutism and its dark familiar, fascism, and another which seeks to hold fast to a bare-forked materiality, the ‘sensible and the perishable’. However Rhode, like Pythagoras, like Kierkegaard, seeks to wrench us away from both camps. For the ‘eternal’, the sacredness that is geometry, signals ‘the end of philosophy’ and ‘the end of religion’. These ends, however, are also a new beginning, “a window, which allows the passage of light into an otherwise dark space.”

This too is Achille Mbembe’s wager, for as the Cameroonian philosopher has also reminded us, to recover a world morally and spiritually in tatters requires that we hold fast to benign ‘mysteries’, that we recognise the insufficiency and dangers that beset the stark and lethal choices we are making, that we remain ‘future-oriented’. Robin Rhode’s newest works are the configurations of that future, the product of an ethic and an aesthetic which must, against all odds, sustain some state of grace, some well-being, some hope and optimism – some mystery – which for Kierkegaard amounts to ‘a baptism of choice’.