ART AFRICA‘s Robyn Sassen met up with South African artist Richard Smith to discuss his current exhibition, ‘New Paintings,’ at Ebony in Cape Town. Smith began his career as a cartoonist, producing work for The Sunday Times, Punch and the Harvard Business Review. His current body of work is testament to his versatility as an artist. In the interview, Sassen speaks to Smith about his transition into oil painting, the naming of his work and the power of the accidental. 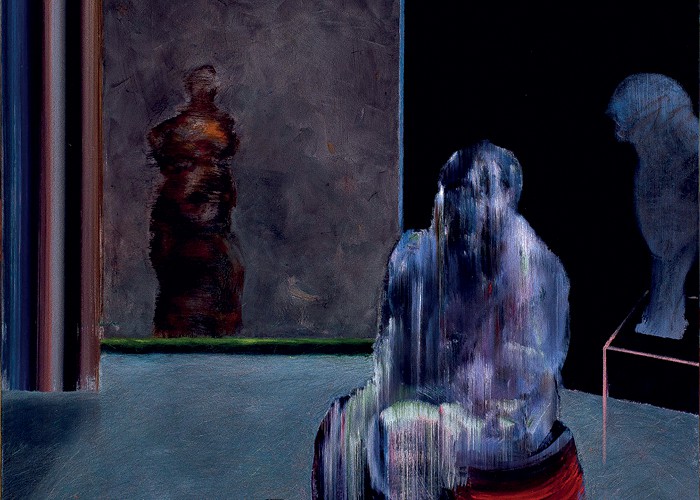 It’s the faces. Richard Smith’s extraordinarily large charcoal drawings of people who look you straight in the eye and mesmerise you. These intense works, created in South Africa from about 2005, became both a cornerstone to his approach and iconic enough to launch popular awareness of his work.

The trajectory of Smith’s career has been anything but predictable. Born in Scotland in 1947, he invented himself as a political cartoonist and was a regular contributor for publications such as The Sunday Times, Punch and the Harvard Business Review. In 1968, he studied graphic design at the then Johannesburg School of Art. Three years later, he exhibited drawings in London and by the mid-1980s he had joined the ‘stable’ of the Everard Read Gallery in Johannesburg, creating imminently sellable landscapes. An itinerate traveller with a honed sense of growth through curiosity, Smith is currently showing new work in a solo exhibition at Cape Town’s Ebony Design.

Robyn Sassen: Since 2005, your name has become synonymous with large but disrupted portraits in charcoal. In your current body of work, you digress completely from that rubric. Why?

Richard Smith: I think artists, in order to stay fresh, should move and avoid getting stuck in a rut. In my exhibition at Constitution Hill in Hillbrow (2005), I showed four or five of my large charcoal portraits. They developed whilst I was living in Greece and producing large charcoals of Greek sculpted heads from the Archaic Period. When I returned to South Africa, I decided to do the same thing with living people and interfering with the images by introducing elements like grids, icons and dots. At the same time, I also showed what I call ‘multi-panel composite pieces.’ It’s odd – people don’t really see these works when they’re shown with the giant portraits. I returned to painting in 2012, when I created a sixteen-piece installation of small oil on panel pieces to emulate the multi-panel composites. Next time around they grew bigger… and bigger.

Tell me more about your decision to work with oil.

My history with oil painting goes back to 1986, when Trent Read gave me my first show at the Everard Read Gallery (with Paul Stopforth and Hillary Graham). That show featured my present work in its infancy. I stayed with Everard Read for about fifteen years, painting formulaic corporate landscapes and portraits until I realised that that form of painting wasn’t really for me. My time at the Cité International des Arts in Paris in 1990 was a revelation for me. It was in this period that I started to experiment with mixed media and collage on paper. Back in South Africa, I sort of subsided into painting dull and boring landscapes – well , that’s what they were to me. 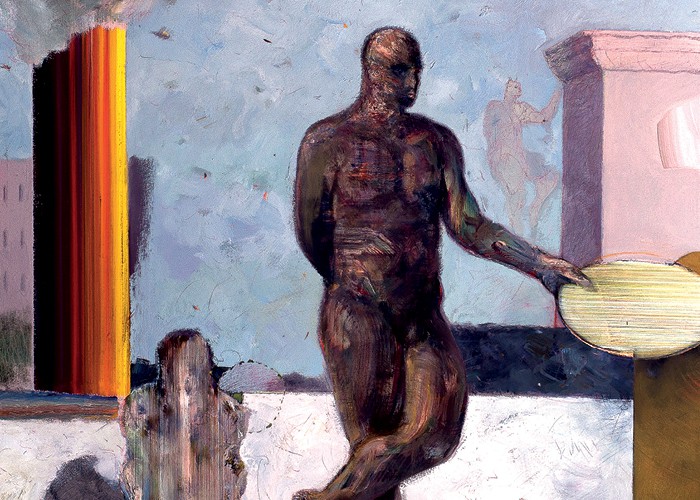 In terms of your prolific and varied oeuvre, this exhibition at Ebony is rather small (comprising only ten works). How did you come to exhibit with this gallery, and why the conservatism?

Marc Stanes, who heads Ebony, has a great eye and centers his appreciation of art and photography around really good design. I met Marc in Piketberg (South Africa) in 2012. I liked the way he spoke and I asked him to open my then-upcoming exhibition at the Irma Stern Museum. We’ve been doing things together ever since. He and I agree on a lot of things, one of them is the philosophy that ‘less is more.’ He says that he would rather ‘underhang’ a show for the sake of giving pictures more space to breathe; I agree with that. My paintings take a long time to reach completion.  Sometimes I’ll leave a picture for a month and then revisit it – and then it can wait another month. I may be prolific, but I don’t just ‘dash off’ new works.

Can you talk me through your transition from cartooning into fine art – did it present any challenges?

In my career I have made all sorts of two-dimensional art, from photography, silkscreen printing (in the 1970s) and airbrushing to charcoal, collage and painting. I don’t really see a distinction between fine art and any other kind of art, be it a simple line drawing, a cartoon or an oil painting.

One of the biggest challenges was to make the transition from cartooning or illustrating to ‘Fine Art’ with a capital ‘F’. Cartoonists have a wish to make ‘the great painting’ just as journalists have a wish to write ‘the great novel.’ Making a good painting is always a challenge to me, but it’s also a pleasure and a privilege. Painting is easy, painting well is difficult. 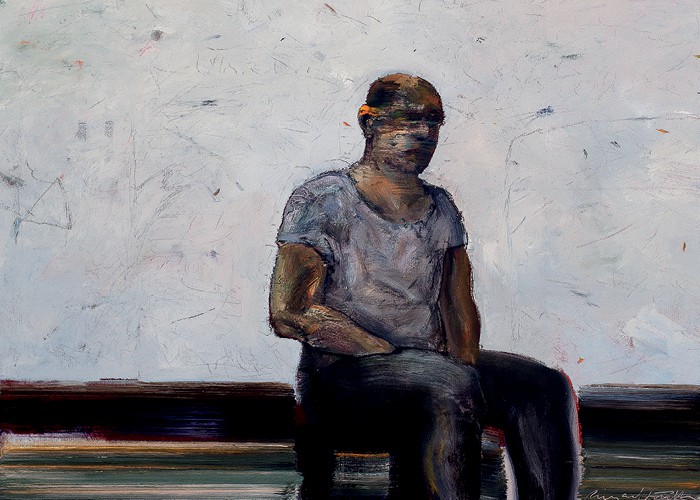 In titling your works, you reference history and politics. How do you reach the ‘right’ words to name a work?

The naming of a painting often comes during the execution of the work or after completion. There are no mistakes in my painting, only accidents. Nothing is planned. I believe very much in the muse.

The great Italian Renaissance artist, Leonardo da Vinci wrote in The Rules of Painting: “Look at certain walls dirtied with various stains or with a mixture of different kinds of stones. If you have to invent some scene, you will be able to see in them a resemblance to various landscapes adorned with mountains, rivers, rocks, trees, plains, wide valleys and hills. You will also be able to see various battles and figures in quick movements, strange expressions on faces, costumes and an infinite number of things which you can then reduce into separate well conceived form.” I do this all the time. My preferred mediums, charcoal and oil, enable me to see those “various battles and figures.” The oil or charcoal – applied applied quickly – dictate to me what is already there. I only really know what a painting is about after I’ve painted it.

Preparing for Sinai came to me as the first (central) figure appeared. A title will come to me and if I like it, I’ll stick with it. Sometimes the picture will evolve and change over time, so I might have to change the title. For me, Preparing for Sinai presents a Biblical scene, there was an element that evoked the parting of the Red Sea and I think that is what gave me the title … but that element is now gone. I still liked the title enough to keep it.

Sharkskins could also read as ‘Sharkskin Suits,’because the figure on the right of the picture is dressed in a very natty suit. To me, a sharkskin suit suggests bad business practice so you wouldn’t want to do business with the people in this picture. Again, the title comes to me in a flash and if I like it I keep it. It’s like automatic writing, so you’re right in saying that there is an element of surrealism.

Robyn Sassen is an Honorary Research Fellow at the Centre for Creative African Art at Wits University. Based in Johannesburg, she holds an MA in art history and freelances as an art, theatre, books and dance critic.