Guttural, instinctive mark-making tempered with controlled, aerial-view renditions of figures in motion, constitute a powerful series of paintings, installation and media work by artist Lonwabo Kilani in ‘Rope, Dope and Hope’ at the AVA Gallery in Cape Town. 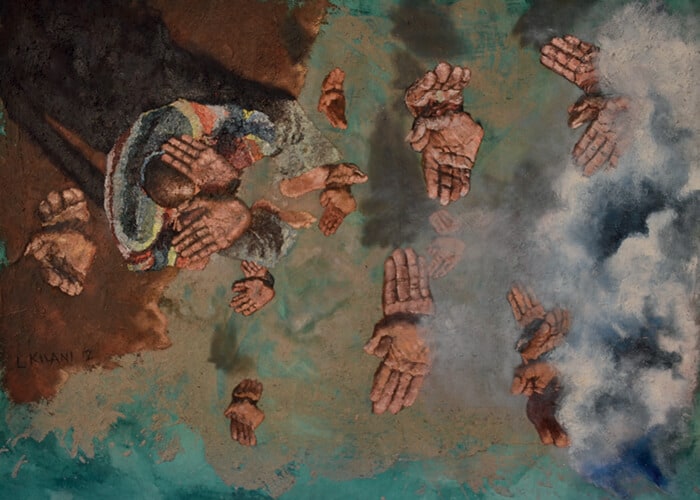 Lonwabo Kilani, detail of Duped. Mixed materials, 119 x 160 cm. All images courtesy of the artist and the AVA Gallery.

One is drawn to the rough surfaces of the paintings, unframed and untamed as it were. His method is consistent: canvases stained with wild colour, the use of sand and earth to build up the surface, a second hue overlaid and finally the more controlled pictorial imagery. There are also other clues: bullets circled, a thick plastic-covered rope and a multimedia video work made with images from his paintings. The result is at once angry and hopeful, as if the will to express gives tangible form to one’s discontent and, in the process, is healing.

This dual paradox is contained within the artist’s very intent – to give voice his personal dissatisfaction with local politics and its history, and further back into the history of slavery and colonialism in Africa. The rope is at once a plaything for children – reminiscent of skipping, jumping and fun – and an instrument to punish slaves, a shackling device that militates against humanity. Kilani has attempted to deal with the realities of the latter through images of a ‘crime scene,’ shadows that lurk and yet remain, demarcated so as to disallow intrusion. The artist has used foreshortening so that detail and intricacy form an interesting dynamic with the tattered, stained, splattered and con dent stretches of abstract colouration. 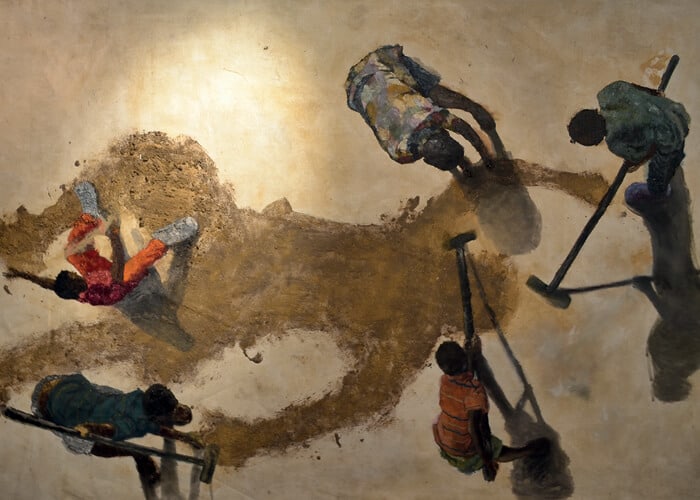 Of particular interest is Kilani’s focus on hands. They gesticulate and reach out. One is reminded of the ‘laying of the hands’ – a mechanism by which the deceased may be revived or at least move upwards toward the heavens – hands that are signs, a non-verbal language whose expressive intent is pre-verbal and yet may articulate what words often cannot. In his highly-charged video work, he uses his smaller framed works of hands in such a way that words (and then sentences) form as the frames and pace increase. And what does it say or mean? That one cannot deal logically with history. The animated hands portend to an emotional investment in the past that cannot be verbally articulated. In other words, one can almost sense the pain and torment, without necessarily knowing what transpired at the ‘scene of the crime.’ The artist gives sensual body to this through images of rats and cockroaches, remnants of the decomposing body, memories of a history which now only leaves traces and scars.

The video work neatly incorporates the images of hands with a boxing motif. This is apt, for it is in the struggle and potential suffering that the past is dealt with and through which we gain access. However, boxing is a sport (a kind of theatre and play-acting), as language (a system of signs) is a game created through arbitrary conventions. In this sense, perhaps one cannot actually come to grips with life itself, for even history is that which is constructed and written after the fact – and art, a mere reflection, becomes embroiled in other games, namely the art world or what is called ‘culture.’ In this sense, one is left wondering whether Kilani’s highly expressive, instinctive and original works can actually fight against prevailing iniquities or past injustices. On a positive note, his assured confidence through the visual language, his agitated drawing style and earthy colours, and his use of the shadow and struggling figures within a compositional unity, all appear to suggest that indeed art is not just a game (or shadow-boxing as it were). Art also trains us to see more deeply, and the culture it augments can ght social injustice and release personal anguish.

Based in Cape Town, Michaelis graduate Danny Shorkend continues to paint, theorise and write about art. He is currently completing a doctorate in art history through UNISA.