in News Articles 2013
Share on facebook
Share on twitter
Share on email
Share on whatsapp
The battlefields of Rorke’s Drift are world famous and one of the country’s most popular tourist attractions. However more recently another, quieter “battle” also took place around the Swedish Mission whose defence had seen much bloodshed in 1879. The story of the Anglo-Boer War battle is well known in our history books but the different battle some eighty years later was one which, unlike its predecessor, resulted in birth rather than death – the birth of an art explosion.
The Rorke’s Drift Art and Craft Centre spawned some of the greatest artists in our country and, in one of the strange quirks of history, was also the result of Swedish missionaries arriving in the country. 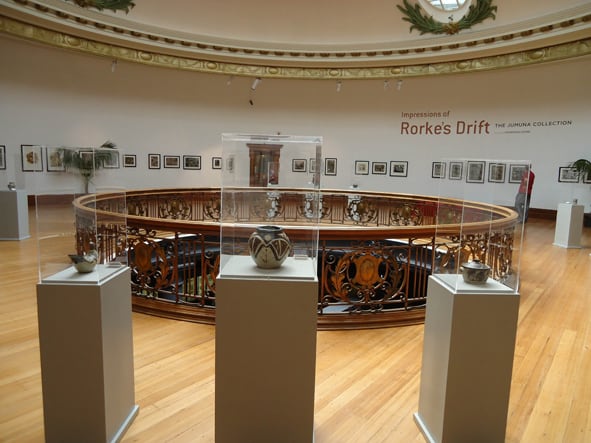 The concept of a battle around art may sound strange to the historians however the establishment of the Evangelical Lutheran Church (ELC) Art and Craft Centre by Swedish missionaries Peder and Ulla Gowenius in 1962 triumphed over the struggles which black artists were undergoing to create art in the repressive society of that time. This centre nurtured and gave a voice to many talented artists who were denied the opportunity to further their craft due mainly to the newly established Bantu Education policies.
The Centre concentrated initially on weaving and pottery and this soon mushroomed into a printmaking studio attracting mainly male artists from all over the country and even beyond its borders. These artists were finally given an opportunity to tell their stories through their art where images were a common language. Looking back now on the body of work produced here, we learn about the resilience, strength, imagination and even humour of the printmakers whose work now forms an important part of our cultural heritage. 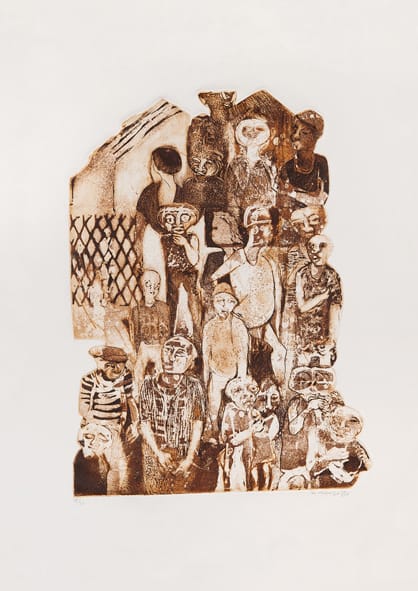 Work by Dumisani Mabaso.
Big City lights have always lured artists –a fact which makes the importance of Rorke’s Drift even more surprising. The green hills, peaceful environment and spaces for contemplation appear to have nurtured creativity and acted as a mecca for both city and country dwellers, although the Centre had to close in 1982.
The technique of printmaking itself is an ideal one to use to carry art to multiple destinations. It has often been called the most democratic of the art processes as original prints are able to be made in (limited) numbers thereby being accessible to multiple venues and audiences often at the same time. However in order to achieve excellence the printmaker needs sophisticated equipment to make works using screenprinting, lithography and etching all of which require expensive presses to print plates, stones and screens
Two art centres (Rorke’s Drift and Caversham Press), both models of excellence, over the period of some fifty years of political turmoil in the warm, green and abundant rural landscape of KwaZulu-Natal. How did it happen? What alchemy is in place to encourage this extraordinary creativity? Unanswerable questions … but let the art speak for itself. 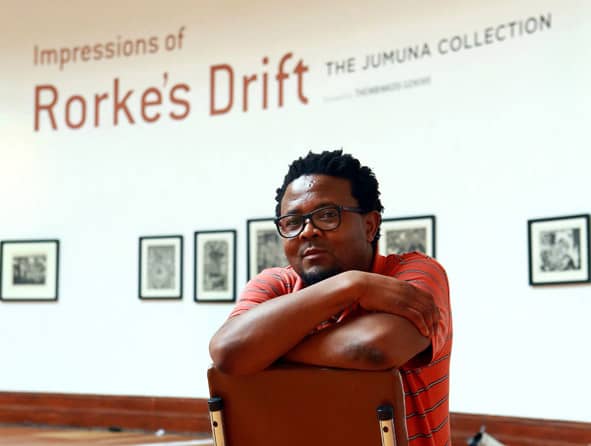 Thembinkosi Goniwe, curator of ‘Impressions of Rorke’s Drift’
‘Impressions of Rorke’s Drift – the Jumuna Collection’ runs at Museum Africa in Johannesburg from the 9th March – 25th May 2014 after a well received run at Durban Art Gallery. The exhibition is curated by Thembinkosi Goniwe and is funded by the National Lottery Distribution Trust Fund. For more details contact craig@kizo.co.za
Text by Carol Brown; an independent curator, artist and art consultant, based in Durban.
Courtesy of Illa Thompson, Publicity Matters