Matthew Hindley has extended his series of paintings, entitled ‘Resurrection’ exhibited at Everard Read in Cape Town last year with its focus on fire and destruction in a new body of work and has developed a slightly different stylistic methodology. His most recent body of work, ‘Ruin Lust’ at Everard Read in Johannesburg explores the fascination, even aesthetic beauty, associated with violence, explosions, and bomb blasts. In conversation with the artist, what became evident is that in his steering away from the merely ‘pretty,’ the artist wishes the viewer (and he himself) to confront the shadow side; that a recognition of one’s lust for violence and chaos may in fact be cathartic. Tragedy in art may ironically lead to healthier or more profound living.

His style, culled from his work in dry point with David Krut projects in Cape Town, consists not only of his usual exceptional colour modulation – especially evident in his close observation of fire – but it is the criss-crossing of line or cross hatching that reminds one of both Goya and Van Gogh’s drawings. Yet his mark is decidedly contemporary. The images are often drawn from or inspired by film, social media, and applications such as instagram. In this sense the ‘realism’ of the work is ‘hyper real.’ This reflects the often unreality of images themselves for they are mediated by the photographic lens, by the cognitive and consequent visual bias of the viewer him/herself, and a host of constructions and non-transparent devices such as the television, the media corporation, and in fact the lens of the eye itself! In these respects, his paintings (and drawings) reflect both an imaginative world – and an alluring one at that – as well as a kind of documentation of historic fact or more ominously, possible futures. Of course, fire is not necessarily negative. It may be used for cooking, cleansing, cremation, and the conscious effort to destroy in order to subsequently rebuild. 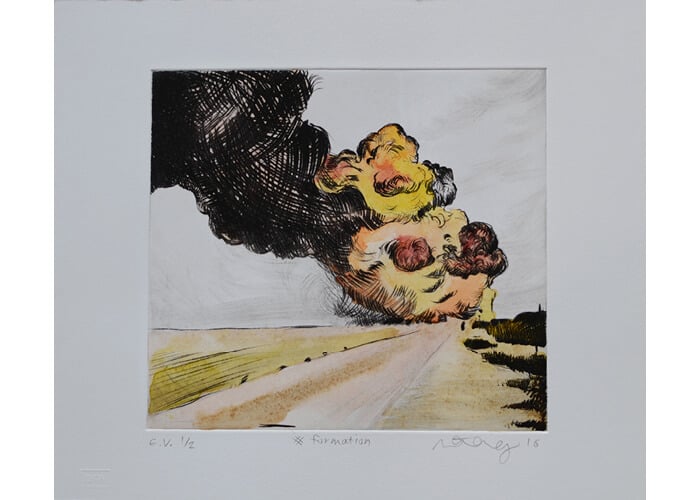 The ‘unreality’ and ambiguous meanings abound if we further consider Hindley’s alternate use of modern buildings and classical Western structures. This in turn calls to mind the question concerning whether the artist simply metaphorically alludes to the deconstruction of the values and identity of the West (assuming there is a monolithic West as such) and the Classic ideal, that destruction may lead to a more harmonious, all-inclusive culture. This is a poignant goal in the context of Africa. On the other hand, the clean, well-drawn Western Classical structures appear to subsist despite destruction, tyranny and impending doom. 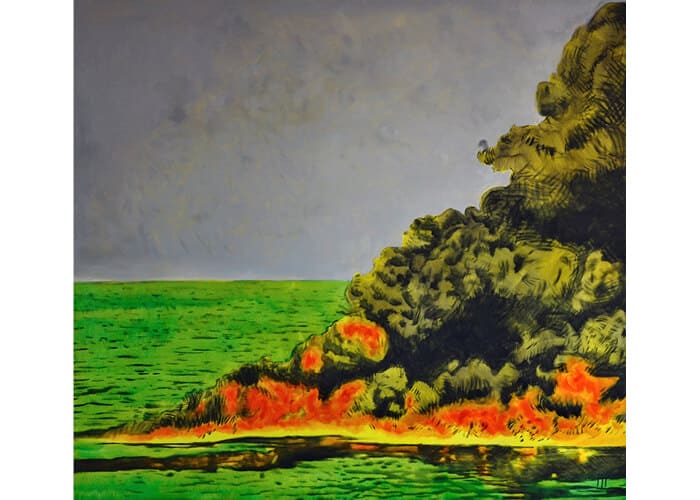 Billowing clouds, plumes of smoke, luminescent surfaces and often the resultant wasteland that follows destruction, suggest that the aesthetic appeal of violence is pernicious, that somehow the will to vanquish is as strong as the desire to bind disparate elements – to seek and find peace.

This dialectic means that it is only conscious effort and the need to, as it were, lust for life that may secure victory over the other side, that sleep of death. The artist lures us into a world where we need not fear that ‘other side’ and indeed, by finding beauty in that, one completes the circle. That is, a kind of Zen-like equivalence of good and evil. Does this offset the victory of the so-called good, the true and the beautiful? No, for it is precisely the ebb and flow of creation and destruction – a Shiva like dance – and that is evident in the art-process itself now creating, now destroying and starting over. This view of creativity also engenders a more critical, examined and questioning ethic with the acknowledgement that aesthetics is somewhat a-moral. That in itself may encompass or resolve itself into – quite paradoxically – a peaceful harmony in life proper. Eventually.

Based in Cape Town, Michaelis graduate Danny Shorkend continues to paint, theorise and write about art. He holds a DLitt et Phil in Art History through UNISA.