in ABSTRACT, AFRICAN ART, ART FAIR, BEADWORK, EXHIBITION, GALLERY, IDENTITY, INTERVIEW, MIXED MEDIA, TEXTILES
Share on facebook
Share on twitter
Share on email
Share on whatsapp
As one of Uganda’s most universally acclaimed artists, Sanaa Gateja has, over the years, earned the nicknamed ‘The Bead King,’ a title derived from his process of making beads from recycled paper which he uses to create various designs and compositions. Presented by Afriart gallery (Kampala) as part of the FNB JoburgArtFair‘s special focus on East Africa, Gateja’s work ethic and preference for recycled materials suite the global consciousness which highly regard the environment and its preservation. Gateja’s artwork could be described as mixed-media experimental abstract art. ART AFRICA spoke to the artist about his latest body of work PATHS, which explores aspects of African history as a journey, incorporating a variety of elements from Barack Obama’s presidential campaign posters to bark cloth. 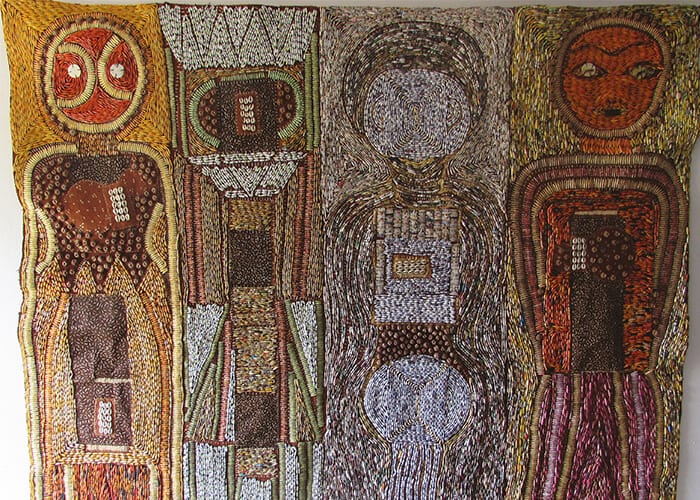 ART AFRICA: You opened your own gallery in Mombasa, Kenya in the 70s, called Studio Sanaa. Were you a practicing artist at the time?

Sanaa Gateja: I was twenty years old and in my formative years as an artist. My studio was located in a square facing the gates of the Old Town Mombasa, Dhow Harbour. I had access to art from Zanzibar, the Persian Gulf and India, as well as from the continent’s interior. The gallery showed contemporary art by artists living in Mombasa and beyond. I was privileged to sell whatever took my fancy, be it art, antiques or simply interesting designs for home décor. Studio Sanaa was the first art gallery in Mombasa with a workshop/studio for design and renovation.
The studio exhibited a wide range of work, including crafts. You’re also a qualified Jewelry and Interior Designer. Do you make any distinction between art and craft?
I sold Sanaa Gallery and enrolled in an Interior Design correspondence College called Rhodec International (Brighton, UK) for a year, after which point I joined The International University of Art (Florence, Italy), where I did Jewelry and Design. I do not make distinctions between art and crafts. 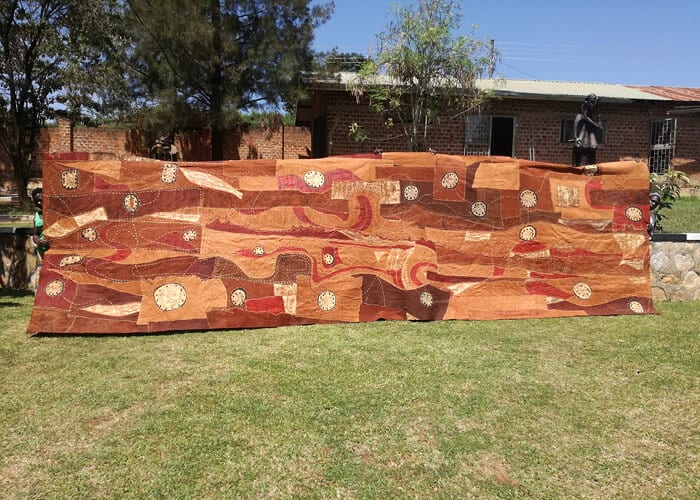 In 1990 you developed a bead made from recycling paper. This technique is now used quite widely in East Africa, and has been the source of many livelihoods. How do you view the relationship between commerce and art?
In a country where there is a large population of unskilled people, art becomes a good source of entrepreneurship – materials are manipulated into unique products that can be produced by hand repeatedly. My work involves a technique I call ‘unit construction,’ employing people I have trained as fabricators. It is labour intensive. The work is done by women and youth who I pay for the units made. I will then create individual works of art from the units by constructing them in many fashions.
In an interview with Start journal, you mention that you view your artwork as a celebration of life and family, something you can look back on fondly. With this in mind, do you ever re-visit or change works?
My work deals with a very wide theme. ‘The African Journey’ provides commentary on what makes Africa tick. It is very much inspired by history, events, and people that have caused a change in direction on the continent. For the next year I am dealing with the legacy of a Scots-man called Alexander Mackay, who made an impact on Uganda through new skills as a missionary. 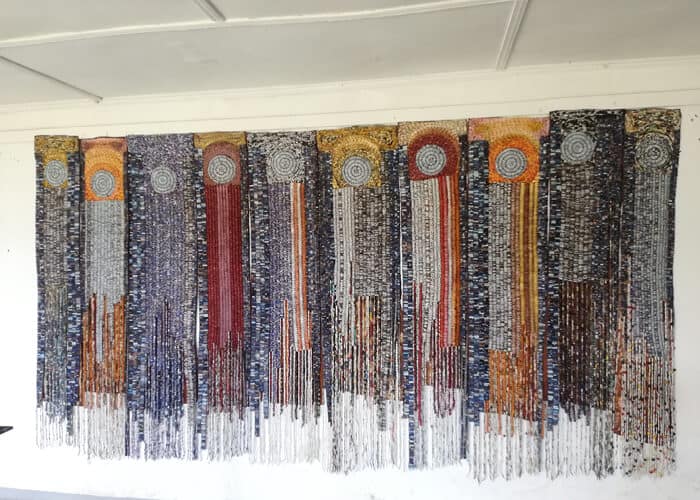 Presented by Afriart Gallery, Kampala, you have produced two large-scale, site-specific works for the FNB JoburgArtFair. Please tell us about these works, and what inspired them?
My current project, ‘The African Journey,’ deals with aspects of African history as a journey. With limited written material available (especially that written by Africans), art remains a significant source of historic information. It is even more significant when oral history is so diverse in its story line. Imagination and creativity become very important in how one tells the story. As a mixed-media artist it is always my pleasure to meet different challenges.

Size is a challenge that stretches material to its limits. The decision to make large works can be equally demanding in the thematic approach. The two large works I have submitted for the FNB JoburgArtFair are both under the theme ‘PATHS,’ and are made from bark cloth.

The bark cloth tree has many names in the Great Lakes Region: ‘Mutuba’, ‘Mutooma’, ‘Muvumu.’ It is an environmental miracle tree of the Ficus family. The tree produces skin up to four times and has medicinal advantages for both humans and animals. This leguminous tree is fodder for animals and will grow to full size within three years.
I have used different bark cloth lengths to make PATHS 1, the single largest work I have ever made. PATHS 1 is a geographical sketch of an African landscape, documenting the many pathways where adventurers visited, explorers were named, wars have taken place, missionaries built churches, mosques and shrines, the homesteads where presidents were born, where animals lived and died… It is a living path that remains in our minds when we think of life – the Sun, Moon, Earth, and Water.
PATH 2 takes us on a journey of an individual who has made recent history. The work is partly made of Barack Obama’s first presidential campaign material of 2007; paper, recycled into beads. The work shows many aspects of his campaign and brings him back to Africa, for Africa always claims its children back in body and spirit. In this sense the work is a Talisman.