in News Articles 2013
Share on facebook
Share on twitter
Share on email
Share on whatsapp
‘Senses of Time: Video and Film-Based Arts of Africa’ opened at the Los Angeles County Museum of Art (LACMA) on the 20th of December 2015. In an opportunity made possible only by the new realities of time-based media, the exhibition will appear simultaneously at two additional venues. It opened at the Smithsonian’s National Museum of African Art on the 18th of May 2016, and at the Wellin Museum of Art in Clinton, NYC on the 10th September 2016. Each venue differs with the inclusion of an additional artist’s work. LACMA features six works of art by Berni Searle (South Africa), Moataz Nasr (Egypt), Theo Eshetu (Ethiopia), Sammy Baloji (Democratic Republic of the Congo) and Yinka Shonibare MBE (Nigeria). To these, the Smithsonian will add South Africa’s Sue Williamson and the Wellin will add Jim Chuchu from Kenya. 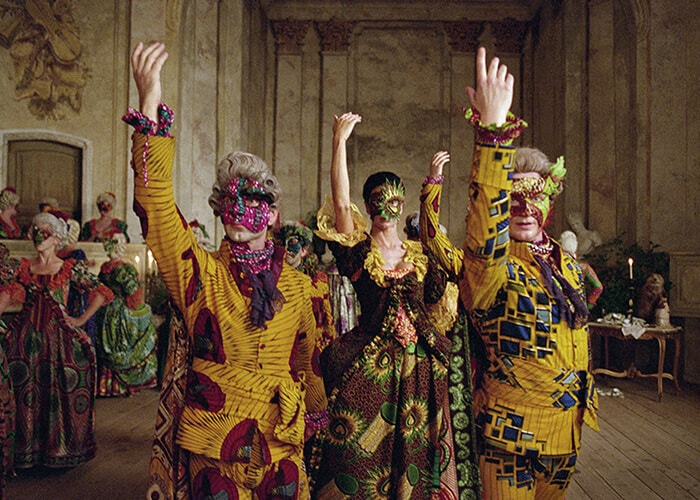 Yinka Shonibare, detail of Un Ballo in Maschera (A Masked Ball), 2004. High definition digital video, duration: 32 minutes. Courtesy the artist and James Cohan Gallery, New York and Shanghai. © Yinka Shonibare MBE. All Rights Reserved, DACS/ ARS, NY 2015.
Our hearts beat to the rhythms of biological time, continents drift in geological time and we set our watches to the precision of Naval Observatory time. It may seem easy to measure, but time is challenging to understand. Leading contemporary artists featured in ‘Senses of Time’ explore how time is experienced – and produced – by the body. Bodies climb, dance and dissolve in the exhibition’s offering of video and film – or ‘time-based’ – art. Characters and the actions they depict repeat, resist and reverse the expectation that time must move forward relentlessly.
Motivated by a desire to demonstrate that time is never neutral and is always a construction, the featured works express time’s movements as personal, cultural and political. For the artists in this exhibition, time and time-based media are powerful devices for challenging stereotypes and addressing issues of race, identity, political corruption, family, faith and future. The layering and juxtaposition of riveting imagery counters misperceptions – fueled by colonialism – of Africa as ‘outside of time,’ and demonstrates that time is often a sensual, corporeal and personal experience. Breaking cultural divides, these artists use the eloquence of the body and harness time’s relativity in order to explore tensions between personal and political time, ritual and technological time, and bodily and mechanical time. Through pacing, sequencing, looping, layering and mirroring, diverse perceptions of time are both embodied and expressed.
Yinka Shonibare MBE’s European ballroom dancers – dressed in sumptuous African print-cloth gowns – dramatise the absurdities of political violence as history repeats itself, while Sammy Baloji choreographs a haunting exploration of memory and forgetting in the ruins of postcolonial deindustrialisation. Sue Williamson sensitively highlights generational gaps wrought by time, while Berni Searle addresses the slippages and fragility of time as ancestral family portraits dissolve before our eyes. Moataz Nasr’s work treads upon personal identities distorted by the march of time and Theo Eshetu draws us into a captivating kaleidoscopic space where past, present and future converge. Jim Chuchu negotiates the tensions between individual experience in the here and now and participation in timeless ritual. Distinct in their visual language and style, each work of art heightens awareness of the variations in the production, experience and tactility of time. 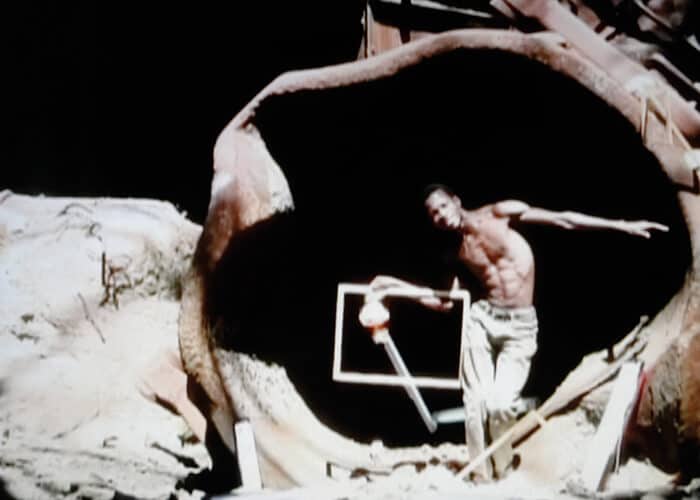 Detail of Mémoire, 2006. Edition of 3, video for projection, duration: 14 minutes, 30 seconds. National Museum of African Art, Smithsonian Institution, museum purchase, 2012-6-1. © Sammy Baloji. Courtesy of artist and Axis Gallery, NY/NJ.
ART AFRICA: Where did the inspiration for ‘Senses of Time: Video and Film-Based Works of Africa’ originate?
Karen Milbourne & Polly Nooter Roberts: Karen Milbourne was invited to convene an international colloquium on ‘Time and Temporalities in African Art,’ at the Sterling and Francine Clark Institute at Williams College in Massachusetts. Polly Nooter Roberts participated in this colloquium, given her longstanding work on time and memory in relation to Luba arts of the Democratic Republic of the Congo. One of the artists in the LACMA presentation, Theo Eshetu, as well as Sue Williamson whose work will also be included in the Smithsonian National Museum of African Art, also participated. This led to numerous conversations about time, time-based media and exhibition possibilities. The curators were strongly influenced by such theorists as Laura Marks and her discussion of “haptic visuality” and the capacity of eyes to work like “organs of touch” in relation to intercultural cinema. This led to our focus upon the body as a vehicle that not only experiences the different rhythms of time, but can produce concepts of time as well.
The exhibition features the work of just five contemporary artists from Africa and six works of video and film. How did you end up choosing such a small selection of artists and works on such a broad topic – and why these five artists specifically?
We intentionally selected extant works of art. These are not works of art created in response to a theme conceived by the curators; rather, the artists’ visions were already speaking to the theme and we harnessed their voices to reveal different aspects of time and how it is embodied. Yinka Shonibare was a real starting point with his juxtaposition of a beating heart, breathing and footsteps – bodily time, if you will – with the sweep of historical time. Sammy Baloji also mines history with the voices of Lumumba, Mobutu and other ghosts of Congo’s past, but he worked with choreographer/dancer Faustin Linyekula to show that this history is not just about the past but moves in the present. As he says, Faustin feels the pressures of this past but is not crushed by it, he is responding to it. Mémoire is about the present and future as much as it is about the past. Berni Searle also poetically explores how the past can only be experienced in the present, for generational time may fade. She eloquently resists notions of the relentless progression of time in the way that her works dissolve, repeat and loop. Moataz Nasr also takes on the fragility of time, just as Theo Eshetu entices us to consider the overlaps and disparities between ritual and technological time. All of these artworks are about time. And they explore time using the vocabulary of bodies and the senses. They are not the only works to do so – there are also powerful works by William Kentridge, Jim Chuchu and others – but they all work together. And together, they offer an extraordinarily sensual and thoughtful experience for the viewer. 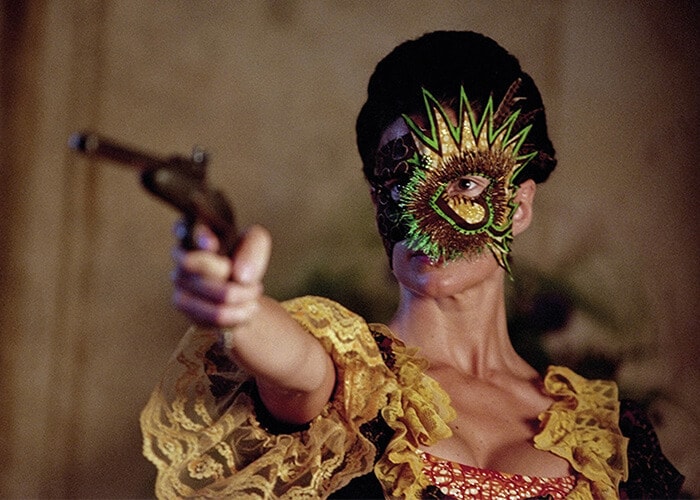 Yinka Shonibare, detail of Un Ballo in Maschera (A Masked Ball), 2004. High definition digital video, duration: 32 minutes. Yinka Shonibare MBE, Courtesy the artist and James Cohan Gallery, New York and Shanghai. © Yinka Shonibare MBE. All Rights Reserved, DACS/ ARS, NY 2015.
Artist Yinka Shonibare is quoted as having said that “in painting I may layer colour, but in video I layer time.” Could you elaborate on this statement with regards to the themes of the exhibition?
There is, of course, the obvious answer that Shonibare is moving his trademark style across the ticking seconds of the recorded image, but Shonibare is always so much more than obvious. He is consciously layering corporeal and technical time, political and art historical time, museum practice and visitor experience in the here and now. The action in Un Ballo in Maschera repeats itself in a direct reference to the practice of looping videos within galleries, and a conscious nod to Resnais, Godard and French New Wave film. He also draws upon the assassination of Sweden’s Gustav III as a parable for 21st century political hubris. He’s drawing attention to history repeating itself instead of as a progression, and in doing so he unsettles ideas of the West as progressive (moving forward) and Africa as ‘traditional’ (repeating practices) by revealing that the West has its traditions, too. With his usual cheeky style, he also points to the incredible inventiveness and range of ‘traditions,’ like masquerades. His ability to layer time is endless!
The permanent collection of art from Africa at LACMA comprises traditional works of art from countries including the DRC, Burkina Faso and Nigeria. Does LACMA plan to expand this permanent collection to include any contemporary works going forward?
Yes, in just the past few years, LACMA has made some major acquisitions that herald a dedicated initiative to expand the collection of both traditional and contemporary works of art from Africa. Among recently acquired works are masterworks by contemporary artists including Magdalene Odundo, Julie Mehretu, El Anatsui and William Kentridge. Evocative ceramics, time-based film and video, mixed-media installation arts, sculpture and paintings reflect the ongoing dynamism of African expression on the continent and in its diasporas. What is so exciting about LACMA’s African art collection is its extraordinary potential to teach about the depth and richness of Africa’s diversity of cultures and peoples, and to convey senses of beauty and knowledge from multiple artistic perspectives. The collection has a strong foundation that is ripe for future growth. 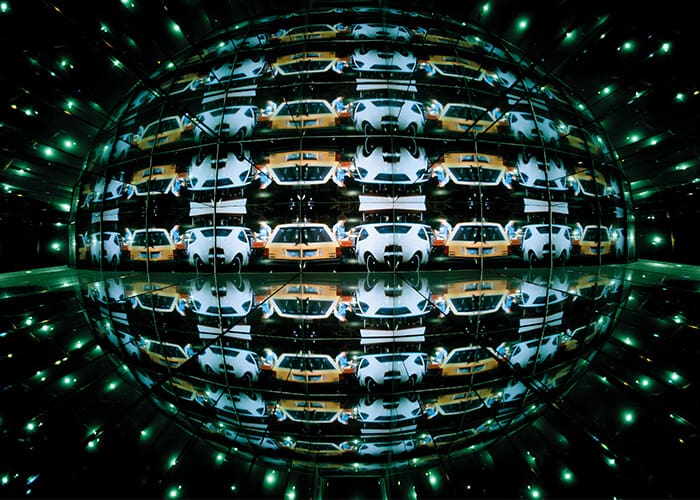 Theo Eshutu, detail of Brave New World II, 1999. Multi-media and video installation, duration: 35 minutes, 30 seconds. National Museum of African Art, Smithsonian Institution, museum purchase, 2008-7-1. © Theo Eshutu. Courtesy the artist and Axis Gallery, NY/NJ.
Do you foresee future editions of ‘Senses of Time: Video and Film-Based Works of Africa,’ or perhaps any other exhibitions centered on the same themes?
Yes! The exhibition is also appearing at the Smithsonian National Museum of African Art with the addition of There’s Something I Must Tell You by Sue Williamson and at the Wellin Museum of Art with Jim Chuchu’s Invocation: Severance of Ties and Release. In addition, Karen would love to develop another exhibition that looks at the theme of time across media; and Polly is planning to continue her explorations of art and temporalities through a major 2017 exhibition at LACMA entitled ‘Vision and Transcendence in African Art,’ that will explore ways that African works of art transport us through time, spiralling from past connections to future states of being and the afterlife. 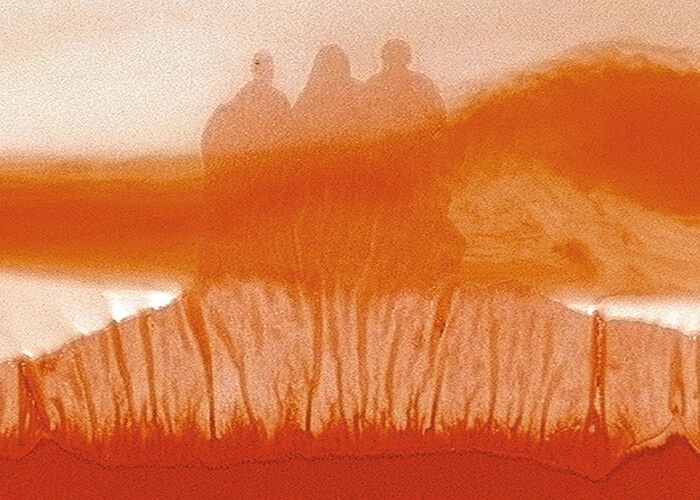 Berni Searle, detail of About to Forget, 2005. Three-channel video projection. Shot on 35mm cinemascope film, transferred onto flashcards. Duration: 3 minutes. Edition of 5, 1 AP. © Berni Searle. Courtesy of the artist.
Senses of Time: Video and Film-Based Works of Africa’ will be showing at the Los Angeles County Museum of Art (LACMA) until the 2nd of January 2017.