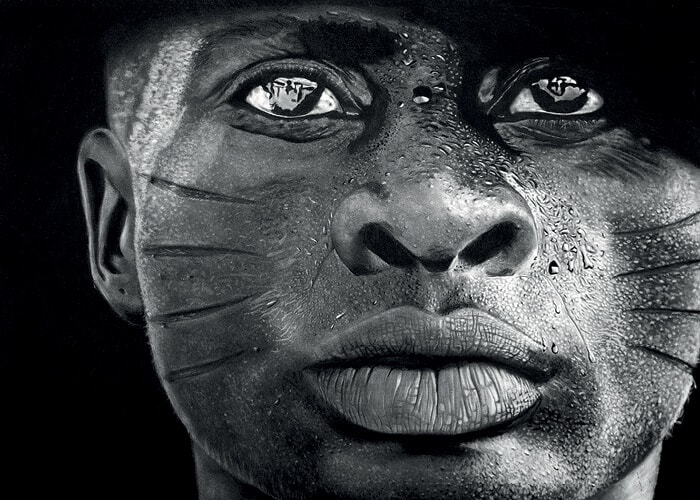 Babajide Olatunji, detail of Tribal Marks Series I #1, 2013. Charcoal on Paper, 49.5 x 63.5cm. All images courtesy of the artist and TAFETA, London.
It has been quite a year for artist Babajide Olatunji; a show in London, presenting at Art Hamptons, steady sales and growing media attention. It was his breakout ‘Tribal Marks’ show that marked the young Nigerian artist as one worth watching – a series of eight hyperrealist portraits exploring the practice of facial scarification in contemporary Nigeria. For those of us fortunate to be at the intimate Mayfair show, the buzz was unmistakable – second and third looks were commonplace. The red dots accompanying the highly accomplished works, executed in the unforgiving medium of charcoal, confirmed this.

None of Olatunji’s subjects exist in reality – rather, they are fictional characters drawn from his imagination, of which “an endless range of possibilities exist.” Characters are conceived complete with their own personalities, biographies and in some cases medical histories, and the morphological characteristics of each sitter are the result of years of studying faces. When viewing these large-scale portraits, what is staggering is the attention to detail employed by Olatunji. The faded scars, leathered skin, soft downy hair or rheumy eyes that make up each unique portrait reveal the dexterity of the artist. There is a discipline to his work as he faithfully recreates what his mind has already conceived. These people feel familiar and unfamiliar at the same time. 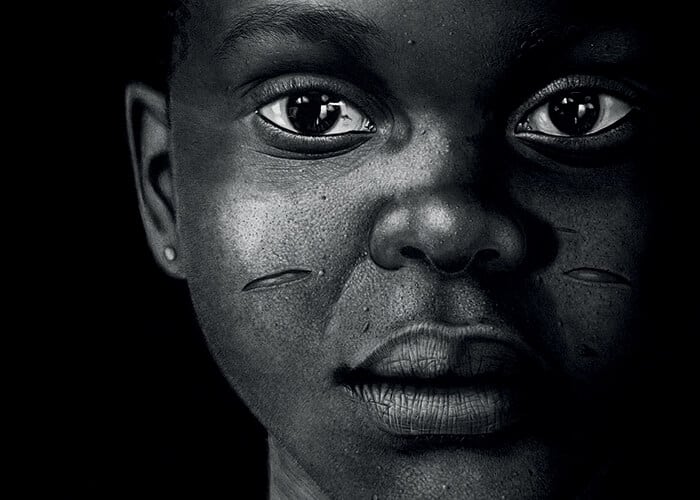 Incredibly, Olatunji is self-taught, with no formal training in the arts (in fact he graduated as a botanist). According to the artist, his technical proficiency in drawing was borne out of necessity. Art was a hobby until the loss of his father left him relying on portrait commissions from his peers and lecturers to pay his way through university. Competition from other pencil artists on campus meant having to practice or starve. Hunger was the primary motivator. So has the reaction to his work taken him by surprise? From Olatunji there is a qualified yes. Reflecting on the fickleness of the art world he adds, “We know of masterpieces adorning the walls of the Louvre today that were once ridiculed and rejected at the Paris Salon in their year.”

While the practice of facial markings has waned in Nigeria, the effects of scarification were once highly valued amongst participating groups. Body and facial patterns made it possible to identify one group from another, and also define social rank. Markings could reveal royal bloodlines, slave status or familial ties. In understanding the historical significance of facial scarification, there is much to appreciate in Olatunji’s strive to archive various facial marks from the past, and their relevance or indeed nonrelevance in modern Nigerian society.

It is fair to say that Babajide Olatunji is part of a new crop of young African artists who are gaining traction as international interest in contemporary African art grows. Represented by London-based art dealers TAFETA, he clearly has a bright future ahead; much is promised and expected from this incredible talent. Untroubled by the weight of expectation that early success has brought, Olatunji is still anxious to prove himself. If there is a burden, he says, “It is of a fear that this lifetime might not be enough.”

Eri Otite writes about the contemporary arts and is based in London.