A glorious fleshy mash up By Anna Stielau 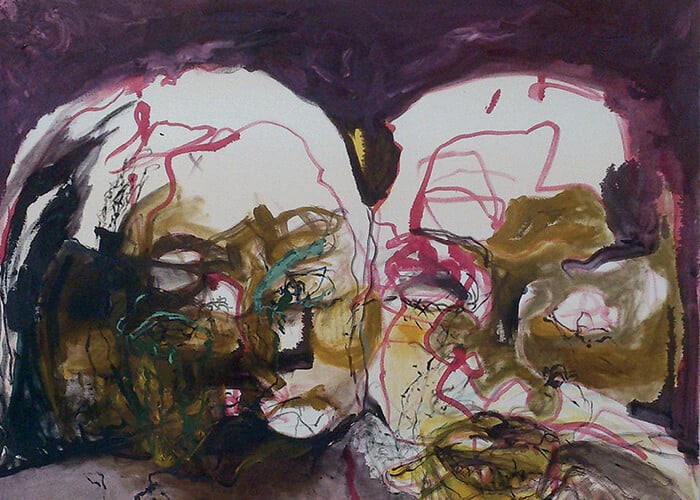 
In Chemu Ng’ok’s imagination (made flexible, she tells me, by a steady diet of science fiction and magical realism), bodies and walls and worlds are equally permeable. Her mobile landscapes are littered with figures that bend and twist around and through one another in a glorious fleshy mash-up. Although the influence of sci-fi is certainly present, what forces the subjects of her paintings into new shapes is something strangely mundane: the affective charge that undercuts human relationships.

Art has always been tied to relationships for Ng’ok. As a child in Nairobi, she insisted that guests in her family home “draw themselves, draw a house, and draw [her]” whenever they visited. Each time, the ‘me’s, the ‘you’s and the ‘here’s would be different. Now an MFA student at Rhodes University, the vocabulary she acquired to describe heterogeneous human experience seems to be serving her well. Taking the “dynamic space of relationships” as her primary point of departure, Ng’ok derives enormous creative energy from interrogating the tensions that contour interpersonal interaction; as she puts it in a text accompanying her undergraduate show, those “light brushes of consciousness that are present in the air between us.” These light brushes are made palpable in her paintings. The space between her subjects is pregnant with them. The artist describes her signature style – a dynamic thicket of expressive brushstrokes – as “drawing” on canvas, but she is reluctant to pin it down further. “I’m a process painter,” Ng’ok explains, “I paint as I think about the composition and layering and how I feel about the work… I stop when it feels right.” Blending a strong figurative sensibility with an undertow of gestural abstraction, her finished works are like a fever dream, reeling, crowded and hot. In many of them, there is a hint of something cataclysmic in the recent past or near future, some terrible event that has rent apart planes of colour and twisted lines out of shape. Here a head reels on an impossibly long neck, eyes rolling as if from a blow; there two beings collide in an explosive kiss that fuses them together. It’s no wonder that her current body of graduate work foregrounds the riot as a social form. Ng’ok makes a battleground of her canvasses. 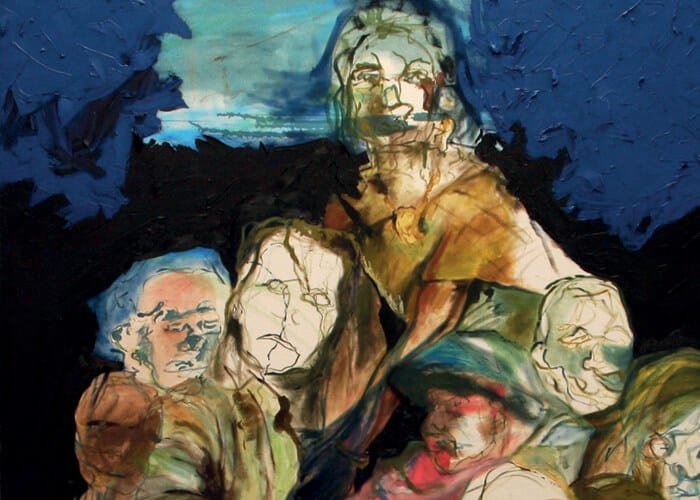 Take The Climb (2015), recently exhibited at the Goodman Gallery, Cape Town as part of the ambitious group show ‘Speaking Back.’ In this intimidatingly scaled work, a pyramid of bodies towers over the viewer. Those at the base bow under the struggling weight of those above. Partly in silhouette atthe pyramid’s apex, a female figure gazes out at the viewer, her face unreadable. Around her, black paint pours from the ruins of the ragged blue sky. The work intimates a struggle for power, although who’s power and why remain unclear.

Therein lies much of the punch of Ng’ok’s practice – she takes a human experience, individual or collective, and expertly transports it into the realm of the allegorical and the mythic. There is no Capital-T-Truth here, no easy logic. The artist’s interest, it seems, lies less in inferring answers and more in asking questions. Where does real life end and interior life begin? How might we truly know one another (or ourselves, really) when we are marooned in our own skulls? What does it mean to be together, here and now, doing this with you? What could the future hold for us? For Chemu Ng’ok, the future looks bright. 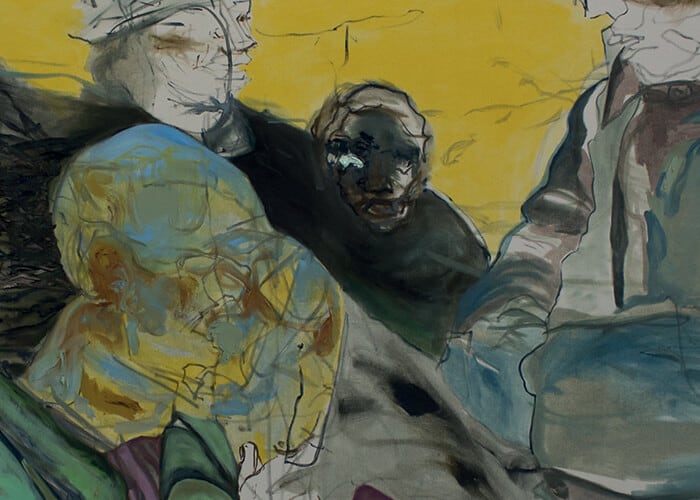 Anna Stielau is a Masters candidate at the University of Cape Town and a two-time gold medal winner in the Business and Art South Africa (BASA) Arts Journalism awards.