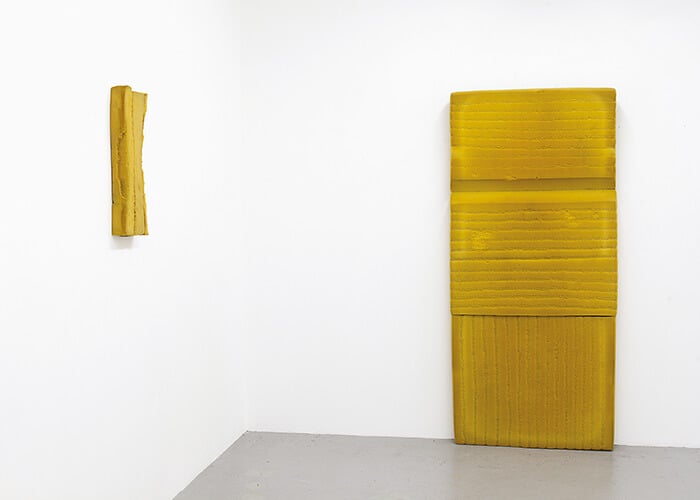 Bronwyn Katz’s oeuvre incorporates sculpture, installation, video and performance. In 2015, she was a Sasol New Signatures merit award winner, and recently participated in the 12th Dak’Art Biennale (Senegal, 2016). Katz is a founding member of iQhiya, an artist collective made up of eleven young, talented female artists who recently performed at Greatmore Studios, Cape Town.
Katz’ tantalising conceptual installation, ‘GROENPUNT’ (Blank projects, Cape Town) explores ideas of land, memory and human remains, specifically in a Cape Town suburb (namely Green Point) and place of the artist’s upbringing in Groenpunt, Kimberly, through mattresses, wire, rust and salt. The latter place is also where her known ancestors have been buried. The visual and tactile effect of the various sizes of yellow-green foam and metal is powerful, evoking bodily sensation and conceptual memory association.
Art offers philosophical depth precisely that an object within the context of a gallery assumes an object that ought to bear meaning, while simultaneously being an aesthetic object. In this light, the fragments of stitched foam mattresses suggest a land sewn with man’s plantings, the broken gallery of history in South Africa and the world in general. Within the context of this exhibition, the human remains hitherto referred to are approximately two centuries old, a solemn reminder of slavery’s legacy during colonial rule in South Africa. The dual reference in the exhibition’s title to her place of birth also functions as a reminder that this legacy is not isolated to Green Point (Cape Town) alone, but common to many personal histories throughout the country, which in a haunting way we tread on, only it is now covered, though not forgotten.
The weight of history – its continuous burial and (re)construction – is in danger of being lost to collective memory, which might cause a lack of knowledge of the past and therefore potentially the possibility of further violent incursions. This reading is supported by the single steel frame, a kind of skeletal stretcher of sorts. In this sense, there is the rather meaty, sombre and carnal as well as the alluring, soft, gentle surrender – beyond pain and suffering. I make the latter point insofar as the mattresses offer the sensation of gentleness that reminds one of sleep, a state of reverie and perhaps a spirited condition. Or perhaps not, perhaps abandon to the “other”, to sleep or drunkenness is replete with delusion and further confusion. Katz’s work is powerful in that it asserts a conscious strength, forcing one to see the foam, wire, and stitching as something one cannot easily negate in the present (the “ugly” truth of its materiality). At the same time, it is a reminder to not be lured by the apparent seduction. That urge for power and destruction, for assertion of one over another, needs itself to be conquered before our beds will be of the skies and our dreams not accursed. 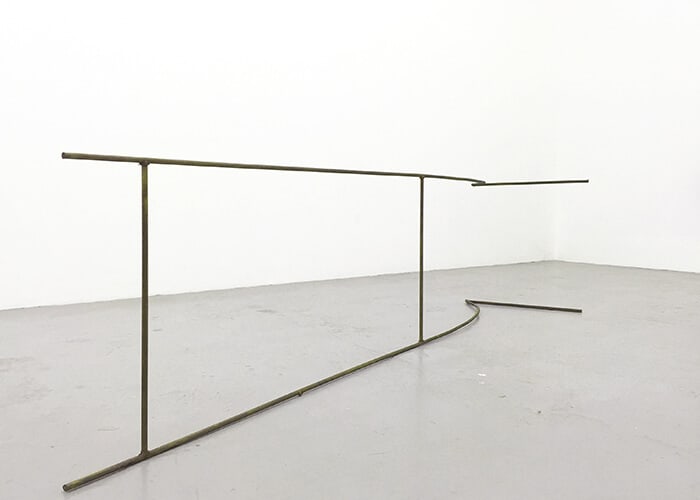 I find myself contemplating the universal spirit that pervades humanity, the torch that needs to be passed on through the generations in order to remember the past and forge into a brighter future amidst the painful struggle of possessing the batten. Only with the requisite trust in a consciousness above any particular individual or group – and yet potentially found therein – is it possible to reconstitute the body and find the other side of sleep. Yet will these remnants of the past, this crude reality wherein the very act of human burial was denied, indeed find that light we say exists beyond sleep, beyond even this life?
I recall that everything before me is sponge – weavings of various shapes and sizes, hanging, resting and lying contorted and awkward; that they each have a certain weight (or lack thereof), that their colours are a sick yellow-green with interspersed steel stitching. They function as images and patterns. They offer visual play and tactile delight. They barely make a sound if they fall and they can smell both beautiful or ugly. As aesthetic objects they bear no meaning; they are empty vessels. And yet it is the simultaneously co-existence of meaning and memory – the extra-aesthetic dimension – that invest empirical fact with history, religion, philosophy and other domains of human enterprise.
Yet they are beautiful images. Highly abstract, op artish. Even the steel sculpture entitled Kooi (bed) is a cold, solid series of lines, a geometrically precise pattern with no obvious use. Abstraction should be lauded. Not because it eschews political and social fact. Rather because in its non-reference to objects of the material world it both includes them all and implies historical, social and political realities. In addition, it has the potential to utter the impossible retort against realism, namely in metaphysical transcendence as line, colour, and form are no longer slaves to material laws. Indeed, reference to the world limits its scope somewhat. Or perhaps this is not the case, and it is the corresponding relevance to this world that is paramount. But as the foregoing suggested, the artist has nevertheless achieved that. One cannot bury the past. One can reconstitute history through art. Whether this is an effective tool of social transformation or not or merely itself an effect of a much larger process or processes, is debatable.
Based in Cape Town, Michaelis graduate Danny Shorkend continues to paint, theorise and write about art. He is currently completing a doctorate in Art History through UNISA.
Bronwyn Katz’ exhibition ‘GROENPUNT’ was on show at Blank Projects, Cape Town from 2nd June – 7th July 20