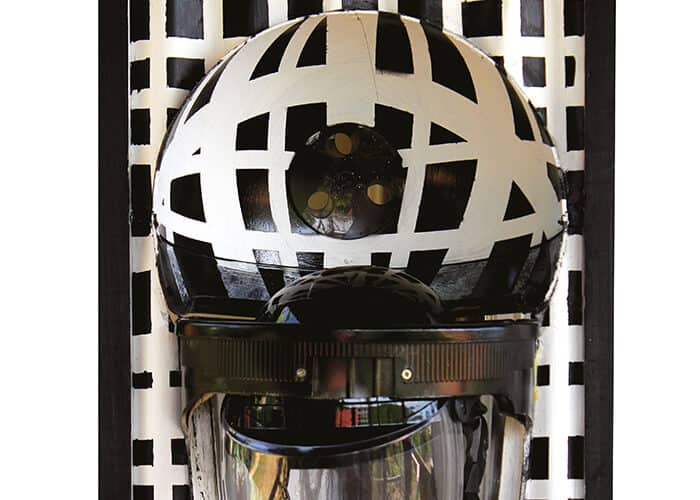 Before Eyob Kitaba set foot in Kampala (Uganda), he had worked on a series of works inspired by construction developments in his hometown Addis Ababa. He showed me pictures of the construction sites when I met him at 32˚ East | Uganda Art Trust in Kansanga. Eyob was at the end of his six week art residence.
“These colours; yellow and green – you will find everywhere in Ethiopia. They are the government’s colours of development” he said, scrolling through several pictures of locations fenced with coloured corrugated iron sheets. Little did he know our government was making developments of its own; the 2016 Presidential election campaigns were underway when he arrived in February.
These elections would later inspire his art installation Chess. The size of a dressing mirror and made from corrugated iron sheet, this black and white structure mimicked a chess board – a sporadic reaction to his individual experience of the city, Kampala’s hubbub amid political rallies. 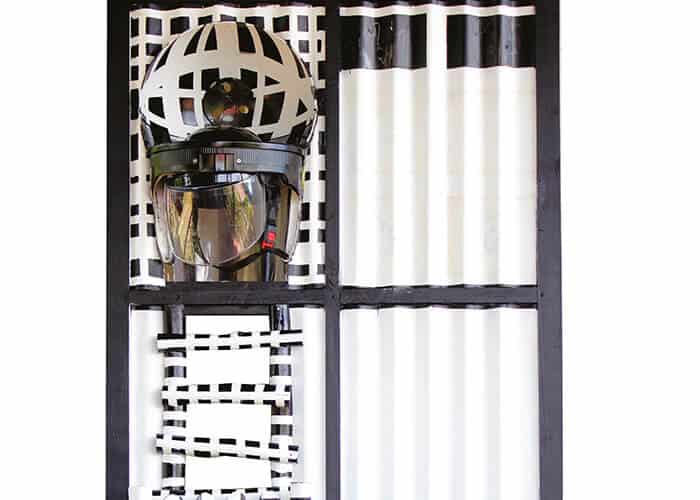 I am watching him keenly when he turns on speakers to play sounds captured off the streets of Kampala. A smile crosses his face as he reminisces about people carrying posters of different presidential candidates. “The supporters would have put a poster on me too if I stood there too long” he joked.
Eyob’s Chess is a reflection on the game of politics and the contestation of space. From interpreting urbanisation and development in Addis Ababa, he was caught up in Kampala’s political rallies. Chess is the bearing of “[his] experience within Kampala, and mingling among her very friendly and hospitable Ugandans.”
The installation is a tall wood embroidery with six chambers. At the base, a corrugated iron sheet supports a mirror and broken chair. Four faces – nearly fading behind the white paint – adorn the right upper most shelf of Chess. These are depictions of faces on posters reading ‘LONDA’ (Vote). There were so many across the city that it felt like a competition. After the elections however, these posters ceased to exist. Eyob faded them into a furnishing of orange paint covered with white. 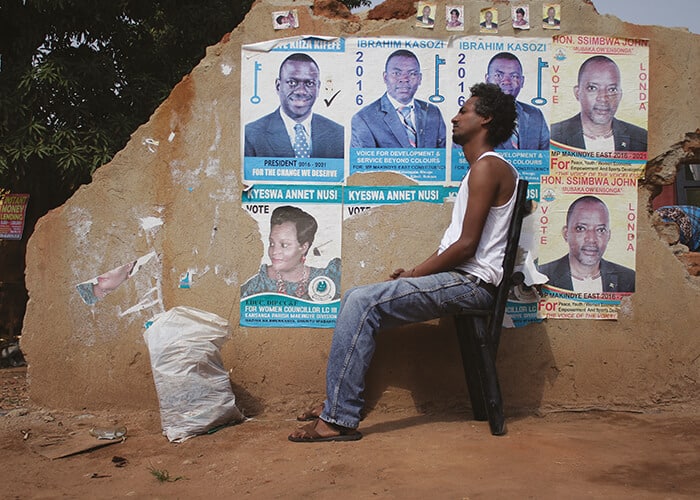 By immersing himself in dialogue with Kampala’s residents it enabled him to capture interpretations from how they feel before fusing his own interpretations. He explained this with the noise from the speakers playing. The ambiance was part of the exhibition. He moved around with a recorder to capture sounds of boda bodas (motorbikes) screeching past, voters rallying behind their candidates, and shouting voices. Like the fading faces, this noise had also dwindled away.
“The sounds are noises I recorded during the political rallies, so it created an image for me,” he explained. “It takes me back in time to the moments when all the noise was happening. I can visualise the face of that man talking” he said, gesturing to the voice of a man chanting away in a conversation that I couldn’t make out through the speaker. As I tried to meditate on these words he added “The noise is able to occupy the space in your mind.”
Pouring himself into the boda bodas chaos, he became acquainted with the feelings and emotions of the local people. They spoke to him freely, allowing him to grasp a sense of what life here is like. This inspired the boda boda helmet in the upper left chamber. Bodas are a vessel for rallies and chaos. Ugandans use them daily as a means of transport, even though they are a dreaded cause of accidents. 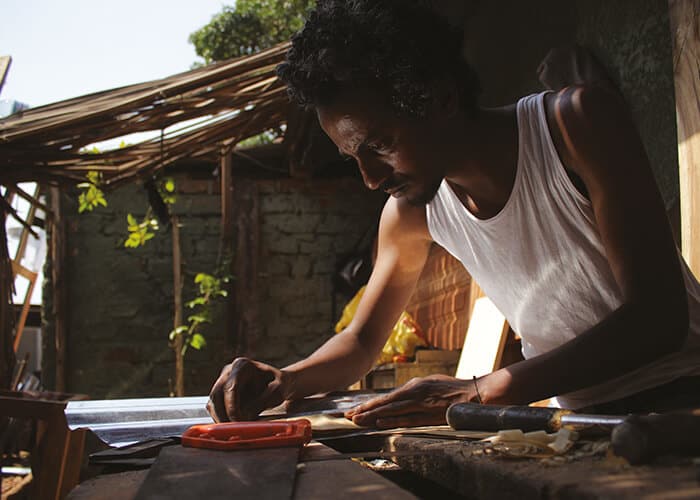 Stationed beneath the top fragment of a hair drier whose bottom is improvised with a plastic bucket, the helmet sits in there like a woman’s head; highlighting “the balance between masculinity and femininity” he clarified. He had walked into a salon and found eight people plaiting one woman’s hair. She was on her phone and a man was doing her nails. “I was amazed! That doesn’t happen in Ethiopia. It’s really crazy – like an unusual performance” he said, elated.
The broken chair, beautifully cast with chess patterns, was once a dirty useless part of the fence at 32˚ East. He recycled it; interpreting that as human life. “At what point in people’s lives do they turn out valuable?” he retorted.
Then a ladder. Poised on top of the chair, the ladder exemplifies an avenue most of us use to get ahead in life. Like the politicians who stand out of the lot claiming to make things better, or the average city dweller working downtown and hoping to make a better income someday. Eyob recreated Kampala’s discussions about life and politics in a way many of its inhabitants would not have visualised.
Douglas Dubois Sebamala is an arts writer, art critique and performing artist based in Uganda. He has over six years rooted in performance theatre, film, poetry, dance and arts journalism.