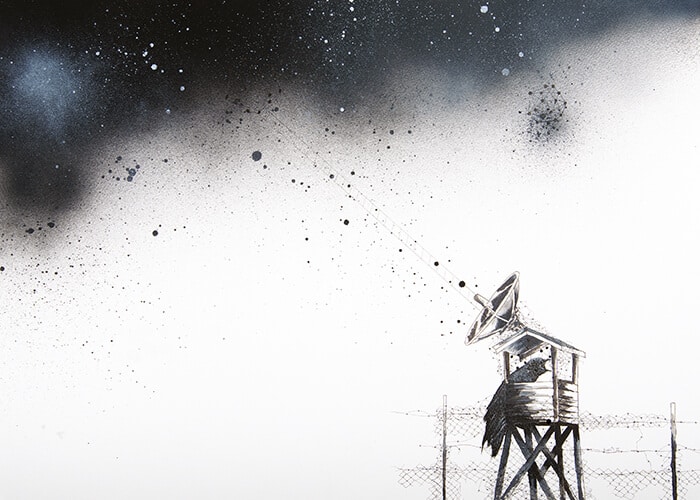 Jackie Karuti, from the series ‘There are Worlds Out There They Never Told You About,’ 2016. Mixed media on paper, 57 x 76 cm. Image courtesy of the artist and Circle Art Gallery.

In The Case of Books is Jackie Karuti’s longest running performance. It was first performed in Nairobi in 2013, again in 2014, and was performed in Kampala in 2015. In this work, Karuti identifies various spaces around the city that house books, encouraging local residents to join her in dusting and discussing them. In The Case of Books is a “lifelong” project that Karuti intends to perform in as many different cities with as many different participants as possible.
At a time when the arts are in a critical condition in Kenya and Uganda because of the cuts in government spending on arts, culture, and arts education – the ritual of dusting a book and restoring it to life is a significant one. If dust is collecting on books, however, it is because they are not being read. This realisation (alongside the performance of In The Case of Books) inspired Karuti’s 2014 exhibition ‘Where Books Go To Die.’ The exhibition simulates a library, complete with a mechanical mannequin cast as an authoritarian librarian, pounding her fist and demanding silence. If libraries are where books go to die, where do books live? Another installation was a table of books, fanned so that the pages fluttered as though being turned. The living books were those with turning pages, those being read. 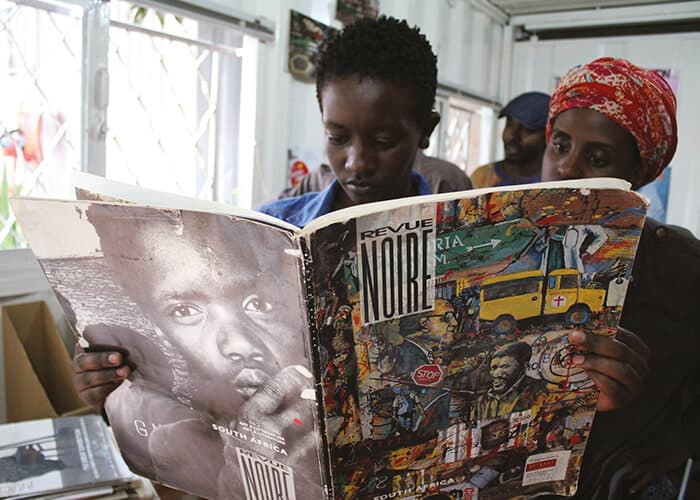 Jackie Karuti, In The Case of Books, ongoing project. Image courtesy of the artist.
“This is where the future is,” said Karuti, referring to the books. Her work raises very important questions about books and systems of knowledge. Where is knowledge kept? Who has access to it? Who does not, and why? What can access to knowledge do for us? Through her engagement, Karuti points out that books are not only valuable for what can be learned from them, but for what they can help us unlearn, deconstruct, and reorder. The same applies to Karuti’s other projects, which consistently pose uncomfortable, self-reflexive questions.
Among the more controversial of her explorations is her performance, I Can’t Wait To See You. Conducted in Johannesburg, Amsterdam, and Kampala, the performance will soon travel to Berlin and Nairobi. In this performance Karuti mimics a wedding ceremony with another person, female or male, whilst wearing a motorcycle helmet. The performance explores how gender, sexuality and safety relate to urban spaces. Each city reacts differently. Johannesburg evokes the feeling of physical danger, while Amsterdam cringes at the coming together of a white and black woman. 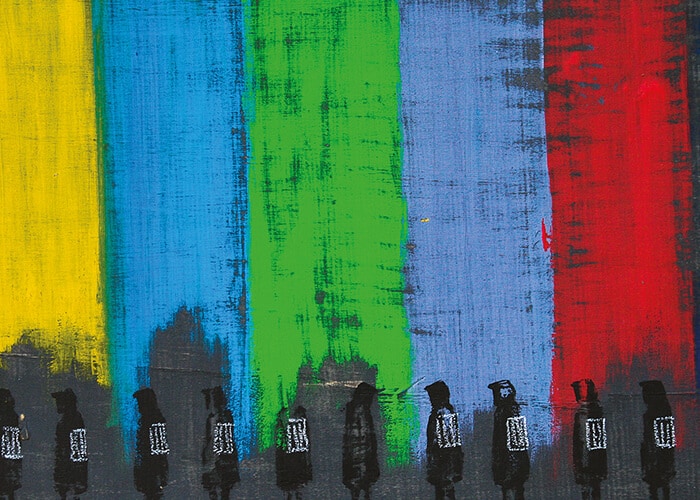 Perhaps no works have elicited more questions and doubts about her sanity and well being than her exhibitions dealing with suicide, beginning with ‘A Great Perhaps’ (2014), which came out of Karuti’s residency at The Bag Factory in Johannesburg. Her paintings in this series are simple, aesthetically pleasing, and beautifully morbid. Her use of negative space steeps viewers in the loneliness of the figures with ropes around their necks. ‘A Great Perhaps’ not only brings to light a discussion most people would rather avoid, it offers an alternative perspective. Is the act of suicide a form of escape or a form of relief? Is it a lack of options or is it an unrecognised option? ‘A Great Perhaps’ led Karuti to ‘Labrynth’ (2015), an exhibition that asks what pushes someone to the point of suicide.
With every project, Karuti seems to dig deeper in an effort to uproot convention, following the trajectory of her self-made curriculum. Her approach and the resulting projects reflect her reading list. ‘A Great Perhaps’ is titled from a quote in the book Looking for Alaska by John Green: “Francois Rabelais. He was a poet. And his last words were “I go to seek a Great Perhaps.” That’s why I’m going. So I don’t have to wait until I die to start seeking a Great Perhaps.” ‘Labyrinth’ is a mythical and philosophical reference. In a painting also titled Labyrinth there are endless figures marked with bars as a sign of their imprisonment. One figure however is unmarked and faces in a different direction. 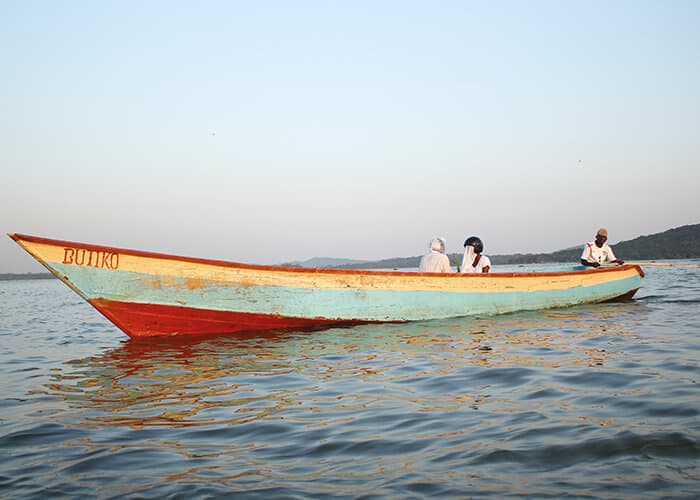 Jackie Karuti, from the Kampala performance of I Can’t Wait To See You, 2015.

This figure is the most representative of Karuti, who continues to diverge from popular thinking and common narratives. In her most recent work, she seems to step away from reality, falling deeper into mythology and imagination. The strength of her work is in its ability to relate fantasy and mythology to reality. Her most recent exhibition, ‘There Are Worlds Out There They Never Told You About’ (2016), currently on show at the Goethe Institut Nairobi, is part of a larger conversation about migration. It includes drawings, videos, animated shorts, and installations about migration and alternate worlds in space and in the ocean. They relate to black mythology, like the myth of an underwater city, founded by the children of black women who were thrown overboard from slave ships into the Atlantic Ocean. The alternate worlds created through art or reading may be as distant as other worlds in space or as close to home as choosing an alternative life instead of one that society deems appropriate. It’s all about conscious decision born from knowledge. In her definition, “Alternatives mean you can choose different options regarding life, death and general existence. I’m most keen on the possibility of alternate worlds, which defy normalcy, dogma and conventional living.”
Karuti dropped out of her formal education at Mank and Tank College of Art and Design to self-educate, developing her own curriculum. To her, “Self-education encourages independent thought and learning as well as critical thinking skills. It eventually becomes a lifelong pursuit of constructive and stimulating thought processes.” Her obsession with the physicality of books and her pursuit of knowledge resulted in ‘Exit’ (2015), a series of homemade zines which invited the uncomfortable intimacy of looking into the artist’s sketchbook and her unfettered thoughts. Two special editions focused on queerness and migration, probing into some of the most pressing international issues, but doing so at a private and intimate level. 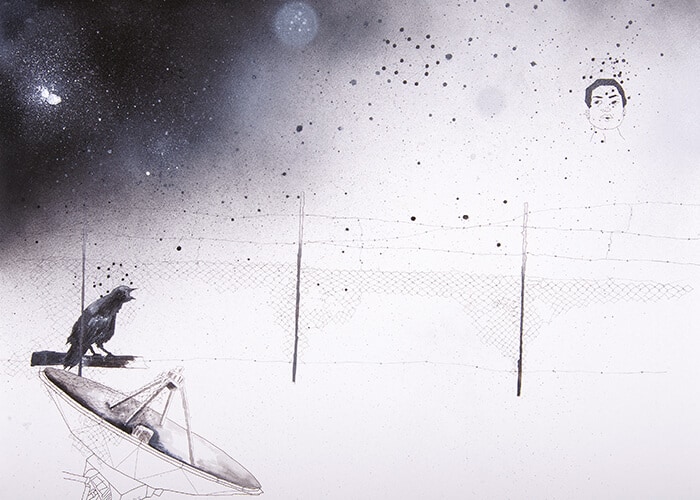 Jackie Karuti, There Are Worlds Out There They Never Told You About, 2016. Mixed media on paper. 57 x 76cm. Image credit: Eric Gitonga.
In Karuti’s work, self-education proffers the possibilities of freedom to those who are far from the centre of knowledge; the freedom to discover alternate universes and construct your own future. As Karuti puts it, “The function of alternate universes is simply imagining that something else other than the present reality exists. Whether it’s better or ideal is not up to us, but, who’s to say we don’t live in one of the alternate tomorrows that somebody else once imagined?”
Gloria Kiconco is a poet and essayist based in Kampala, Uganda.
Jackie Karuti’s work will be on show on at 1:54, as part of Circle Art Gallery’s stand, as well as at the FNB JoburgArtFair.

Black is Blue: A durational performance artwork by Oupa Sibeko