Sharjah Art Foundation (SAF) will feature nearly 90 established and emerging artists from around the globe, over 60 new commissions, as well as many never seen before works in the next Sharjah Biennale. Open to the public from 7 March to 10 June 2019, the 14th edition of SB14, ‘Leaving the Echo Chamber’, will explore the possibilities and purpose of producing art when news is fed by a monopoly of sources, history is increasingly fictionalised, when ideas of ‘society’ are invariably displaced, and when borders and beliefs are dictated by cultural, social and political systems. 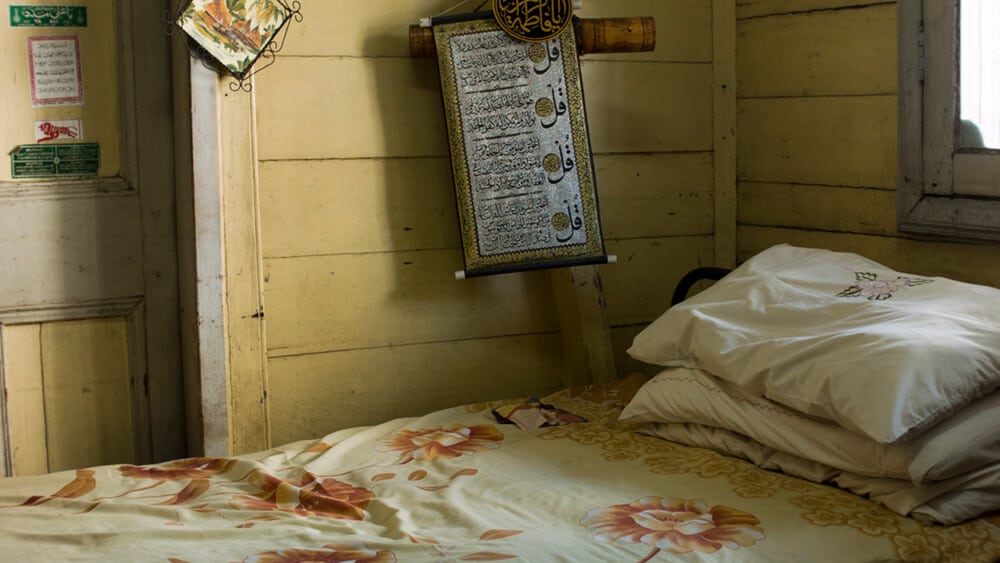 Curators Zoe Butt, Omar Kholeif and Claire Tancons, who have collaboratively conceived the SB14 theme, will present three distinct exhibitions bringing together a range of experiences and works – including major commissions, large-scale public installations, performances and film – to create a series of provocations about how one might re-negotiate the shape, form, and function of the ‘echo chamber’ of contemporary life, towards a multiplying of the echoes within. Such vibration is representative of the vast forms of human production – its rituals, beliefs and customs. Butt, Kholeif, and Tancons will also spearhead three distinct programmatic approaches for SAF’s March Meeting, an annual convening of local and international artists, curators, scholars and other arts practitioners who explore topical issues in contemporary art through a programme of talks and performances. March Meeting 2019 will coincide with the opening of SB14. Full programme details and participants will be announced in 2019.

“Contemporary life is dominated by competing for information and fluctuating histories – a reality that raises important questions about the trajectory of contemporary art, as well as the conditions in which it is made,” said Hoor Al Qasimi, President and Director of Sharjah Art Foundation.

“Zoe Butt, Omar Kholeif, and Claire Tancons bring incredibly different perspectives to these questions, and together represent the complexity of challenges faced by today’s artists and society as a whole. The aim of the Biennial is to deepen the context of these questions through thought-provoking and often experiential works of art, and the March Meeting will complement and provide opportunities to explore these works and the Biennial theme more deeply.”

On view in buildings and courtyards across the city’s arts and heritage areas,  as well  as in SAF’s studios in Al Hamriyah, in the East Coast city of Kalba and other spaces in Sharjah, ‘Leaving the Echo Chamber’ will explore subjects ranging from migration and diaspora, to concepts of time and interpreted histories – giving artists the agency to explore stories that echo in a different way, revealing differing means of connecting, surviving and sustaining a collective humanity.

The complete selection of participating artists follows below. Artist biographies and full curatorial statements are available at sharjahart.org/biennial-14 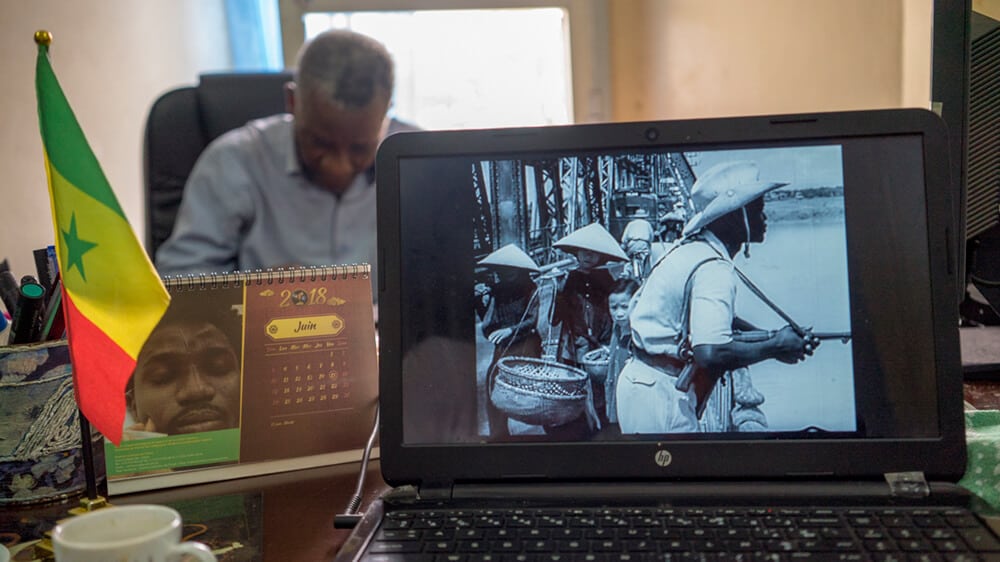 ‘Journey Beyond the Arrow’, curated by Zoe Butt

‘Journey Beyond the Arrow’ aspires to provide deeper context to the movement of humanity and the tools that have enabled or hindered its survival. From spiritual ritual to cultural custom, a technological process to political rule of law, all such practices possess particular objects and actions that aid or abet mobility. In this exhibition, artists reveal the generational impact of a range of physical and psychological ‘tools’, and how the representations and meanings of these tools have shifted as a consequence of colonial exploit, social and religious conflict or ideological extremism. ‘Journey Beyond the Arrow’ seeks to illuminate the necessity of exchange and diversity across the globe and throughout human history. 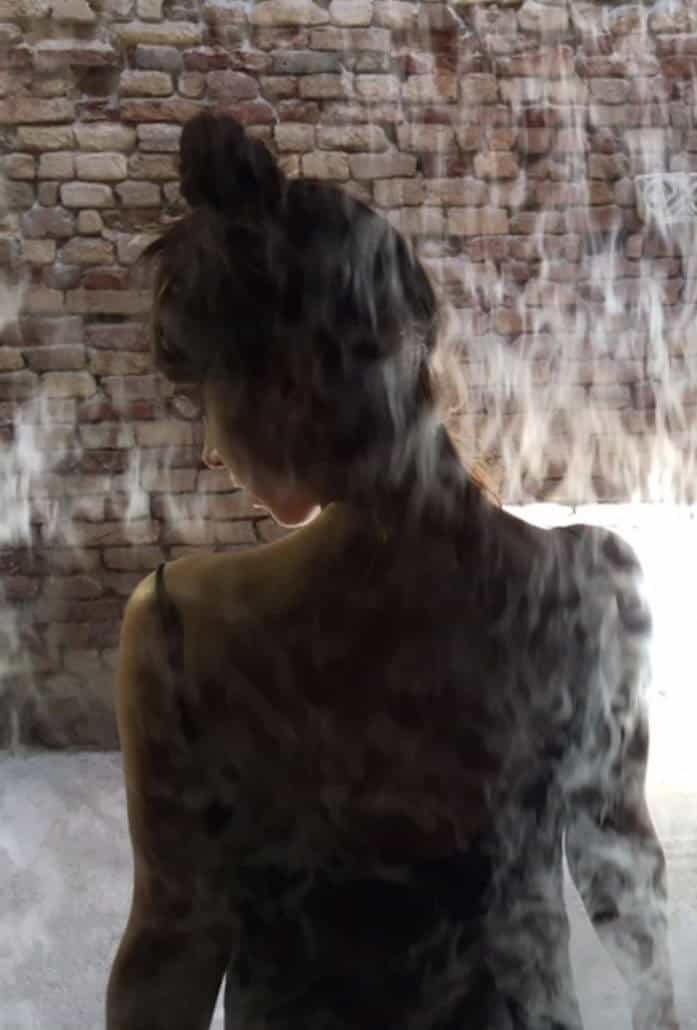 Responding to the overall theme of ‘Leaving the Echo Chamber’, ‘Making New Time’ is a provocation on how material culture can be reimagined through the lens of a group of artists whose political agency, whose activism, and whose astute observations encourage us to extend beyond the limits of belief. The exhibition considers how economies have formed around technological culture, how narratives are created and deconstructed, and how these forces enable a reconstitution, or indeed a restitution of a history lost, or even unknown. Drifting in and out of hegemonies and entrenched structures of power; here, the sensorial and the bodily intertwine, becoming archaeological sediments in the landscape of Sharjah, imploring the viewer to consider their complicity in a world that is forever fleeting from our hands. 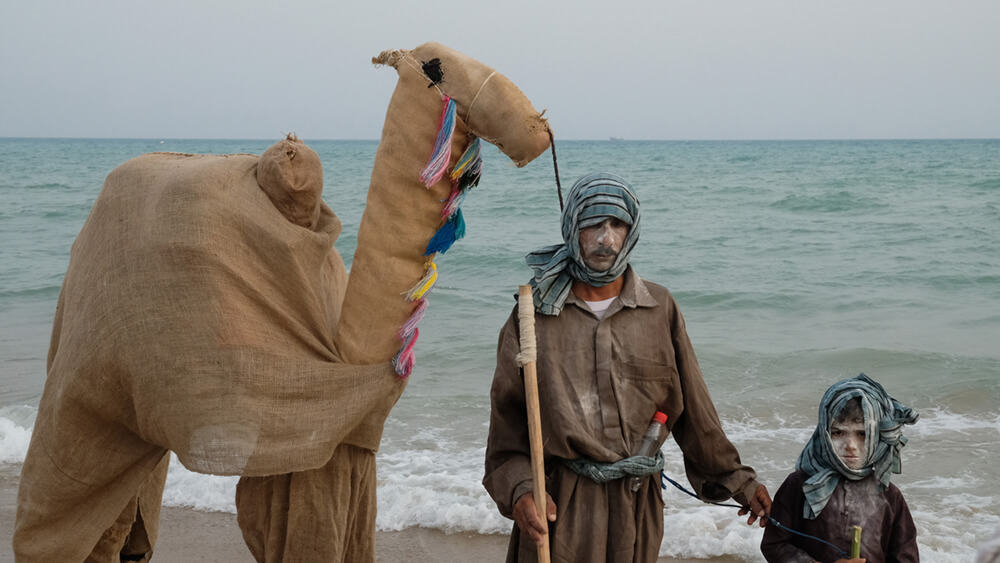 Alia Farid, At the Time of the Ebb. Production Still. New commission for Sharjah Biennial 14: ‘Leaving the Echo Chamber – Look for Me All Around You’, 2019. Courtesy of the artist.

‘Look for Me All Around You’, curated by Claire Tancons