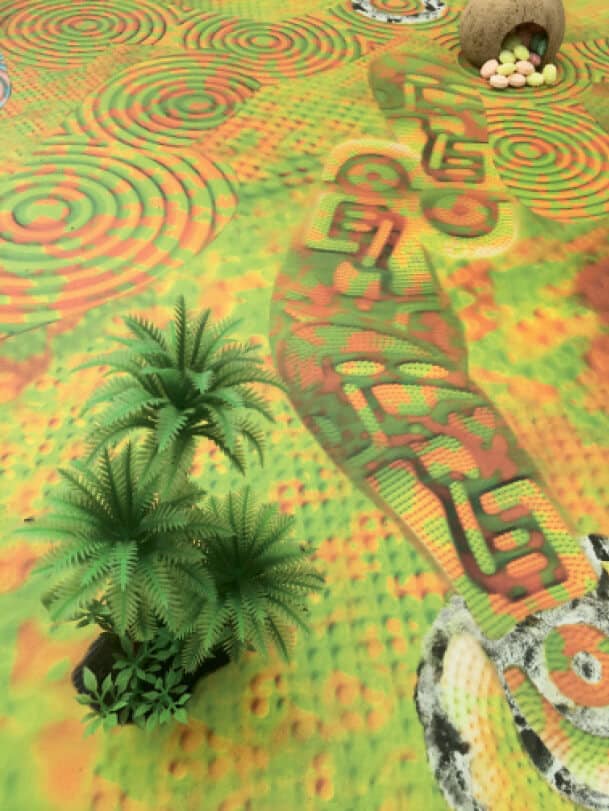 Spanning four months – 10 March to 12 June – the 13th Sharjah Biennial is perhaps the most ambitious to date. While centred in Dubai it also operates out of four ‘off-site projects’ based in Dakar, Istanbul, Ramallah and Beirut. The vision is inclusive yet open – deliberately designed to bring a wider public into the all too rarefied and exclusionary art world.

Focused on water, earth, the culinary and crops, the event induces the most visceral of human connections: the power of water to buoy and sustain us, the power of the earth to nourish and house us, the technology, poetry, and culture that defines the tools we use to feed ourselves, and the nutritional cycle in a time when the Western-centric seasons – spring, summer, autumn and winter – make less and less sense.

What distinguishes all of these rhythms is the wave – the eternal, unbreakable and unending ebb and flow of the tides. “A wave is a variation in shape that, in itself, is neither progressive nor regressive. It is the vehicle for the process of erosion, flooding and chemical weathering. It is an exercise in heterogeneity, a cyclical tracing and re-tracing of form, energy and matter.”

These words by Christine Tohme, Sharjah 13’s curator and the director of Ashkal Alwan in Beirut, reveals a contaminated core vision, for the project is as focussed on the eternal recurrence of rhythm and system, be it ecological, psychological, historical or cosmological, as it is focussed on the disorder endemic to all of these rhythms.

An Arabic noun, tamawuj signifies “a rising and falling of waves … a flowing, swelling, surging or fluctuation … a wavy, undulating appearance, outline or form.” 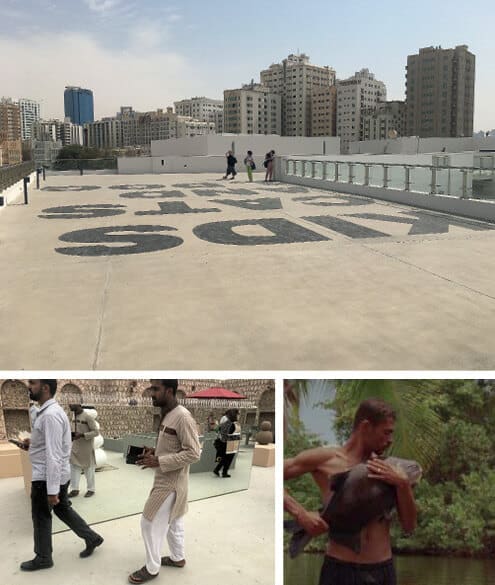 What is most intriguing in the choice of term and focus is its ability to capture “a loosely synchronous metabolism,” because for Tohme tamawuj operates “not only as a cyclical repetition of the same gesture, but as a reciprocal act of exchange, where various nodes of the biennial both draw from and flow into one another.” Hence Tohme’s conclusion that tamawuj is “not meant as a demarcation but as the undulation of the many lines we tread, simultaneously and together, while things fluctuate around us.”

Which is why a performance work, Climavore, investigates the “food choices during seasons of polluted oceans, flash floods along weakened coasts, periods of severe drought or overpopulation of invasive species.” Or why Vikram Divecha examines the migrations of gardeners and seeds from family farms in the Punjab, Pakistan, to the UAE. Or why Natascha Sadr Haghighian and Ashkan Sepahvand address “incongruous translations” or “productive discrepancies between sensing and knowing … in soundscapes recorded at various sites of energy extraction.” It is the silenced language of this extraction – “their sonic properties and non-visible topographies” – which returns of us the unspoken, hidden or forgotten.

Or, Abdelkader Benchamma’s journey through “mental and physical space” and his realisation that “materiality and temporality are continuously in flux.” Or Ursula Biemann and Paulo Tavares’ recognition that for the Sarayaku, an Amazon people, the decimated forest is “not simply a passive backdrop upon which political and economic disputes play out but rather a legal subject bearing rights of its own” – a “Forest Law,” a  law of trees, no different, say, than a law of water, earth, sky, heavens.

Or, Paola Yacoub’s investigation of the sacred and the ordinary. Focussing on the buildings in Mamluk and Ottoman Cairo, her work centres on “the Sabil-Kuttab” – structures comprising a fountain, or sabil, which provides free drinking water to passers-by, and an elementary Qur’anic school, or kuttab. For Yaoub these are “the gift of water and the gift of writing,” integral to life and social bonds.

Or, shifting from the integrality of traditional eco-systems, A.S.T. – Alliance of the Southern Triangle – projects us into a future-world in a search to discover “thought adequate to the geospatial, political, urban, ecological and cultural realities of the twenty-first century.” What is the “infrastructure” that “sets the invisible rules that govern the space of everyday life?”

Stéphanie Saadé’s film, Portrait of a Lake, captures this precarious cycle. “Created by seismic activity that starts in Jordan and crosses the entirety of Lebanon and Occupied Palestine and Syria before ending in Turkey,” this work captures the rhythms of thelake, its fullness and drain, as it is “filled by the season’s snowmelt,” as its water level declines “by summer’s end,” leaving only “a fertile depression.” We see a map suspended from the ceiling, we watch water being poured as “the lake returns to life,” before the drip-drip-drip as the water leaks to the floor to regather and redraw “the outlines of the lake anew.”

If a regenerative vision, it is also one that is fragile. And it is this double-bind which has informed Christine Tohme’s deftly troubling curatorial project. Yet another soundscape, this time by James Webb, “distils the vitality and fragility of life through the isolation and amplification of a pulse.” This amplification becomes all the more perverse in Christdoulos Panayiottou’s “pseudomorphs” or “false forms.” A perversion which Jon Rafman echoes in his examination of the abomination of the natural world and his reminder of the chilling hubris which attaches itself to biologically modified organisms and unnatural food chains. 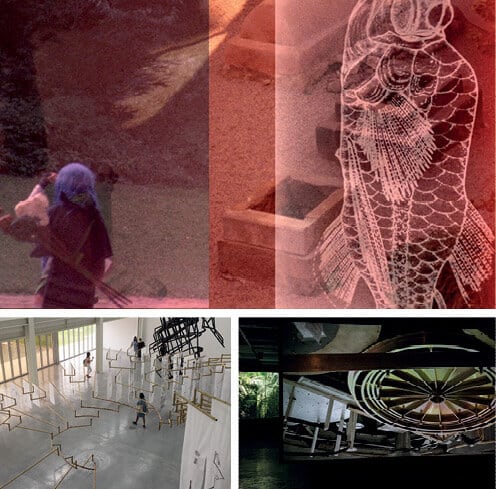 Basim Magdy further examines this overlay and distortion by asking us to think of the ocean and its hidden floor – a floor which, it has now been discovered, bears the markings of an ancient human hand – a world that “occupies the margins of consciousness and has been left out of history books.”

Then there is Jonathas de Andrade’s vision of a fisherman lovingly embracing his catch “until its last breath;” an “expression of tenderness following violent capture.” Or then again, Ismail Bahrï who in a video work repeatedly rubs a sheet of paper froma magazine, leaving “the imprint on the artist’s hands … the residual transfer and accumulation of energy and information” – a transfer which is unceasing, inescapable, toxic, the very definition of history.

An impressive array of “questions and answers” – geological, social, economic, cultural, and cosmic – ‘Tamawuj’ is a compelling rethink of art and its place in the world. If contamination is inevitable, so is the possibility to reimagine the world. The ancient and modern are one. If waves repeat themselves, they nevertheless also alter. Repetition, like ritual, brings forth difference.

The Raqs Media Collective, which stems from Delhi, achieve through a cycle of readings – in English, Arabic, and Urdu – this wave, this cycle, this churn. The story they tell is one of the most defining in “the intellectual history of the world.” Titled The Necessity of Infinity, the reading recounts the exchange, via letter in 999 CE, between the 28 year old Al Beruni – located on the shores of the Aral Sea in Gurganj, present day Turkmenistan, and the 18 year old Ibn Sina, based 250 miles away in Bukhara, now Uzbekistan.

Polymaths both, they review their divergent interpretations of Aristotle’s grasp of heaven and the stars. Are we alone in the universe, they ask. The 18 year old Ibn Sina concluded that we were not alone. 600 years later Giordano Bruno would be burnt at the stake for reaching this conclusion. Gifts of insight, like gifts of water and writing, are sometimes denied to us. But then again, sometimes we are given the bounteous complexity of existence and rediscover its infinite measure through art. Sharjah 13 was a master class in rethinking the elemental. I see an iceberg being towed from the Antarctic to the Gulf….