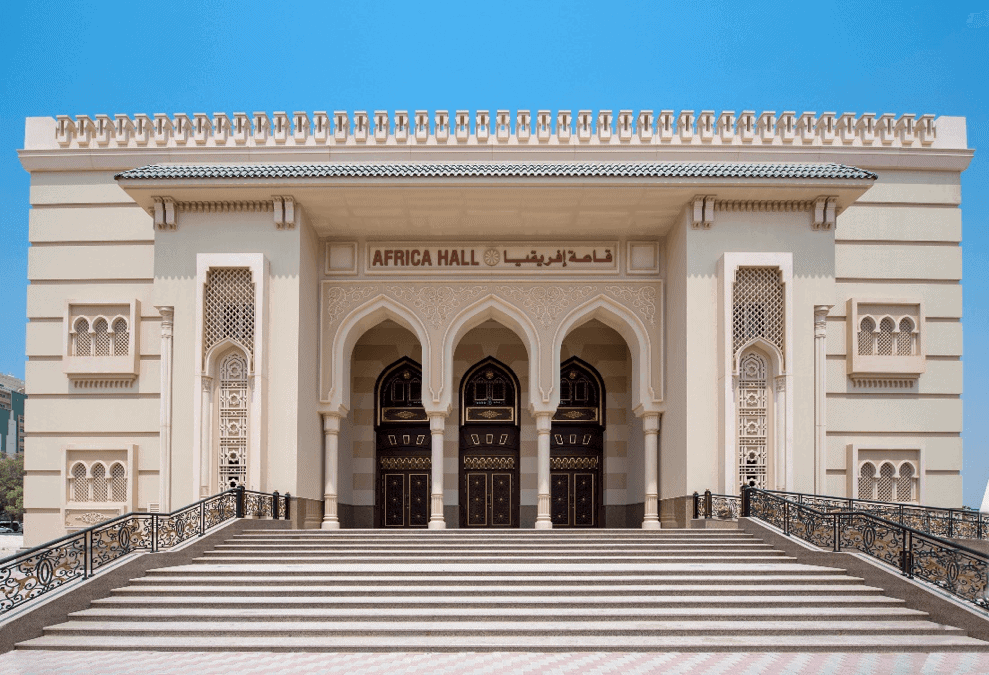 Initially opened in Sharjah in 1976, Africa Hall’s first cultural and political event was the Arab-African Symposium, held 14-18 December 1976. The new Africa Hall, which has been rebuilt on the same site as the original building, will serve as the meeting place for conferences, symposia, lectures, film screenings, stage plays and performances related to the activities of The Africa Institute. An additional building which will later permanently house The Africa Institute will be constructed adjacent to Africa Hall, designed by Sir David Adjaye.

The Africa Institute will serve as a globally-oriented, interdisciplinary academic research institute dedicated to the study, research, and documentation of Africa; its people and its cultures; its complex past, present, and future; and its manifold connections with the world. This centre for African and African Diaspora studies will also examine the historical and contemporary linkages between Africa and the Arab Gulf region, demonstrating that geographic proximity and economic and cultural exchanges over millennia have long connected Africa and the Arab Gulf. Conceived as a research-based think-tank and a postgraduate studies institution, The Africa Institute will offer both Masters and Ph.D. programmes.

‘Sharjah has always been at the crossroads of various cultures, with great influence from Africa due to geographic proximity and economic exchange. The establishment of The Africa Institute, the first research and archival institution of its kind in the region, pays tribute to this rich history,’ said Al Qasimi. ‘We are also pleased to re-launch Africa Hall which, since its founding in Sharjah in 1976, created a lasting legacy of cross-cultural connection and artistic expression.’

‘The newly rebuilt Africa Hall is hoped to revive the golden era of the building in the 1970s and 1980s when it served as the hub of cultural events that included literary events, theatrical and musical performances, and poetry reading, in addition to conferences and symposia on ranges of topics,’ said Dr. Salah Hassan, Goldwin Smith Professor and Director, Institute for Comparative Modernities, Cornell University and academic advisor to The Africa Institute.