Shoreline represents two solo exhibitions of new photographic and video work by Stephen Inggs, professor of photgraphy at the Michaelis School of Art, University of Cape Town (UCT) and Vanessa Cowling, photographer and lecturer from the same institution.

Central to Shoreline is a video work by Vanessa Cowling entitled Salt. The work presents a portrait of a volatile and emotive ocean, constantly churning and lapsing. It is endless. It continues. It is real time. It is now. Turn 180 degrees and the viewer is placed opposite a grey-blue ocean diptych by Stephen Inggs in static contrast to the volatile ocean. The secondary wall depicts from above a map-like view of the ocean coastline cartographically pinned, a palimpsest of sienna brown images against an x-ray vision of Simonstown -the peninsula and largest naval base in South Africa. 25 string lines tacked down with silver thumbtacks pinned over the photographs. There is a militaristic and one could debate masculine viewership onto land inherent in this piece. A foucault panopticon lens of seeing and not seeing. The horizontal string lines suggest an intersection and dis-juncture with land. It is inviting of perhaps a further additional layer to be added and is evocative of the formal approaches to analogue photography in which a piece of film is exposed for a split second to light requiring continual development and coagulesense. 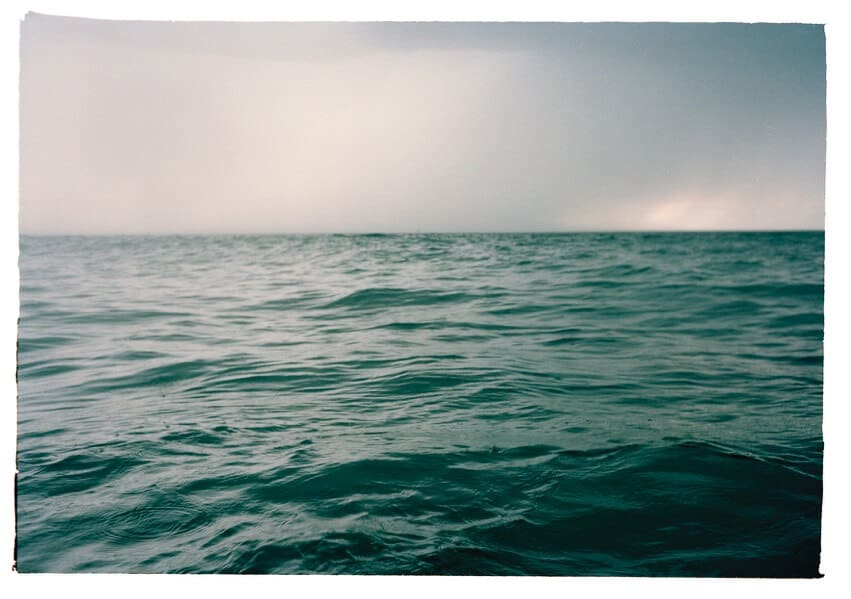 Stephen Inggs, Saltwater I, 2018. Image courtesy of the artist and Barnard. 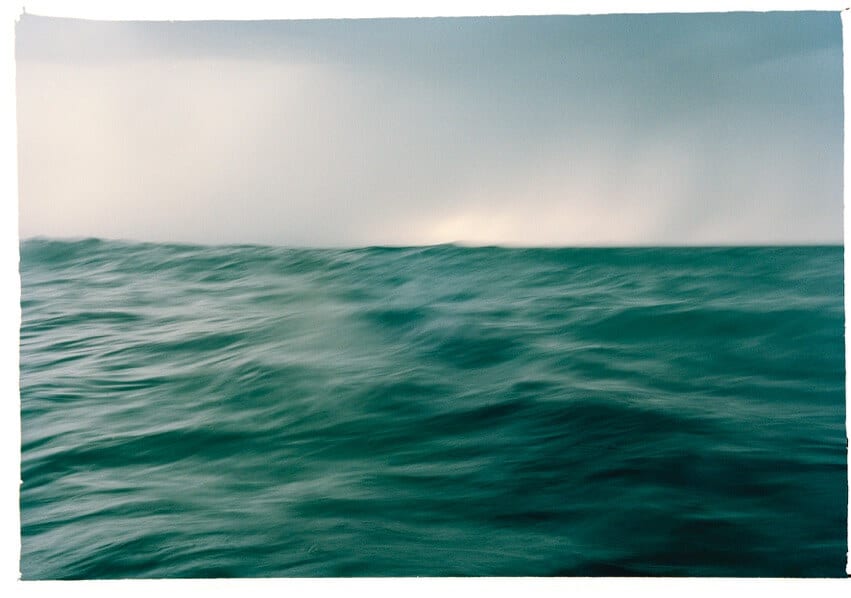 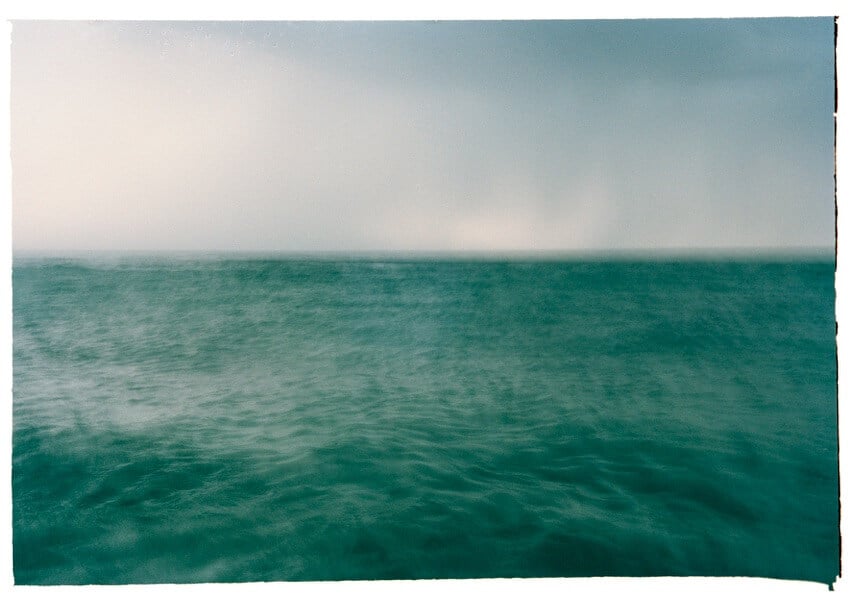 Accompanying this work by Stephen Inggs are nine glass jars of sand placed on a shelf beside it. There is an integration and mixture of material in each of these jars – suggestive of crumbling matter like the legs of Ozymandias left to ruin. The particles beside the ocean that each day return anew, following the ocean’s tidal progression. It speaks to interjection and dis-integration and the tension co-existing between. Carefully etched onto metal for the lid of each glass jar is the locational name where each sand amount was sourced from. This includes Big Bay, Milnerton, Long, Noordhoek, Glen, Llandudno, Muizenberg, Queens, Danger’s, Thermopylae, Misty Cliffs and Scarborough. These are all shorelines located along the southern coastline of the Western Cape. One wonders how many of these particles now include plastic particles, an after-effect, symbolic of 20th and 21st century rapid consumerism. 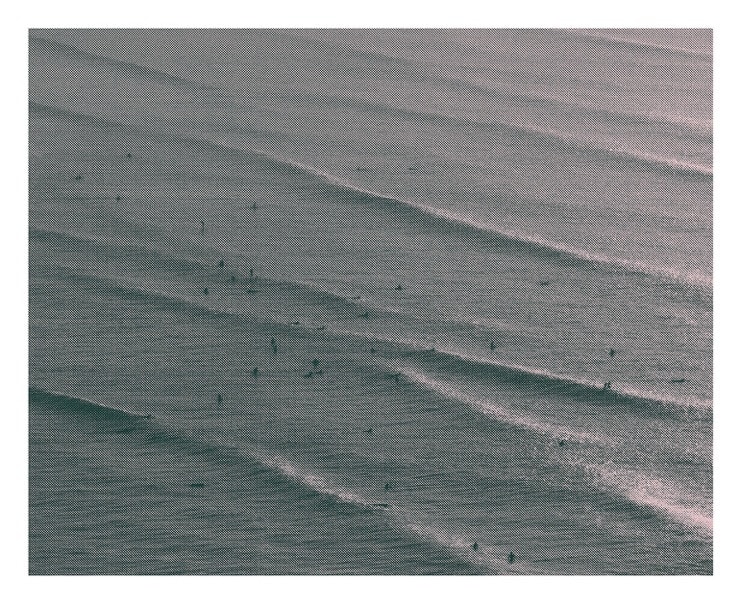 Stephen Inggs, Backline, 2018. Image courtesy of the artist and Barnard.

By contrast Vanessa Cowling’s colour ocean-scapes, printed in square format are evocative of Instagram and are a commentary on social media culture and the proliferation of online imaging and availability. Since the launch of Instagram over 20 billion images have been uploaded onto this platform with a current average of 50 million images per day. Cowling’s series of square format shore scenes evoke the notion of idyllicsm and joie-de-vivre associated with these sand scapes. There are yachts, umbrellas and brightly coloured towels spectacled beside an almost unnatural turqouise ocean. Is this a yearning for a paradise lost and found? An escape from the reality and dis-junctures of our rationalized time.

Inggs’ Tideline I – III depicts 54 small format images detailing and chronicling debris and dirt that includes plastic bags, juice cartons, straws, nik-nak packets, bottle tops, polystyrene cups and ‘dagga’ packets interspersed with sea stones. This disparate classification of wast-ed objects evokes the heartbreaking investigations by artist filmmaker Chris Jordan[1] who in 2010 visited Midway Island in the Pacific Ocean to find the corpses of birds with an assortment of plastic items absorbed into their guts – a symbolic and depressing moment. 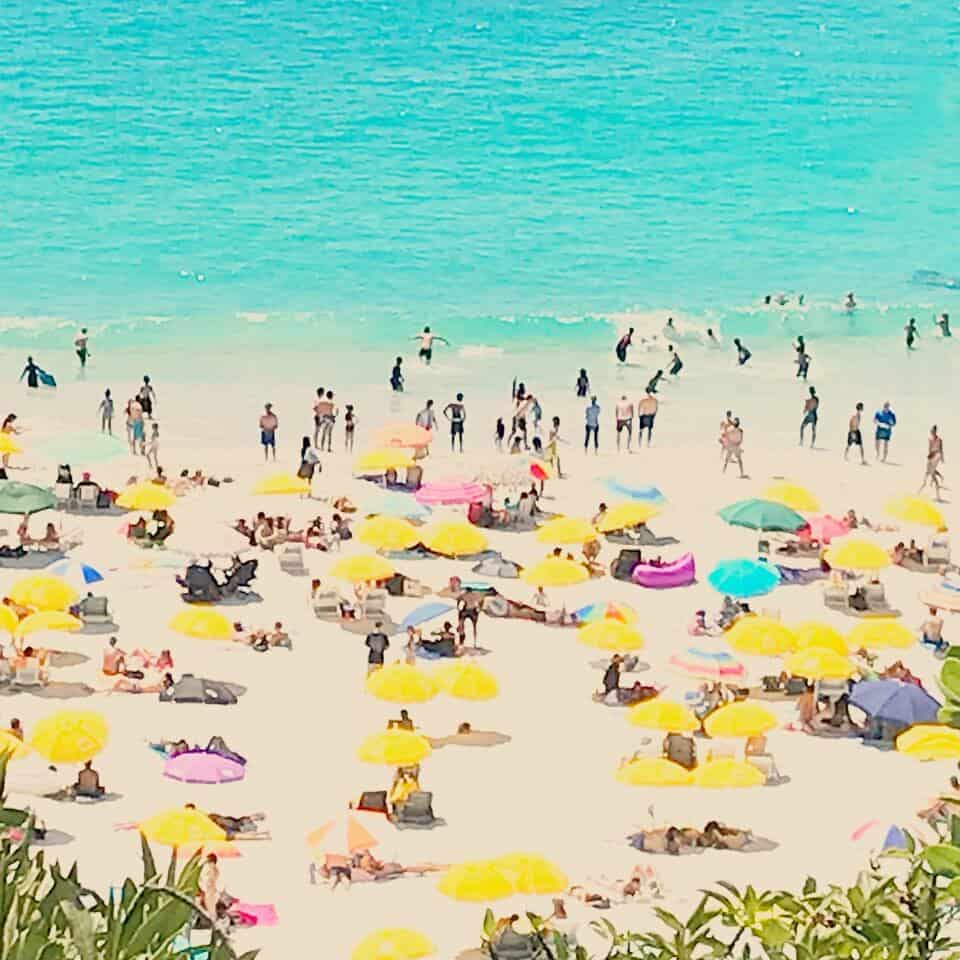 Saltwater I, Saltwater II and Saltwater III – a triptych series also by Stephen Inggs – entice the viewer into the ability of treading water in throes of a gathering and expectant storm. There is a sensory expectance of an oncoming and approaching storm. It is an exacting encounter permutating between the static and sublime.

A final lingering image from Shoreline is Inggs’ Backline, a seemingly universal image rendering the notion of repetition and cyclical waves reminiscent of early morning or twilight surfers.