The Iziko South African National Gallery hosted a panel discussion, entitled ‘Should Contemporary Art Last?’, as part of Conservation Week. This was the first in a series of talks, aimed at creating an awareness of the importance of preserving and conserving artworks for present and future generations, that allows the public to actively engage with professionals, practitioners and curators from the art industry. 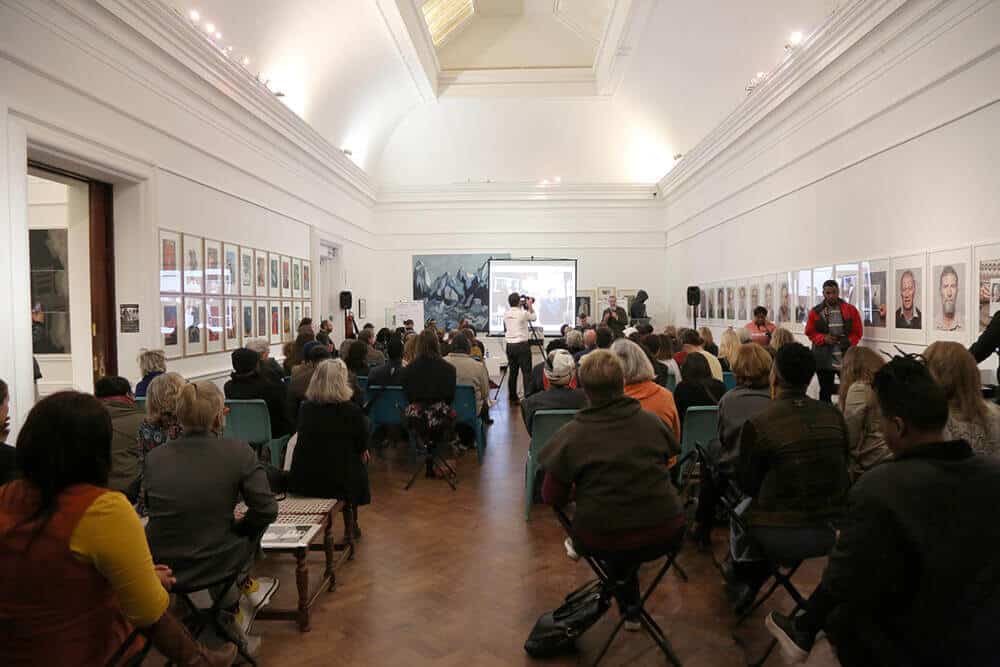 Smithen opened the discussion by declaring that, “all contemporary art lasts for as long as it needs to.” The panellists approached the topic from a perspective relevant to their field of expertise.

Julia Kabat, selected Nicholas Hlobo’s Iimpundulu zonke ziyandilandela, an artwork that poses many questions around conservation and longevity because of the perishable material it is made of, as an entry point. Kabat stated that, “conceptually it is apt that this bird doesn’t last forever,” as the material lends itself to the artist’s intent – Hlobo’s object represents the Xhosa myth of the Lightning Bird, a part of a disappearing oral history; the artist’s adaptation also considers the social taboos of masculinity and violence.

Kabat commented on the risks collectors face because of the precarious nature of the material used in contemporary art, saying, “Collecting contemporary art is a blind process. The collector has no idea how long an artwork will last and what sort of methods one would use to look after the artwork.”

Mawande Ka Zenzile, the only artist on the panel, declared that conservation is not a primary concern of his, saying, “As a creator, it is not my responsibility to figure out how things should last, I’ll leave that to the conservator. My task is to make objects.” He also implied that giving conservation too much consideration could be detrimental to the creative process, “If we always think about the question of longevity some things will never be created.”

Ka Zenzile feels that the way art is understood or talked about is categorised in ways that undermine the value, and origin, of the idea that is the source of the object. He used one of his artworks, Ingqami (The end of an ideology), as a point of departure and commented that “what we term contemporary art discourse is limited to ideological paradigms and art transcends that. It is the responsibility of artists to keep on pushing the boundaries and serve the art itself.”

Brett Scott, the manager of a private collection, used Wim Botha’s Time Machine as an example of an artwork that uses a soon to be obsolete material, fluorescent light bulbs. According to Smithen obsolete technology is one of the priorities of the conservation field.

Scott proposed that unlike public art institutions, private collections can take more risks, such as stockpiling material, because they have no obligation to the public and can acquire and maintain works that public museums would be reluctant to pursue.

Matthew Partridge, an art specialist, chose conceptual artwork by Ed Young – Bruce Gordon – and David Hammons – Bliz-aard Ball Sale – to look at how the gesture of performance enacts the work itself. He probed this with a series of questions, saying, “What I’m interested in is where we place the value of the object. What makes the thing the thing itself? Is it the press, is it our knowledge, is it the information that is gathered around it? Do we place more emphasis on physicality or the idea that permeates the presence of the artwork itself?”

Partridge suggested that work in the ilk of the examples he chose speaks on the capriciousness of the art market. And on the question of whether contemporary art should last, he put forward that art is in a ‘perpetual state of becoming’ and questioned whether the notion of lasting art gestures to the future or the past.

The audience posed questions around the issues of documentation of art and whether the legacies of artists will last if there is no material culture linked to them. Brett Scott responded to this, saying, ‘hopefully contemporary artwork can last even if it isn’t in its original form,” while Mawande Ka Zenzile offered that objects in museums are more than just material objects, they’re also ‘mythological objects’ and referred to how dinosaur dioramas, made of myriad materials, exhibited worldwide still represent their flesh-and-blood prehistoric precursors.

In closing, Patricia Smithen remarked that while art may or may not last, the conservation of art should not impede the creativity of the artist.

‘Should Contemporary Art Last’ was a panel discussion that took place as part of Specialist Conservation Week at the Iziko South African National Gallery.