in News Articles 2013
Share on facebook
Share on twitter
Share on email
Share on whatsapp
On 28th July 2015, Kendell Geers sent out a newsletter with the details of a gift that he was offering his subscribers – an homage to Marcel Duchamp, who was born on 28 July 1887. The newsletter contained instructions, calling interested subscribers to participate by responding. In doing so they would receive digital files, from which the recipient could then create their own rubber stamp of Marcel Duchamp’s signature – a version of the original artwork created by Geers in 1997.
ART AFRICA spoke to the renowned South African artist about his ‘free artwork’ campaign, Marcel Duchamp and a “new value system.” This interview appears as original content in the September Digital Issue of ART AFRICA. Download the app for FREE here for Apple and here for Android. 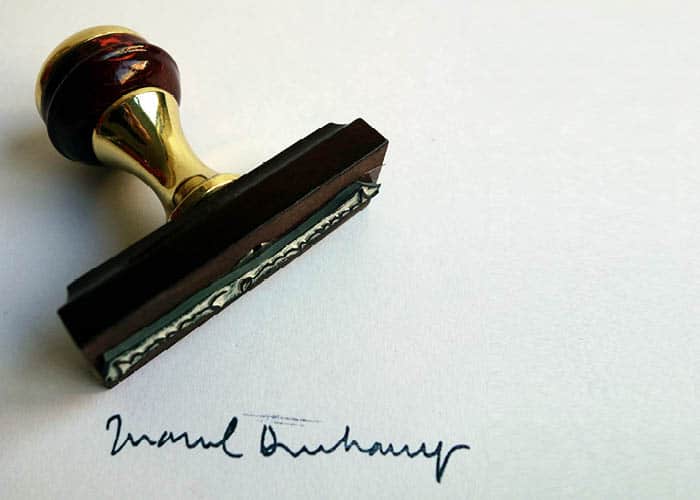 ABOVE: Original rubber stamp of Marcel Duchamp’s signature, as created by Geers in 1997. Image courtesy of the artist.
While the stamp design must remain the same, the choice of handle and physical support is left up to the subscriber. Once made, the subscriber must photograph the stamp and send the image back to Geers, who will register the production and send the subscriber a certificate of authenticity with edition details. Once the certificate has been issued it cannot be altered and the edition is limited to “the number of people who make the effort to produce the artwork.” The gift is restricted to subscribers of Geers’ newsletter only, with the deadline for the project ending on 2 October (2015), the date of Duchamp’s death.
ART AFRICA: By ensuring that the dimensions and design of the stamp remains consistent throughout, you’ve created a network of links between yourself, your subscribers and Duchamp, the project’s nucleus. This approach – of stripping something down to its bare essentials – is something that comes up a lot in your work. In doing so, what are you hoping to achieve?
Kendell Geers: I don’t think that there is a link at all with Marcel Duchamp. The rubber stamp of his signature is symptomatic of the ways in which art gets instrumentalised today. The art market does not care much what artists’ think, say, or intend, and use their work in any way to score profit. With the stamp now, anybody can be an artist, and can stamp anything as a work of art. There is nothing stripped down about that contradiction because now the entire world is ‘Signed and Sealed’ as a work of art.
In 2014 you gave a talk at the Luminato Festival in Toronto titled Following the Blind Man (Marcel Duchamp and the Voodoun Connection). During the talk you said that you liked “the idea of absent masters.” As an artist who has followers globally, sending a digital newsletter to your subscribers created an exchange that transcends any specific context, other than the individual subscribers’ relationship with you and their knowledge of Duchamp.
In this space, the work takes on multiple meanings that extend beyond any sense of ownership. How do you think this work fits into the context of your previous works or that of Duchamp’s?
In an art world that measures the value of art by scale and price, I wanted to offer the gift of a work of art that is given away freely and which fits into the palm of your hand. It’s small and priceless. I offer this gift to the people who support me because it’s important that people understand that my art is not influenced by any market, but guided by respect.
In the same talk you spoke about African masks within two contexts. The one mask that sits in the museum and its identical twin, which can be found with its maker, serving a specific purpose in and of itself: “The one that was never used is considered a fake, a curiosity” whilst the other provides “a different way of seeing. It’s not about metaphor; it’s not about poetry. It’s about embodiment, and it’s a complete embodiment of a spirit to become the spirit, and it’s because of this channeling that the sculpture – the object – then has value.”
How do you feel this exchange, which is reminiscent of Duchamp’s interest in the signature R. Mutt, acts as an embodiment of his spirit, in its original context?
I am not sure that there is much exchange between Duchamp and myself in this process. I stole his signature and am giving it away to my friends for free. The ‘Lost Object’ of his heritage and legacy now belongs to everybody who has my licensed permission to stamp him out of history.

In an interview with Andrew Lamprecht, published in the March 2015 edition of ARTsouthAFRICA, you said, “The jester is [your] patron saint.” You also said that “the role of the jester is to give and take.” If anything, what are you taking from this gift and who would you say the gift is for?

In German the word ‘gift’ means poison. I once made a large Cor-ten steel sculpture of this word and called it False Friend. Marcel Duchamp’s best (false) friend Man Ray made a work called Gift, which consisted of an old iron and tacks stuck to the hotplate. The question you ask is answered in as many ways as people make the effort to consider my proposal; “What you are regarding as a gift is a problem for you to solve” (Ludwig Wittgenstein).

The project is exclusively for your subscribers. What was the motivation for this? Did it have something to do with the idea that one should be familiar with the context in which something is born? Is it important to you that the work be viewed in relation to the rest of your work?

My art and practice is personal and an exchange between myself and the people who make the effort to engage with what I’m doing. I don’t make art for art fairs; I don’t have any assistants and don’t value my work by price or sales. I value every person who respects what I do and for this reason have offered them a private exchange that is, by definition, outside the confines of the art system as we understand it.

There is very little (if no) information about this project anywhere on the Internet, not even on your website. For most people out there, it simply doesn’t exist. Is this intentional and if so, why?

On a completely unrelated note, you recently stated (via your Facebook status) that you’d be leaving the social media realm for good. What is your motivation for this?

I have just written a twenty-five-page text about this for a magazine called the Fenris Wolf. I cannot reduce my reasons to a sentence.

You can still participate in this exchange with Geers by signing up to his newsletter! Receive the ‘gift’ and create your own ‘original Kendell Geers’ artwork by subscribing here: http://kendellgeers.com/library/infos/321