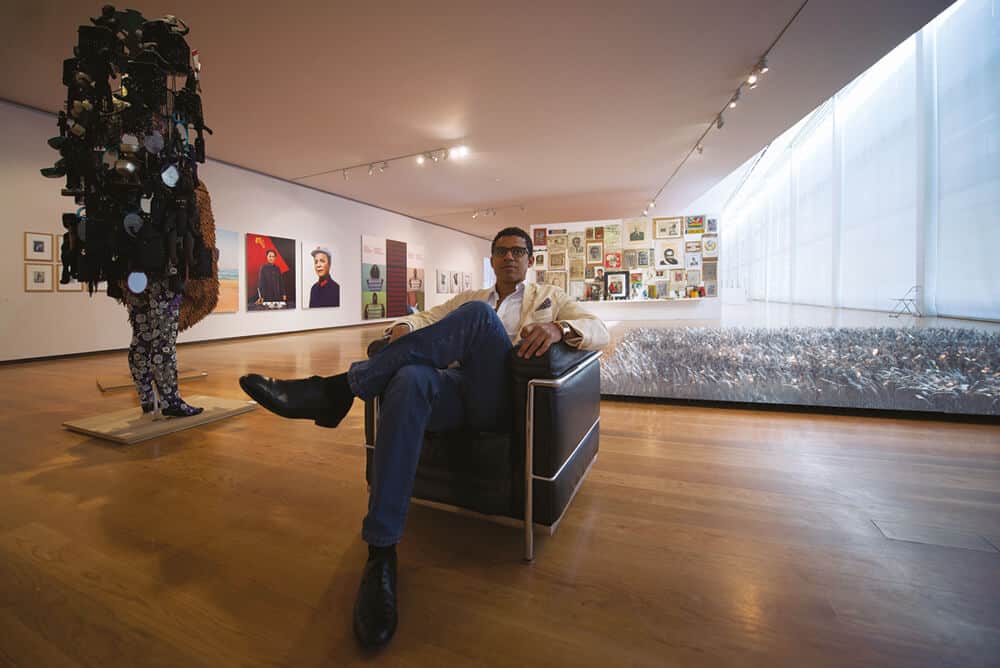 Kendell Geers (KG): It was exactly a decade ago that you supported the Africa Pavilion at the 2007 Venice Biennial. This year you have supported the Luanda Triennial, this issue of ART AFRICA magazine, as well as the 17 African artists in Documenta14. The Sindika Dokolo Foundation has stepped in on numerous occasions to support artists from the African continent as a patron as well as through your collection. Why are you so committed to supporting African artists?

Sindika Dokolo (SD): I strongly believe that some pre-colonial African countries or civilizations have reached the pinnacle of a relationship between man, culture, and artistic practice. I feel that it’s very important for the African artist to rediscover that heritage. Africa has something powerful that it could bring to the art world and the ways art intervenes in our globalised life. In order to do that though, there needs to be a conscientiousness in working through the influences of inspiration and identity. It can sometimes be frustrating. The whole concept of African art is very complex and rich in iconography, symbolism, and form. In working with our powerful cultural wealth, African artists could open new doors, understandings, or readings of who we are, what we could be, or what we need to become as a creative force. The important thing is to push the artist as much as possible, enabling them to be exposed to the world and reach wider audiences, even in areas that are sometimes uncomfortable. It is one of the priorities of my foundation to support the production of art, as well as promote African artists to exhibit their work in Angola, throughout Africa, as well as the rest of the world in order to change the ways we understand African art today.

KG: What do you expect in return from your patronage and support?

SD: I would like for young African artists that are learning so much about western art to do the same research about African art.

When Picasso looked at African art he saw an art so powerful and beautiful that it inspired him to become the greatest artist of his age. That respect for African art should be better understood as the revolution it was. African art deserves more than a chapter in the history of art. I would very much like African artists today to understand that influence and to revisit the art of their own continent without having to go through the eyes of Picasso.

KG: Your name and reputation suffered a great deal following the 2007 Venice Biennial with a smear campaign questioning the origins of your wealth. I always found the accusations to be racist because no questions were asked during the very same Venice Biennial of the Ukrainian Collector Victor Pinchuk, or the French Billionaire François Pinault. It was a classic case of European Colonial racism to question African money, as if all African money is dirty and all European money clean. For the record, please could you comment on the allegations?

SD: People don’t need to like other people, but I think there has to be a general principle of law and respect in this internet age of networked media. Today, you don’t have to be guilty of anything to be accused through internet-based urban legend and mob justice. It is true that there are a lot of things that Angola can be criticised about, but it doesn’t mean that people have the right to start a smear campaign, full of accusations and insults without any facts. There are no solid elements to back any of the accusations, especially since today it is completely impossible to make any bank payments without traces of public record and fiscal scrutiny.

I strongly believe that some pre-colonial african countries or civilisations have reached a pinnacle of a relationship between man, culture, and artistic practice. I feel that it’s very important for african artists to rediscover that heritage.

I don’t have much to comment on that. If I do start maybe I’ll say too much on how the world works. Clearly there are interests to keep Africa from having a strong, empowered elite. For every 1 black, African opportunist who has stolen money from Africa illegally, or immorally, there are 999 whites, mainly Europeans, who have done far worse. It’s a bit unfair that nobody would question that. If you look at a lot of the very large fortunes around the world, you will notice that many have their origins in an exploitation of Africa. Why don’t you ask these people how many jobs they created in Africa, or how much tax they paid in Africa, how much of their wealth and profit they have reinvested in Africa?

KG: There are very few museums of art anywhere in Africa and it’s extremely rare for any African government to support the arts. Would you say that private foundations and individual patrons have a role to play in supporting the arts?

SD: Yes absolutely. Anybody who can do anything about it should. I feel that I have a responsibility to support the arts, even when I might not personally agree with the artist or their work. Perhaps I should rephrase it the other way round and say that there are a lot of people who don’t like me, appreciate my patronage efforts, or share my views, but I still see it as important to support. In some ways we need to create new role models to inspire new forms of patronage. If you look at the number of multi-millionaires and corporate growth on the continent today and compare that with the growth and number of art institutions, it’s not proportional. With encouragement, the new African millionaires could become patrons and help in the development and support of a powerful contemporary African art rooted in the continent. I am talking about African people who identify themselves as African and not people or corporations making money in Africa. Our governments could make more of an effort in celebrating their patrons and collectors to create some synergy that starts to drive the engine of the locomotive of support and patronage. The challenge is to create an understanding of just how important it is for governments to acknowledge the individuals and corporations who do support the arts, building a bridge rather than seeing them as competition. In my case, I have been very lucky because the foundation has been built, on  one side, through the hard work and efforts of an amazing team led by Fernando Alvim and Marita Silva, and also the support of the Angolan government. Without the supportive relationship of the Angolan government we would never have managed to have the impact that some of our projects have had.

SD: I think it’s an exorcism of mental slavery or an exorcism of broken identity, perhaps. I see it as a desire to take control over our own creative process and be the authors of our own narratives, the mending of a spring that has been broken by the Colonial processes. It is really a question of self-confidence through identity. African people have for too long been forced to adapt to systems and traditions that come from other places and that are clearly not developed in our favour or to our advantage. We don’t have enough self-confidence and courage to question or even study them. We are not thinking about the alienation of the process. There are far too few artists and thinkers that are their own centre of gravity, able to guide and inspire other African artists and thinkers. There are not enough role models. Think about the disappearance of African centred ideologies and semi bankruptcy of the continent after the independences. Even though there has been a lot of growth and political development, I don’t think there is a single country that is anywhere near the levels projected when they became independent. Nobody stands out, nobody is stepping up with a strong-minded, determined and self-empowered voice projecting their thoughts and dreams to guide and develop new, more powerful traditions and identities. We’re just eating what’s been given to us. This is mental slavery.

KG: You have used your political power and financial influence to find, acquire, and repatriate works of art that have been stolen from the Dundo Museum and repatriate them from the European market back home to Angola. This is a very powerful statement that directly speaks to hundreds of years of Colonial looting and cultural theft. Where would you draw the line in terms of repatriation? Would you demand that the British Museum also return the Benin Bronzes and Elgin Marbles?

SD: The works of art from the Dundo Museum were looted from the museum during the civil war and are now being sold regularly on the secondary market in auction houses. The museum has since been restored and is now in perfect condition, so there is no justification whatsoever why these pieces should not be returned. It is an easy battle to win and set in motion, the repatriation of works of art stolen from a museum under the smokescreen of conflict or war. It’s more difficult to convince institutions like the British Museum that their collections are not just exotic stolen artefacts, but that they are in possession of key objects and symbols of our African identities. They are more than works of art and essential in the building of the new African identity. On that basis, these museums have a real responsibility and need to do something about it. They could at the very least organise conferences or educate young African scientists, making these works more accessible to the African public. Furthermore many of these collections were built by the violent force of an occupier in a delicate environment, works of art violently stolen or looted from palaces, museums and temples. This is not a uniquely African issue, but a real global problem. These are very important cultural as well as political questions and it’s absolutely fundamental to take on this fight, even if the prospects of winning are not obvious. We have to begin the process of banging on their doors in the hope that our children or grandchildren will manage to push them open, or to break into them, and our heritage is returned.

Read our article ‘On the Sindika Dokolo Foundation and art’s exceptionalism’.

FEATURED IMAGE: This is an image during the official Ceremony in Luanda where 3 stolen pieces from Dundo Museum have been officially presented to the Angolan authorities on the very symbolic date for Angola of February 4th in presence of the President of Angola, His Ex. José Eduardo Dos Santos and King of Chokwe, His Majesty King Mwene Muatxissengue Wa-Tembo. This ceremony took place in the Presidential Palace in Luanda. Image courtesy of the Sindika Dokolo Foundation.