Délio Jasse was born in Luanda in 1980. When he was 18, he moved to Lisbon where he started to work in Serigraphy Studios. Here he had his first contact with different printing techniques, through which he soon discovered photography. He began experimenting with the technical possibilities of this mode of expression and was especially fascinated by alternative processes like the cyanotype, the platinum/palladium print and the Van Dyck Brown. Jasse’s work is currently on exhibit as a part of the official Angolan Pavilion at the 56th Venice Biennale. This interview appeared in snapped 05: The Digital Issue. 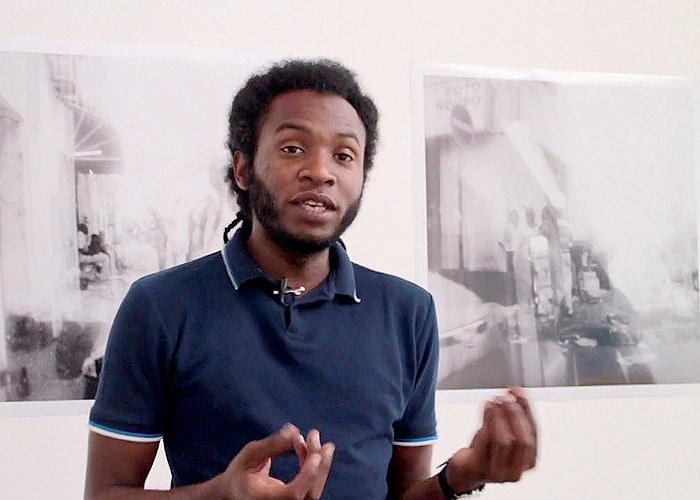 snapped: Hi Délio. Thank you for taking the time to speak to us about your photographic process. Firstly, how would you describe your work?

Délio Jasse: I would define my work as a constant “work in progress,” a never-ending experimentation that uses photography as its main tool.

What led you to photography?

I fell in love with photography after working in a screen- printing atelier. There was a photography studio within the atelier, where we created photoliths by separating the colours. I’ve been a fan ever since.

So would you say that your work is photographically inspired?

I am inspired by the notion of experimenting with photography, but as you can see, my interaction with photography is not conventional. By layering and superimposing my images, I lessen the depth of field that is commonly associated with photography. So yes, to answer your question I would say that I am photographically inspired, even though I would not label my work as purely photographic. Although it is essential to my work — being the starting point of my experimentation — it is not the cornerstone of my speech.

Are there any African photographers that inspire you?

I don’t really have an “African” inspiration, even though there are many African artists whom I admire and respect. I admire artists who are unafraid of experimenting with the different options offered by the photographic medium.

How do you feel about the statement “Everybody is a photographer?”

At your first exhibition in South Africa, ‘Ausência Permanente’ at SMAC Cape Town in 2014, your work was likened to a palimpsest. What does this mean? Do you agree with this statement?

In Nancy Dantas’ words, “the term literally refers to the reading and publication of manuscripts where scholars uncover, examine and piece together layers of rewritten text.” My work is focused largely around the concept of the latent image and its deeper meaning, which is why I create my work in a way that forces you to interact with the piece, allowing time for the hidden messages to reveal themselves. A lot of the process is dedicated to connecting the elements through the various layers to create the narrative for a unique story. My recent series, ‘Ausência Permanente’ is a perfect example of how I incorporate the latent image into my work.

Is this why you chose to produce the ‘Ausência Permanente’ series as an installation?

I have always been fascinated by installation pieces. I believe that the physical dimension of the images, regardless of its printed medium, is as important as the actual object that has been photographed. For ‘Ausência Permanente,’ the choice of presenting it as an installation has two interconnected reasons.

Firstly, I primarily wanted to change the way that we look at images. We are accustomed to images being presented to us in horizon view against a wall. We therefore gaze at them head-on, seeing only what it is directly in front of us. By displaying the images on the floor, I forced the viewer to shift their typical viewpoint and consequently their interaction with the piece. The installations direct the viewer to wander through the project, encouraging them to take a deeper look into the story behind the chosen subjects.

My second motivation for the unique presentation is that I created the images with numerous layers of information. By compelling the viewers to interact with the pieces, they are given the chance to look at the picture both horizontally and vertically, allowing themselves more time to see and ‘read’ all the elements present in the image. Hopefully they are then able to experience the images in a comprehensive way. I think that had I chosen a more traditional presentation for the work, the viewer would have missed some (or all) of this fundamental information.

What deeper meaning were you trying to relay to your audience when creating ‘Ausência Permanente?’

This series focuses on how the remains of our past can influence our future. I hoped to provoke the viewers to reflect upon their own histories by incorporating the credible material that I collected on my subjects and transforming it into an interesting art piece that played a narrative role. 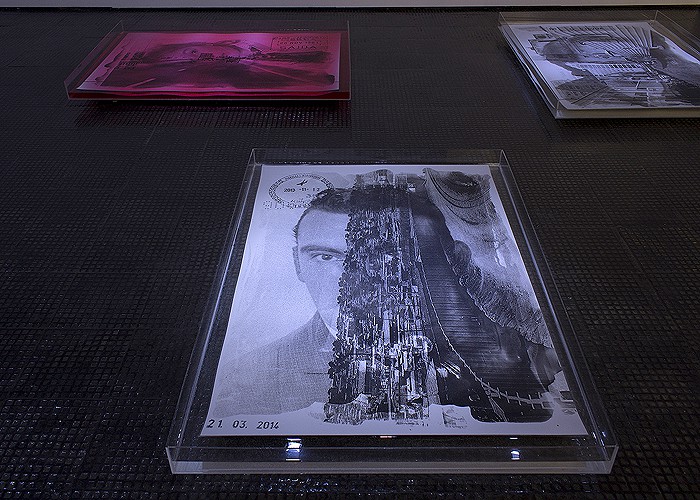 What was the purpose of creating an environment for the images by floating them in water baths?

My work has always held hidden messages that are only revealed once having spent time with the piece. Part of the image creating process includes having to settle your print in a developing tank and wait while the chemicals work their magic and reveal the concealed image to you. By capturing this process, I furthered the notion of the ‘latent image.’

You were born in Angola and moved to Portugal. As an artist in Angola, were there any struggles that affected your practice?

I only began to experiment as an artist when I moved to Portugal, so I can’t blame Angola for any issues that I have encountered as a creative thus far. I do however still visit Angola and even though the situation is somewhat uncertain, it is definitely an exciting time for Angolan artists in terms of being discovered. There are already a few galleries and institutions that aid artists in further developing their work, but unfortunately due to the country’s financial situation proceeding the civil war, it will still be some time before Angola has the extra capital needed to help support these budding artists.

You focus largely on the ruins of the Portuguese empire; are they a part of your personal heritage?

I can’t deny that my attraction to the ruins stems from believing that I can somehow relate to them through my great grandfather, who was of direct Portuguese decent. Although I am proud of my heritage, I cannot say that it was the intended theme for this body of work. This is a good example of how I utilise the hidden message in an image. By photographing the ruins, I aimed to create a contrast between what the image originally represented, and what it symbolises now.

You managed to create very intricate installations by including people’s passports, visas, letters, albums, photographs and even death notifications in the various tiers of your work. How do these inclusions further your concept?

I’ve always found the endless possibilities of the imagination fascinating and derive great inspiration from how an entire story can be created with the help of a single clue. By incorporating these tangible clues into my work I aim to suggest that there is a significant story waiting to be told. When the gap between the past, present and future is solidified, the notion of what was and what is can be appreciated.

What are your thoughts on producing art using digital technology, a practice that has become definitive of our modern era?

I believe that artists should be encouraged to utilise all the materials made available to them, providing that it furthers the concept. Personally, I try to rely as little as possible on technology for fear of losing the authenticity of my work. By interacting with each element as I arrange them piece-by-piece into a body of work, I create a completely unique style that cannot be forged by digital machinery.

What do you believe constitutes photography today? Is it still considered to be a static image, a captured memory in time, or has it now moved beyond that into a new realm?

I think that photography will always refer to a ‘simple’ still image, but it has slowly branched into something else, a tool that goes beyond the image that it represents. I find it really interesting how both approaches are in full force today.

What can we expect from you in the near future?

Well, I will keep experimenting, that’s for sure!