Seeking to more fully explore the artistic practices of emerging and established artists working both locally and abroad, the Investec Cape Town Art Fair introduced ‘SOLO’ – a selection of solo presentations, with this edition curated by Nontobeko Ntombela.

In its first iteration, ‘SOLO’ is dedicated to women artists only – at once offering different perspectives on the wide-spread socio-political issues women face, and highlighting their significant contribution to the art world.

ART AFRICA spoke with these artists to learn more about their art-making practice, and the conceptual narratives behind their work. 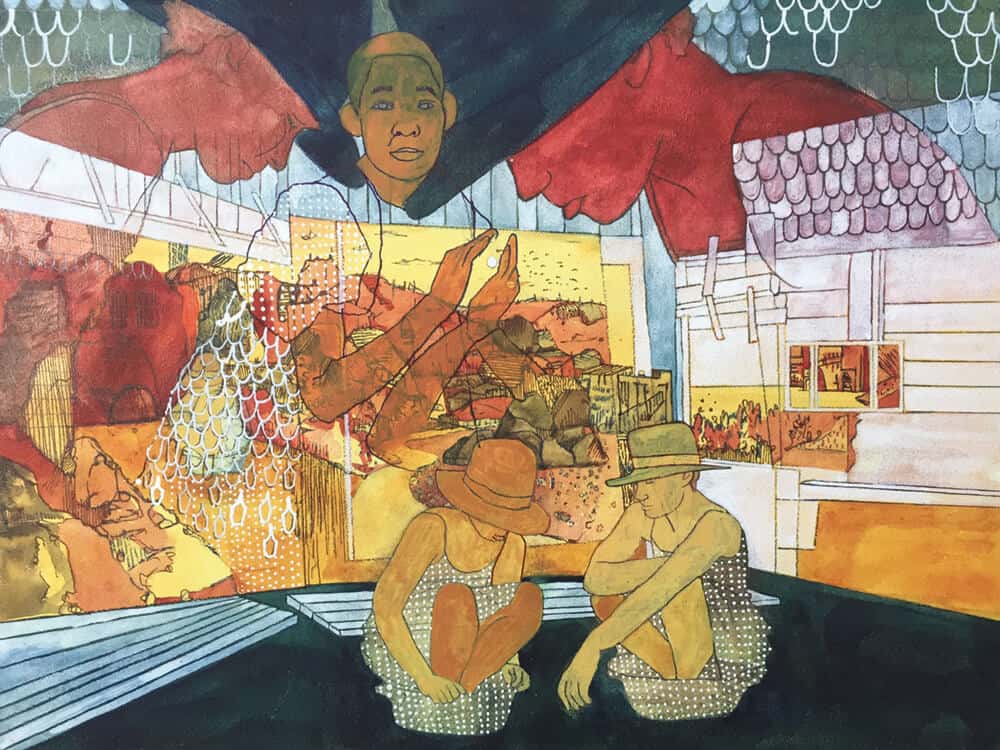 Driven by a fascination with mythologies and scientific theories, Pamela muses on the origins of time, transnational identities and ideas about the universe in her paper works, large-scale installations and stop-motion films.

You have lived and worked in various locations across the world, and your work has come to address the development of transnational identities, human connections, and cross-border rituals. In what ways has your nomadic upbringing influenced your practice, and why are these themes best communicated through an interdisciplinary approach to making art?

My work is based in drawing and includes works on paper, installation, animation, and performance. I am currently interested in using my work to explore parallels between ancient cosmology and advanced theories in science. I find it fascinating that both our most ancient ancestors and the most futuristic scientists have always been asking the same questions: Who are we? Why are we here? How was the universe made? What is it made of? Of even greater interest to me are the constructs of power – often politicised – that have fuelled the quests to answer these questions.

In my early work, I was building a mythological narrative that was loosely autobiographical. I had invented an alter-ego, named Asme, who became the hero in the narrative. This mythology was driven by a concern for my own complicated experience of my own identity. My mother is from Botswana, where I was born, and my father is Canadian. I grew up living in many different countries and cultures. As such, my sense of identity was fluid, trans-cultural and trans-geographical.

Linking my interest in mythology and science is a subtle politic at work in my process of image making – I believe the act of imagining is a political action. More to the point, as a contemporary African artist, I believe the act of imagining and occupying a yet-to-be-known future is a particularly radical political action. I point here to Deleuze’s writings on ‘becoming’ in which he describes that a people oppressed is at its most powerful and most potent when it is in a state of ‘becoming’: that is, a fluid, yet-to-be-known form. As such, I often think of my work as diagrams, schemas, maps, beacons, and navigational devices that are invocations to a radical yet-to-be-known identity. 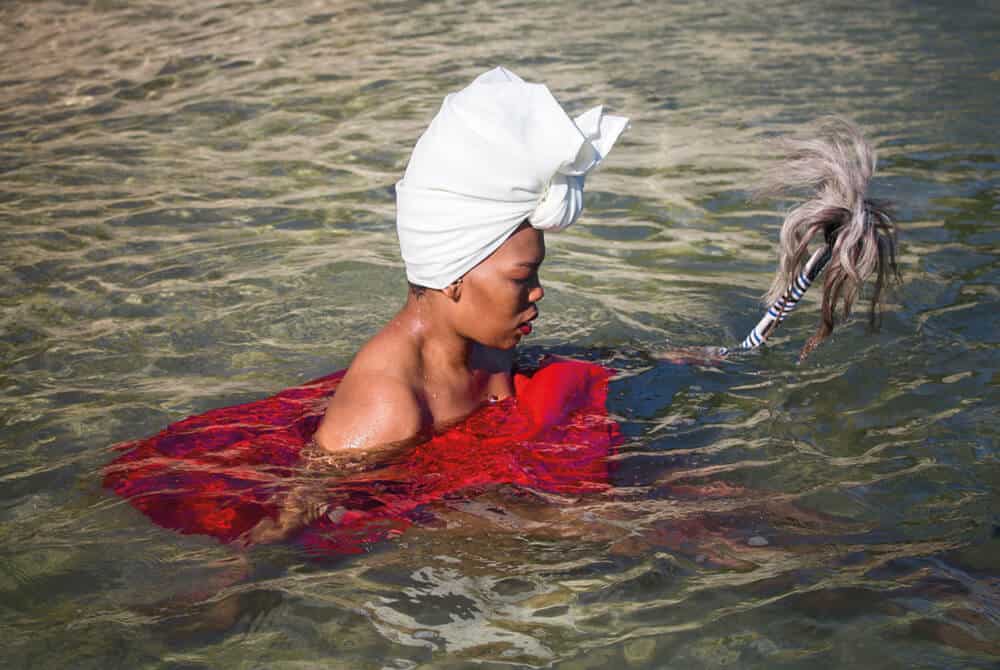 Interested in the intersectionality between the ‘real’ and the ‘performative’, Lhola conceptualises artworks that deal with issues of contention – socio-economic and political conditions of race, gender, sexuality, and geographical location – and seamlessly negotiates the role of orator, activist and sage.

It’s almost one year since your debut solo exhibition, ‘Looking for Ghana and the Red Suitcase’ at SMAC Gallery, Stellenbosch. How has your artistic narrative developed since then, and is your work still largely focused on ‘imagining Africa’?

The more we have interest in ourselves and go searching, the narrative shifts. The more I investigate ways for collective healing for black people, the more I’m drawn to the wound – what the wound is and what the wound is made of. To heal, we must know where it hurts and why. And I’m not speaking of generalizing black pain but of unpacking the complexities and nuances of black displacement and dispossession. If we must truly imagine Africa, then we have to truly look at its wounds and which mechanisms have kept these wounds festering in what we describe as a post-colonial, decolonised, independent moment and quite frankly how these wounds have been normalized as everyday existence and who gets to benefit from them.

My artistic narrative is largely shaped by unpacking historical narratives and imagining Africa – thus the work emerges from that space in between, the doing space.

My point of departure in imagining Africa is to look at this current moment in Africa and say, well, this is what decolonised Africa actually looks like – because we have already done the work of reimagining and repositioning ourselves through systems, infrastructure, institutions that know how to discriminate and kill us. Now to imagine Africa possibly requires a new set of sensibilities to shift our language, our thinking, going beyond the context of decolonising because we already know what that has given us. 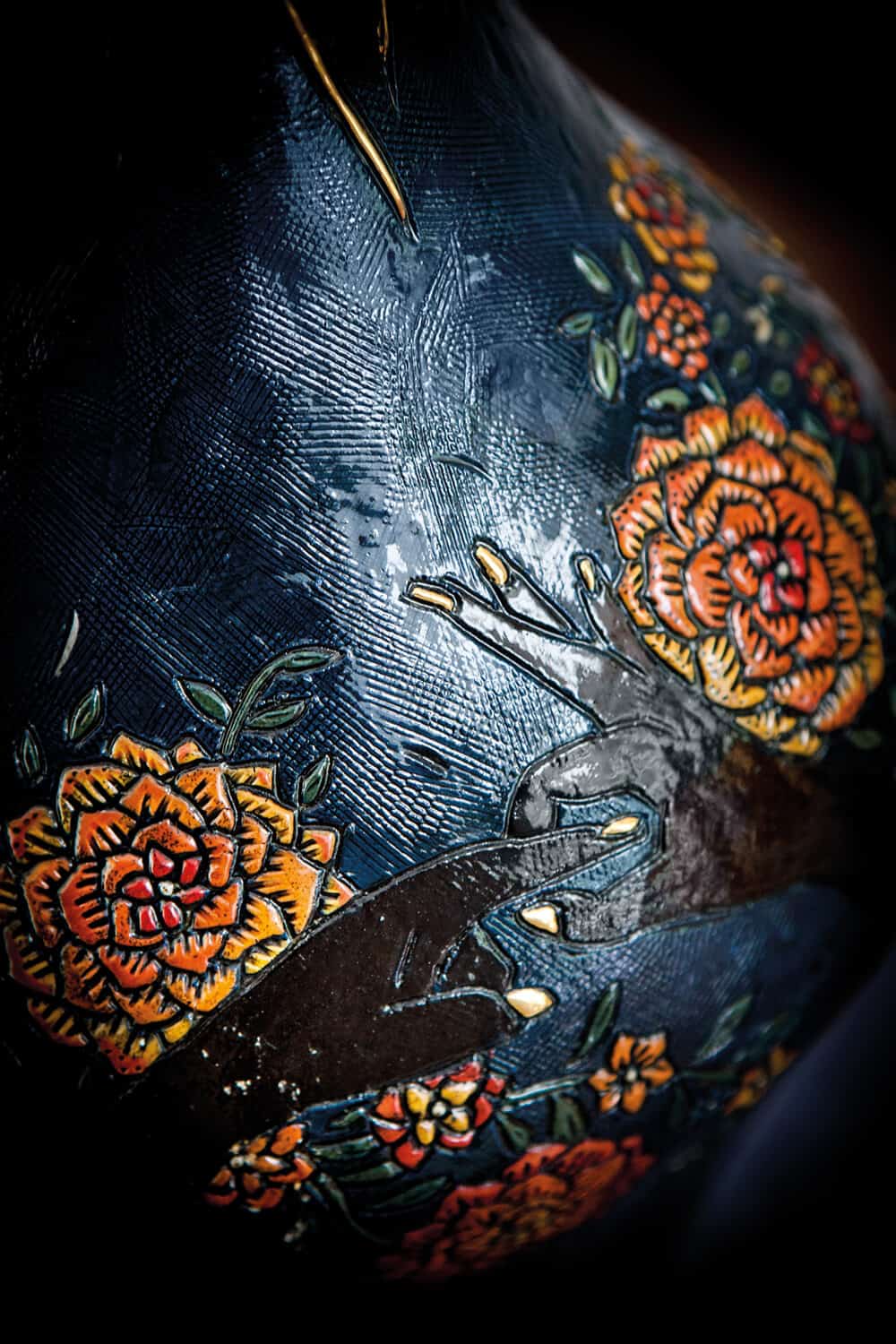 Working primarily in ceramics, Mudge’s vases are rich in colour and intricate in detail – they come together in a single unity to celebrate humankind’s capacity for contradictory impulses.

Working with ceramics, your subject matter is largely centered around both the beautiful and the violent, and yet still emits a sense of humour. Why is it important for you to maintain this presence of humour, irony, and sometimes mockery, in your work?

By making ceramic vases I am fitting into a genre that is almost as ancient as humankind itself. I often reference the decorative design from, for example, a 14th century vase, or an art deco vase – and then add to that foundation my own text or images. We are familiar with the image of a decorative vase, and then we see it offset by something unexpected.

I use humour, irony and mockery as a way of asking authentic questions. The work opens to operate on two levels, because it’s sometimes unclear to the viewer if it’s serious or not. The humour you see in my vases is part of who I am and this comes through in my work. I treat the pots as characters that can express what is normally unspeakable.

I am interested in the human spirit – the good times and the bad. I think my vases reflect that. They are glitzy, gold and beautiful, but there is a heaviness there too.

Born in Italy, Maimouna converted to Islam after living in Senegal, and has continued to create art around an appreciation of shared humanity beyond borders – psychological, cultural and political.

Your photographs reveal a true mysticism, often implying a sense of spirituality – and specifically exploring the Islamic faith. In many ways, the photographed bodies seem to defy a grounded relationship to reality.  It is known that you converted from Catholicism to Islam. Has your religious outlook and transition influenced how you create art?

My interest is mainly addressed to the investigation of the Islamic female spirituality. The Muslim esotericism, in particular the one of Sufi’s orientation represents, for me, the authentic and pure path towards the inner consciousness.

Through my practice, I intend to interpret the various aspects of the Muslim spirituality in a more democratic and pluralist view. My visual lexicon aims to underline and to stand out the diverse qualities of the Muslim woman in the western and Islamic society. Doing that, I mainly focus on the study of the mystical veiled body as diversity value, and the discomfort and fascination that comes with it – always trying to avoid a stereotyped view of Islam religion.

Setting, characters, dresses and all the background objects are always chosen by me with great care and attention, because they symbolize my personal research of an inner and aesthetic balance. Even the writings that I include in my works are not only ornamentations, but above all, they must be seen for their esoteric and thaumaturgical significance.

In my latest works, I tried to progress even further, examining the deep connection between the human being and Nature, and how Nature can help to discover our visceral identity. This creates a metaphysical dimension characterized by a perception of “suspension” – a cosmic space that is not dictated by an ordinary and conventional time. 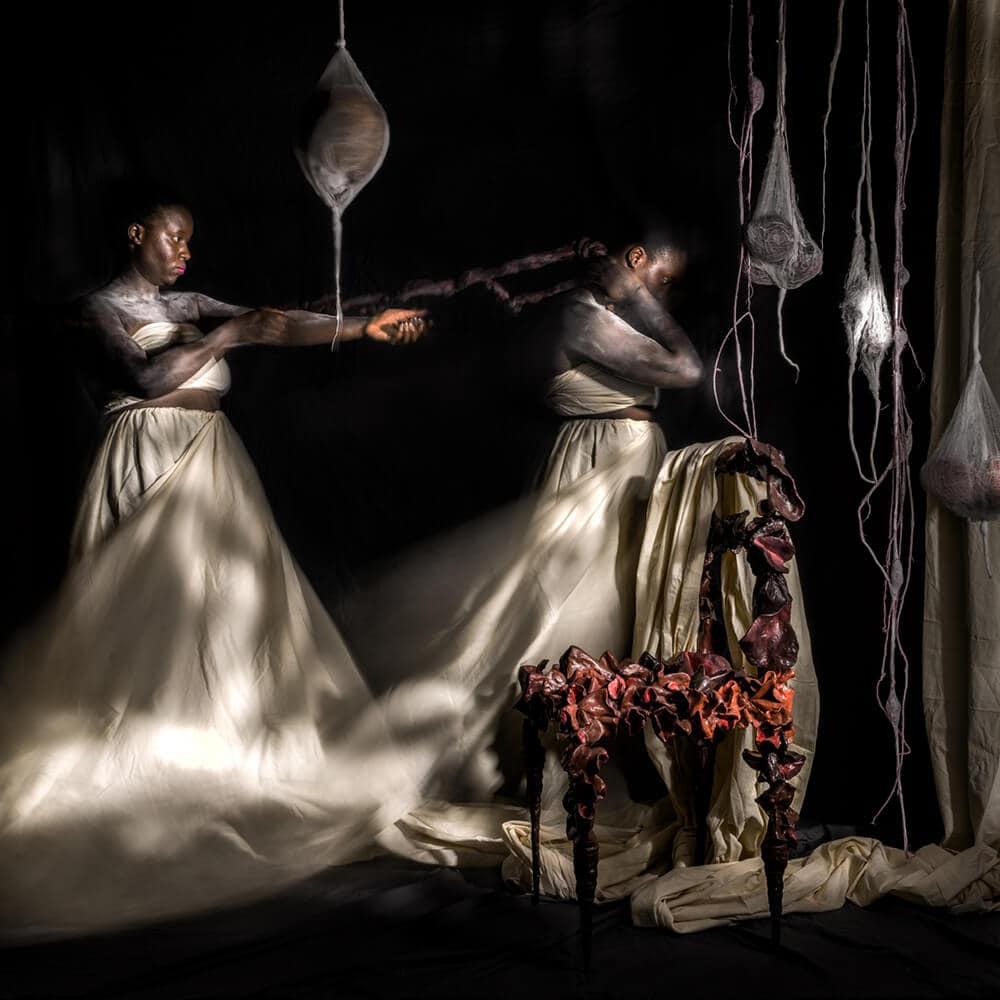 Drawn from past experiences, Stacey’s work considers both the strength and fragility of the female mind, and attempts to critique stereotypical depictions of what it means to be a black woman.

Conceptually your art explores identity and spirituality – focusing primarily on women.  There is currently a global break of silence in support of womxn and the sexual violence suffered. How does your work communicate some of the pertinent issues womxn deal with today?

I like to think of myself as an animist – not only for the overall fascination with the spiritual realm and a few obscure childhood encounters with the mystical, but also because traditionally the Lugbara people of North Western Uganda or West Nile (my ancestral village and birth place) are animists and believe that all material phenomena has agency – that there exists no hard and fast distinction between the spiritual and physical (or material) world and a life oriented towards an inner being. I believe there is a very thin gap between real and surreal.

The work speaks for an inner self. A strength which isn’t seen but felt and that deep link with the soul and mind and what can be overcome. It speaks of a power and ability that can be conjured. Entirely, it highlights the mind’s suppleness drawn from an individual narrative and past experiences. The process of working around with my body in play, is a metaphor to dissociation and transition or transformation from stereotypical depictions of being a black woman – now past the physical state and into the spiritual realm studied from a psycho-emotional perspective. The search cuts through the physical feeling of incompleteness, to the mental instability, my strong spiritual will, and how others relate to this.