Hannah O’ Leary, Sotheby’s Head of Modern and Contemporary African Art, said: “From an international perspective, the interest in and market for modern and contemporary African art has developed enormously over the past decade. Sotheby’s entry into the market with the launch of our sales in 2017 has had an immediate positive effect and been a real game-changer. This is clearly a market that is poised for growth and the opportunities for collectors to get involved right how are extremely exciting.

Our third dedicated auction this October widens the scope of our previous sale, with more countries represented than ever before. This is our best sale yet, comprising works by fifty-six artists from eighteen countries across Africa. We have a particularly strong selection of Ethiopian art, including masterpieces by Afewek Tekle, Skunder Boghossian and Wosene Worke Kosrof, and a painting by Senegalese artist Papa Ibra Tall, which was purchased by jazz legend Duke Ellington in Dakar in 1966 at the World Festival of Negro Arts. With museum-quality works on offer, such as Gavin Jantjes’s  seminal South African Colouring Book, by established artists with a great track record, this is a sale that will appeal to seasoned and new collectors alike.” 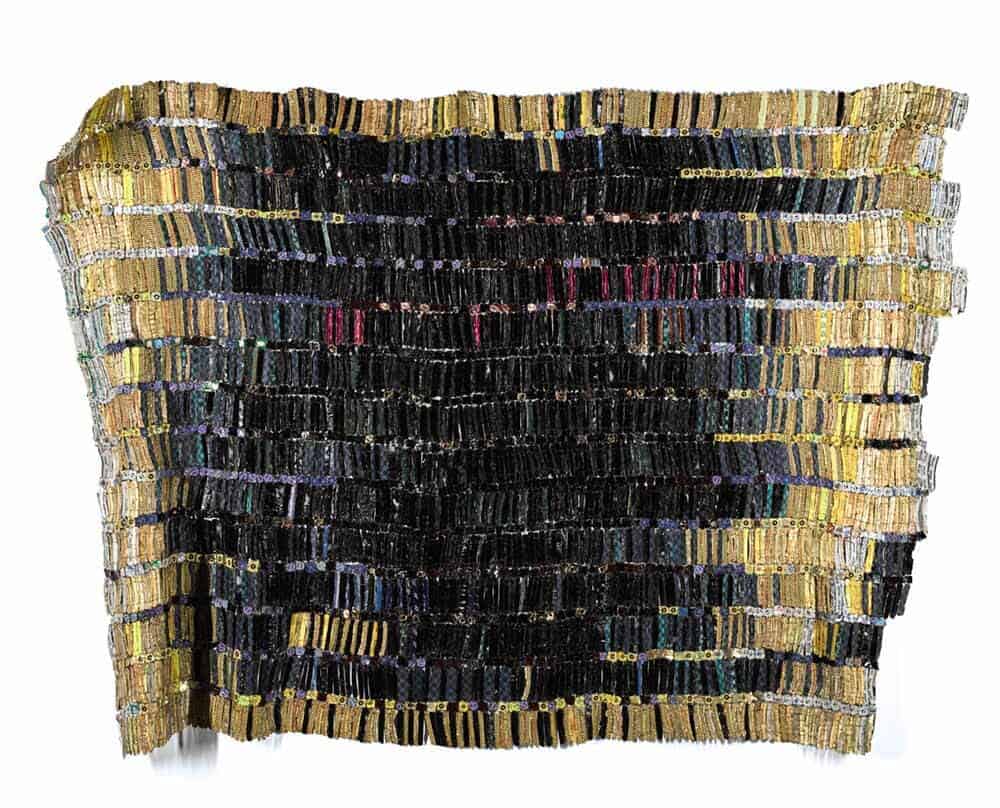 Tagomizor by El Anatsui is a hanging sculptural work made of aluminium bottle caps and copper wire. This glimmering work, part of the artist’s ‘Danudo’ Series, is comprised of recycled bottle caps that are weathered and ingrained with dirt. Tagomizor was exhibited in New York in 2006 in an exhibition which marked the first time the artist’s bottle cap works were shown in North America. Since then, the Ghanian artist has achieved global recognition as one of the world’s leading contemporary artists, with works in many museum collections worldwide. In 2014, he became the first honorary Academician from Africa at London’s Royal Academy of Art, and in 2015 he was honoured with the Venice Biennale Golden Lion for Lifetime Achievement. El Anatsui is set to be the subject of a major retrospective in Europe in 2019. 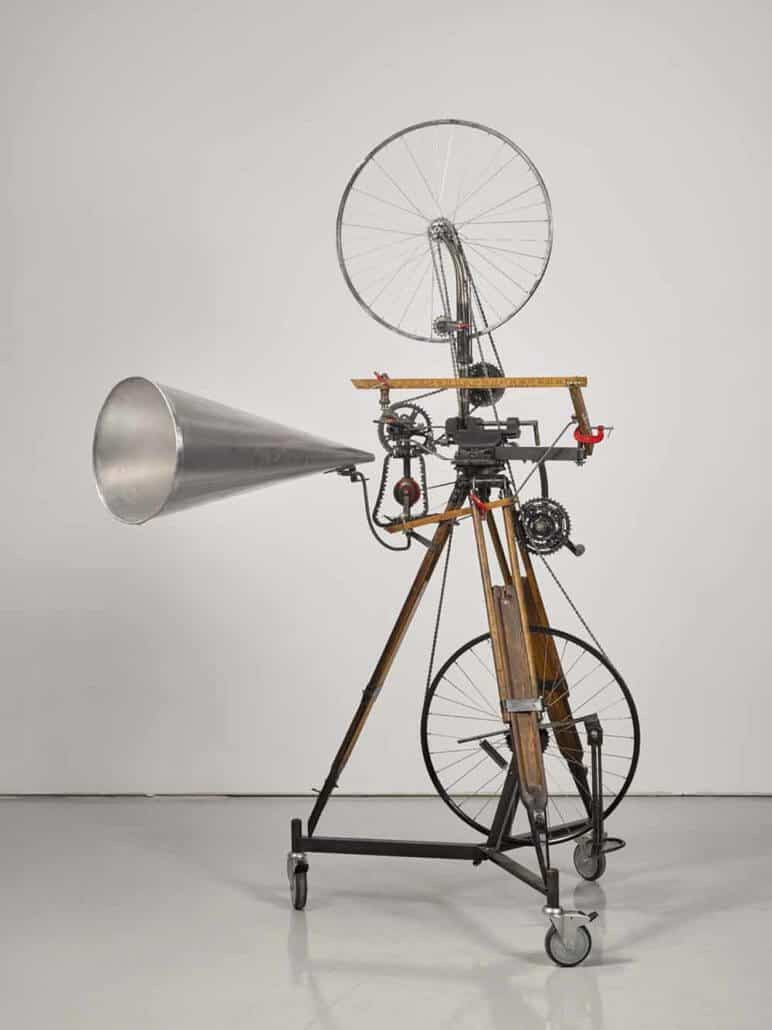 Kinetic Sculpture (Bicycle Wheel) by South African artist William Kentridge is constructed from found objects: the wheels and chain from a bicycle, a megaphone, tripod and rulers. In reclaiming old objects, he demonstrates his artistic process of rewriting and reusing, to create artworks which poetically comment on pre- and post-apartheid South Africa. This work engages the viewer with a handle bar and bicycle peddle which can be turned and peddled, respectively, activating the rotation of a megaphone around the entire structure. The artist, who has stated that all his work is rooted in Johannesburg and its history, has works in the Museum of Modern Art, New York, the Art Institute, Chicago, and Tate Gallery, London. His kinetic sculptures have been used in major productions in recent years, including The Refusal of Time (2012), More Sweetly Play the Dance (2015) and The Head and the Load (2018). 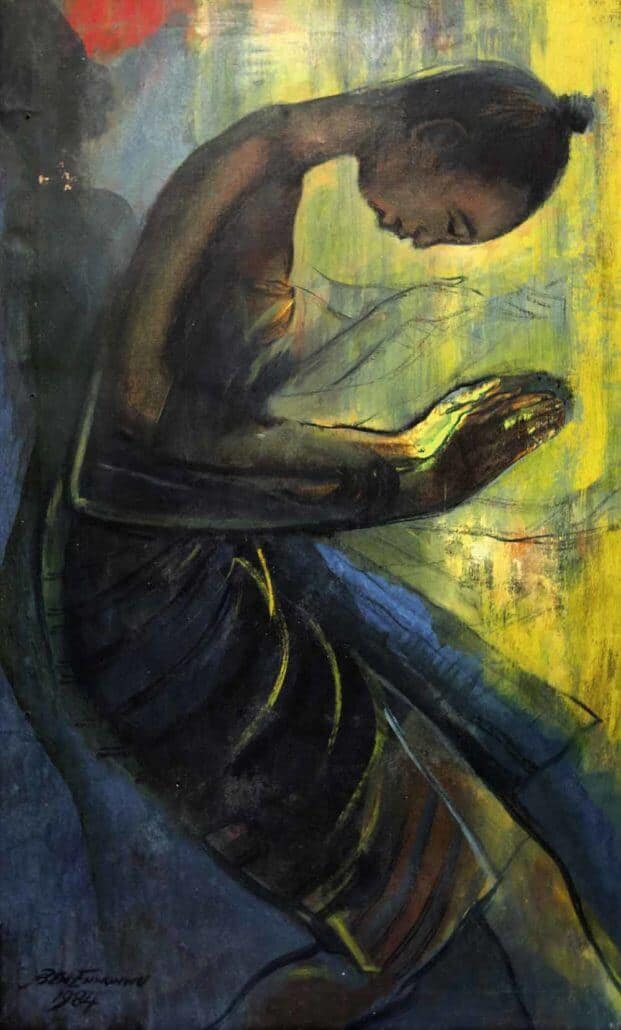 Enwonwu used dance and dancers as a central theme to his work throughout his career. He started his ‘Africa Dances’ series during his time in London in the 1930s, in an effort to illustrate his views on the state of modern Nigerian culture using symbolic imagery, by painting scenes of dance and ritual performance from his Onitsha-Igbo heritage. On his return to Nigeria in 1948, Enwonwu became Artist Adviser to the Federal Government, and in 1949 Time magazine declared him ‘Africa’s greatest artist’. For the remainder of his lifetime, Enwonwu would be internationally recognised as Nigeria’s premier artist. Nigeria gained independence from the United Kingdom on 1 October 1960, and with it the country was in search of a new post-colonial identity. In this period, Enwonwu’s dancers took on another dimension in his quest to represent modern Nigeria, his belief firm “that postcolonial African art must reflect the aspirations of independent African people.”

From Laubser to Lewis: Strauss & Co sale explores the historical context to the ‘Art Figure’ in art