South Africa the Art of a Nation | British Museum, London By Siobhan Keam

The task of exploring a thousand years of a country’s history in one exhibition – particularly one with as contested a history as South Africa – is not an easy one. Yet the British Museum has managed to create an exhibition that is informative and well curated, offering new and surprising insights even for a South African audience. ‘South Africa: the art of a nation’ is a thoughtful journey through the artistic history of the country, from as far back as three million BP through to 2013. While you might think an exhibition of this scope would take the form of a purely chronological curatorial structure, Chris Spring and John Giblin’s sensitive juxtaposition of contemporary work with ancient art objects creates a lively conversation between past and present work. 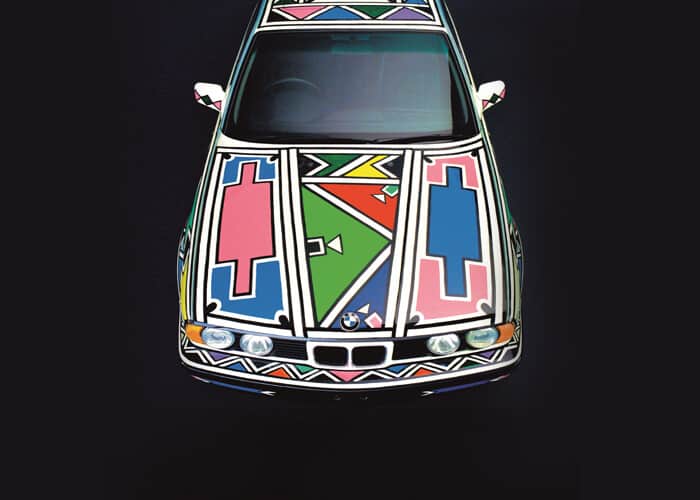 Hosting an exhibition of South African art within an institution such as the British Museum, given the country’s colonial history, would no doubt raise a few eyebrows, yet all of the colonial issues that come to the foreground are properly addressed. There are explanations for why the artists of certain works are unknown (for example the artists responsible for rock art panels and fertility figurines); for how these types of works were problematically collected (as ethnographic curiosities); as well as explanations around the problematic use of terms to describe different cultures (such as ‘San/Bushman’ and ‘Khoekhoe’). The exhibition constantly calls attention to these issues within the Western canon and how they influenced views of Southern African art and culture, pointing out bias behind the colonial myth of an ‘empty land.’ Each work of art is contextualised and analysed with a view to interrogate the context it was created in, as well as how it is viewed in the context of the present. 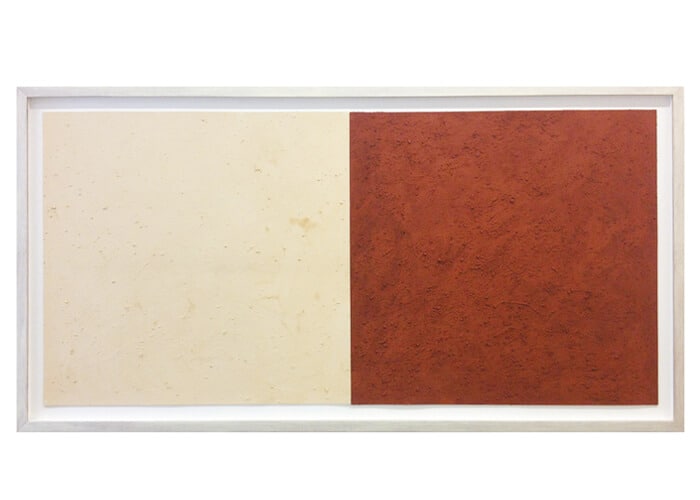 Karel Nel, Potent Fields, 2002. Red and white ochre. © The artist. © Photo courtesy of The Trustees of the British Museum.

As curator Chris Spring explain, “This exhibition examines new aspects of the Anglo-Zulu wars, but also takes audiences into lesser known areas of colonial history, including the Xhosa Frontier Wars (1779–1879), which are little known outside South Africa and yet were the longest of all the colonial conflicts in Africa. The exhibition demonstrates how art by black South Africans collected by Europeans during the colonial period was underpinned by racial assumptions regarding what was seen as the ‘exoticism’ of African people. Collectors grouped artworks by cultural identity, based on language, place and style. Although the collection of these artworks poses problems, their creation does not…”

Produced in 2002, Karel Nel’s Potent Fields features a panel covered in rich ochre soil gathered from the Transkei alongside a light coloured panel with a similar texture. The work carries layered connotations of race, difference, similarity, land and belonging – elements which the curators consciously deposits alongside San/ Bushman rock paintings that were created hundreds of years earlier. This effective strategy, of juxtaposing ancient art objects with contemporary artworks, is used in the accompanying catalogue, published by Thames & Hudson in association with the British Museum. Both the exhibition and the publication take you on a journey, from the incredibly rich rock art – the removal of which from its original location is duly addressed in the catalogue – to the contemporary work they inspired, leaving no representative stone unturned. 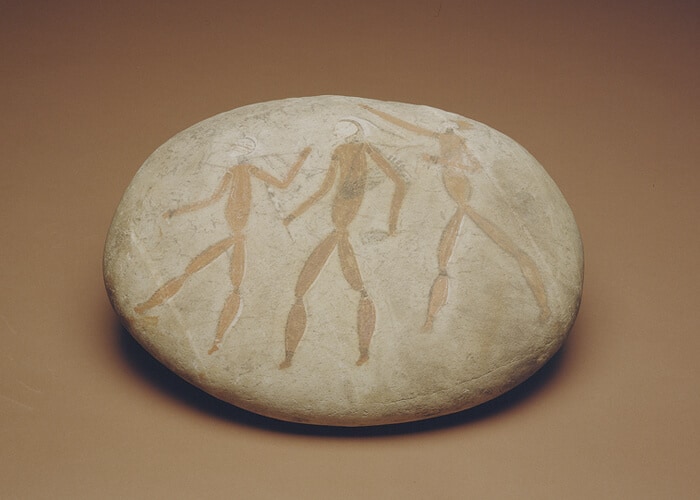 The Politics of Person

Portrayal of people is a highly contentious and political issue, particularly when viewed through an ethnographic lens. Tackling this head-on, the exhibition includes illustrations from Samuel Daniell, ostensibly intended by Daniell as a recording of the different ethnicities in South Africa at the time. The work is accompanied by wall text acknowledging the issues with this type of record, which explains the romanticism and exoticism it promoted, and is cleverly juxtaposed with Santu Mofokeng’s poignant Black Photo Album/Look at Me,1890–1950 (1997). Mofokeng’s work comprises a slide show of collected portraits of the urban, black middle-and-working-class. “These are images that urban black families commissioned, requested or tacitly sanctioned…” explained Mofokeng in the accompanying catalogue, “How we see these images is determined by the subjects themselves, for they have made them their own.” The work explores a moment in history that was actively ignored during apartheid. Mofokeng uncovers this missing history, helping to assert the agency of the people within the portraits, in a stark contrast to the colonial ethnographic-style documentation of black South Africans.

The influences different people and cultures inevitably leave on each other was another interesting insight offered by the exhibition. It’s common knowledge that famous canonical artists like Picasso were heavily influenced by African masks (even if these were problematically contained in cabinets of curiousity). Less widely explored is the influence of European settlers on South African culture and artists. For example, the shapes of certain spears and axes (titled Venda or Tsonga, 1800–99) are speculated to be an influence of the European bayonet, and images are shown of rock art depicting Dutch trading ships. While many people would like to view history along clearly defined delineations, the reality is a far messier crossover of cultural influences. Each arrival of new peoples to South Africa brought with it new influences – the Khoekhoe, the Dutch, the British, the slaves… There is no South African (or European) art pure of influence. 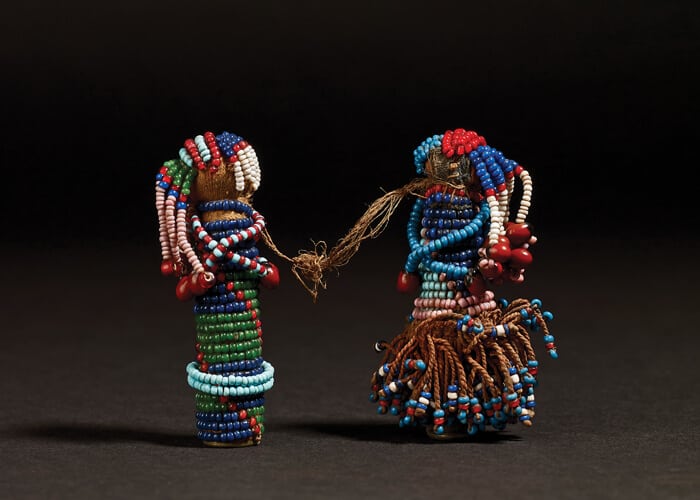 Of course, you can’t have an exhibition on South African art without exploring the bold, influential and outspoken anti-apartheid movement. Scattered throughout the exhibition are works by artists like Willem Boshoff, Gerard Sekoto, Helen Sebidi and William Kentridge. Angry, urgent, darkly satirical and unapologetic, Gavin Jantjies’ A South African Colouring Book (1974) is the perfect feature for the exhibitions anti-apartheid focus. Taking up a large part of this section of the exhibition, Jantjies’ 1974 work uses his passbook as the basis for a series of collaged prints that drive home the absurd inhumanity of apartheid. Each print becomes a page from a nightmarish children’s colouring book, where race and colour are foregrounded through the juxtaposition of apartheid legislation text with images by legendary photojournalist Ernest Cole. Made while the artist was in exile in Hamburg, Jantjies’ work encapsulates the deeply felt frustration of the time.

As the exhibition clearly shows, South Africa as a country has been through a lot, and is still dealing with the complexities of its past. Yet at the risk of sounding sentimentally patriotic, it is also a country that continues to try to address its problems – sometimes succeeding, sometimes failing, but always trying. This mentality is encapsulated in the beaded doll assemblage from the Siyazama collective. ‘Siyazama’ is a Zulu term translated to ‘We are trying.’ Their collective aim was to educate and raise awareness on the AIDS crisis. South Africa might have one of the highest percentages of HIV infections in the world, but that doesn’t stop artists from creatively tackling the problem. Whether it’s drawing attention to the absurdity of apartheid through Jantjies’ barbed satire or Ndebele women painting their homesteads in bright and vibrant patterns as a statement of their refusal to be culturally silenced, South African artists continue to use art to make their voices heard.

In a time of protest and unrest around fees and access to tertiary education, it’s imperative that we remember how effectively art has been used by the country to address similar issues, and ensure that it remains a loud political voice. When asked what his hopes are for the exhibition’s international audience, curator Chris Spring says,“with the help of South Africa’s extraordinary artists, past and present, we hope that viewers will come away with a much deeper understanding of the wonderful – though at times extremely painful – human story which unfolds throughout the exhibition.” Whether you visit the exhibition in person or explore it through the catalogue you will undoubtedly discover something new, not only about South Africa’s history, but that of humanity’s creative past.

Siobhan Keam is a freelance art writer based in London.

‘South Africa: the art of a nation’ is on show at the British Museum, London from 27 October 2016 – 26 February 2017. It is sponsored by Jack and Betsy Ryan. The logistics partner is IAG Cargo. The catalogue is published by Thames & Hudson in collaboration with the British Museum, and distributed in South Africa by Peter Hyde & Associates.