Spotlight on the Art of Darkness

in AFRICAN ART, CONTEMPORARY ART, CULTURE, CURATED, EXHIBITION, MIXED MEDIA, STUDIO, VISUAL CULTURE
Share on facebook
Share on twitter
Share on email
Share on whatsapp
The artworld is directing its eyes to the once called ‘dark continent’ with promises of inclusion. In Kinshasa – The Democratic Republic of Congo – the Kin ArtStudio is showing resistance to fierce attempts of appropriation while claiming its contemporaneity and global relevance. 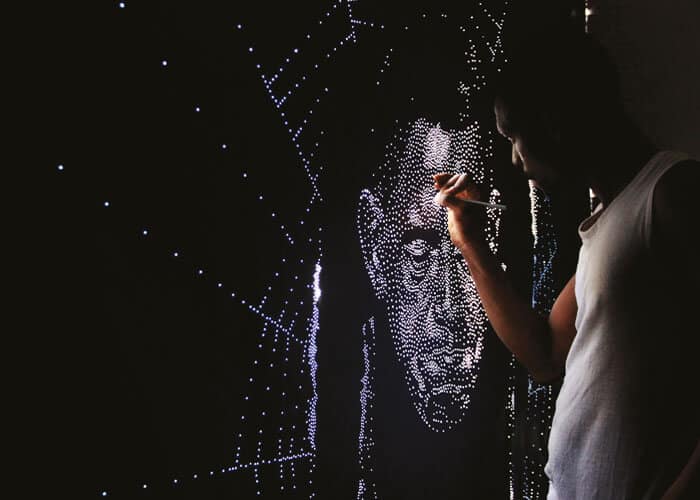 Calling for the reorientation of that spotlight, the Kin ArtStudio has given itself the mission to shed light on Congolese contemporary practice in the field of visual arts. More than an open space that comprises a couple of working studios, an office and a resident studio, the structure, created in 2011 by the artist Vitshois Mwilambwe Bondo, firmly stands for its values. Adopting a long-term accompanying strategy, the studio has been working with young artists, enabling their creative expressions and supporting their artistic development through access to documentation, dialogue about their work, exhibitions, workshops, residency opportunities, and networking. 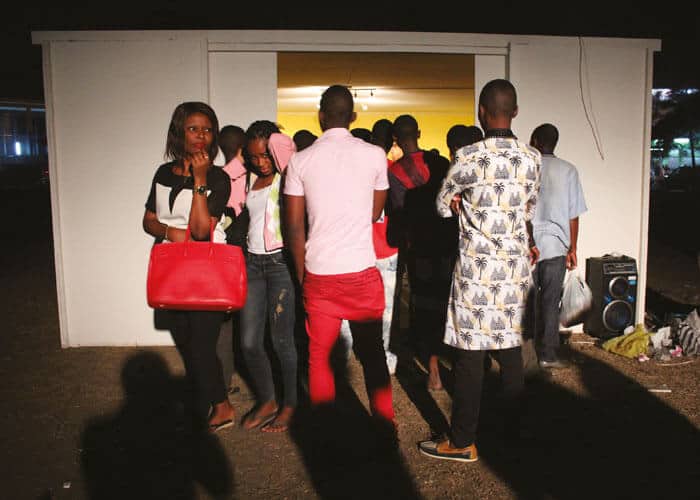 The cooperation and development sector has considerably taken over the ask to promote and diffuse local productions. But sincerely, who does wish to rely or depend on some far-away countries’ political agendas, whose interests lie more in Congo’ minerals than in its golden talents? It is a fact that the country is being exploited and excavated from bottom up. Let Congo’s visual art scene not be as factual. Nkembo Moswala’s series of light installations System (2016) evokes the country’s curse at the disposal of a global system that is now turning its attention to the country’s art. The Kin Artstudio pleads for an autonomous position from which the young generation of Congolese artists hold the tools and resources of its own representation.

If so-called ‘contemporary African art’ endorses the global marker through rallying the biennalisation turn and the commodification of art through international fairs, it needs to be self- inquisitive. Hence, the appreciation of the ‘local’ should be preceded by a thorough understanding of the context in which visual art creations emerge and an engagement for their local integration. 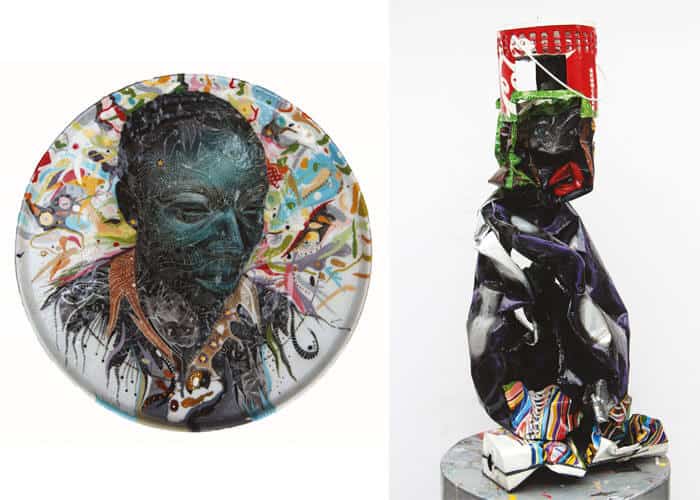 In this effort, the Kin ArtStudio has come up with the ‘Mobile Art Gallery’ project that is now in its third edition. For most Kinshasa inhabitants, ‘art’ or ‘artist’ rhyme(s) with music and ndombolo – urban popular dance expression or style – unaware of visual art practices. This project responds to a cultural imperative: art’s dialogue with a broader public. The format – a structure in parts that can be easily set up and dismantled anywhere throughout the city, allows a large reaching scope. Touring the city in search of young promising artists, the Kin ArtStudio gives them the opportunity to showcase their work in the Mobile Art Gallery. Not familiar with art galleries’ codes, the audience nonetheless interacts with the artworks, transcending the varnish and exclusive nature of art exhibitions. In the third largest metropolis on the continent, a ‘do-it yourself ’ mentality imposes itself. ‘The Art of Darkness’ bears the abnegation, ingenuity and fantasy that characterize Kinshasa’s urban environment. A common trait among the four artists who closely work with the structure is their dedication, accurate technique, multidisciplinary approach and material inventiveness. Nkembo Moswala, Aristote Mago, Serge Diakota and Fransix Tenda are just a sample of the bourgeoning and buoyant energy that emanates from a creative hub that is still fighting to make its way through an arbitrarily designed art map. It is the quality of their work, integrity in their approach and their ability to navigate that map that will insure recognition and durable positioning.
Aristote Mago’s work recycles what is commonly called ‘market bags,’ laying wool or synthetic thread and sticking particles of the same bags to obtain corporeal shapes. Serge Diakota has developed a technique that combines photography, printing, scratching, and painting, graphically exploring different kinds of supports (such as plates or bottles’ caps), which lead to rich and colorful compositions. Fransix Tenda produces uneven sculptures, hammering metal containers and assembling metal waste objects on which he then paints. Finally, Nkembo Moswala sets up installations, appealing to light in order to reveal the complex process of tiny holes drilling on large scale tarpaulin.
Mentored by Vitshois Mwilambwe Bondo, they will all present their latest realisations in the exhibition ‘Young Congo, a Common Spirit’ that will hopefully take place in Kinshasa before traveling on the continent and further afield in 2017. It is an opportunity to showcase young Congolese artists who have been exploring and redefining their practice regarding the challenges that they collectively face. 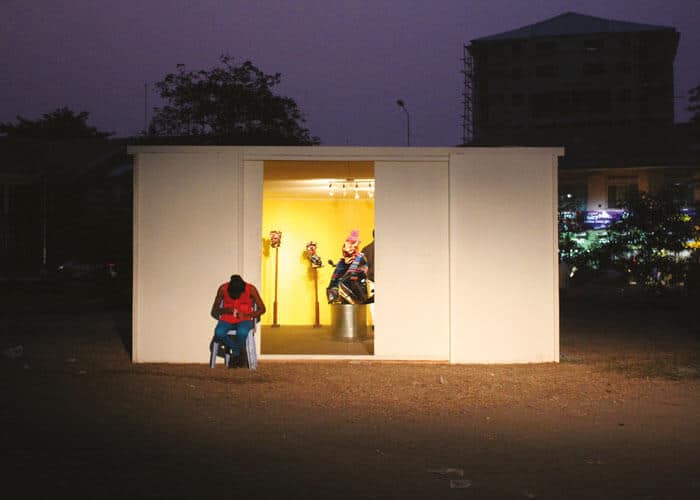 In the absence of a local sustainable market and any regulative institution or agent for the circulation and commodification of visual art, the Kin ArtStudio raises awareness about these issues among its affiliated artists and assumes an active role in identifying worthwhile opportunities (residencies, art manifestations, and awards) that help Kinshasa-based artists’ visibility and artistic growth. Emerging artists are subjected to a socioeconomic logic that gives authority to acquirers or curators. It is precisely to subdue this reality that agency needs to be regained. The studio’s efforts seek to guide a young generation of visual artists on a distorted map, avoiding the economic traps surrounding their creativity, talent and artistic integrity, or foolishly trying to align with the ‘contemporary African art’ market’s increasing rates.
In spite of itself the Kin ArtStudio takes the various roles of an art studio, a curatorial platform, a non-formal training center, an exhibition space and an art manager. This multifunctional attribute is as necessary as it is challenging. Kinshasa is a context in defiance, where the many pretending cultural actors want to get a hold on the manifold genuine art expressions that spur from the city. The Kin ArtStudio insists on Congolese contemporary visual art’s pride and self- assertion, creative art expressions that emanate and are accredited by their producers. 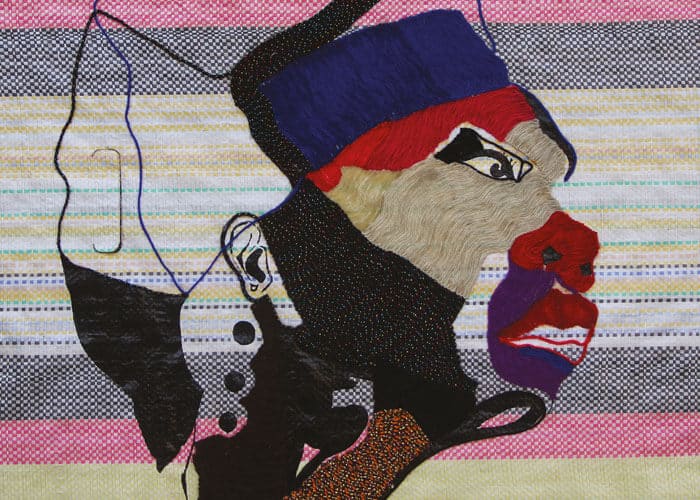 The Art of Darkness does not shine like a diamond. Viscerally dark, vividly radiating, fighting for empowerment and independency, its fruitful prospects depend on the preservation and union of its resources. It shall open its grounds for enhancing collaborations, the kind that value creativity over mere diversification.
Jean-Sylvain Tshilumba Mukendi is currently taking part in the ‘Geopolitics and the Arts of Africa’ research programme (NRF) at Rhodes University, South Africa. Involved with the Kin ArtStudio, his research focuses on the relevance of ‘globalism’ in the contemporary art world and the establishment of independent art structures in sub-saharan Africa.