Aspire Art Auctions is building up to its latest sale of exciting, high quality fine art on its upcoming auction in Johannesburg, at the Gordon Institute of Business Science in Illovo. A significant double-header of top lots leads the sale, indicating the range of museum-quality work from different periods at its auctions – a trait for which Aspire is becoming well-known. 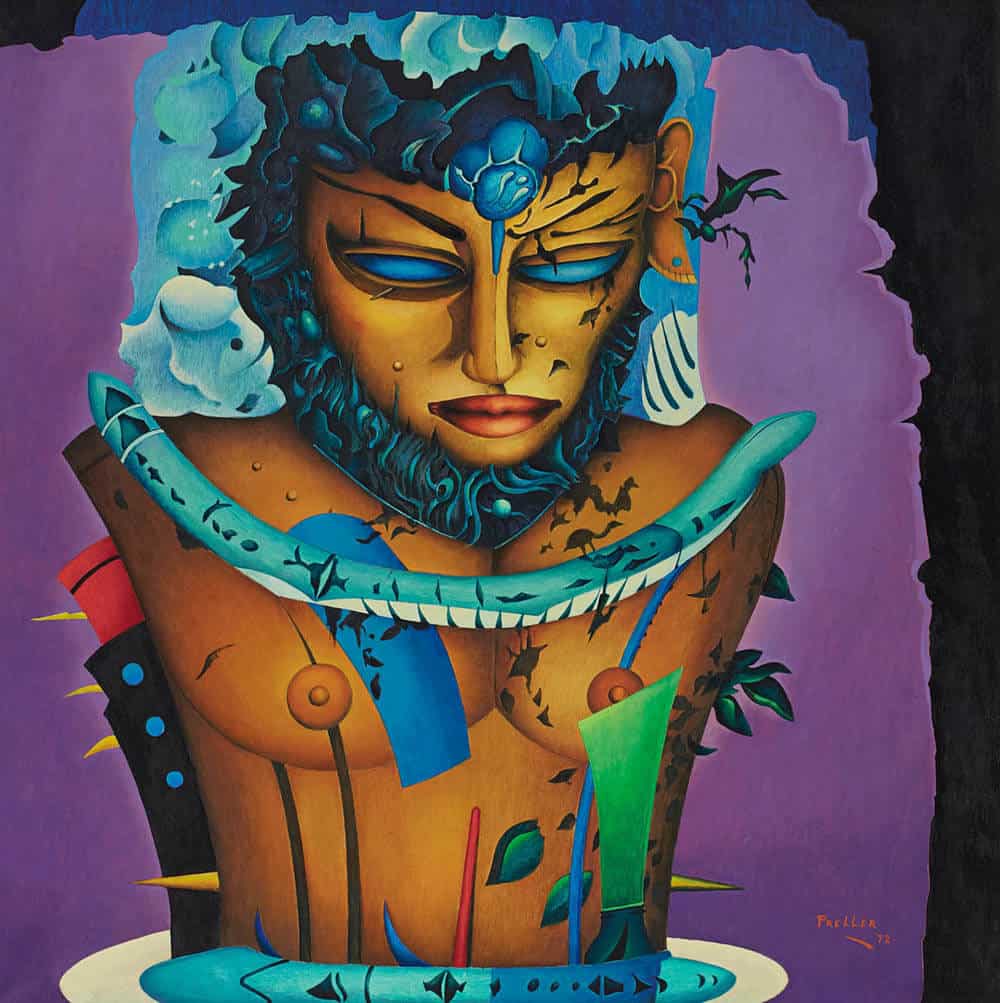 Given both William Kentridge’s international prominence, in the wake of his acclaimed performance production The Head & The Load at Tate Modern’s Turbine Hall in July, and his current blockbuster show at Goodman Gallery in Johannesburg, Kaboom!, collectors will be attracted to a remarkable drawing on sale by the artist. Drawing from Stereoscope (Double page, Soho in two rooms) (1999) is one of the artist’s most important and historically significant works, and one of the largest drawings from the film Stereoscope, in the famous Drawings for Projection film series. Both film and drawing have been exhibited widely at major international museums and institutions. 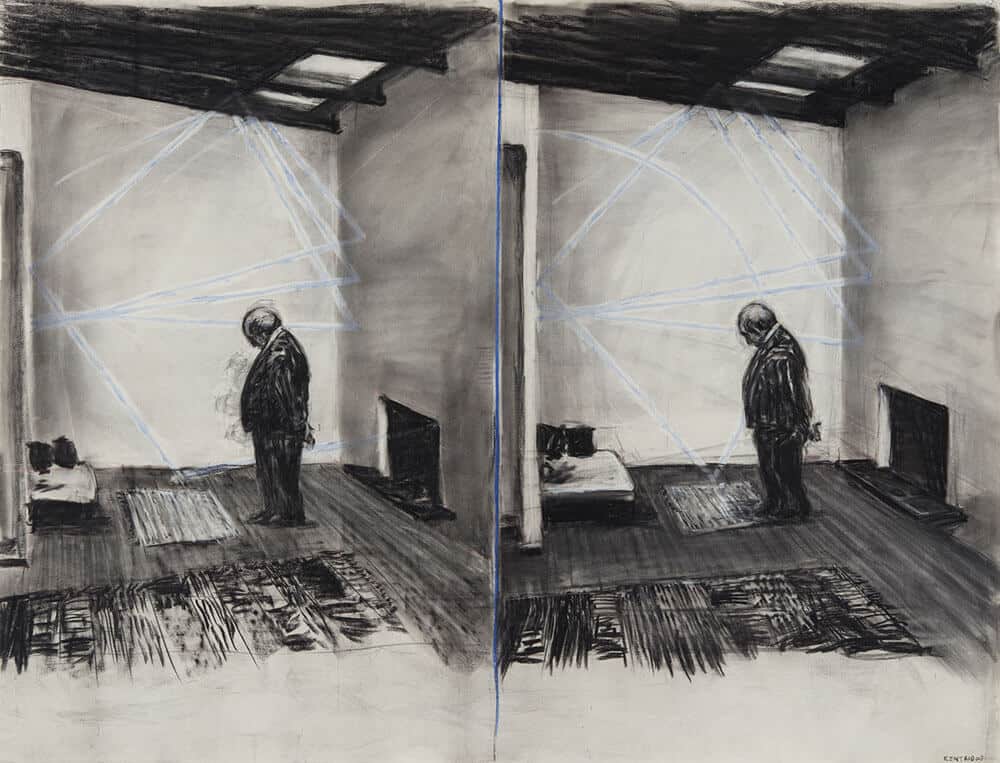 The Kentridge work takes pride of place alongside a painting by South Africa’s most respected and collectable modernist artist, Alexis Preller. Titled Adam, from 1972, this tantalising painting is one of a group of important later paintings depicting Adamic or Apollonian figures, and the one which Preller himself selected, of only five works chosen to represent him at the São Paulo Biennale of 1973. The fact that Aspire brings such market-leading examples of the work of two widely disparate but highly respected artists to auction, indicates the positive position the auction house has carved out for itself. 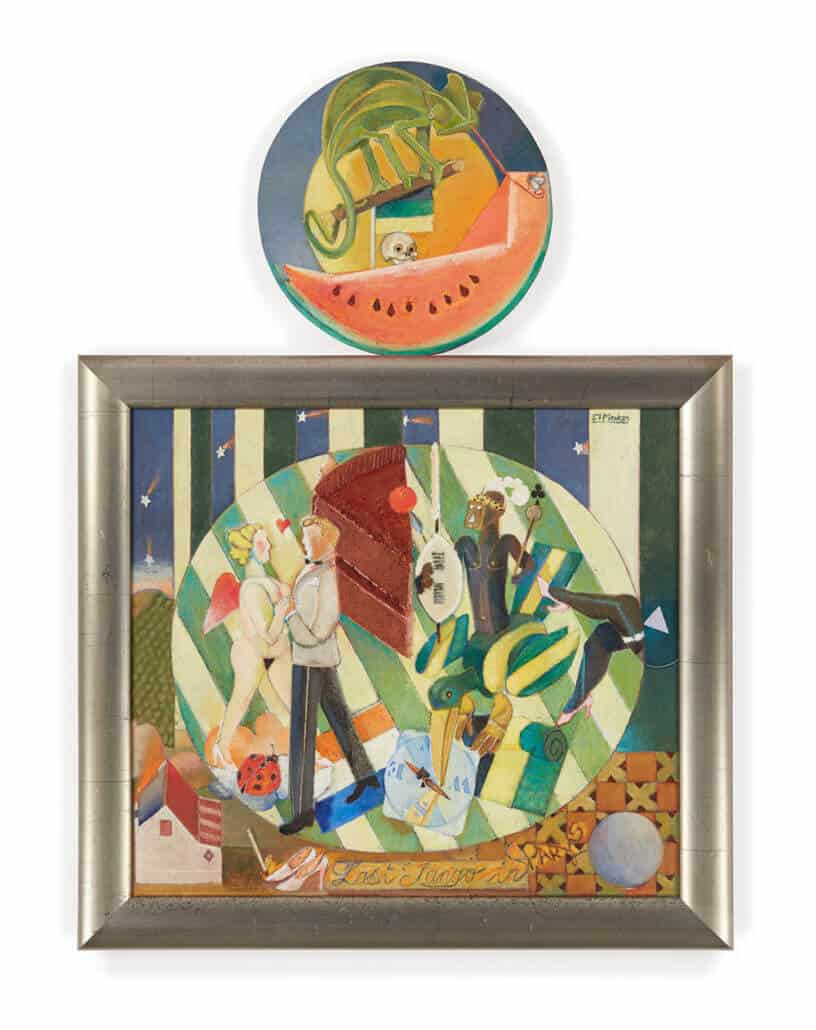 Among the other auction highlights is a standout piece by much-loved Cape Town artist Stanley Pinker.  His painting The Last Waltz exhibits a characteristic sense of formal experimentation in the superimposition of a tondo above the conventional rectangular frame of the painting. In keeping with Pinker’s interest in bringing together elements of Cubism with more localised subject matter, both surfaces depict a miscellany of South African objects and characters in the whimsical dance of the title. 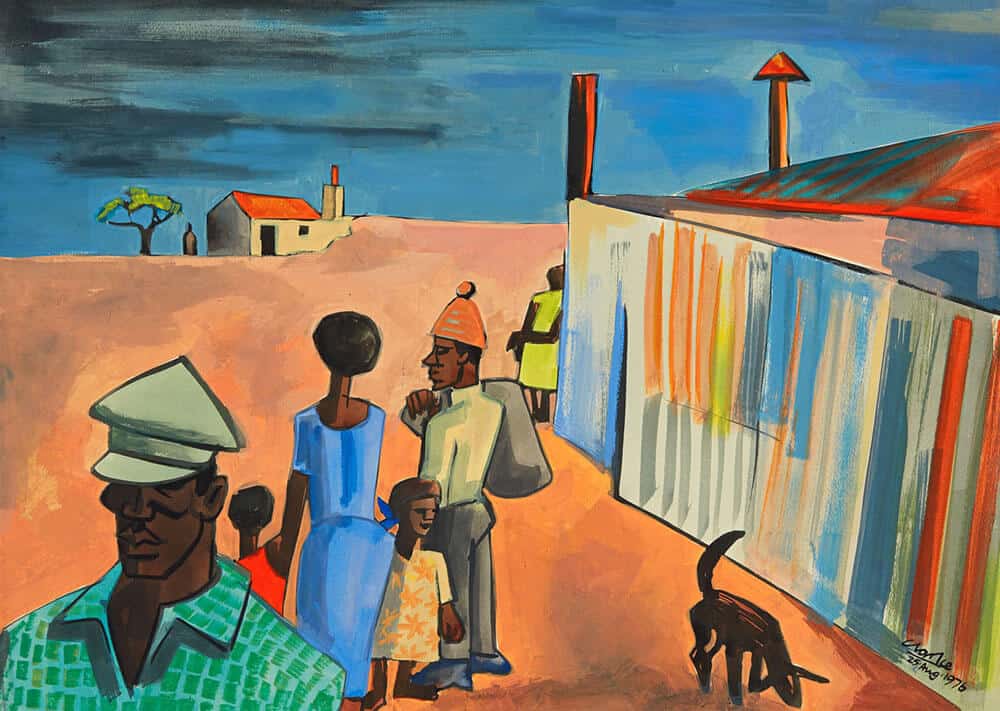 Two electrifying works on paper by Cape Town’s Peter Clarke embellish the already significant modern art offering. Aspire holds the world auction record for Clarke, and will look to maintain their track record with these two early protest works, Their shadow hangs over us from 1974 and Dinge kannie so aangaan nie from 1976. Staying with the modern art period, a selection of beautifully representative abstract works from the mid-twentieth century are on offer. These include a mixed media relief work by Kenneth Bakker and a trio of works from the late 1950s through to the 1970s by British-born Douglas Portway, one of which was exhibited at the prestigious Drian Galleries in London in 1959. 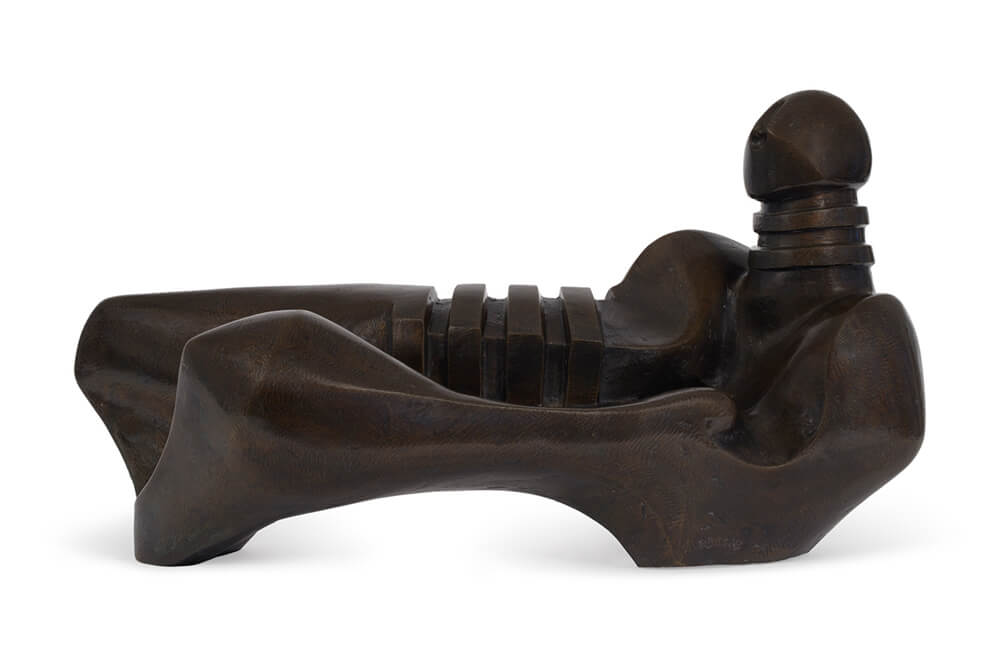 Aspire also has a growing reputation as the go-to auctioneers for important sculpture. Previous highlights include a world record of almost R2m for a work by Sydney Kumalo, as well as world records for  Edoardo Villa and contemporary artists Angus Taylor and Willem Boshoff. On this sale, the sculpture on offer ranges from four works by coveted sculptor Villa, to work by previously under-represented 20th century black artists Lucas Sithole, Ezrom Legae and another accomplished piece by Kumalo. 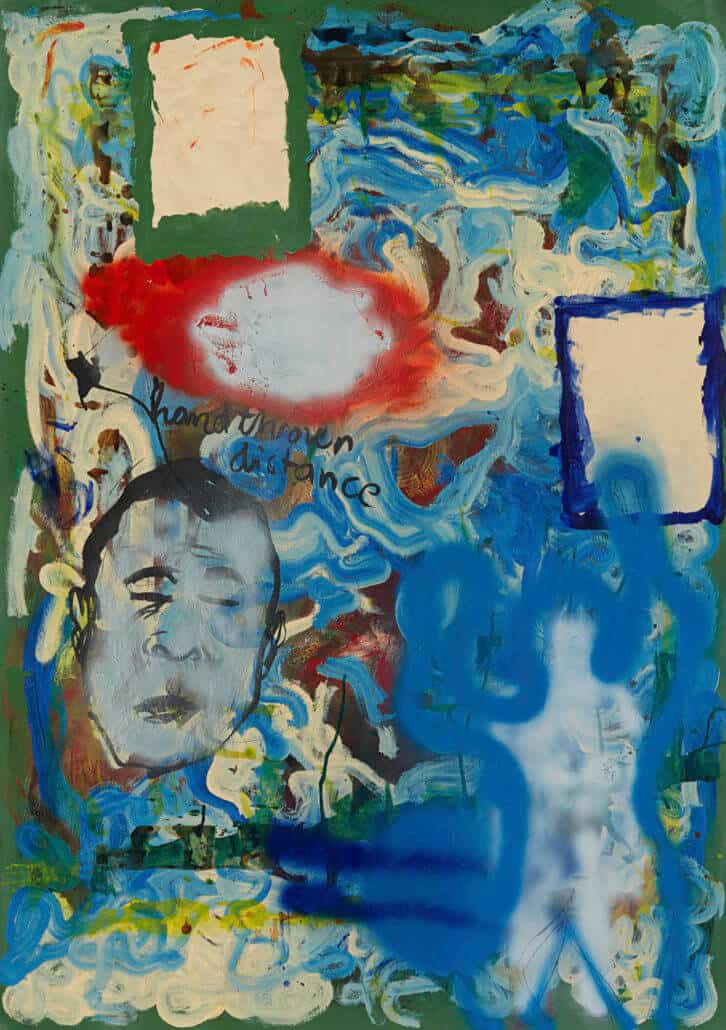 The auction has a characteristically special focus on contemporary art, an area in which Aspire has established itself as a market leader. This segment of the auction market in South Africa has grown 25% year on year, and Aspire has set a series of records in the past two years alone. These include a very important museum-quality work by Dumile Feni, Children under apartheid (1987), which had been repatriated from New York and sold in July last year for a world-record R1,200,320, as well as a work by respected contemporary artist Moshekwa Langa, who saw his Mmatšie I sell for a South African record of R311,920 at the same auction. Langa’s mixed-media work hand thrown distance (2000) features on this auction, alongside an exquisite early painting by contemporary doyenne Penny Siopis, Tapers (1982). Other contemporary work includes paintings by Wayne Barker, Simon Stone, Kate Gottgens and Clive van den Berg, as well as an outstanding still life from one of the rising stars of a younger generation of painters, I Love You all the Time, by Georgina Gratrix.  The contemporary painting roll-call also includes an impressive collection of five works on offer by South Africa’s ‘painter’s painter’, Robert Hodgins, as well as two large-scale landscape commissioned paintings by the photo-realist, Keith Alexander. The contemporary segment further includes significant photographic works by Mohau Modisakeng, Jo Ractliffe and Pieter Hugo, and a sculpture by former Standard Bank Young Artist Award winner Michael MacGarry. 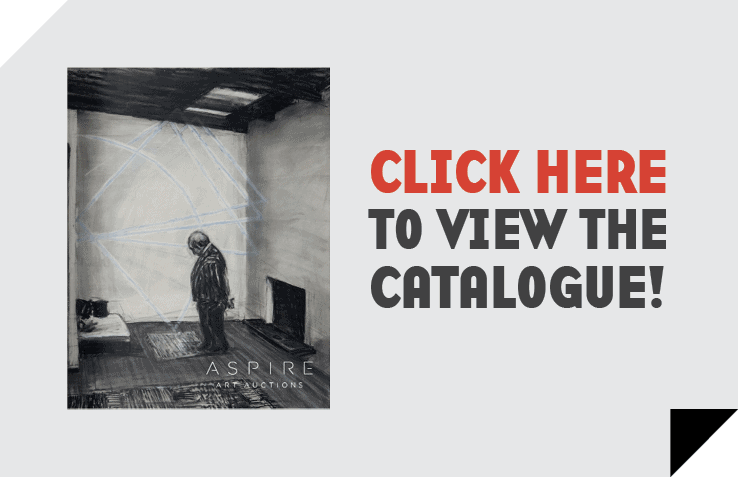 In keeping with its commitment to sustainability and industry development, Aspire will apply its Artist’s Resale Rights (ARR) initiative.  In its willingness to help grow and develop the African art market, Aspire Art Auctions is the first, and to date only, South African auction house to pay living South African artists royalties on the resale of their works of art. The initiative is undertaken entirely at Aspire’s cost, and demonstrates its commitment to the growth of the African art market. Aspire’s work on its ARR project, has to date earned over R400,000 for more than 90 artists, and was recently acknowledged with the award for Best Strategic Project of 2018 at the coveted Business Arts South Africa annual awards.

For gratis and obligation-free valuations, and to consign works of art to upcoming auctions, please contact: