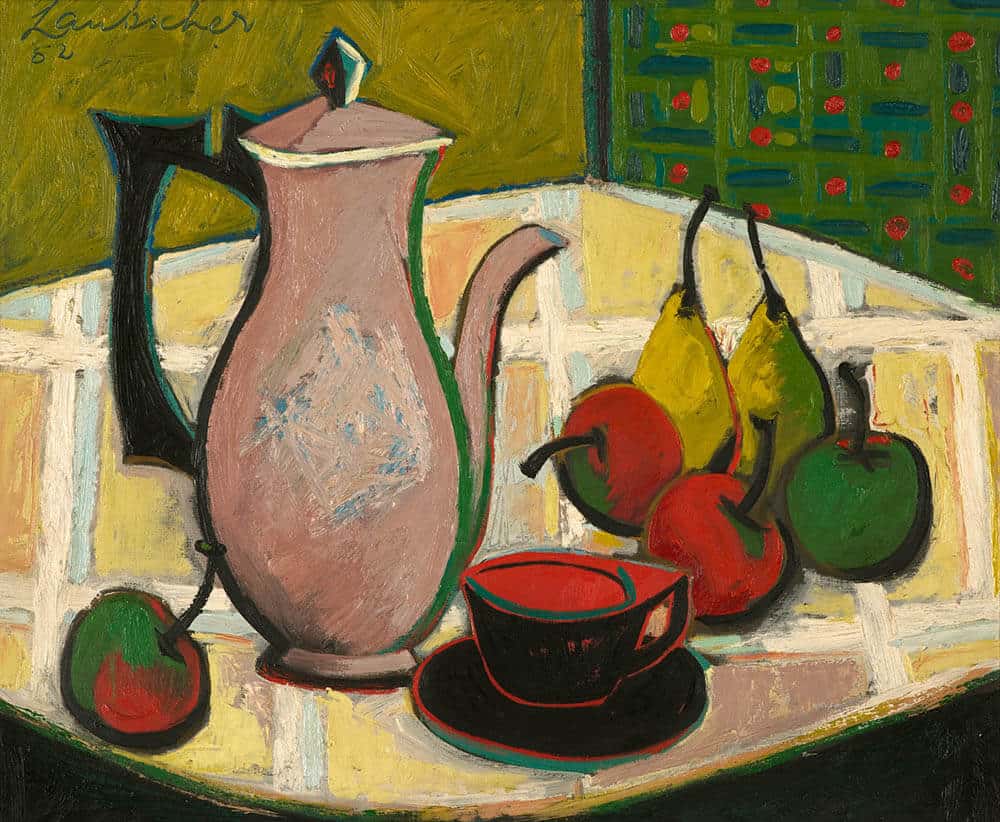 “Erik Laubscher is asserting himself as a force to be reckoned with,” said Strauss & Co’s chairman Frank Kilbourn. “We sold three works spanning a period of 46 years, from a sought after School of Paris still life from 1952 to a magnificent Winter Afternoon, Overberg landscape from 1998.  Two of the three works sold for way above their top estimates, which is an indication of the robust appetite for Laubscher, a quintessential Cape artist.” 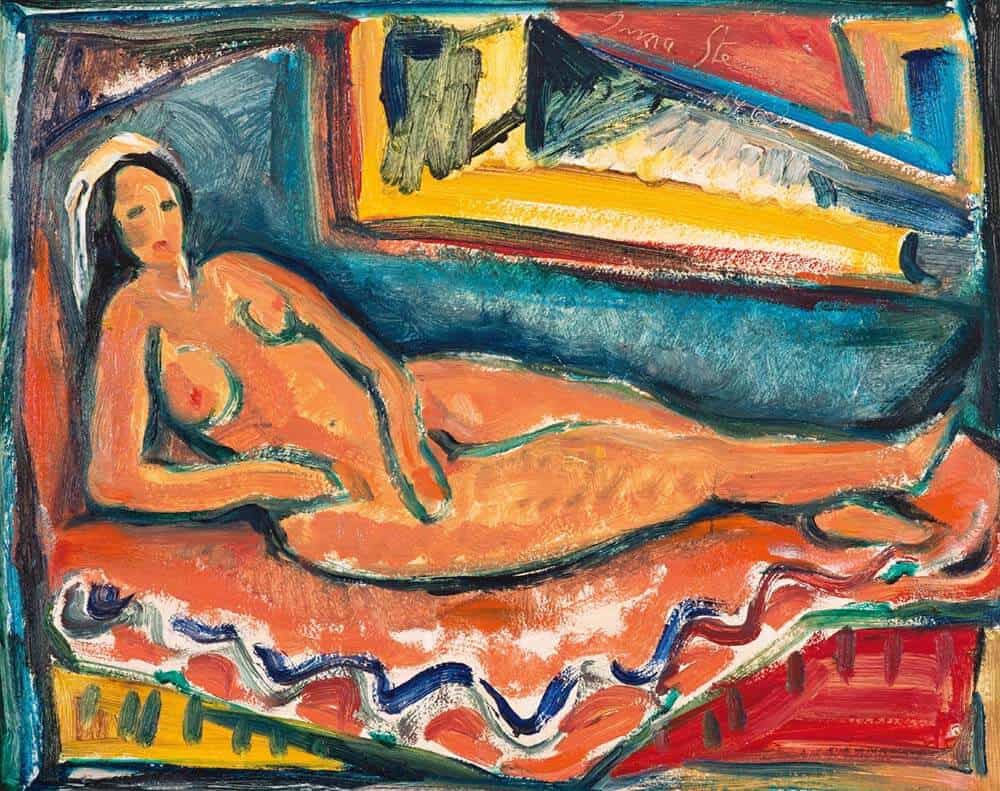 A late-career Reclining Nude by Irma Stern from 1962 was the first work to surpass the million rand mark, selling for R1.136 million. Other important works sold in the evening sale included Gerard Sekoto’s The Donkey Water Carrier (circa 1939), from the artist’s formative Sophiatown period which sold for R1.079 million, and Alexis Preller’s The Herald (1955), an intriguing collage of Egyptian and Beninese motifs laid down on a panel which fetched R1.023 million.

Another Cape artist to perform well was Peter Clarke, whose gouache, Tree, Eroded Bank and Birds, Teslaarsdal (1959), sold for R909 440. The headline result is consistent with the uptick in value of Clarke’s work registered in 2017. 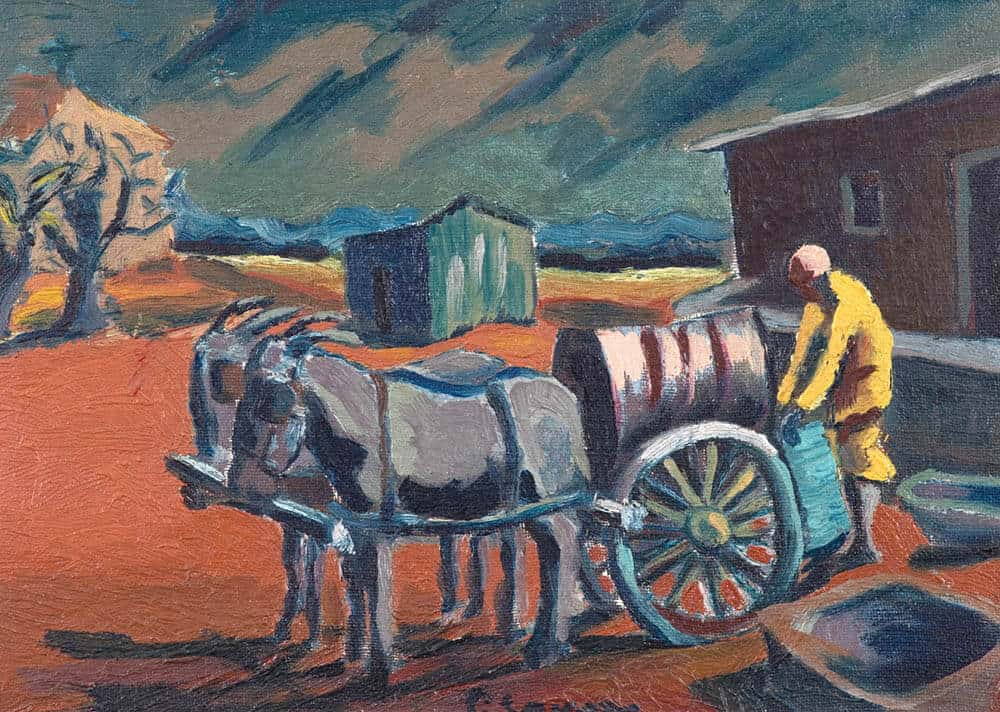 Said Frank Kilbourn: “Following on last year’s exceptional performance, the R37.7 million we achieved on our current sale is a solid result. With the R13.5 million generated at our exciting contemporary auction two weeks ago, Strauss & Co has sold over R51 million this year. This is a very satisfactory result given the uncertain economic and social climate.” 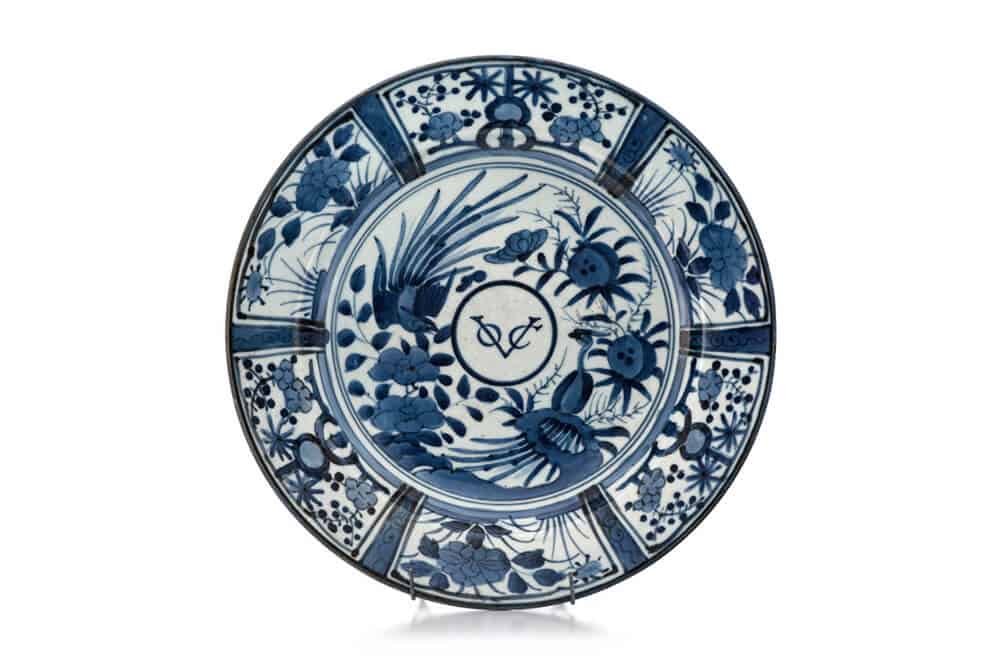 Strauss & Co’s sale at the Vineyard Hotel began with two sessions devoted to the decorative arts, a broad category of work that includes jewellery, silverware, glassware, furniture and objects of vertue.

The sale commenced with enthusiastic bidding for 20 lots composed of Georgian and Victorian gold rings from the Estate of the Late Vyvyan Myerson, one of South Africa’s top valuers and a noted collector. A Georgian rock crystal, black enamel and gold Memento Mori ring from 1739 sold for R62 524, more than double its high estimate. Nineteen of the twenty lots offered sold, a superlative result.

Quality jewellery proved its worth throughout, with pieces from the 1970s also proving especially popular. A lady’s gold, diamond and sapphire Piaget wristwatch sold for R88 670.

The top selling jewellery pieces were a 19th century diamond necklace, tiara and aigrette designed by Falize, Paris, which sold for R227 360, and gold necklace with three rows of rope-twist link chains designed by artist Salvador Dali for Piaget in 1966, which fetched R193 256.

The best performing lot in the decorative arts was a Japanese blue and white VOC Arita dish which sold for R511 560, doubling the high estimate. A 19th century mahogany breakfront bookcase achieved a surprise R272 832, a ten-fold improvement over the high estimate.

“Everything to do with the library, including a set of mahogany and leather metamorphic library steps, a George III mahogany cabinet bookcase and complementary mahogany partners’ desk performed well,” said Vanessa Phillips, Strauss & Co’s joint managing director and a specialist in furniture, decorative arts and jewellery.

There was notable interest in a Chinese jade carving depicting a recumbent mythical beast surmounted by a hawk. The jade carving, drawn from one of two collections offered for sale, eventually sold for R193 256, nearly ten times its high estimate.

“Single-owner collections, like the 28 lots of wonderful jade carvings and 30 lots of 19th  and 20th century snuff bottles, always attract considerable interest, both locally and from buyers abroad. It was a white-glove sale for both the jade pieces and snuff bottles,” said Phillips.

Four telephone bidders vied for Lewis’s charming Jazz Age beach scene, On the Beach (1924), which sold for R125 048, five times its estimate. The cult Cape expressionist Gladys Mgudlandlu registered a pleasing result when her vivid gouache on paper, Cattle (1970), sold for R181 888, a two-fold improvement over the high estimate.

The late-summer sale achieved R37.7 million in sales with a value sell-through rate of 80% for painting and sculpture.

From Laubser to Lewis: Strauss & Co sale explores the historical context to the ‘Art Figure’ in art