in News Articles 2013
Share on facebook
Share on twitter
Share on email
Share on whatsapp
The Studio Museum in Harlem announced on 6 July 2015 that it will be constructing a new home on Manhattan’s West 125th Street, replacing its current facility with a structure designed expressly for its programme by Ghanaian-British architect, David Adjaye. 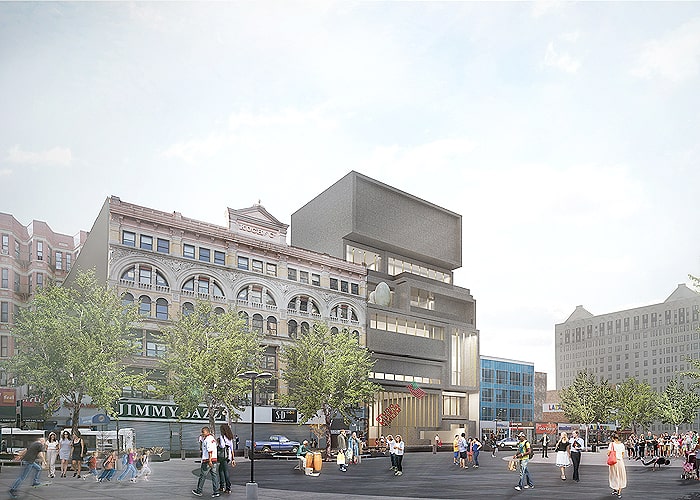 ABOVE: A rendering of David Adjaye’s design for the new Studio Museum in Harlem. Photo: Adjaye Associates, Designer, in collaboration with Cooper, Robertson & Partners, Executive Architect.
The new structure, which marks the 50-year anniversary of the institution dedicated to artists of African descent, will replace the museum’s current building and annex a neighboring lot. Adjaye’s proposed five-story, 71,000-square-foot structure appropriates vernacular architectural features from the neighborhood, and will expand the space for galleries and artists-in-residence by more than 50 percent.
The new building will enable the Studio Museum to better serve its growing and diverse audiences, provide additional educational opportunities to museumgoers from toddlers to seniors, expand its world-renowned exhibitions of art by artists of African descent and influenced and inspired by black culture, and effectively display its singular collection of artwork from the nineteenth century to the present day.
Ticking in at $122 million, the new building will be funded in part by The City of New York, which has so far apportioned $35.3 million to the project. Mayor Bill de Blasio pointed to the vibrant history of the neighborhood that has been home to the museum since 1968; “For generations, artists living and working in Harlem have had an enormous impact on the character and sensibilities of this country. And for the last 50 years The Studio Museum in Harlem has been a pillar for this community, studying, promoting, supporting, and contributing to the cultural fabric of this extraordinary neighborhood and amplifying voices of artists of African descent for an international audience.”
“The City’s investment in the future of this organisation signals our commitment to helping the Studio Museum grow, engaging a wide audience and maintaining New York’s position at the center of American spirit and identity,” De Blasio continued.
With construction expected to be in progress by 2017, the project will add to the celebration of the 50th anniversary of the Studio Museum, which opened in 1968 in a rented loft at Fifth Avenue and 125th Street and has been operating since 1982 in a century-old commercial building renovated for it by the celebrated African-American architect J. Max Bond, Jr.
Thelma Golden, Director and Chief Curator of The Studio Museum in Harlem, stated, “With the help of the brilliant David Adjaye, who is giving us the first facility designed expressly for our needs, we… will bring the creative achievements of our artists, past and present, to audiences from near and far.” 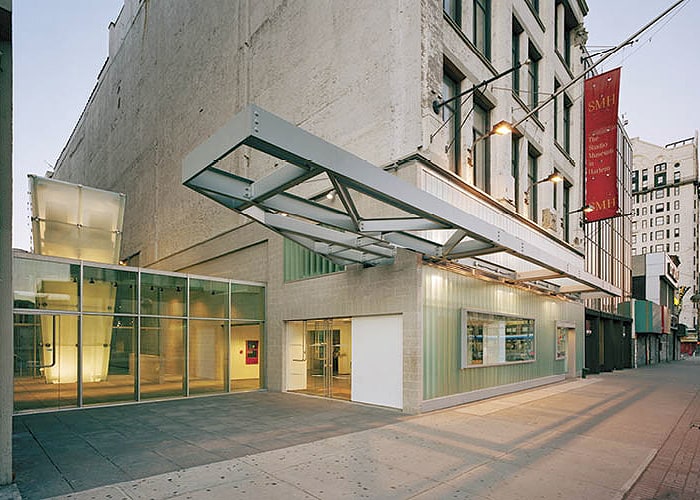 ABOVE: The current facade of Studio Museum Harlem. Photo © Albert Vecerka/Esto. Courtesy of Rogers Marvel Architects.
Taking its architectural cues from the brownstones, churches and bustling sidewalks of Harlem, Adjaye’s conceptual design envisions a dynamic, sculptural facade that contrasts strongly with the surrounding commercial buildings, while being transparent and porous from street level. Designed to function as an exhibition gallery, an archive, a workplace for artists in residence and a “living room” for the Harlem community and its visitors, the new building features a light-filled core that soars upward for four stories; an “inverted stoop” that invites the public into a lively multi-use space for lectures, performances, informal gatherings and more; a terrace overlooking 125th Street; and a variety of graciously proportioned spaces for installing artworks, including pieces that will be visible from outside the building.
“I am so honored to be working on The Studio Museum in Harlem,” said David Adjaye of his involvement in this groundbreaking project; “[It’s] about pushing the museum typology to a new place and thinking about the display and reception of art in innovative ways. It is also about a powerful urban resonance – drawing on the architectural tropes of Harlem and celebrating the history and culture of this extraordinary neighborhood with a building that will be a beacon for a growing local, national and international audience.”
The world-renowned architect also recently worked with Okwui Enwezor, the curator of the 2015 Venice Biennale, to design a museum within the Arsenale and performance area within the Central Pavilion in the Giardini.