A poetic investigation of (unsustainable) privilege, through words, phrases and images. A metaphor of memories that soon will be lost! But what happens when you test metaphor as fact?

A slip of paper on the glass of the entrance door explains that the police had come by the night before the opening, on the assumption that someone had broken in, destroyed the chairs and messed up the space. The note states that what appeared to be a break-in was in fact an art exhibition.

Meanwhile the evening traffic of Müllerstrasse is slowing down. The colourful signs of the shops and fast-food joints become more intense in their multi-facetted, multi-lingual mix of invention and information. The interiors are changing from flat to three-dimensional: cool neon illuminations and various light sources transform the five kilometre stretch of street into a multiplicity of little boxes, filled with light. Wedding – which in Berlin does not mean ‘marriage’ but was registered in 1200 as the name of a mill, was dubbed ‘Red Wedding’ at the end of the nineteenth century when it was home and workplace to Communists, leftists and working-class communities. Residential and industrial buildings still bear witness to this era today, in what is still a very mixed part of Berlin, populated by large numbers of students as well as fourth generation Turkish families. Their fathers or grandfathers were the Gastarbeiter or guest workers invited by the German government to perform the hard labour of the burgeoning economy of 1970s Germany. Today, Wedding is a part of town where gentrification most violently impacts the poorer and middle-class population as well as artists and craftsmen, who for decades have inhabited and enriched it. 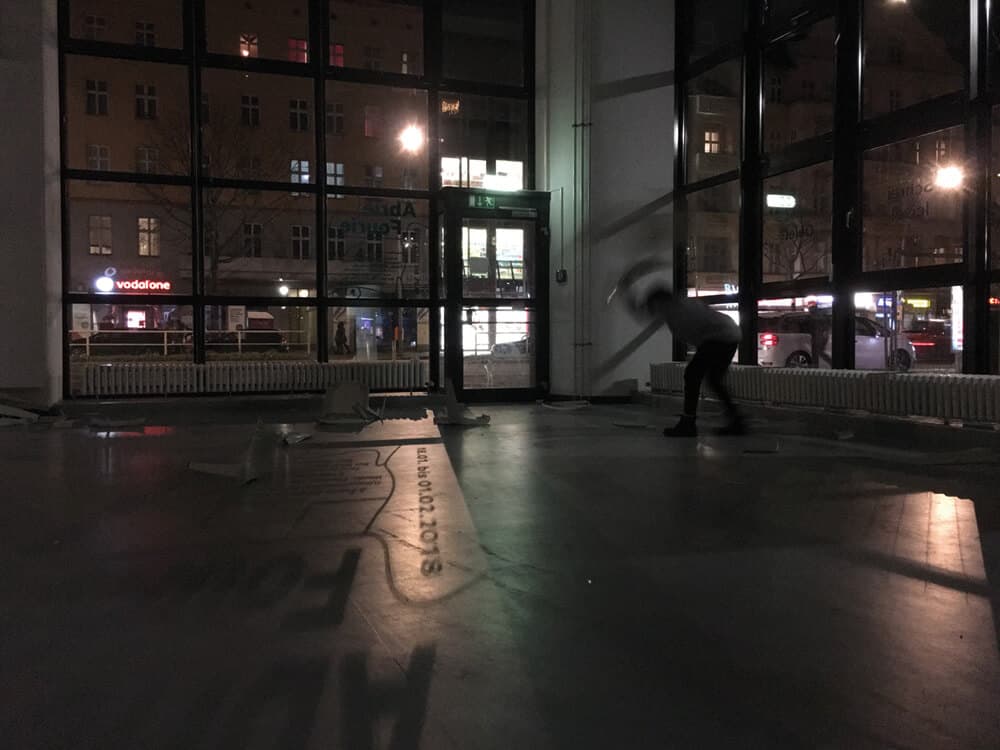 The exhibition space is unlit. The only light comes from a video projector and its projection, which slowly transforms the wall into an elevator. The film is silent and filmed from inside an elevator. It shows a succession of battered walls gliding past, perhaps in an industrial building somewhere in the neighbourhood. Fragments of text, randomly engraved wall drawings, appear and disappear. The movement is neither fast nor slow, but in its modest way transforms the large, high ceilinged gallery space and glass facade into a floating “somewhere”, a space of unknown identity, that is difficult to pinpoint as inside or outside. This feeling of having lost a clear spatial identity is reinforced by the presence and absence of people.

Something happened in the space before we arrived. All that remains of the violent activity that occurred in our absence are the bony skeletons of two iconic plastic Monobloc chairs. They have been demolished, perhaps dropped from a great height, or destroyed in a collision of two chairs or a fight between people armed with white plastic chairs. These universally familiar chairs appear as lost and damaged icons of a promise that everybody gets a cheap seat wherever you go.

These universally familiar chairs appear as lost and damaged icons of a promise that everybody gets a seat wherever you go. 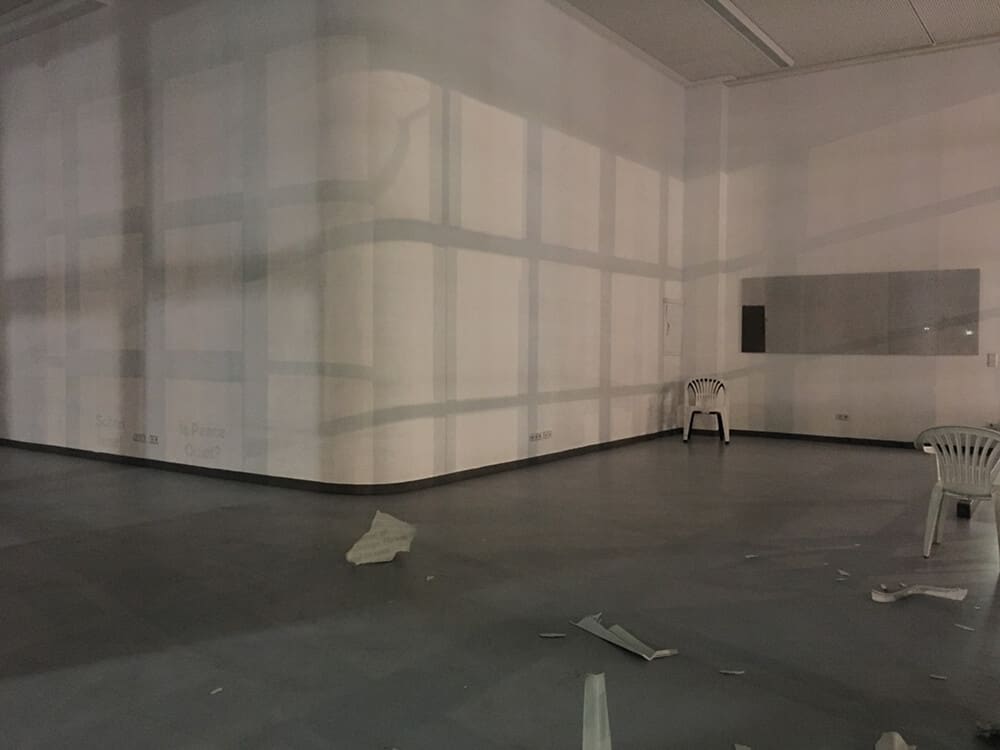 One week after the opening of Fourie’s installation, I travelled to Jerusalem where, at the Western Wall, I noticed a huge group of Monoblocs. Some were stacked, others scattered about and in use by people praying, all of them facing the wall. The twilight at the Western Wall reminded me of the early evening in Wedding and – again – the chair claiming its universality. Ethan Zuckerman (director of Civic Media at MIT) regards the Monobloc as one of the rare design objects that has no context. “A white plastic chair on a photograph adds almost no information to the picture: it’s almost impossible to say where you are or what time it is. It could be Greenland, Africa or Italy.” In some Swiss cities, like Basel, the Monobloc was forbidden – perhaps it was considered too cheap or too suggestive of immigrants. The Monobloc, born in France in 1973, was the first chair to be cast in a single bloc and, like Duralex drinking glasses, is said to be unbreakable. The story of the Monobloc is an interesting one, although it perhaps does not belong here, and leads to France and the Tam Tam stool Brigitte Bardot used as an ashtray in a Paris Match report in 1973.

But the interesting thing is that the Monobloc has for many years played an active role in Fourie’s work, an artist mainly working with photography. In the frequency of its presence it replaces the people who would otherwise be sitting on it, and the chairs themselves become actors. Now they transform the gallery into a stage, where an unknown theatre piece might have been performed, or perhaps, less artificially, they have transformed the gallery-space into an outside place, anywhere on earth, where a fight or a drama has taken place, whose circumstances can only be surmised. This lost and loose scenario depicts a violent and somewhat aggressive atmosphere, which is dissolved in a way by the fluidity of the elevator projection.

The police somehow took the Monobloc battle for granted and instructed the artist to put the note in the window to inform passers-by that the scenario was fictional and not real. The reality is that something did happen and Fourie spent the second half of January 2018 in the gallery space, observing and questioning the peculiar relationship between inside and outside. 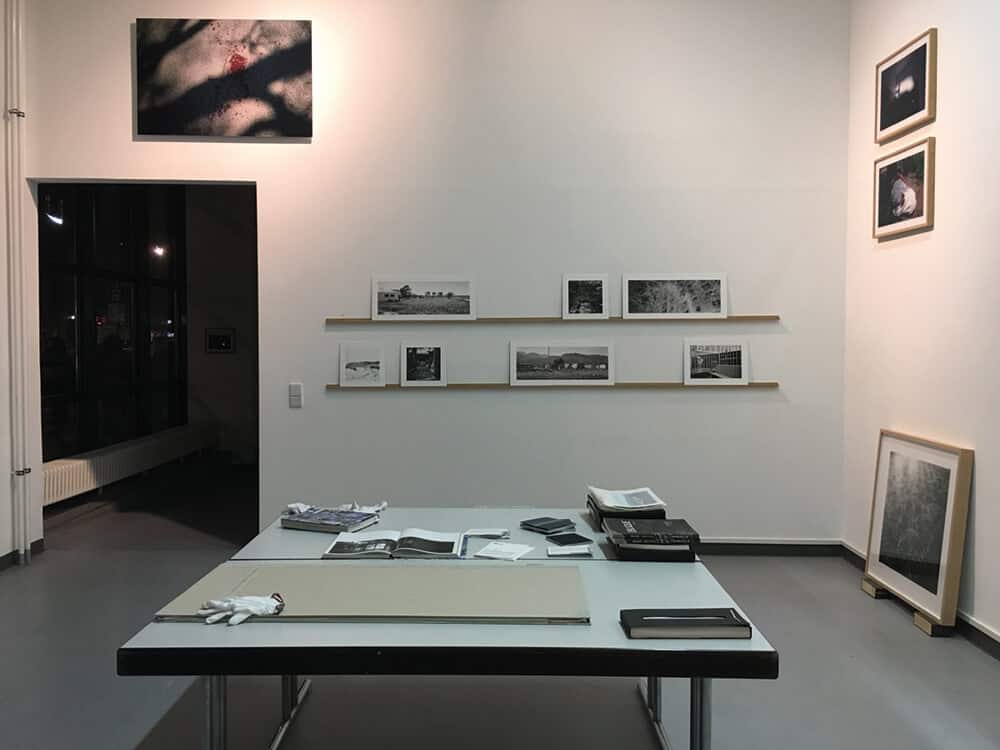 In the second room in the exhibition, which we enter via a few steps, the atmosphere is completely different. The small, crowded space is well lit and resembles the backstage of a gallery or an art fair booth. In the middle of the space a number of large portfolios lie open on a table and can be looked at with the help of an assistant in white gloves. She turns over Fourie’s photographic prints one by one, portfolios from various working series. On the surrounding walls some of the images are shown on small shelves. The density of Fourie’s photographic observations seem to fold time, and in contrast to the more static atmosphere of the first room, we catch moving glimpses of Fourie’s image universe. The Monobloc reappears again and again like an old friend, in different places and states, animated like a fetish. The guests at the opening are standing around the table as if participating in a ceremony, looking at the moving pictures as they surface from beneath the white gloves.

Somehow there seems to be a correspondence between the white gloves and the cavities of their appearance in Fourie’s pictures, and the whiteness of the Monobloc carcasses and their loose presence-absence in the large, dark gallery space. 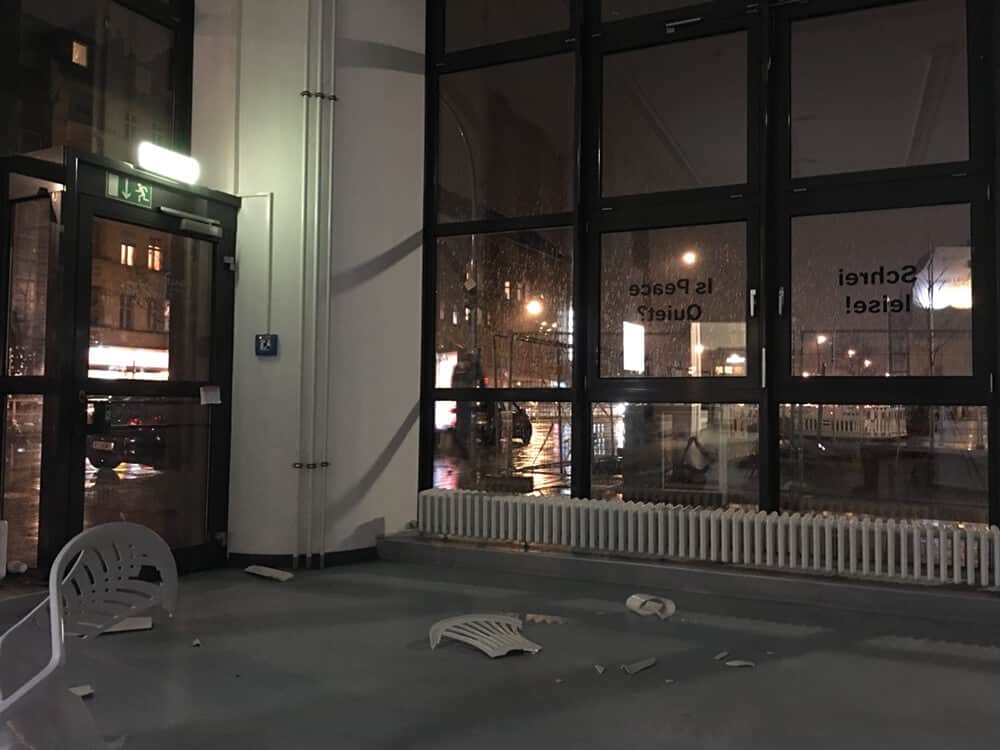 Galerie Wedding, Raum für zeitgenössische Kunst is a Berlin city gallery funded with public money and is under the artistic direction of curators Solveij Helweg Ovesen and Bonaventure Soh Bejeng Ndikung since 2014.

Katharina Hohmann lives and works in Geneva (Switzerland) and Berlin (Germany) as an artist and curator. Since 2007 she has been the head of the sculpture and space department at HEAD-Genève, the Geneva university of art and design. She discovered the work of Abrie Fourie at Galerie Wedding in 2018.