Styles from the Streets 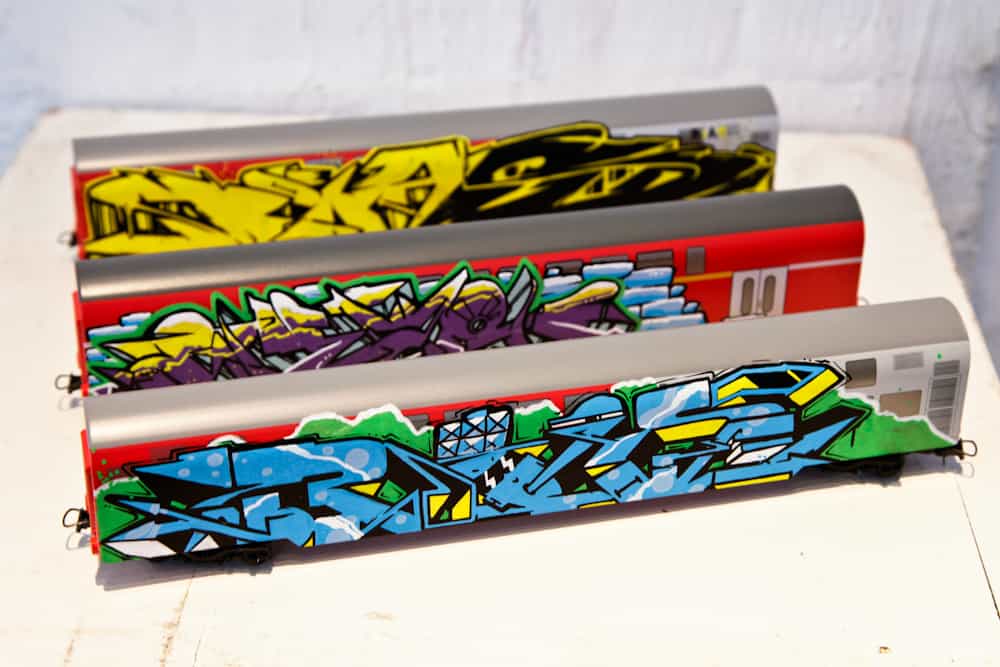 Art South Africa: How did you come up with your pseudonym?

MARS: I was around 15 years old; I drew an alien character, and then spray-painted it on a wall. Seeming as I was doing “graffiti” I thought something was missing, a word, letters, a name possibly. I was with a friend and after a very brief discussion we agreed that the alien should have the word mars next to it, because that’s where aliens come from. I was very naive and didn’t know what I was doing. Not much has changed since that day.
CURIO: I got the name from a Canadian friend; he wasn’t really active anymore but had a dope hand style. We were just tagging random words and he wrote “curio”, it worked really well as a tag, so I jacked the name hahaha.
BIAS: I chose the name Bias as a direct statement about how the general populous views graffiti. Most people only look at the vandalism side, even when they see a seriously colourful piece, they think “vandalism” and how could that have been done at night. I chose my name to change that perspective.
VERONIKA: I had a crush on a girl I met in New York, [and] then came home [and began] painting her name everywhere. I got over the girl, but the name stuck.
TYKE: The relevance of TYKE has changed over the years. I started writing it in about 2002, and it had to do with me being a kid at the time and getting up to mischief.
RIOT510: Every writer will start with a name that is changed 3 or 4 times before he or she sticks with one. Its not often that one will find a name straight of the bat. Mine came to me at time where I was lost in my life. It initially came to me through music, and stuck with me. It helps me remind myself where I came from. Who I was, and who I am today: RIOT510.
PAGE: It was my surname before I got married and my father passed away, so it serves as a perpetual tribute to him as much as a reminder to me of where I came from and my roots.
Shiz GA: It is just a word people used to call me, like a nickname, and it’s close to my real name.
JESTR: I can’t exactly remember how I came onto Jestr, it was just a pseudonym I’d write while I was I school. Then I started getting well-known and thought it wouldn’t be wise to change it, and if a name is what you make of it well then I figured it wasn’t that important what it was.
Forty Forties: It was a process of elimination, finding a selection of letters I thought worked well together. 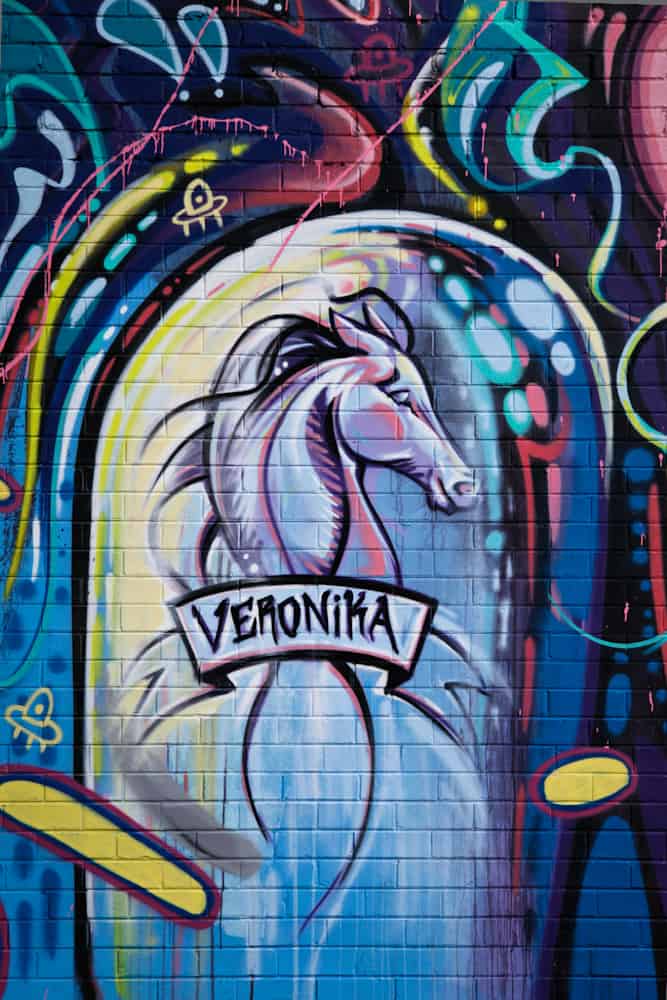 VERONIKA, Styles from the Streets, Graffiti Jam
What role do you think graffiti plays in society? Do you think it can be utilised to bring about positive change?
MARS: It plays huge roles in and on society, as it is a representation of society. It’s normal everyday people expressing themselves on the streets. It’s educated people, and it’s uneducated people, it’s young people, and it’s old people, it’s kids painting, and it’s their grandparents documenting it, it’s all races, all sexes. It’s anyone from any walk of life. There’s a beautiful attraction that happens between the people and the art, almost anyone can appreciate graffiti/street art, they don’t even need to understand it, just the fact that it’s out there, and not in a gallery or in a home, gives it so much power and exuberance. It’s “fuck you”, either take it or leave it, but it cant be ignored.
TYKE: It is a constant reminder to look at something other than billboards; we have a voice and [we] are free to say what [we] need to. We get a bad rep for painting walls; these walls are our cages and should be destroyed. Graffiti saves lives and is about as positive a movement as it gets. If more of us would take the plunge, realize how free we are, and start thinking for ourselves, the world would be a better place in no time.
BIAS: Well, speaking from personal experience and the way my crew operates (own crew), we do large-scale full colour murals with specific community based messages. So far, we have done many that are well accepted by their areas. A positive mindset and some persistence are necessary.
RIOT510: There are always two sides to the story with this question. Over the years, I’ve come to this conclusion: If people actually take the time to notice what we are about, they come to appreciate the art. Thankfully here in Johannesburg, the powers that be are looking at it in a positive way. The society nobody wants to see or think about is out there, and we are the ones out there trying to clean these places up. Giving the unattended kids something to do instead of run to their closest dealer. To be captivated by art, in general, gives the kids plenty of mediums to discover that they could become something more in life. So, in my opinion and from what I see out there on the streets, from the cops’ perspectives, and the peoples’ as well, it’s all positive for society. 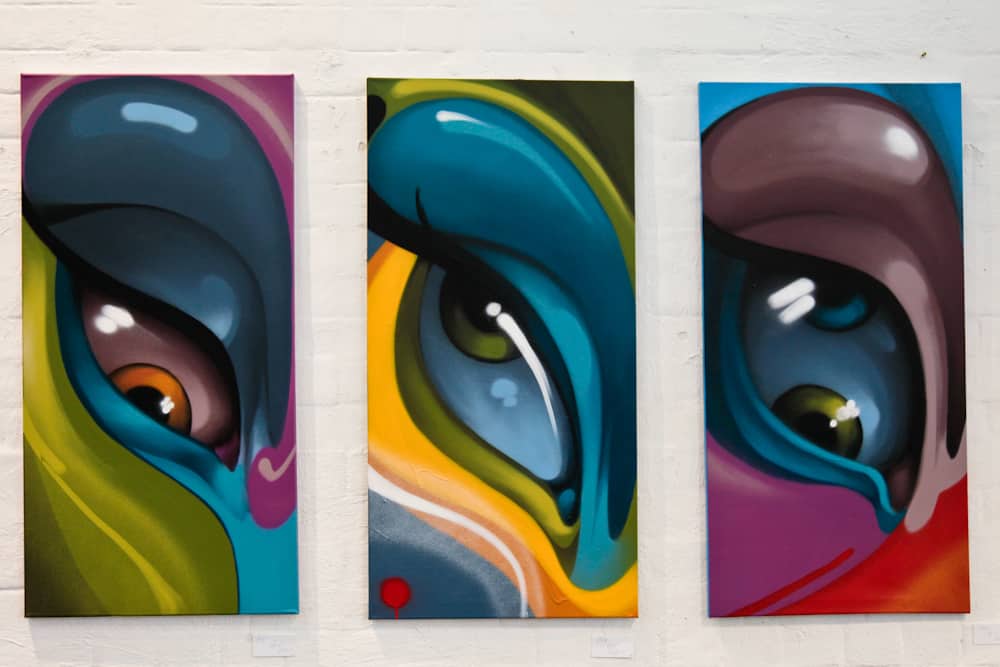 RASTY, Eye 1, Eye 2, Eye 3,  Styles from the Streets, Gallery
What do you think about Urban Art being commissioned off the streets and into the gallery space?
CURIO: [Like] the evolution of any art form, it was inevitable that it would slowly start creeping into the galleries. It’s just a matter of what the artists put out in the galleries. So, all in all, it’s good that graffiti can make it into these more high-end spaces, and get opened up to a fancier (and paying) audience.
VERONIKA: Very good, it’s how I pay the rent!
JESTR: I think it is a natural happening as all things that become popular seek other avenues to connect with a larger audience. It’s like a river running with momentum through relatively uncharted land, where the water will seek avenues to run. Some parts of the larger whole advocate urban art in galleries because of the promise of financial gain and/or popularity. Some parts because it helps create the infrastructure for graffiti and urban arts in general in South Africa, and ideally their own, as their context and the context of the “scene” are very closely related. Others because in terms of “frame of reference” of what a successful artist career should be: having work in a gallery is a manifestation of that perceived or desired success. Having said this, I think its idealistic intent is for everyone to move forward (what ever that may be for them), which I suppose is good. In the long run, as long as showing works in galleries doesn’t influence your artistic choices because you feel you want you works to sell or be the hottest at the show it’s fine. However true intent always comes through in art and if you’re able to understand the linguistics you’ll be able to see the integrity.
Looking at it from the perspective that most graffiti artists don’t have formal training nor fine arts experience per se, the concept of having works in galleries and having their works be more than just ‘vandalism’ or a piece in some other obscure and obscene space is appealing (in relation to the broader concept of artist’s success). Having said this I think that any explorations into a field that is unknown to you with the intentions of broadening your experience is positive. It helps raise the general standard and ideally the grade of the game as a whole, so it is good. All in all, staying true to self and where you come from as an artist is important, just as it is important as an artist to broaden yourself as far as possible to gain a first hand experience of all facets of life so you may visually comment with integrity. The balance is required, and only those with true balance stay on and the others fall off eventually. 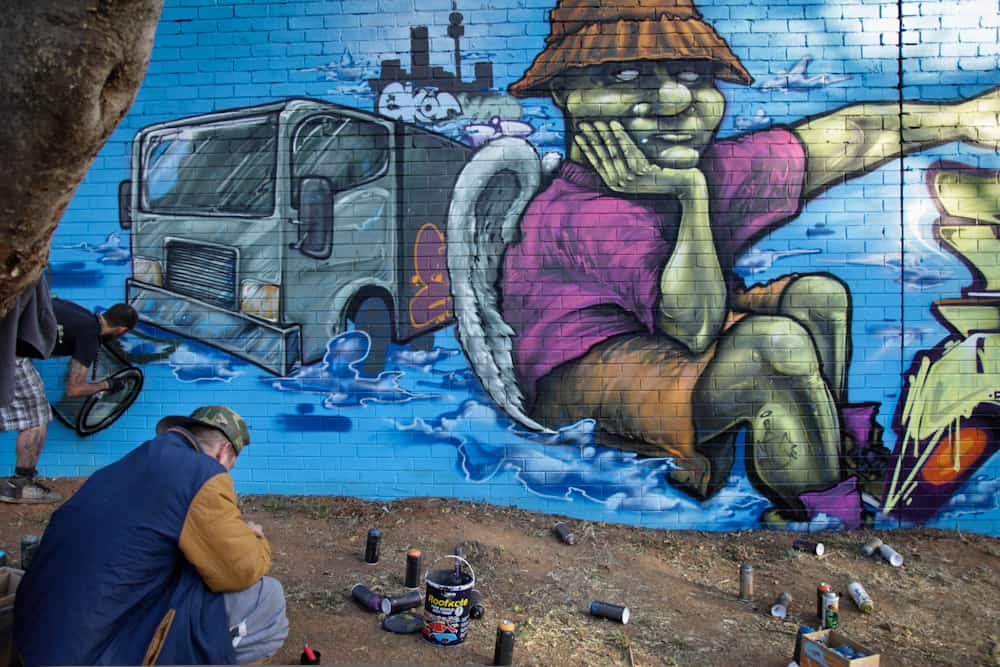 JESTR, Styles from the Streets, Graffiti Jam
What do you think the future of urban art looks like in South Africa?
VERONIKA: The street art scene in South Africa is booming because our youth have a lot to express. And street art doesn’t discriminate; just find a wall and pour you heart out.
Forty Forties: I think the quality of work is on the up and up. Public perception on the other hand depends very much what province or even suburb you find yourself in. I’d say that JHB is by far the most liberal with CT facing a lot of pressure from bylaws and city councils. I can’t speak about DBN from experience but I don’t really sense there’s a booming scene there. The future looks interesting. Challenging, but interesting.
What is your view on the debate surrounding graffiti vs. street art? Do you make a distinction? And where does your work fit in?
PAGE: Yes there is a distinction. Firstly, there are a variety of mindsets or approaches to graffiti. I think that there is a difference in the kind of writer that only does tags or throw-ups to achieve notoriety and the kind of writer that is engulfed in developing the shapes, contrasts, movement (whatever it is that captivates the writer) within his or her piece or graffiti lettering sets. There are writers that choose not to paint a background or characters, (the things that are easier for general society to absorb or relate to), and there are the writers that fall down the rabbit hole of colour and patterns. The commonality here is the strict use and mastery of one medium though: spray paint.
Some have dubbed the new-wave graffiti as postmodern graffiti − more backgrounds, characters and concepts. I guess this is where the fore-planning that goes into street art (the cutting of stencils, or painting of wheat pastes that means what you see on the street is preconceived) meets the spontaneity of graffiti (applying a memorized or improvised tag or throw up with a degree of looseness that relies on movements of the artists entire body in comparison to the stroke of a brush). So in other words, “post modern graffiti” quite often includes the process of preconceiving a composition or concept.
The street artist employs a wider variety of mediums and prefers not to be confined to the parameters of graffiti. For example, the pieces created on the street may not have lettering anymore and the use of brushes, stencils and wheat pastes becomes more prevalent in the works, and the success of the artwork does not rely on the artists control over a can of spray paint. I think the work that I do on the streets is typically within the parameters of postmodern graffiti.
Thanks for the opportunity to voice my opinion; I would like to give a shout out to Rasty for organizing an incredible event; to OWN Crew; CB-DS and to all the active writers that go out and contribute to the sub-culture in South Africa.
Find me on Instagram; and my husband (also a graffiti artist) Zesta 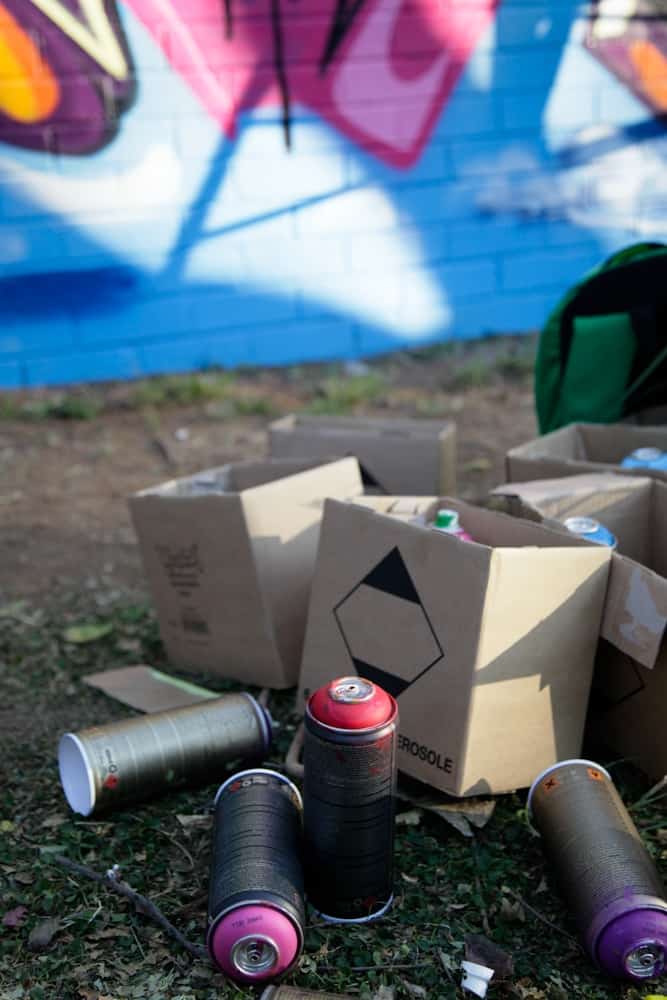 Styles from the Streets, Graffiti Jam
Interviews and images by Fay Jackson for Art South Africa