Such Sweet Thunder: Alexandra Karakashian and the Catastrophic Imagination

Alexandra Karakashian’s rise to celebrity status was rapid, as her debut coincided with the international resurgence of interest in abstraction. However as the SMAC exhibition ‘GROUND’ reveals, her paintings are an acquired taste for she is utterly uncompromising: refusing point-blank to make any concessions, or woo the viewer with blandishments. Alexandra holds the merely decorative in contempt, and concedes that the shimmering beauty of her paintings is as lethal as the Siren’s song that almost lured Ulysses and his crew to shipwreck and a briny grave. 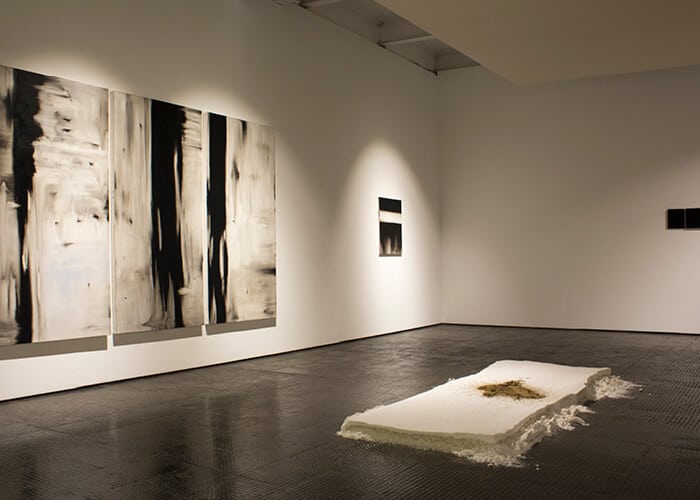 Alexandra Karakashian, installation view of ‘GROUND’ at SMAC Gallery, Cape Town. All images courtesy of the artist and SMAC Gallery.

Alexandra, who has continuously studied art for twenty-two of her twenty-six years, evolved her signature palette of whites, blacks and grays at Michaelis, and she has adhered to it ever since. This monochromatic abstinence is almost absolute, though the lightest flushes of blue soften Deplore 1, 11 and 111. The smaller gallery at SMAC is something of a sanctum, and its quiet, reflective atmosphere inhibits chat, and affords the psychic space that allows for total immersion. One does not glance at a Karakashian: they kidnap the eye and only release their grasp when the polarities begin to yield up their meaning.  Darkness/light, black/white, day/night, earth/sky, life/death, time/eternity, consciousness/unconsciousness, wholeness/dissolution and presence/absence – all these polarities abound in such inexhaustibly dense physical, scientific, ethical, moral and metaphysical repercussions that intellectual vertigo assails one. Relatively small canvases generate such a sense of boundlessness that one remembers Pascal’s dictum: “Nature is an infinite sphere of which the centre is everywhere and the circumference nowhere.”

Alexandra loves the paralysing enormity of great epic American canvases like Jackson Pollock’s Blue Poles, which measures 2,100 x 4,860 centimetres. Her driving ambition is to attain such scale, for Alexandra aspires to the over-arching and all-encompassing. She considers her current output as mere exploratory drafts, investigative sketches in her ongoing attempt to attain the height of her powers, and capture something far vaster and more enveloping when her canvases, like quick-sands, will suck the viewer into their fathomless depths. 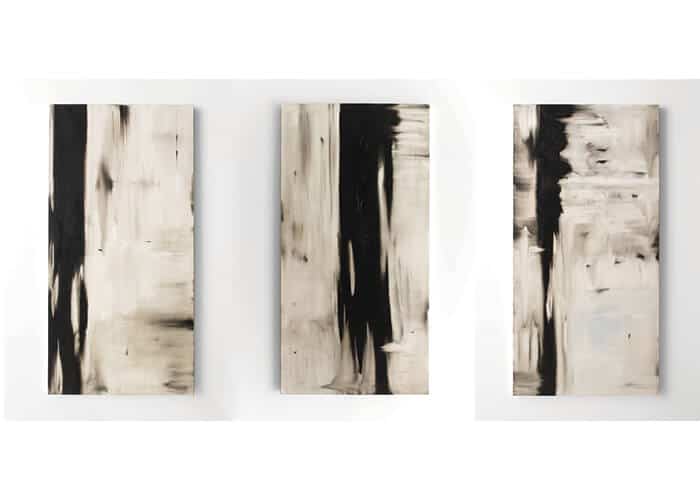 Her triptychs, such as Deplore 1, 11, and 111, possess an epic sweep, miraculously conveying the stupefyingly colossal, both spatially and temporally. Her tracts of misty voids seem to stretch endlessly backwards over immeasurable astronomic distances, while the light seems to emanate from some long dead star, traveling for aeon after aeon before it finally rejoices our eyes.

Alexandra is the doughty Virgil who guides us, like Dante, through titanic cosmic landscapes as eerie and ominous as his murky, accursed Inferno.  Time dilates, and space expands into bottomless abysses, chasms and steep, plunging ravines suspended amidst scudding clouds, dim flashes of lightning and vertiginous plummeting flights into depth. To use the Italian noun which is now almost exclusive property of Michelangelo, there is a terribilità – a terrifyingly awesome emotional intensity – about Karakashian’s vision of this looming Armageddon. A brooding sense of impending doom enshrouds every image. They are all the progeny of the catastrophic imagination and the Romantic sublime – 21st century versions of the murderous blizzard burying Hannibal’s floundering army of warriors and elephants amidst the snow on Turner’s dizzying Alpine peaks. The only distinction is that in Karakashian’s work disaster is man-made.

Alexandra has an abiding obsession with the physical enormity of the universe and events of incommensurable moral gravity like the Shoah. Surely her extreme chromatic restraint is the outcome of multiple family tragedies and duress? In April of 1915 her great grandfather along with his Armenian relatives were forced to watch one of his uncles, a priest, being publicly tortured to death in a public square. His Turkish assailants then locked the cleric’s family inside their home and torched it so they burned to death. The massacre reached its height before her great grandfather escaped.  However these were not the only inconsolable losses that the Karakashians sustained.

In Johannesburg one of Alexandra’s uncles was robbed at home by night. He gave chase to the thieves who stabbed him in the heart with a screwdriver and left him to bleed to death beside a stream. These legacies of grief always underscore Alexandra’s work with a poignancy and uncomprehending ire.  Mourning is her dominant leitmotif: she bewails humanity and the moribund planet. The God-almighty clash of elemental physical forces the artist so harrowingly depicts, acts as a metaphor for mankind’s descent into chaos and the probable demise of the Mother Earth. Gerard Richter’s writings and bleak black and white painterly meditations on Nazism and its aftermath, transformed her painting into rituals of mourning and expiation, as did Anselm Kiefer’s scenes of post-war German devastation, both physical and moral.

Foreboding overwhelms one as one enters ‘GROUND’ At the centre of the space lies a smooth, solid slab of salt about the size of a grave. It rises about nine inches from the ground and around the edges, the solid salt crumbles and breaks off into lumps and nuggets like those of a dissolving iceberg. This curiously mortuary rectangle is surmounted by a catafalque of canvas with a spill of sump oil at its centre.  This drips onto the slab of salt soiling its pristine white, while slowly staining ever larger areas of the canvas above. ‘GROUND’ is all about process and pollution, build ups of industrial waste, rising seas, and imminent flooding. This particular work Collapse, has a terminal quality about it.  It is an envoi to the planet as we know it, and many of the painting’s titles – Collapse, Displace, Omit, Purge, Fracture and Split – suggest this process of spoliation. 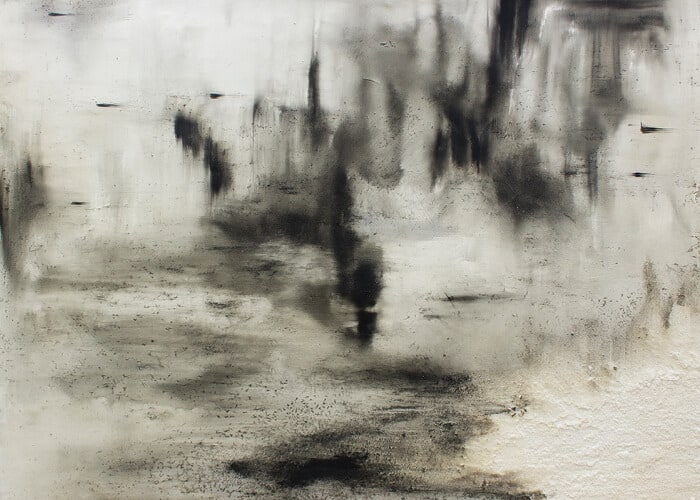 Alexandra wishes to arouse feelings of discomfiture in the viewer for she is continually appalled by the faceless hordes of homeless migrants living on our country’s treacherous streets without employ, money, food, shelter, land, possessions or anything which could afford them some sense of security.  The ruination of the ecosystem, the political instability of our country, a world in the grip of rabid fundamentalist terrorism and the ever-present threat of nuclear reprisals, expose the artist to acute panic attacks when she undergoes disquieting out-of-body experiences, takes leave of her physical person, and sees herself from above, as if her eyeballs had taken wing, like pigeons affrighted by the boom of Signal Hill’s noonday canon. Such tensions impart a jittery edge to her painting. Fear floods her canvases where earth seems torn apart by conflict, greed and rapacious ecological onslaught. As the descendant of scattered refugees, Alexandra’s inaccessible, storm-tossed geographies approximate to the trauma of expropriation and raise the eternally contested issue of land ownership.

For Alexandra, art involves no catharsis: but every so often a delicious chemistry weaves its magic; the tones attain perfect harmony, and the gestural movement assumes a melodic rhythm and flow. The shifts in the tempo, pace and rhythm of the brushwork veer from whispering diminuendos to cymbal-clashing accelerandos.  “Painting is mainly slog, though it is these odd moments of enchantment and abracadabra when terror and beauty co-exist that make the slog worthwhile.”

Although Alexandra’s studio is a rational Bauhaus cube filled with fresh air and radiant light, her Mephistophelian paraphernalia steep it in the spooky necromancy of Prospero’s cell. Alexandra, an exquisite black-lashed Miranda, bustles about amongst her sinister tackle of innumerable little pots, jars and cans, filled with weird unidentifiable potions. Jugs brim with tarmacked black muck, or allow their foul contents to trickle over in viscous fly-trapping spills. What do the cupboards contain? I wonder?  Homunculi? Twin-headed calves in formaldehyde? Pale embryos slowly bloating in their pickling fluids? I daydream for, despite her terrifying arsenal of materials, Alexandra is as wholesome as a crock of fresh clotted Devonshire cream. 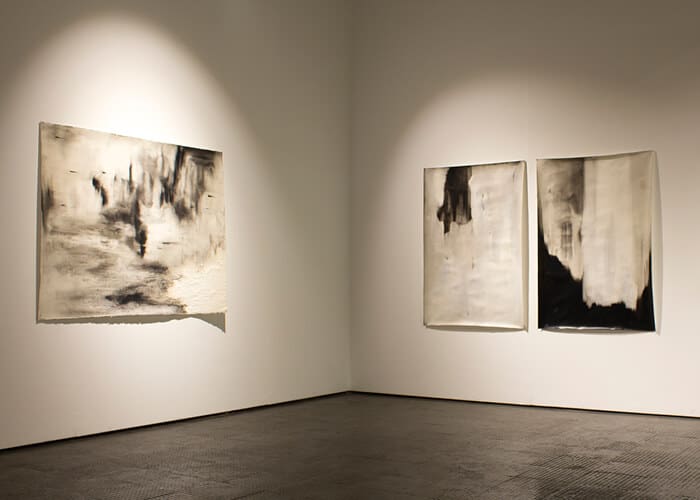 Her paintings remind me of Clifford Still as both resonate a monumental architectonic majesty. Although nominally an abstract artist, many of Still’s works vaguely evoke crags, cliffs, precipices, caverns and caves. Alexandra too paints earth, even if it often seems blasted into the stratosphere, for she is far more of a dynamic action painter, and her black stalactites and stalagmites that stand for earth, extinction and the void, are painted in frenzied vertical slashes ripping angrily up and down the canvas. There is an Appalachian grandeur of composition in Alexandra’s tall precipitous rifts, tors, clefts and crags. Although she identifies with American Abstract Expressionism, she harbours reservations about the phallocratic triumphalism of their canon, and she mutes the testosterone-charged idiom through resort to Helen Frankenthaler’s trademark process of staining to achieve a caressing feminine softness and blur. This also becomes evident in the extreme delicacy of the subtle shifts of tone seen in her white spaces of mist, drizzle or fog. These are lightly brushed in calm thin strokes with the weave and warp of the canvas showing through in moments of idyllic calm.

“The landscape is not an object of contemplation that we survey from afar. It surrounds one, and I engulf the viewer within it.” Not only do her landscapes present all sorts of obstacles to sight, but the annihilating destructive might condensing within the frame appears to erupt outwards and invisibly spiral over the gallery walls, ceilings and floors, energising the entire ambiance.

“I want the eye to scurry and dart over my expanses” she says, “I want it to dance”, and to facilitate this optic gavotte, Alexandra does not simply stand in front of her canvas and paint. No! No! No, the lady bangs the canvas down onto the floor, and roughly bashes it sideways and upside down on the easel. Often she disrupts the landscape by shifting the land masses onto a vertical rather than a horizontal axis, fills her canvases with whirling trajectories using her fingers, hands or brush, or pours thick heavy gravitational dollops of pigment onto the canvas so they run downwards in streams of lacquer-like lustrous blacks.

The paintings never depict an event, their pent-up accumulations of rampageous energies convey the destructive pressures convulsing the planet con furioso. Her images are subject to an astonishing freedom of interpretation. Alexandra’s lux ex tenebras, the radiant light pouring out from the coal-black shoals of storm cloud can be construed as a rainbow-like act of reconciliation or the final blaze of glory on doomsday.   The outcome is up to us.

Lloyd Pollak is a Cape Town-based writer. A graduate of UCT and the Sorbonne and the Victoria and Albert Museum Course, he has worked as a lecturer on the Fine and the Decorative Arts in England, Australia and Ireland.

Illusional and philosophical drawings at Goethe-Institut