Sue Williamson’s ‘The Past Lies Ahead’ at Goodman Gallery in Cape Town. By Khehla Chepape Makgato

It is hapless (and yet not possible) to write about South Africa without persistent references to racial grouping, legalised through the Group Areas Act of 1950, Immorality Amendment Act of 1957, Bantu Authorities Act of 1953 and Native Labour Act of 1953, among other laws and acts. These laws characterised apartheid and to avoid such references would be confusing and require a total distortion of historical realities. The title of veteran artist and arts writer Sue Williamson’s exhibition, ‘The Past Lies Ahead,’ at Goodman Gallery (Cape Town), suggests different types of chronicles. 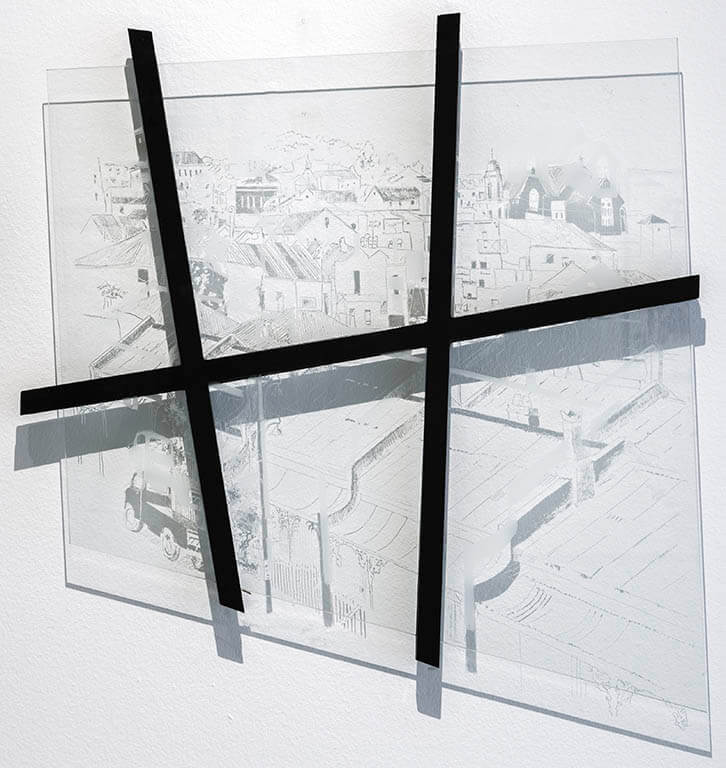 Williamson’s latest exhibition seems open to the charge that visual art is given a virtual independence from real experiences, given that creative thinking and production relies heavily on imagination. In this show, visual culture is used in a far more active sense, concentrating on its determining role in a wider culture to which it belongs. Popularly known to many as an arts writer and cultural worker, Sue Williamson’s discontentment with apartheid’s oppressive laws led her to become an activist too, but she has managed to circumvent the pothole of being caught in an apartheid-era aesthetic, a malaise some other South Africans have suffered. Her sentiment about apartheid is not time-bound. The oppressive apartheid legacy is an infectious mindset that radically corrupts self-perceptions and sociohistorical narratives, a vigorous and unceasing process initiated to cause despair, despondency and a collective death wish.

Describing his approach to writing, Ngũgĩ Wa Thiong’O wrote: “One has important ideas that arouse one’s anger, passion and commitment but of course when one is actually writing fiction or poetry and so on it is very important that one lets those ideas emerge from concrete reality.” There is a great timbre in Williamson’s work when observed in relation to Thiong’O’s view. Such resonance is vivid in the work titled Pass The Parcel, Jacob a piece out-and-out on president Jacob Zuma’s rape trial snapshots. This work of twenty-one panel pieces of archival prints on Tyvek mixed with with found objects is like poetry; the more you read the headlines in it the better you understand the past dark cloud hovered around Zuma during and beyond his trial. 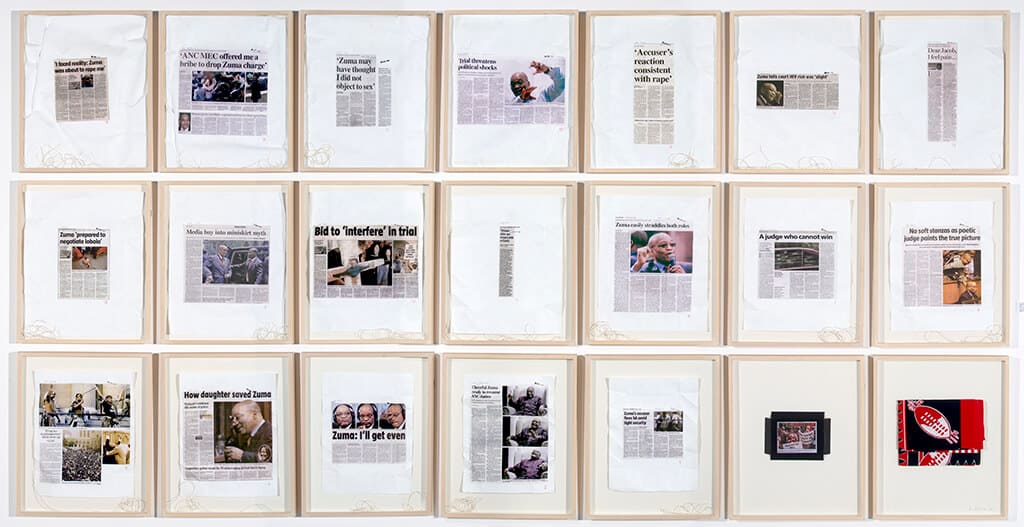 The assortment of protests and jubilations make picturesque and chromatic justice to this panel. Headlines from the newspapers fought their way onto street light poles for attention as much as Zuma’s supporters on this case around the high court. In her visual poetry, there are ‘no soft stanzas’ as poetic interpretation painted in an article written by Karyn Maughan, who covered the marathon of this trial at the Johannesburg High Court. Maughan introduced one of his articles by quoting the British Nobel Laureate Rudyard Kipling’s famous coming-of-age poem ‘If’ – arguing that had Kipling known about this case, he might have added to the poem this line “If you can control your body and your sexual urges, then you are a man my son.”

Williamson’s panel includes an additional voice of reason in that fateful trial – an open letter to President Jacob Zuma from gender and political analyst Nomboniso Gasa. In her letter ‘Dear Zuma’ Gasa asks, ‘What guidance does the behaviours of your legal team give us at the time we are trying to transform our legal framework and build a society that cares for every human being, especially most vulnerable?” The letter may have been written almost a decade ago but like Williamson’s exhibition title suggests, ‘The Past Lies Ahead’ remains relevant as we are faced with fermented realities of the past which linger to contaminate the legal framework, under Zuma’s administration, where Section 9 of The Constitution is not respected, and where loyalism makes some cabinet ministers sweat and lie in defence of one man. 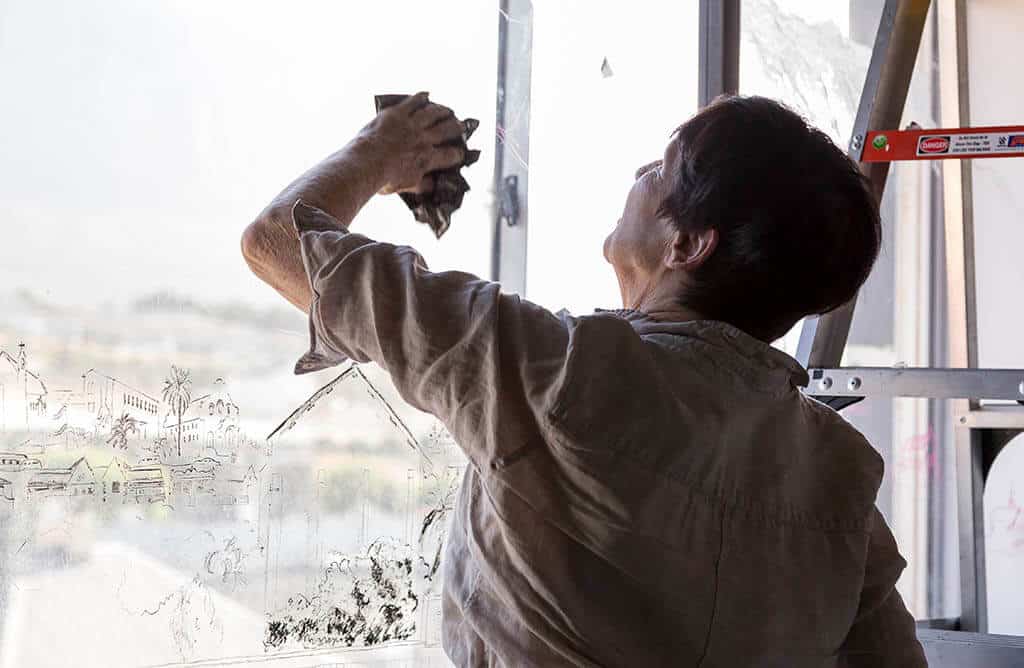 Perhaps Ngũgĩ Wa Thiong’O was correct in his novel Wizard Of The Crow, set in the fictional Free Republic of Aburiria which dramatizes with penetrating observation a battle for control of souls. In the novel, Thiong’O dwells much on the submissive and surrendering behaviour of ministers towards their ‘Ruler.’ Ministers are deployed depending on how protective and supportive they are towards the Ruler. “The story goes that Markus used to be ordinary Member of Parliament. Then one day he flew to England, where under the glare of publicity he entered a major London hospital not because he was ill but because he wanted to have his eyes enlarged, to make them ferociously sharp so that they would be able to spot the enemies of the Ruler no matter how far their hiding place,” (Thiong’O, 2006). Such an act by Markus was noticed and the Ruler was so touched by his devotion and public expression of loyalty that even before the MP returned home from England the Ruler had given him the Ministry of Foreign Affairs, an important Cabinet post.

In her book titled The Kanga and the Kangaroo Court – Reflections On The Rape Trial of Jacob Zuma, Mmatshilo Motsei argues that “One good thing about the charade surrounding Jacob Zuma’s trial is that it gives us an opportunity to stop and reflect as a nation.” The president’s trial gave the nation a chance to reflect on the legal system and who it serves better than another. “The trials present us with a crisis that enables us to look beyond and ask searching questions about the meaning of justice, democracy and power,” observed Motsei.

The exhibition is not only a testament to Williamson’s dedication to socio-political activism and arts and cultural resistance. At the heart of her work she questions what a young generation can learn from a concept of democracy for, and discards the possibility of political and economic temptations of exclusion, hatred and contempt of the other towards others.

Sue Williamson’s ‘The Past Lies Ahead’ ran until 2 March 2016 at Goodman Gallery, Cape Town, South Africa.

Khehla Chepape Makgato is a Joburg-based independent artist and arts writer, contributing articles regularly to ART AFRICA and The Journalist and other online publications. He works at Assemblage Studios and is the founder of Samanthole Creative Projects & Workshop, a community-based art organisation where he facilitates and coordinates arts and literacy outreach programmes for the youths.