Award-winning Cape Town-based cultural analyst, writer and educator, Ashraf Jamal, reviews the 2015 FNB JoburgArtFair for ART AFRICA. “Just how ‘African’ is African art?” asks Jamal, “How transcultural? How diasporic? It would seem that each of these questions… proved critical to [Lucy] MacGarry’s directorship.” 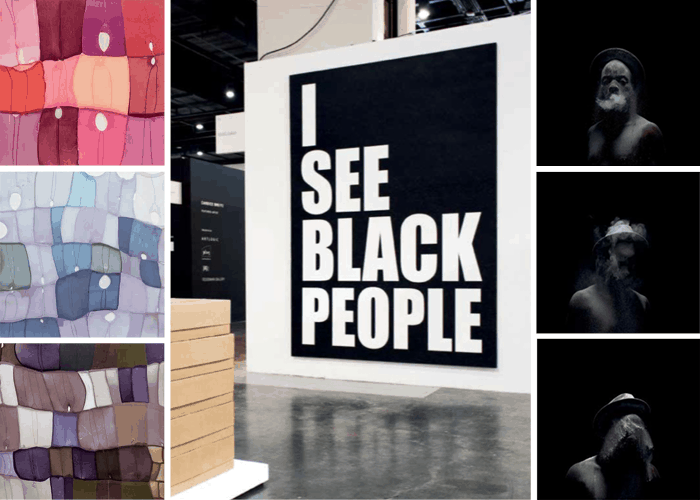 In Ways of Looking: How To Experience Contemporary Art Ossian Ward notes that “More than ever before, looking has become a matter of Darwinian survival – only the strongest images make the grade, and even then we only give a cursory glance to what we think we’re seeing… Much of our culture, infused as it is with the multisensory slap- in-the-face shorthand as our hurried existences, can be difficult to look at or get a grip on.”

This slap-in-the-face reaches overdrive in the context of an art fair; a pop-up souk, maze, elliptic mirage, in which we find ourselves reeling under the manic weight of affect. It’s not surprising, therefore, that we find ourselves barely able to settle upon a feeling, let alone a thought, regarding the emporia in which we, like the poet Stevie Smith, find ourselves “not waving but drowning.”

A simulacral abyss, art fairs are anxious enterprises in which dealers and their assistants feign calm under a pulsing red light; visitors loiter, prattle, drift; buyers – the revered few – breeze about with a probity as coolly cynical as it is decadent. But art fairs, at their best, are never merely dealerships; they concentrate a fickle, even schizophrenic energy, upon an idea.

In the South African and sub-Saharan context the FNB JoburgArtFair, under Lucy MacGarry’s directorship, proved a worthy contender on the ideational front. What it sought to fulfil was the dream of a reconstructed Africa which challenged essences as much as it refused neat objectifications of place, identity, selfhood or race.

As Takashi Murakami’s dealer Jeff Poe wryly remarked in Sarah Thornton’s Seven Days in the Art World, “At the end of the day our business is to sell symptoms articulated as objects.” What then are the symptoms which emerged beneath the convivial gloss of the FNB JoburgArtFair?

Perhaps J.M. Coetzee, in White Writing, expressed it best when, in his response to South Africa’s identity crisis – including his own (he was yet to write his scandalous opus Disgrace) – he noted the emergence of a world which was “No longer European, not yet African.” It is this interregnum, this intransitive moment which, I think, best describes the ongoing deferred clarity which plagues our art world.

Caught between the banal narrative of nationhood, the fantasy of Africanity and the yearning to fully enter a globalised world, the FNB JoburgArtFair in effect proved an eloquently pained and confused answer.

The question raised by Koyo Kouoh in Condition Report: Symposium on Building Art Institutions in Africa persisted: “How is Africa after fifty years of independence, really determining its artistic landscape?” While Simon Njami added the caveat: “Can we grasp the needs of our times with contemporary tools? Can we move beyond the codification of a monolithic history of the world that is outrageously simplified? Can we change the analytic schemas whose purpose was to lock identities into geographic essentialisms?”

Just how ‘African’ is African art? How transcultural? How diasporic? It would seem that each of these questions has proved critical to MacGarry’s directorship, for while fairs favour the more powerful dealerships, it was clear that MacGarry’s greater focus was directed to brokering a novel Esperanto in which African art could assume what Njami termed ‘a new global citizenship.’ In other words, MacGarry was not merely rebooting a ‘new scramble for Africa’ – an unfortunate phrase at best – but seeking to articulate the reality, after Alexander Dorner, of Africa as ‘a power station, a producer of new energy.’

At the fair, it was evident that African art was not merely a rebooted plaything, sex toy or fetish, but a potent resource in-and- through which to change global – largely Western and Occidental – perceptions. And here the winner of the FNB Art Prize, Turiya Magadlela, epitomised this brilliant push forward. Abstract works made with stitched squares of laddered, broken pantyhose, Magadlela’s work reinforced the links between up-cycling and innovation – key to both Africa’s design and art worlds.

On the other hand, there was a painting by Georgina Gratrix (exhibited by SMAC) – strikingly gaudy, thickly painted, encrusted with rhinestones – which captured the mystique of a visceral, ugly, irresistible African unconscious. But then again, more pastiche than parody, in this work Gratrix’s ‘Africa’ becomes a thing de-activated, powerless, yet nevertheless utterly haunting. Thickly descriptive, it conveyed an ‘Africa’ at once fathomless and curiously vapid.

In striking contrast SMAC also gave us Ed Young’s biting white on black text- work, I SEE BLACK PEOPLE. Gauche, tactless and ugly-yet-true, this work caused great consternation, anxiety, outrage and despair. But once again, a work tapped the unconscious and unstated whiteness of the South African art world in which the catch- all, ‘black people’ – a generic, dehumanised descriptor which denies singularity or complexity – reaffirmed an age-old discriminatory and reductive lens.

If SMAC proved an aggressive theatre, others such as Johans Borman and the Barnard Gallery created edified and sacramental worlds which enshrined Modernism and Impressionism respectively. As pop-up spaces go, these were remarkably elegant. With paintings by Alexia Vogel, the Barnard Gallery created a church; while against a grey backdrop Johans Borman gave us richly drenched oil paintings – by Irma Stern, George Pemba, Cecil Skotnes, Richard Mudariki, Owusu-Ankomah, and Hennie Niemann Jnr – exquisitely off-set by Anthony Lane’s dripping metal sculptures.

While Modernist African art has maintained its global traction – also evident on the Everard Read stand where, surprisingly, Nigel Mullins’ ingenious oil painting of Queen Victoria did not sell – it was that strange attractor, dubbed ‘contemporary,’ which ruled the roost.

Here it was the Stevenson Gallery, the hub for the potent Zimbabwean fauvist painter Portia Zvavahera, and WhatIfTheWorld which proved the most comprehensive brokers of symptoms. Athi-Patra Ruga’s bling figure, a sculptural echo of Gratrix’s toxic portrait, dominated the WhatIfTheWorld stand and proved a smart counterpoint to Mohau Modisakeng’s triptych from his ‘Metamorphosis’ series. Monochromatic, enigmatic, soulful and seductive, Modisakeng’s di-bonded triptych seemed to perform the spirit that MacGarry sought to conjure – the sublimity of a moment in search of itself.

In The Wretched of the Earth, Frantz Fanon beautifully articulates this moment: “It is in the zone of occult instability that the people dwell and the revolution comes from.” At its best, the FNB JoburgArtFair proved to be this zone. For while, after Coetzee, we have the sense of a world “no longer European, not yet African,” we also have the rider, a world in the throes of rediscovering what it means to be African.

That world, as stated earlier, must necessarily also be global and diasporic. Africa, or matters, drives or objects deemed ‘African’ are also, in this rapidly morphing art world, global. As Hans Ulrich Obrist reminds us, we are dealing with “a plurality of temporalities across space, a plurality of experiences and pathways through modernity that continues to this day, and on a truly global scale … We are now living through a period in which the centre of gravity is transferring to new worlds.”

South Africa is one such new world. As a platform, its dealerships, fairs and auction houses are increasingly assuming a greater world-wide leverage. Everard Read’s CIRCA-London (due to open in Chelsea in February next year) is a case in point, as is the deepening presence of 1:54 – with its tentacles in New York – and the newly minted AKAA – ‘Also Known as Africa’ – in Paris. In these and other ‘power stations’ we are seeing the emergence of an occult zone in which art – as an energy line, affect or symptom – is redefining taste, principle and value.

For me, one of the most striking game-changers at the FNB JoburgArtFair was nineteen year old Tony Gum, represented by the Christopher Moller Gallery. An instagrammer, performance artist and photographer, Gum seemed to have exorcised all demons to blithely announce a secular worldliness. Purged of anxiety, trauma and self-doubt, Gum – a poster girl for the fair – gave us works which effortlessly fused tradition and post-postmodernity. Self-portraits all, her images redefined the ubiquity of Coca-Cola, and brands more generally, and, through a brilliant reworking of the image and myth of Frida Kalho, replaced pain with uproarious levity.

After Julian Stallabrass, Gum’s artworks are ‘High Art Lite.’ Driven by the digital sphere, Gum, after J.M. Ledgard, reminds us that “Connectivity is given: it is coming and happening and spreading in Africa whether or not factories get built or young people find jobs. Culture is being formed online as well as on the street: for the foreseeable future, the African voice is going to get louder, while the voice of ageing Europe quietens.”

Whether or not you agree, there is no disputing the fact that networking, flexibility, open source and flow are the determining factors in changing the fate of Africa, together with its vast youthful population. To understand how Africa can be changed – the core question posed by Lucy MacGarry – we must never shirk the fact that we are dealing with symptoms articulated as objects.

Ashraf Jamal is a Cape Town-based cultural analyst, writer and educator. He is the former editor of ARTsouthAFRICA and currently lectures in Film & Media Studies at Cape Peninsula University of Cape Town (CPUT).

The FNB JoburgArtFair ran from 11-13 September 2015 in Johannesburg, South Africa.