in News Articles 2013
Share on facebook
Share on twitter
Share on email
Share on whatsapp
Durban-based artist, illustrator, graphic designer and painter, Wesley van Eeden was commissioned by Queens College in New York City to paint Taxi Dance, an artwork he conceptualised as part of the college’s Year of South Africa programme. ARTsouthAFRICA caught up with van Eeden to find out more about the work and the artist’s trip to NYC. 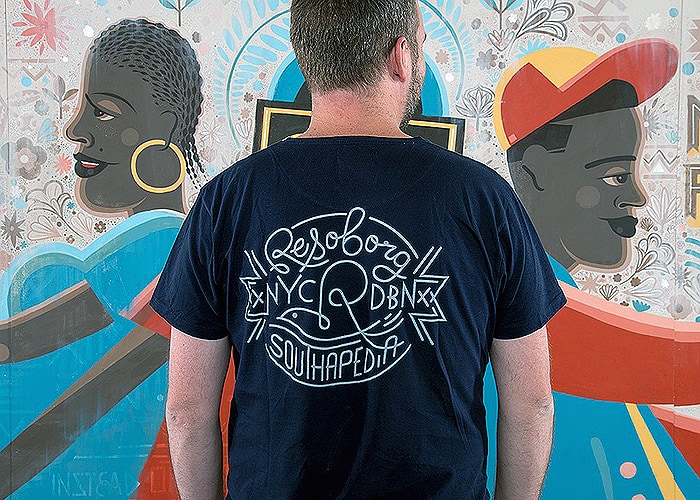 ABOVE: Wesley van Eeden with Taxi Dance. Photograph courtesy of the artist.
According to van Eeden, Taxi Dance represents contemporary life in South Africa, “the vivid colors and energy of its cities, its distinctive street signage, and the rhythm of urban life in a nation whose economic inequalities can be crippling. Like hip hop crew BoznBuck$’s famous taxi dance, the painting emphasises cautious hope for a better future in South Africa.”
The taxi van is the primary mode of transportation for South African’s urban poor. In van Eeden’s words, “The taxi dance is unique to our culture, as the mini bus taxi plays such a big role in South African transportation. In many ways this painting is celebrating the mini bus taxi, which started as an informal business, but now provides a much better transport system than is provided by the government. The taxi bus is a metaphor for how true change can be achievable from the ground up in South Africa, and the government’s inability to provide efficient solutions to some of the problems the public is facing.” The taxi dance represents joy and determination, qualities van Eeden believes are necessary to achieving the kinds of change he’d like to see in his country. 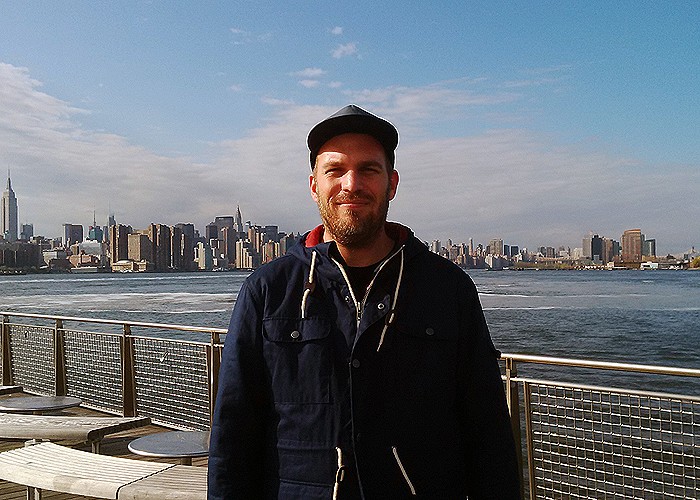 ABOVE: Wesley van Eeden in New York City. Photograph courtesy of the artist.
Van Eeden wrote about his trip to NYC on his blog, and gave ARTsouthAFRICA permission to re-publish his story:
“My trip to New York City was mind blowing. I have always wanted to visit this incredible place since becoming an artist and it was a dream come true to finally experience this overwhelming city. I was beyond excited. Doctor Jason Tougaw, who is a professor at Queens College, invited me to create a painting with the students of the college that would explore contemporary South African culture. This would tie in with the colleges “Year of South Africa” programme that explores the history and culture of the country.
After a gruelling 24-hour flight and a short taxi drive, I finally arrived on Saturday in the late afternoon at Jason’s apartment in the East Village. I am alone as Jason is away, and I have to come to terms with the fact that I am finally here! I thought I would be ready but I wasn’t… This city is overwhelming! Not just because of the sheer size of the buildings and the city but the amount of people that you see around you on the streets as well. The apartment is situated in a beautiful part of the city – somewhere between where Iggy pop and Blondie live, and probably a host of other cultural icons I presume! I am excited but I fall asleep as jet lag ensues and the police sirens of New York City begin their soundtrack for my dreams.
Sunday arrives as does Jason. I am excited to see him again and we soon start to discuss the project. It’s been almost a year of emails and planning and this is finally happening! Later in the afternoon we venture into the city to get materials for the painting near the Empire State Building. The friendly Italian at the Home Depot store mixes my paint with speed and good service and I am impressed as, by now, Sunday afternoon is stretching into evening and the hardware store shows no sign of closing its doors. Later that evening we eat out at a local Asian place that served some crazy insane tofu; there was amazing art on the walls and the restaurant was jam packed with interesting folk.
On Monday we arrive at Queens College and I get to meet some of the staff and I soon make some cultural connections with Tyler, who is originally from Carolina, and Chris, who will soon become a good host to me during my stay. Both know some of the bands I grew up listening to and it was great to chat to them about music. I then meet Chima who Jason later refers to as a Mensch (Yiddish for ‘good person’). He certainly is, and is possibly one of the funniest guys I have ever met in my life. He helped assemble the four panels that I used to do the painting on. He also has a crush on Yolandi Vi$$er from Die Antwoord and is a champion mountain biker. I am joking about Yolandi, but its a cold hard fact that he is indeed a champion mountain biker! 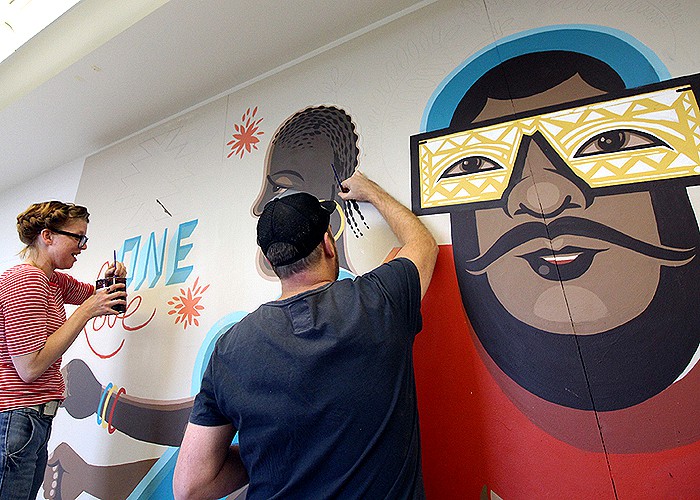 ABOVE: Painting begins with the assistance of Queens College students. Photograph courtesy of the artist.
On Tuesday I begin painting and this is when I meet Joe, who has come to help film the process of the painting. My studio space is in one of the classrooms in Klapper Hall and I slowly meet art students and members of the faculty. Vic, Caroline, Miranda, Steve, Rosanne, Alan, Richmond and others all become good friends as the painting makes progress. I also eventually meet Robine, who I have had some correspondence with before arriving, and she becomes one of the most passionate students involved in assisting me with the painting.
When I was initially thinking about what I was going to paint, I saw the words “mission possible” on the back of a mini bus taxi one day. These words resonated with me as South Africa is facing many problems; crime, poverty, corruption and unemployment are some of the things we are currently dealing with, but I feel there is still hope in creating a better country! I wanted to include these words along with three characters doing the ‘taxi dance,’ which is a dance movement that mimics the culture of the taxi driver. I also wanted to include the Protea, which is South Africa’s national flower and acts as a metaphor for unity.
While working on this painting with the students in New York, there were xenophobic attacks happening across South Africa, as well as the widespread problem of load shedding. I was concerned when I heard that this was happening again. Robine, who is a Queens student, suggested we include a quote from South African artist Peter Clarke’s short story ‘The Changing Of The Season’ in the painting. It’s my hope that this painting and these words inspire people to live by his words: “Instead of worrying who’s got what blood in them, we should just get on with living our lives and doing what we got to do.”
Due to a few issues concerning the plans of the building, there have been delays in officially hanging the painting, but it will be hung this week as part of the permanent collection of Queens College in the public library. This is by far the highlight of my career and I am incredibly honored to have been invited by Jason and Queens College to partake in the “Year of South Africa” programme. Thank you to all the students for the assistance in the production of the painting as well as Christopher Vitale for taking me around the city and for doing the edit of the video. Thanks again for all the hard work that Doctor Jason Tougaw has put into this project and looking after me during my stay in New York City.”
You can see the original post about van Eeden’s trip to NYC HERE, and you can watch the video documenting the process of creating the video HERE.
van Eerden has also produced a limited edition print in celebration of the release of the video online. 10 limited edition prints of the artwork are for sale, signed and numbered, on archival paper. Each print is A3 and comes with one of the ten mixing sticks used in the production of the artwork for R800. All enquiries regarding purchasing of prints can be made directly with the artist himself by emailing him at wesley@resoborg.com 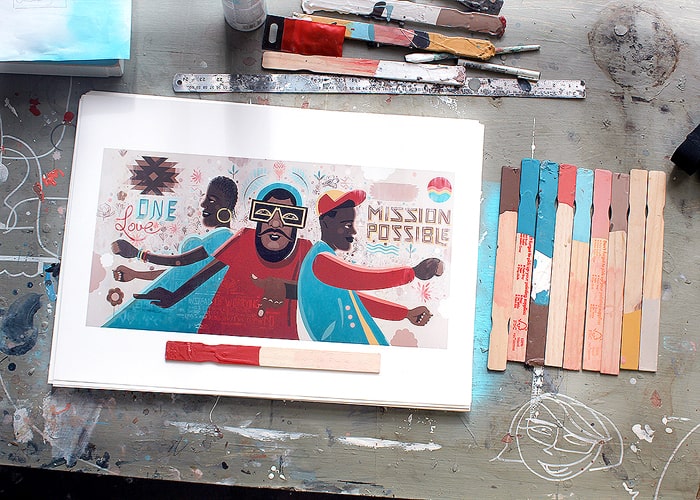 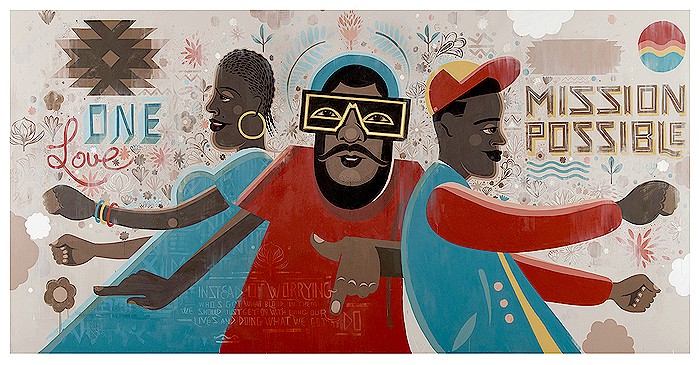 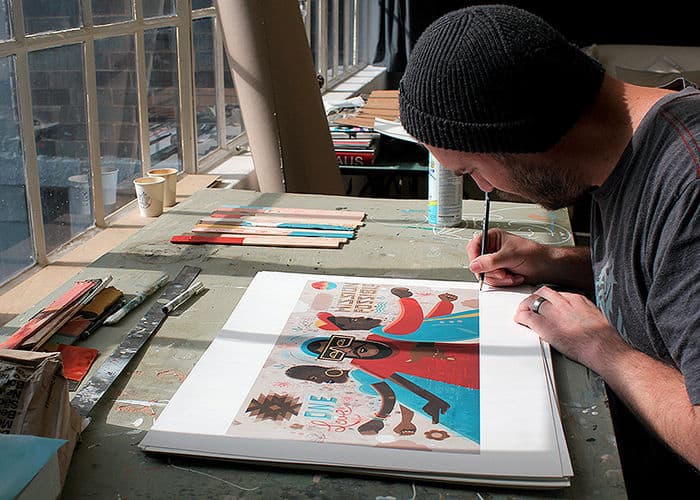 FROM TOP TO BOTTOM: limited edition print of Taxi Dance accompanied by paint-mixing stick used during the production of the artwork; Wesley van Eeden, Taxi Dance, 2015; van Eeden signing prints. All photographs courtesy of the artist.