Standing in a dimly lit studio Kate Tamakloe is trying to remember where she last saw the photo of a major that served in the Ghanaian army. As she does I peer through the frames on the walls at year old faces – some are recognisable, others aren’t. Studying pictures is reminiscent of opening a time capsule or an old family chest full of fading images and memories. 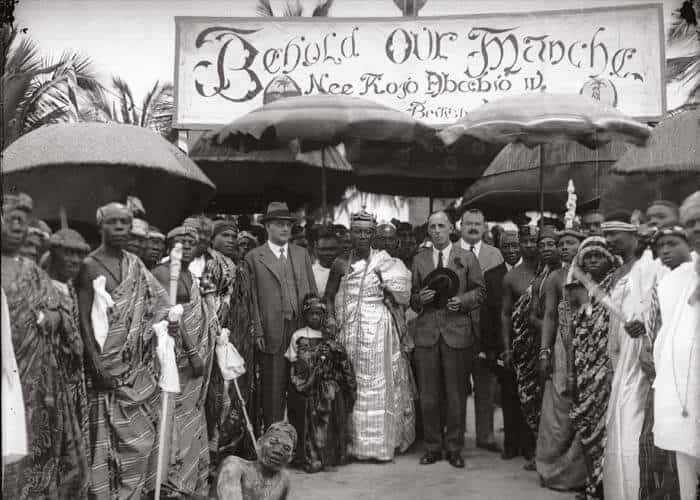 Above Mrs. Tamakloe’s desk is a photo of the United Gold Coast Convention (UGCC) – the political party that sought to gain independence from the British after the Second World War. The Big Six – JB Danquah, Ebenezer Ako-Adjei, Emmanuel Obetsebi-Lamptey, Edward Akufo-Addo, William Ofori-Atta, Kwame Nkrumah, and other UGCC executive members are standing behind and sitting beside a colonial officer who sits front and centre. The photograph doubles up as a symbol of optimism and doom; Nkrumah would leave the party in 1949, just two years after joining. In another photograph a grinning white manager sits amongst his black staff. Next to this is a picture of po-faced newlyweds, dressed to the nines in European formal attire. Across from them a chief and his family pose in traditional-wear.

We are in the Deo Gratias photo studio in James Town, Accra, the oldest of its kind in the city. Established by Tamakloe’s grandfather James Koblah Bruce-Vanderpuije in 1922, it earned a reputation for documenting key events in the country’s history. The coastal town of the Ga-Mashie – at the centre of Old Accra, where the city first developed – has an eventful past that involved incoming regional migration, the slave trade and European settlement. “The Vanderpuijes were very central to the James Town social milieu,” said the historian and architect Nat Nunoo Amarteifio. A wealthy family with properties around the town and in the wider Accra area, the Vanderpuijes had long been part of Accra’s high society. 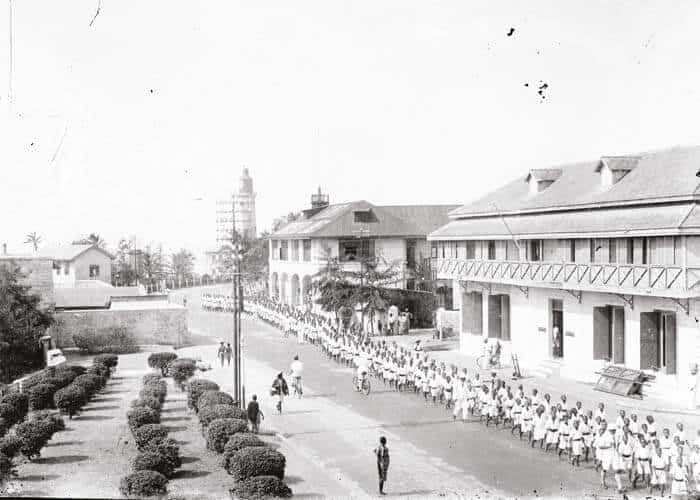 Under the paternalism of imperialism and colonialism the British were pushed to provide Western-style education to a limited number of Africans to serve as middlemen for their administration. When these graduates returned, they came back with the full expectations of being ranked next to the Europeans in the pecking order of power. A new African elite – differing from the positions held by traditional chiefs and rulers – emerged.

In 1877, the British colonial administration transferred the Gold Coast’s capital from Cape Coast to Accra, establishing the city as the cornerstone of the country’s commerce and governance. By the time J.K. Bruce- Vanderpuije was born in 1899, his James Town was an integral part of these activities. “It was a period when society was defining itself because of new opportunities, new power structures,” Amarteifio says. From Masonic lodges to boy scouts, the army and the church, J.K. Bruce-Vanderpuije was kept busy by providing these newly developed associations with evidence of their societal transformations. 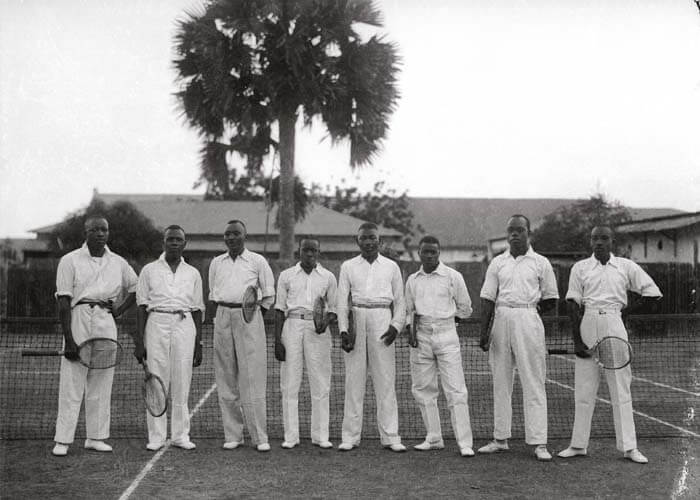 “Deo Gratias came to be because suddenly there were groups who were struggling for power,” Amarteifio affirms. “Deo Gratias chronicled their life.” As a timeline that stretches across generations and eras, J.K. Bruce-Vanderpuije’s images also give a glimpse into the lesser known racially mixed dynamics of Accra at the time. Several photographs depict Lebanese and Indian migrants that had moved to the Gold Coast to set up businesses and trade, with portraits of their children and families forming part of the Deo Gratias archive.

“Photography at that time was far more of an indicator of your social rank than it is today,” Amarteifio informs, “Deo Gratias occupied a particular space at a particular time and did damn good work.”

J.K. Bruce-Vanderpuije was under the tutelage of photographer J.A.C Holm for three years. By the time he set up shop many of the middle-class families (including his own) that had lived in James Town had already decanted to the suburbs of Adabraka and Asylum Down a decade or so earlier at the turn of the century, but the area continued to thrive as part of the city’s central business district.

In 1928 the tide began to change when the British decided to build another harbour further West in Takoradi, where they could extract lucrative minerals directly, thus bypassing Accra. Another blow to the
area would come thirty years later when Nkrumah developed the even bigger Tema Harbour thirty kilometres East of Accra, taking the remnants of maritime commerce from the James Town port with it. Although Accra as a city could withstand the changes, James Town now seemed unattractive for trade thoroughfare. Businesses began to look elsewhere and so did the government, stalling further developments in James Town. After centuries of sitting at the heart of the city, James Town became a shadow of its former self.

Despite the upheavals J.K. Bruce- Vanderpuije kept on working, spending the occasional night in the dark room. As Ghana continued to come into its own he took up more work for companies, covering their product launches and rebranding exercises. In the 1970s age began to take its toll and he handed over the baton to his son, Isaac Hudson Bruce-Vanderpuije, who took charge of the countless glass plates and negatives that had been amassed over fifty years. I.H. Bruce-Vanderpuije was also a trained photographer, and left Ghana for Germany with a scholarship to study photography after Ghana eventually gained independence with Kwame Nkrumah in 1957. As he too began to age he started to lose his sight, leaving his daughter Kate to continue the tradition of carefully preserving her family’s legacy. In six years the studio will be one-hundred years old.

Taking a stroll around James Town, looking at the charm that remains of the old architecture, like that of the Old Kingsway Building, it is not so difficult to imagine the splendour of neighbourhood in its former carnation. At the studio Mrs. Tamakloe shows me pictures of the famous lighthouse. Around it is a clear road, greenery, shrubs and hedges. These days it overlooks the rubble of the now demolished Sea View Hotel, other iconic structures have also been laid bare. 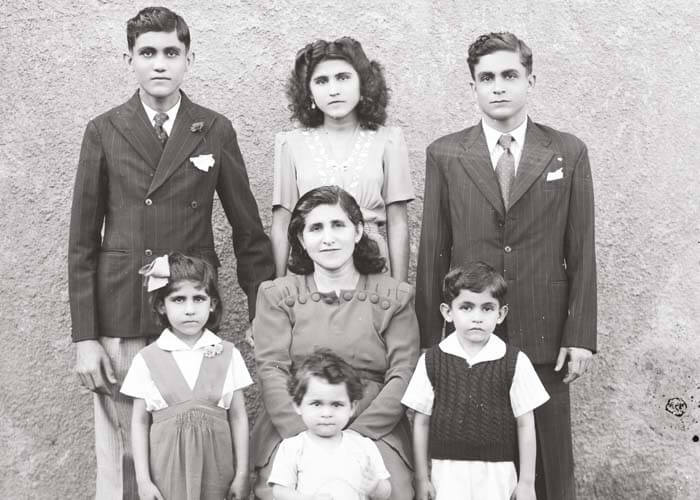 As we talk a customer comes in to get their passport picture taken. “That’s mostly what we do now,” she states, “Passport pictures, and sometimes the schools want some pictures taken if they are having a big event.” Though the grandeur of the daily activities of the studio have since dissipated over the years, Tamakloe has big plans and hopes to construct a second floor and establish a permanent gallery exhibition space. “I’m determined to show Ghanaians what is in here. People can also come identify some prominent people and relatives in these
very old photographs, as well as places and festivals,” she says. “Maybe we’ll be able to tell a story.”

A story, in part, of a city that began on the shores of this small town. All these years later, through all the changes, pushes and pullings, James Town is still bursting with life, a different variety to that of its Gold Coast heyday, but buzzing with a zeal nevertheless. Children play rings throughout the neighbourhood, community gatherings spill out onto the streets. Ga-Mashie festivals are world renowned, drawing in crowds from across the city – and often from across seas – to witness history and tradition manifest in a modern setting.

“I’m proud to tell people I’m from James Town and they say are you sure,” she chuckles, “and I say ok, let me tell you the story.”

Billie A. McTernan is a writer and editor covering the arts, culture and political affairs across Africa, with a particular focus on West Africa.