Ten artists to look out for at 1:54 Contemporary African Art Fair 2020, London

Suzette Bell-Roberts highlights ten artists to look out for at 1:54 Contemporary African Art Fair, London. These artists are represented by galleries participating in the fair which opens to the public on Friday and runs until Sunday at Somerset House in London. 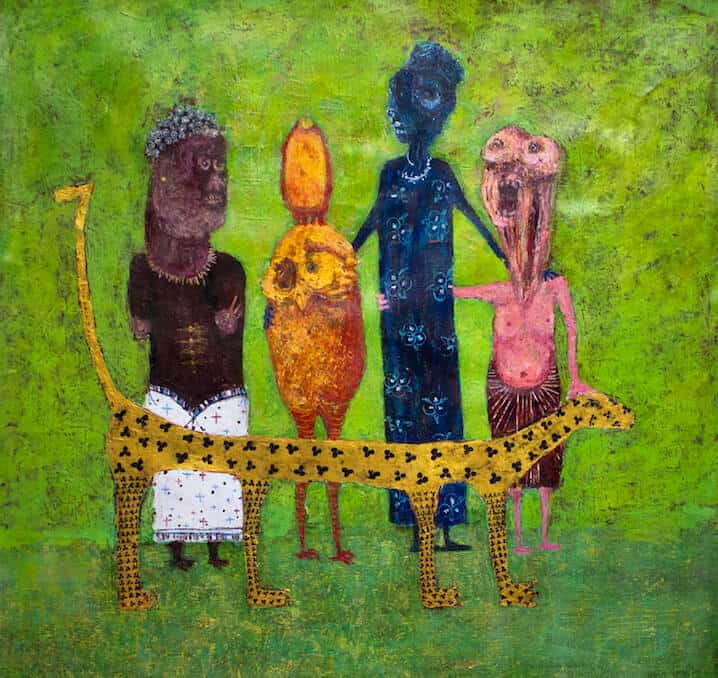 Doaa Fakher was born in Egypt in 1992. Having lived through the political unrest and instability that unravelled in post-2011 Egypt, her work is a glimpse into the mind of Egyptian Gen Z.

Fakher gleans most of her inspiration from nature, her aethereal creatures directly referenced from trees with trunk-like features to which she adds human characteristics. Her work also distinguishes itself by its choice of colours, where she adds an abrupt contrast between the foreground and background to highlight and present her subjects vividly. At the same time, she manages to contain an extensive amount of detail, allowing the viewer to appreciate the rawness in her aesthetic.
She has participated in many local exhibitions, notably her participation in the Youth Salon at The Palace of Arts, Cairo Opera House (2016 and 2017), the 10th Luxor International Painting Symposium and Dai Arab Youth Festival 2018 at Dai Gallery, Cairo. That same year, she held her solo exhibition at Townhouse Gallery, also Cairo. Fakher has also received many awards, including the 28th Youth Salon prize in painting, the 10th International Painting Symposium participation award in 2017 as well as the Salah Taher Award in 2018. Her work is part of The Museum of Modern Art collection at the Cairo Opera House. 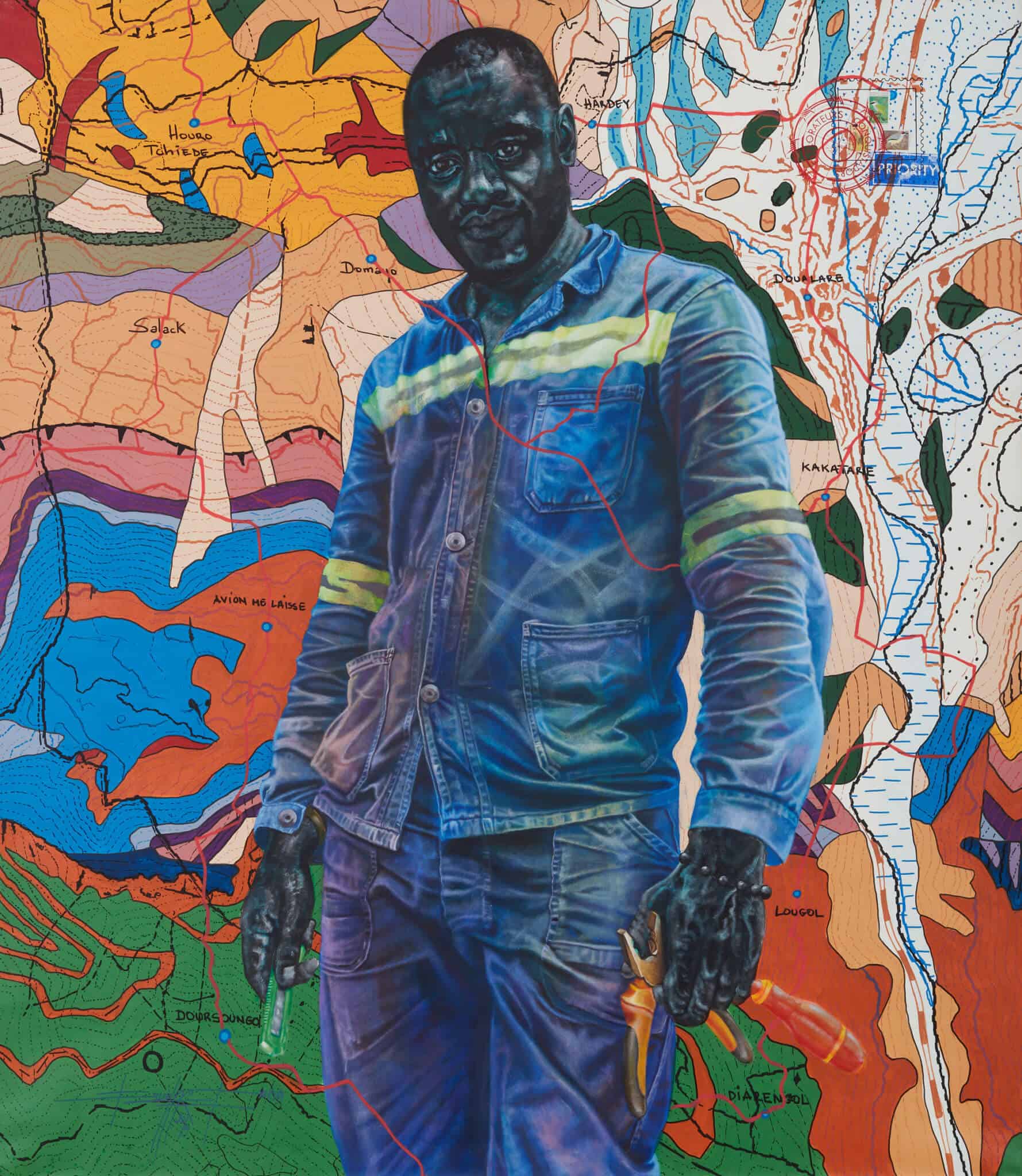 Born 1989 in Douala, Cameroon where he lives and works, Jean David Nkot addresses themes surrounding trans-African migration. His works combine detailed portraits with layers of complex cartographic information. As stated by Floréal Duran, “Jean-David Nkot draws up a sensual, realistic and wandering mapping of all these human beings led to the unknown by the dramatic situations in their native lands. He draws on the memory of uprooted people to build a powerful work, filled with emotion and not without poetry for paying tribute to them and testifying. By putting a face on all these exiled persons, he restores their dignity and reminds us that the world history has been made of exiles, of migrations, of tragedies, of sufferings but also of hope. In doing so, his painting carries within itself some questionings about our societies, about their abilities to resolve conflicts, to face environmental and economic challenges.

This artistic commitment gives rise to striking paintings that place humanity at the heart of his aesthetic choices. Nkot’s work was recently included in an exhibition curated by Simon Njami at the National Museum of Yaoundé, Cameroon.

Born Nigeria in 1981, Niyi Olagunju’s contemporary appropriation of traditional African sculptures continues his exploration of global trade and, in his words: ‘the absolute commodification of everything’. The sculptures, usually exhibited alongside preparatory sketches, are bisected vertically and have their internal surfaces primed and coated in metals mined from the region from which they are originally sourced. The project questions the value-system driving the continuing growth in the sale of traditional African artefacts, which although originally made and used for specific long-standing traditional functions, are now ultimately valued according to their provenance and rarity. Olagunju’s use of precious and semiprecious metals lends consideration to the complex relationships that emerge from the exploitation of natural resources on the African continent, and its subsequent effects on communities and their cultural legacies.

A practising studio artist, Olagunju’s work has exhibitions globally. His works reside in several private collections Africa, Europe & America. Recently Olagunju’s sculptures were shown as part of Get Up, Stand Up Now, Somerset House, London (2019); and KUBATANA, Vestfossen Kunstlabratorium, Oslo (2019). His work has recently been acquired at TEFAF Maastricht 2020 by the House of the European History in Brussel, Belgium. 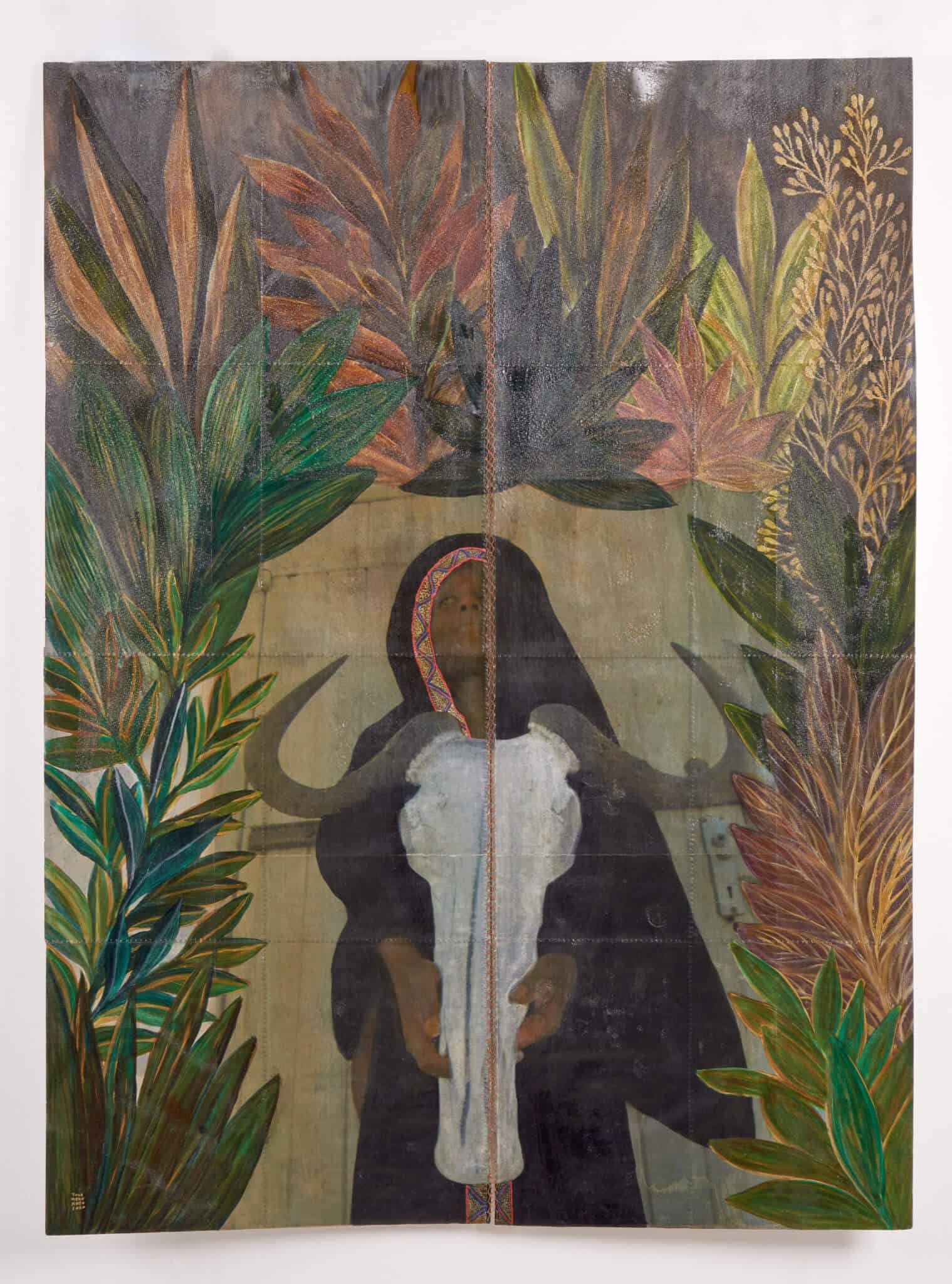 Born 1982 in Kwanza-Sul, Angola, Tuli Mekondjo lives and works in Windhoek, Namibia. Exploring history and identity politics through the lens of those who lived in exile during Namibia’s independence war, Tuli Mekondjo works with layered, textured mixed media (embroidery, collage, paint, resin and mahangu millet grain – a Namibian food staple) and extends this into performance. Drawing on photographic archives and histories of change, loss and submission – particularly when it comes to women – she stitches between past and present. Sensitive botanical vines pay homage to her forebears, fertility and continuity, whilst adorned figures comment on the gendered struggle, intergenerational trauma and displacement, bearing quiet grief and a quest for truth.

Initially mentored by the NJE Collective, since 2018 Mekondjo has shown at exhibitions and fairs in Windhoek, Cape Town, Johannesburg, Paris and London. Her most recent exhibition, The Borders of Memory, took place at Guns & Rain in April 2020.

This is Not a White Cube – Angola 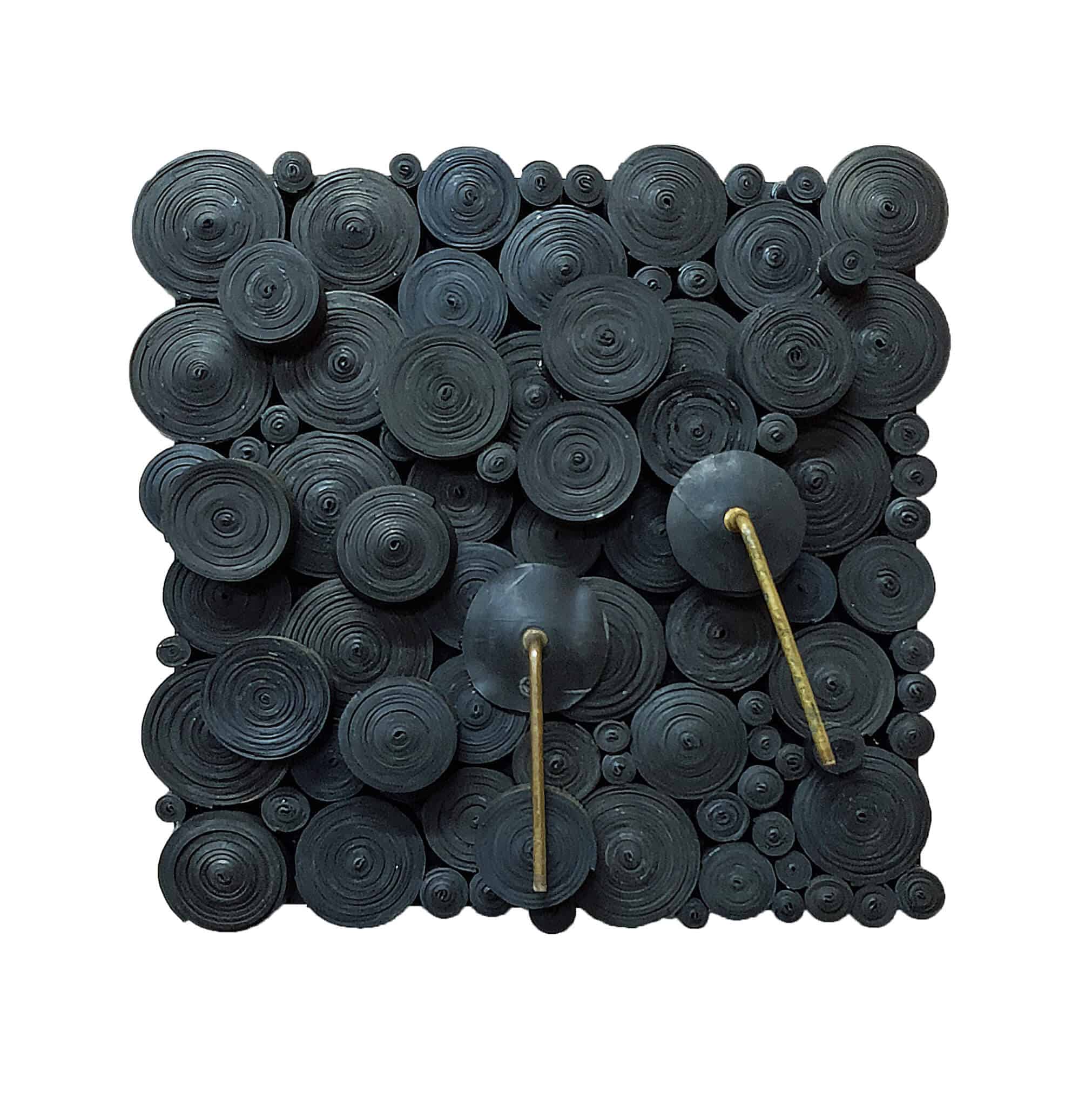 Patrick Bongoy, Fragments, 2019, Recycled rubber on wooden board, 45 x 45 cm. Courtesy This is Not a White Cube

Patrick Bongoy explores themes of migration, displacement, and the enormous human cost involved in the struggle for natural resources. Bongoy produces his works from recycled rubber strips, evoking dark narratives. Although resident in South Africa, the artist’s work continually refers to his hometown of Kinshasa and explores the broad themes of alienation through the loss of homeland, as well as migration and the resulting effects on identity. In particular, his work examines the specific aspects of dehumanisation that occur when whole peoples and communities are plagued by toxic historical narratives, socio-political violations, and rapidly degrading physical environments. Bongoy’s work has been exhibited globally. 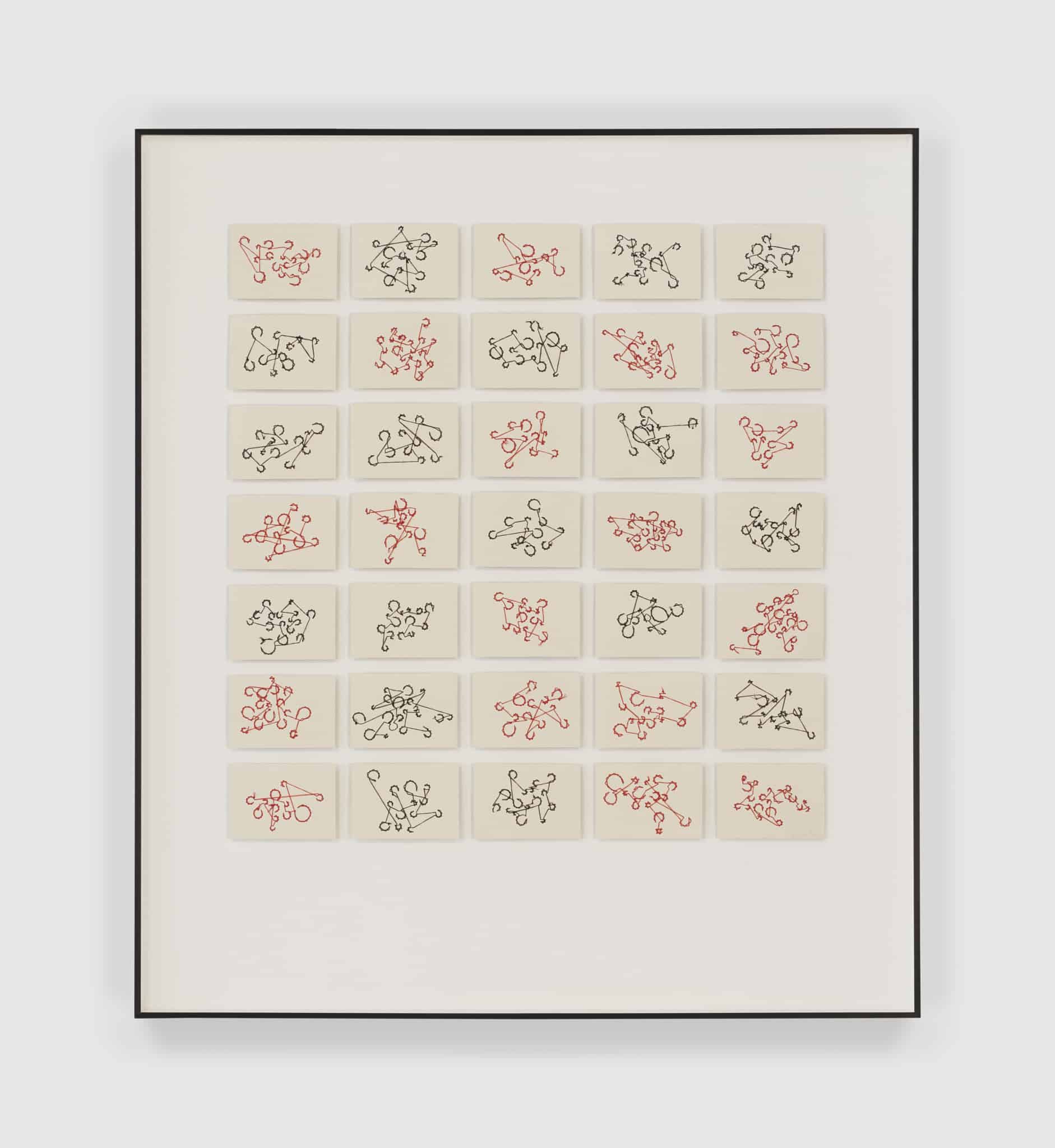 Born 1990 in Soweto, Johannesburg where she lives and works, DuduBloom creates work that explores her anxieties and identity as a young African woman. Duduzile (DuduBloom) More’s practise is experimental, using printmaking, photographs, and mixed media to produce marks that reflect her angst. More graduated from Artist Proof Studio (APS), Johannesburg, in 2018 and completed her 4th year in Professional Practice a year later. She has participated in various art competitions, and her work has been shown at several group exhibitions and art fairs including the FNB Joburg Art Fair. In 2018, she was selected as one of two APS women artists to do an artist residency in Italy through the APS and the Italian Embassy. DuduBloom recently participated in the RMB Talent Unlocked Programme as well as a one-month Co-Create Residency with Cheriese Dilrajh, hosted by The Project Space, Johannesburg. She was the winner of the 2019 Cassirer Welz Award, a 10-week residency hosted by The Bag Factory Artist Studios and Strauss & Co. The body of work created during the residency culminated in a solo exhibition in February 2020. 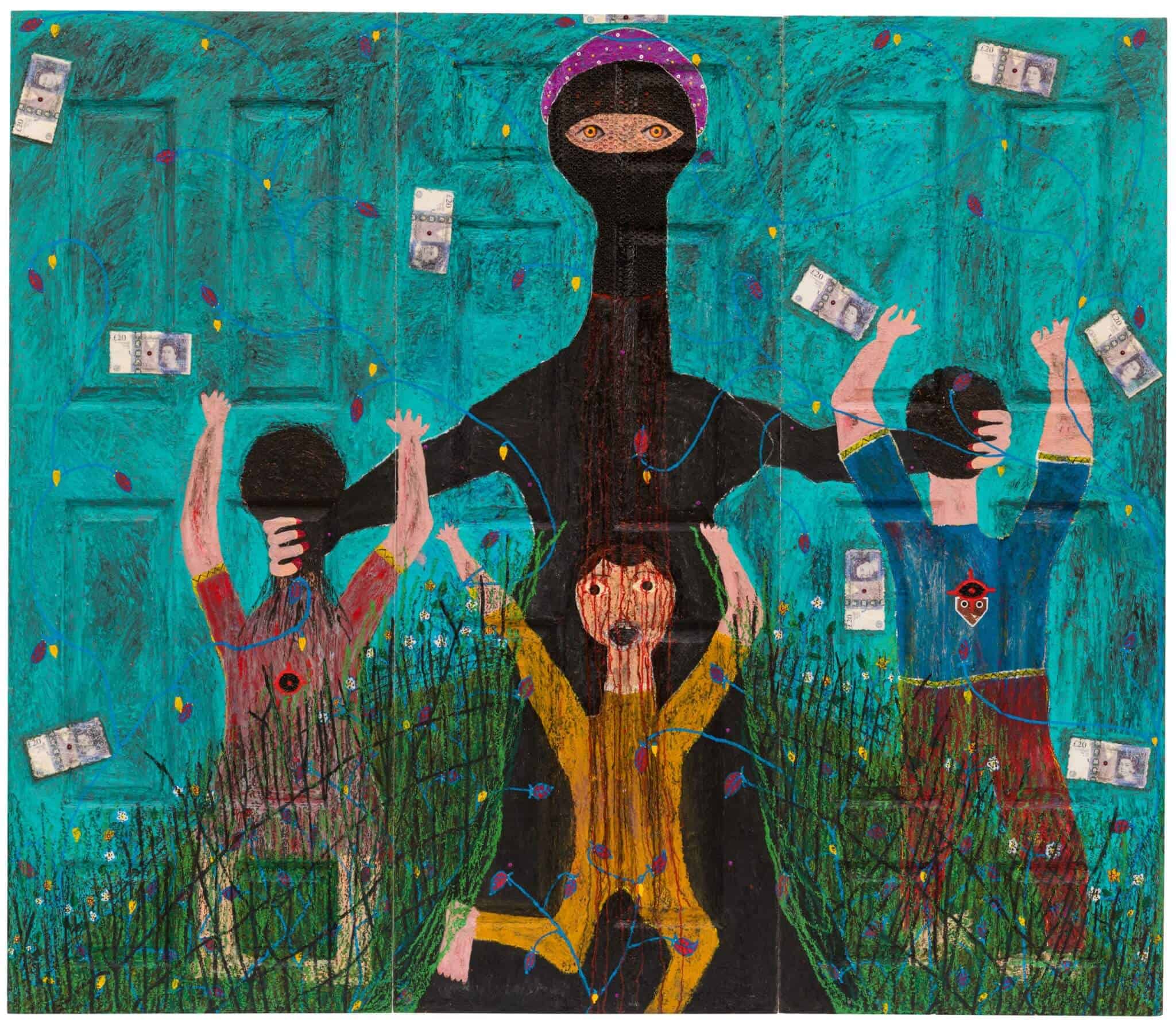 Born in 1979 in Kumba, Cameroon, Adjani Okpu-Egbe lives and works in London, UK. Using a crude and expressive language that incorporates autobiographical content, Okpu-Egbe’s paintings unfold a wide range of complex themes. Drawing from many fields and political movements such as archaeology, feminism, African history and Pan-Africanism, that are all present within Southern Cameroons’ Ambazonian movement, Okpu-Egbe comments on the global social justice system.

Okpu-Egbe’s most noteworthy exhibitions include, Regarding Africa: Contemporary Art and Afro-Futurism curated by Ruth Direktor at Tel Aviv Museum of Art, Israel in 2016 and The Underdog, a solo presentation at the 2014 edition of the 1-54 Contemporary African Art Fair, London. In 2012, Okpu-Egbe was amongst the artists commissioned nationwide by the BBC to interpret the Queen’s Thames Diamond Jubilee Pageant, making him the first African artist to partake in such an event officially. 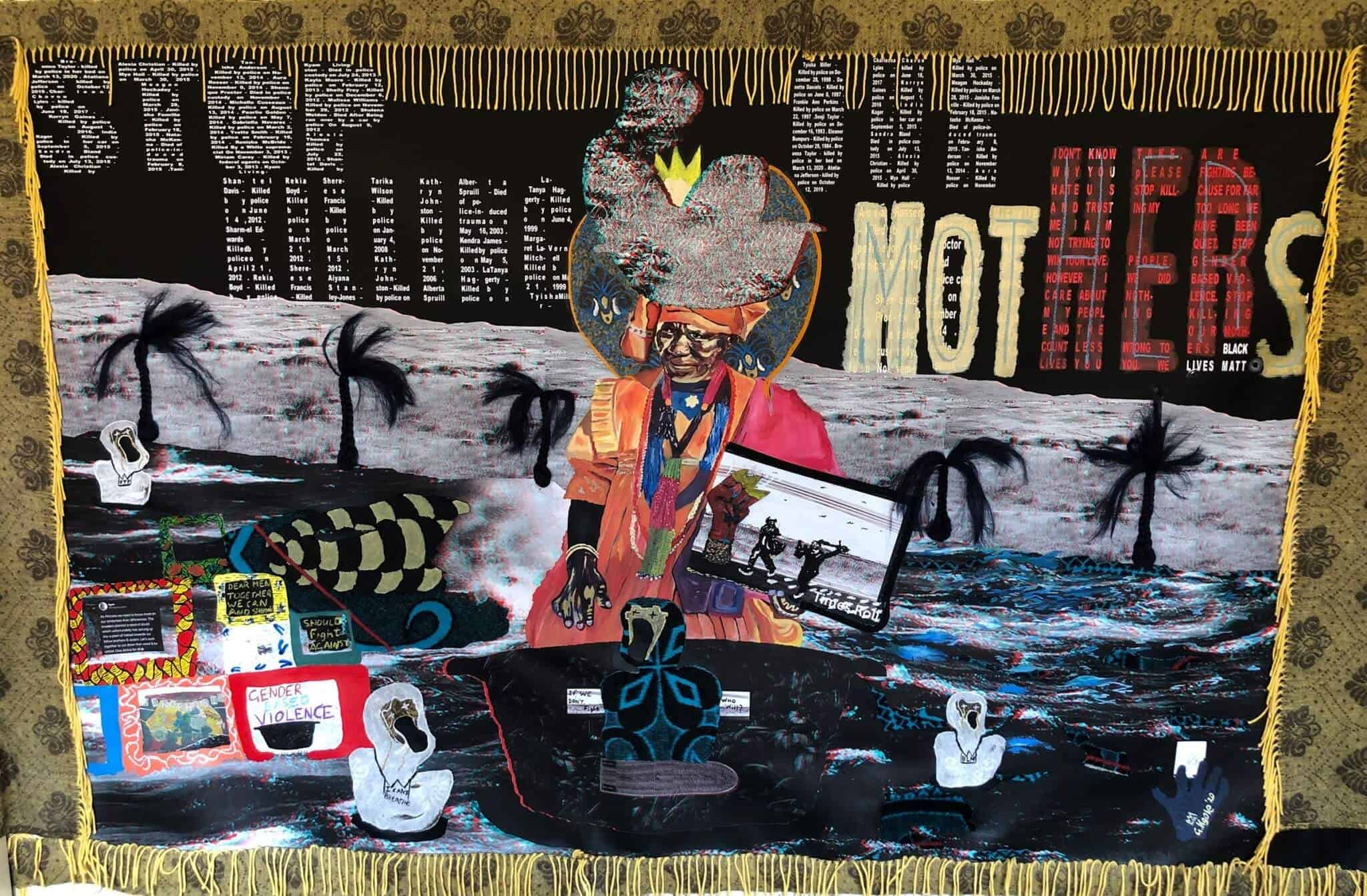 Founded in 1992 by Rahman Akar, Signature African Art specialises in both contemporary and historical African art with spaces in Lagos and London. Alongside two exhibitions of the same title, one in their London space and the other in Los Angeles, the gallery presents SayMy Name at 1-54, a selection of works curated by Khalil Akar and presented by Ava DuVernay. Say My Name resonates with the Black Lives Matter movement through new works which celebrate influential figures and moments in Black history in the UK and the USA. Artists presented include Moufouli Bello (Benin), Dandelion Eghosa (Nigeria), Giggs Kgole (South Africa), Djakou Nathalie (Cameroon), Demola Ogunajo (Nigeria), Ayanfe Olarinde (Nigeria) and Dennis Osakue (Nigeria). Signature African Art will donate 40% of the proceeds of Say My Name to Ava DuVernay’s Law Enforcement Accountability Project (LEAP). LEAP is a fund focused on telling stories of police abuse and violence through various narrative art forms and commissions projects across multiple disciplines including film, literature, poetry, theatre, dance, fine art and music. 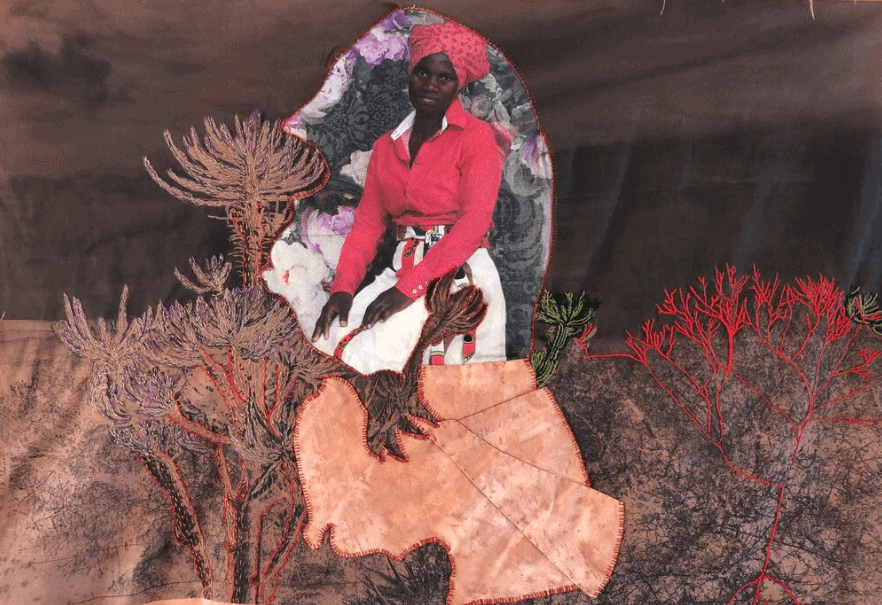 Pippa Hetherington, born in 1971, is a South African photographer who has been working as an independent photojournalist with a human rights focus.

‘Cuttings 1820 – 2020’ is constructed around themes of family, cultural memory, displacement and loss, exploring the difficulty of disentangling our shared histories. Textiles, clothing and photographic portraiture are placed in conversation with each other, in the process forging new identities and configurations. Pivoting on the relationship between female descendants of the Eastern Cape Xhosa nation and the 1820 British Settlers in South Africa, this collaborative exhibition with the Keiskamma Art Project incorporates dressmaking, embroidery, assemblage, video and photography. In the process, it also connects us to the feminine, and particularly to the strong female identities so often neglected in historical storytelling.  The sensuous fabrics create a tapestry of new relationships, bringing us closer to what we have lost, but also to what can be created anew, binding us simultaneously to the past, present and unfolding future of our country. 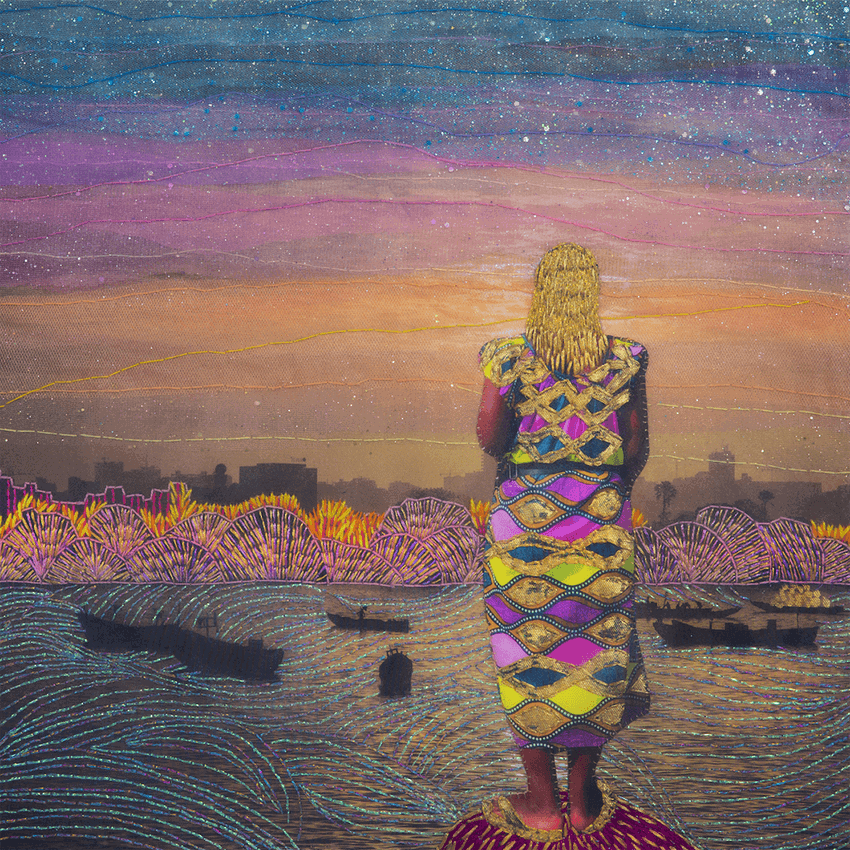 Born 1974 in Abidjan, Côte d’Ivoire where she lives and works, Joana Choumali works primarily with conceptual portraiture, mixed media and documentary forms. She uses her work as a means to explore the intricate identities of those around her. With a thematic focus on the African continent, her work aims to disrupt erroneous preconceptions of a homogenous, continent-wide identity. Choumali is also concerned with issues of gender, and the supposed binary between tradition and modernity. In her series Ça va aller.., she expresses the trauma and psychological suffering endured by the inhabitants of Bassam after the terrorist attacks in March 2016.