in News Articles 2013
Share on facebook
Share on twitter
Share on email
Share on whatsapp
We have had an overwhelming response to the call for applications for THAT ART FAIR 2016, receiving over 165 applications from artists and galleries from 21 countries, including Ghana; Mali; Senegal; Brazil; Ethiopia; Egypt; Cote d’Ivoire; Kenya; South Africa; Namibia; Angola; Mauritius and as far afield as Canada, Germany and Dubai! Have a look at the full list of confirmed participants for this year’s fair – now only four weeks away! 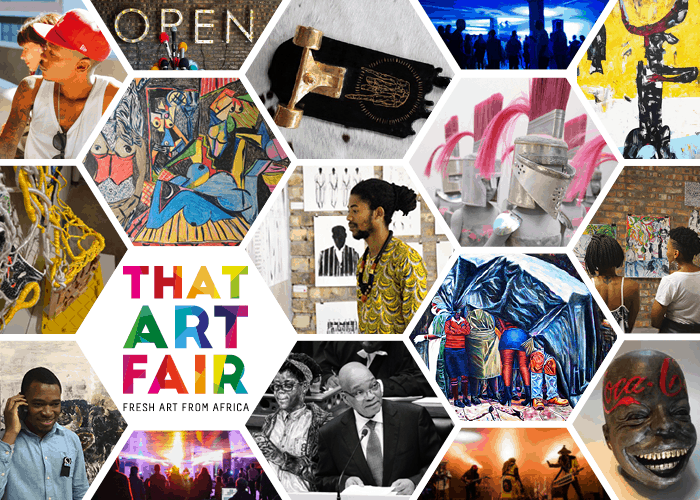 THAT ART FAIR is an inspired, curated art fair event initiated by ART AFRICA magazine with a specific focus on emerging and unrepresented contemporary artists from Africa and the diaspora.

Now in its second year, THAT ART FAIR continues to address the specific needs of artists living and working on the African continent and further afield by providing a curated platform where they can showcase their work in a relaxed but professional environment. THAT ART FAIR specifically encourages an open, inviting and friendly environment where a new generation of art audience (and ultimately collectors) can meet with the artists directly and be introduced to their work.

While artists without representation from a gallery or an established career wouldn’t normally be able to benefit from this professional stage, we have adapted the traditional model of the ‘art fair’ to offer unrepresented and emerging artists the same opportunity as their more well-known peers; providing them with the necessary resources to help them achieve recognition and success.

Taking place in a much larger space at The Palms Centre in Woodstock, Cape Town, THAT ART FAIR 2016 has received over 165 applications from artists and galleries from 21 countries, including Ghana; Mali; Senegal; Brazil; Ethiopia; Egypt; Cote d’Ivoire; Kenya; South Africa; Namibia; Angola; Mauritius and as far afield as Canada, Germany and Dubai!

de Medeiros works between Cotonou (Benin) and Paris (France). He will present work from his recent Paris exhibition entitled ‘All Things Magic’ and his video piece Kaleta/Kaleta will be a feature at the VIP preview evening and on THAT FILM FOCUS’ programme.

Our confirmed artists for 2016 are as follows: