That Feverish Leap into the Fierceness of Life

A glimpse into the modernist art of five artist groups in five Arab cities across five decades, at Art Dubai Modern 2018

In 2014 under the directorship of Antonia Carver, Art Dubai launched the inaugural Modern section at the fair. Devoted to Middle Eastern and South Asian art produced from the 1950s-1980s each of the 11 booths presented solo or two person shows and featured some of the best known names in the region. Fast forward four years and the Modern section has significantly evolved – in no small part to the enthusiasm of the new director Myrna Ayad who is passionate about raising awareness on the richness of art history from the wider region. Thanks to her leadership, Art Dubai Modern now hosts an annual symposium to stimulate education on the subject and an increased focus on curation, both of which allow visitors and potential collectors to delve deeper into the disparate modernist history of the region and, in turn, appreciate the roots of its vibrant contemporary practices. 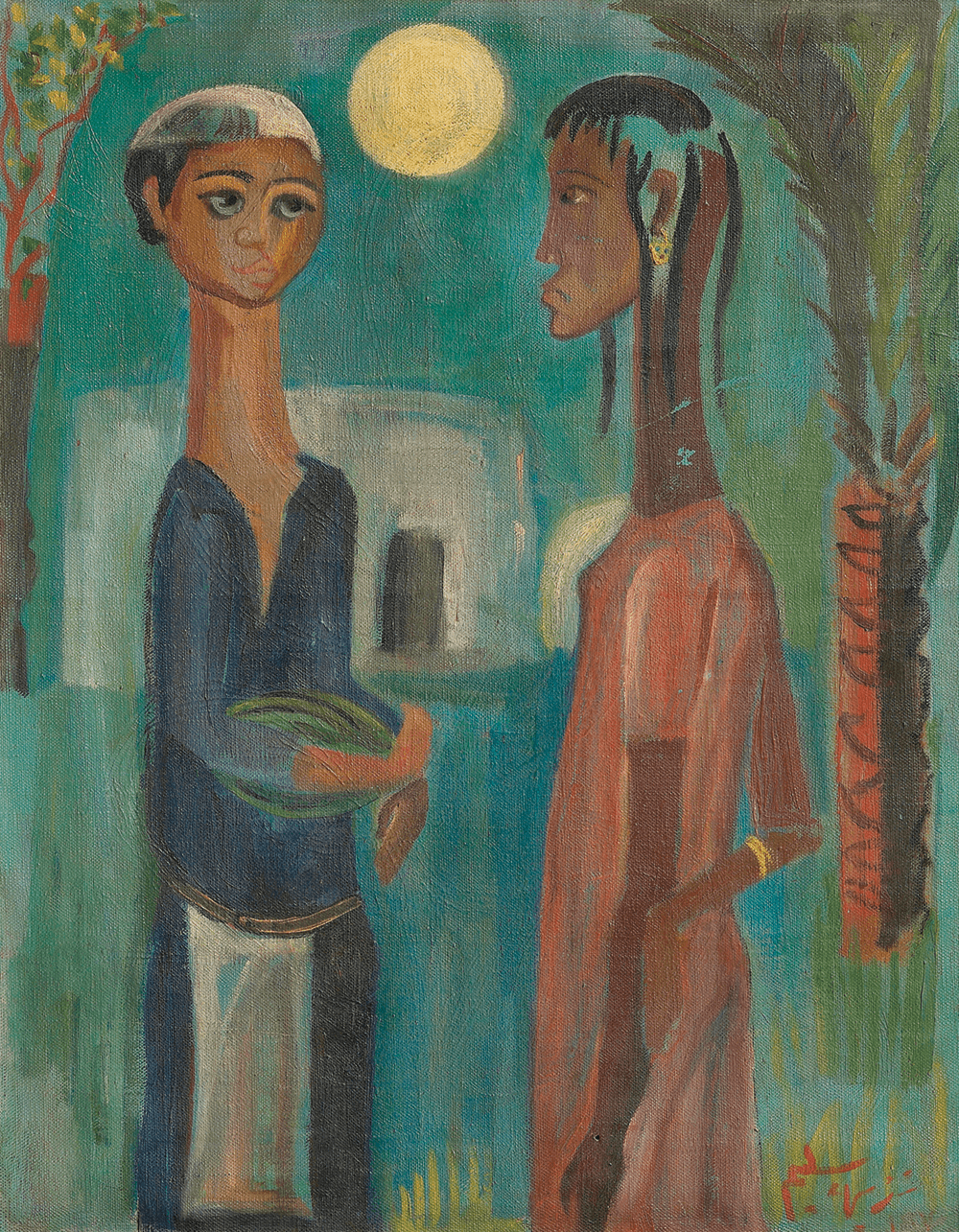 This year, the commercial hall was furnished with a vital and thought-provoking adjunct. A non-selling exhibition showcasing key pieces from across five distinct geographies and five decades (1940s-1980s). ‘That Feverish Leap into the Fierceness of Life’ curated by Sam Bardaouil and Till Fellrath presented more than 50 artworks of different modernist art movements across the Arab world. It focused on particular schools in Casablanca, Cairo, Riyadh, Khartoum, and Baghdad and aimed to reveal the diversity of the intellectual and formal approaches by these artistic groups.

Hosting such an exhibition encouraged discourse away from what the curators write about in their introductory essay: the assumption that despite their fundamental differences most theories depict modernism in the Arab world as “a monolithic phenomenon, which essentialises the contradictions, antagonisms, challenges and accomplishments of the various expressions of modernism throughout a long century of rigorous negotiation and creation.”

By juxtaposing the five schools, these essentially disparate influences are highlighted. The early surrealists working out of Cairo are quite distinct from the abstracted aesthetics of the Casablanca school and different again from the artists focused on their ancestral heritage in Khartoum. The Baghdad Group – after whose manifesto this exhibition was named – was perhaps the most robust inclusion. Featuring heavyweights such as Jewad Selim and Shakir Hassan Al Said, this group drew heavily from their links to the past and cultural tradition as well as dedicating themselves in full force to forging a new national identity out. When juxtaposed with artists from Saudi Arabia, which encountered its own form of modernism much later on, the redundancy of trying to sweep a broad brush over Arab modernists is made abundantly clear.

These were different artists coming together from different geographies searching for a language that was at once globally informed but echoed their own specific social and political contexts,” said Bardaouil at the opening. “They were also searching for a style that reflected their aesthetic interests and one they could call their own.

“These were different artists coming together from different geographies searching for a language that was at once globally informed but echoed their own specific social and political contexts,” said Bardaouil at the opening. “They were also searching for a style that reflected their aesthetic interests and one they could call their own.” 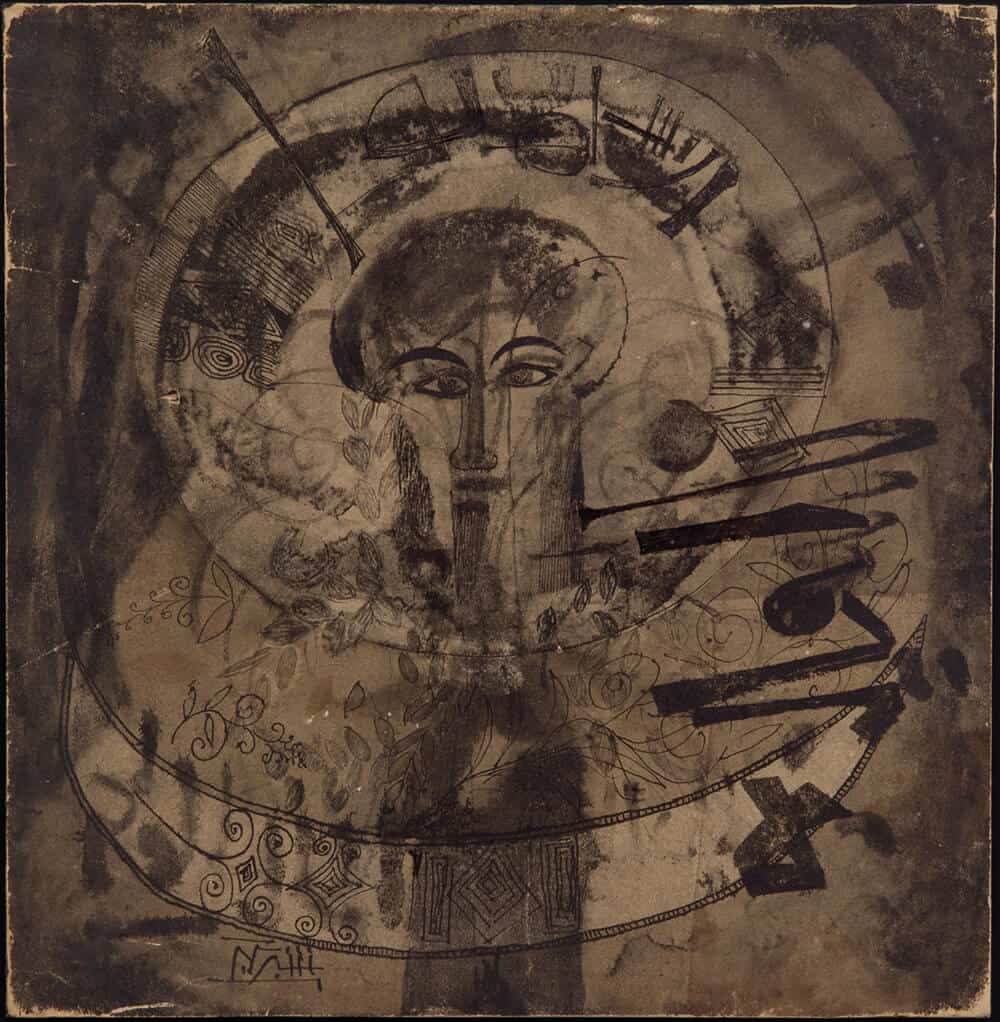 Small but neatly packed into the softly carpeted halls, the exhibition housed museum-quality works that yielded veritable treasures to the patient viewer. Crucially, the context of hosting the event inside an art fair driven by the insatiable need to present the cutting edge of contemporary art, gave the exhibition new significance. Ahmed Mater – the director of the Misk Institute, who are sponsors of the show and partners with Art Dubai – said the entire gathering of work allowed for an invigorated interpretation of the past, which could directly affect future generations of artists.

“It is thanks to the vision of all those who have made this exhibition a reality, that we have this exceptional opportunity to reflect on our past, as we contemplate the ways the future might be newly imagined and configured, shaping spaces for artist-led thinking.”

Artists who came together in the Sudanese capital of Khartoum in the 1960s and 70s were characterised by their use of primitive and Islamic imagery. Like many other artists, they relied on calligraphic Arabic script, which they abstracted. However, other hallmarks included influences from local literature and drama as well as Sudanese craft. Dr Salah Hassan Abdallah writes that the theoretical roots of the Khartoum School were founded in the mid 1960s in Ibadan, Nigeria, at the Mbari club – an experimental arts and drama workshop founded by a European couple. He calls this period “one of the most creative eras of contemporary African art history.”

A leading figure of this group is Ibrahim El Salahi who is now known as one of the most significant artists in both African and Arab Modernism. Salahi spent a good period of time living and studying outside of Sudan and when he returned, he fully appreciated the beauty of the culture and began to integrate it into his art, leading the way for those who followed.

As such, heritage became a focal point for Sudanese artists such as Osman Waqialla and Ahmed Mohamed Shibrain.

Although it was formed in an environment where many other art groups were already active, the Contemporary Art Group embraced tradition, symbolism and myth as well as the several strands of artistic trend and came together to truly represent an Egyptian identity.

The artists of the Casablanca school were not just united by aesthetic and style, they were also all loosely associated with the art faculty at the Casablanca Ecole Des Beaux Arts. The de facto leader of the group, Farid Belkahia who was also the director of the faculty from 1962-1974 had a great influence on the rest of the group. In the early 1960s, Belkahia began working primarily with large-scale hammered copper, and later with leather. He often used geometric shapes such as triangles, squares and circles, which recall corporal figures, the Amazigh alphabet as well as his influences of European modernism.

Other artists in the group include Mohammed Melehi and Mohamed Chebaa who, like Belkahia, were working with shapes rooted in Moroccan culture but working them into crisp and often optical abstractions rendered in bright colours, reminiscent of North African culture. Much of this aesthetic was also influenced by Morocco’s drive for independence, which was successful in 1956 and there was a consensus to move away from influences of the West and to allow art to play a decisive role in the new national culture.

Some of the most instantly recognisable works in the whole exhibition exist in this section: Melehi’s graphic-like waves which are linked to the seaside town he grew up in appear contemporary even in the 21st century and Chebaa’s hard-edged formalist abstraction also calls to mind calligraphic influences often used by artists today. 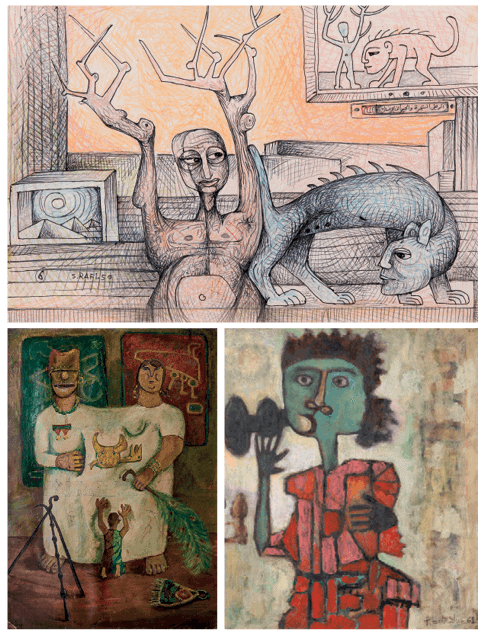 The Contemporary Art Group was an artist collective founded in 1946 that emphasised the relationship of art to society and popular culture and adapted modern forms and technique.

The driving force of this group, which Sam Bardaouil argues is “one of the most significant art groups in the history of modern art in Egypt”, was to form a new language outside of the formal structure of institutional artistic language and to reject western academic approaches to art making. Although it was formed in an environment where many other art groups were already active, the Contemporary Art Group embraced tradition, symbolism and myth as well as the several strands of artistic trend that came together to truly represent an Egyptian identity. In that vein, it entwined with the push for nation building in the post-colonial era that swept across the region.

There are many paintings in this section of the exhibition from Abdul Hadi El Gazzar, who was part of the third generation of artists to join the group. Although he began his practice with an early interest in religious symbolism and folklore, he later shifted to depicting the stark poverty of Cairo’s working class and also focused on technological advances and nationalism. It also includes the work of Samir Rafi, who depicted daily life infused with symbolism and surrealism. 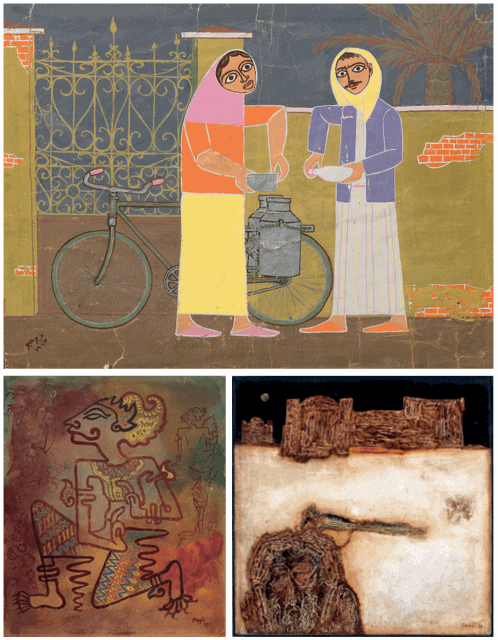 In 1951, Jewad Selim, a major persona in Iraqi modernism, penned the Manifesto of the Baghdad Group for Modern Art. In it, he wrote: “If we fail to fulfil ourselves through art, as through all other realms of thought, we won’t be able to make that feverish leap into the fierceness of life.” The passion and emotion of the words shows just how strongly artists felt at that time about expressing themselves effectively. As with other geographic areas, the formation of this group and their ensuing exhibitions and manifestos was inextricably linked to the new post-colonial national identity – but Selim directed his efforts into explaining the role of the artist in maintaining culture and serving humanity in a global context. Nada Shabout writes that Selim “questioned the status of Iraqi artists in Baghdad and located modern art in the margins… He vehemently spoke against the dominant mainstream preference of academic style.”

Shakir Hassan Al Said was a key ally and contemporary of Selim and his work is also exhibited here. He incorporated Sufist influence prompting a spiritual search through abstract art. He experimented with the Arabic script but was interested in the relationship between time and space, visual and non-visual so that his paintings exhibit traces of cubist abstraction but also access a space beyond two dimensions revealing his philosophical leanings.

If we fail to fulfil ourselves through art, as through all other realms of thought, we won’t be able to make that feverish leap into the fierceness of life.

When Dar Al Funoon was established in Riyadh in the 1980s, it was an incubator for all emerging and young artists at the time – being the only such hub that provided the space and resources for artists in Saudi Arabia. The principal founder of this group, Mohammed Al Saleem opened the house as a romantic idea to build a home for all artists (male and female) to gather. This idea was crucial to the development of art across the nation and despite the failure and financial burden of his next venture to open a gallery, he made important steps for the entire Saudi art movement. Although these artists exhibited abroad, and knew about international artists, very little is now known of this group.

There are several key works on show by Abdulrahman Solaiman an artist from Dammam who was influenced by European modernism but attempted to infuse such dialogue with his region’s spirit. 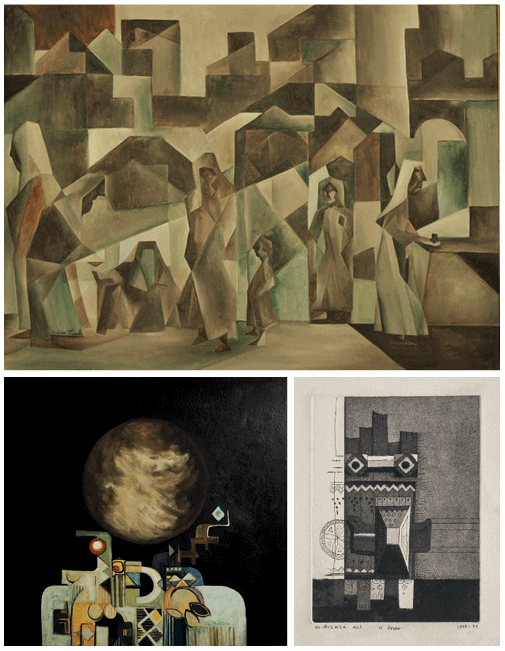 Anna Seaman is an arts and culture writer and journalist based in the Middle East, adding a voice to the conversation around contemporary art.