in Frontpage
Share on facebook
Share on twitter
Share on email
Share on whatsapp
New projects and actors are arising and shaping the actual moment in the Luanda art scene: Art critic and curator Suzana Sousa gives us an exclusive insight.
by Suzana Sousa
For the last ten years, the Luanda Triennial, the biggest international art event in the Angolan capital, marked the art scene in Luanda. The event, designed by Fernando Alvim, had its first edition in 2007 but for the previous five years several small events took place in order to prepare the momentum and gather support for the triennial itself. These years marked the exposure of Angolan artists to the global arts scene through conferences and residencies by artists such as Miquel Barceló and DJ Spooky, among others. At the same time, the project was being shown in the international arena creating the space for Angola to take part in the debate on African art not only through individual artists but through a national position, although Fernando Alvim was and still is an individual running a private institution. This was the context in which artists like Kiluanji Kia Henda and Yonamine entered the global scene and was also the context that maximized collecting efforts already in place. 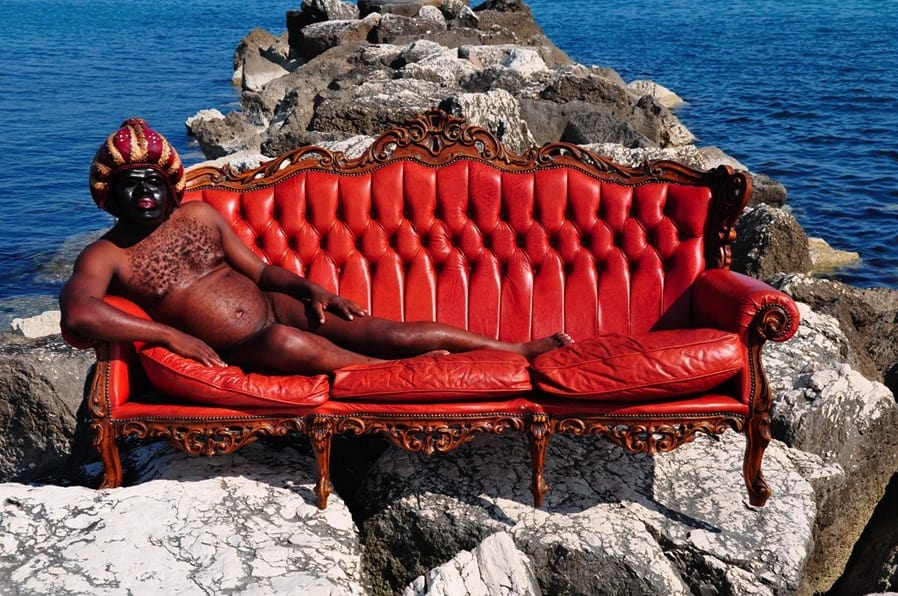 Kiluanji Kia Henda, ‘The Great Italian Nude’, 2010, © Kiluanji Kia Henda
In a scenario where there were no art museums or galleries, private and institutional collectors were the main patrons in Angola. The internationalization of Angolan art, however, brought new responsibilities to this group who kept supporting the arts but also developed a more critical view since they too were more exposed.
This private story of the Angolan art had a recent and interesting turn: the attention of the government and their possibly – one hopes – new policy will be implemented in the field, from copyright to museums and art schools. In 2012, Kiluanji Kia Henda received the National Prize for Culture, by the Ministry of Culture, for the internationalization of Angolan art. Even more recently, the Angolan Pavilion won the Golden Lion at the Venice Biennale for the Best National Participation with the Luanda: Encyclopaedic City by the artist Edson Chagas. An exhibition curated by Beyond Entropy (Paula Nascimento and Stefano Pansera). 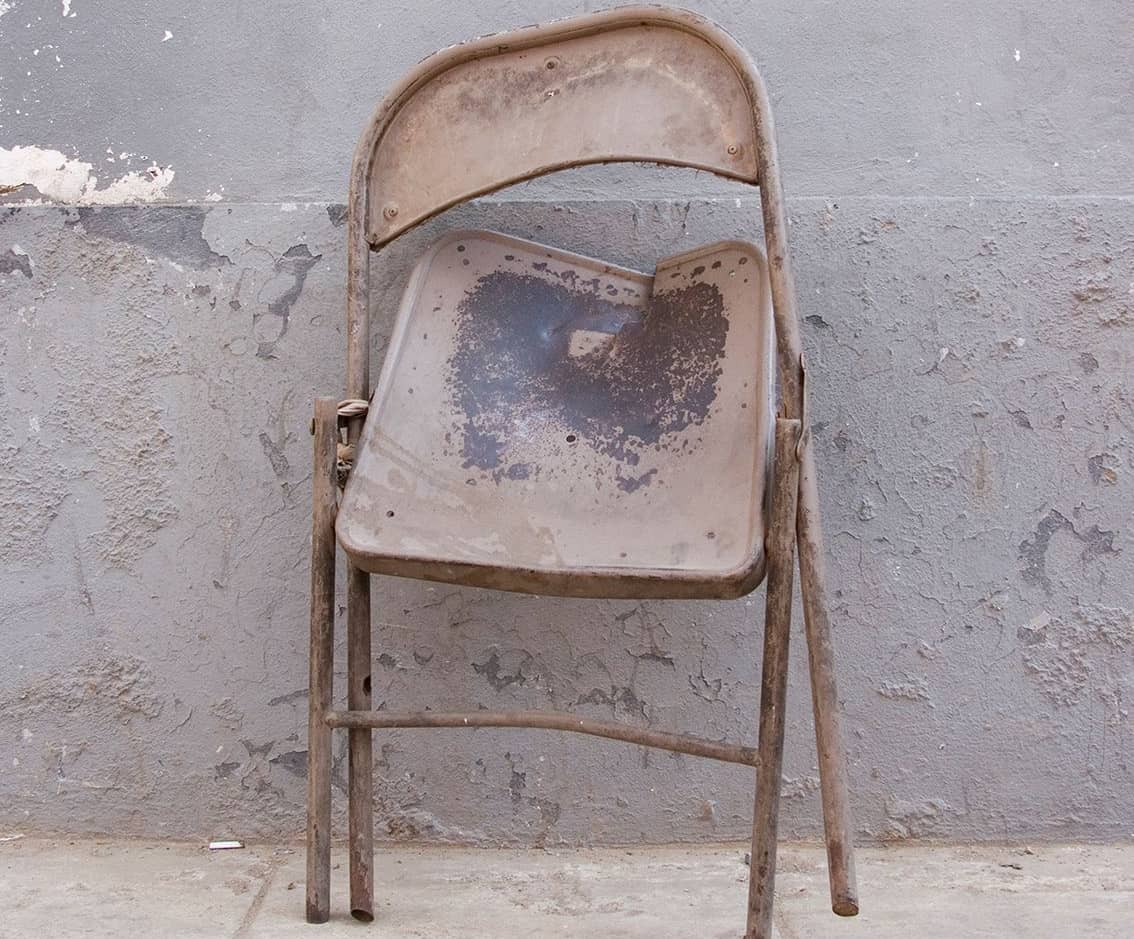 Detail from ‘Found not taken’ series, March, 2013, Luanda, Angola. © E.Chagas
The pavilion commissioned by the Angolan Ministry of Culture put in place two shows that I think reflect the changes contemporary art is going through in Angola. The national ethos suggested by the title “Angola em Movimento” of the show curated by Jorge Gumbe is being questioned by contemporary practice and the way artists see and represent themselves. There is a new generation of artists experimenting with different media who are independent from the political ideologies of Angolan recent history, artists who rather see themselves as part of a global geography, both political and artistic. 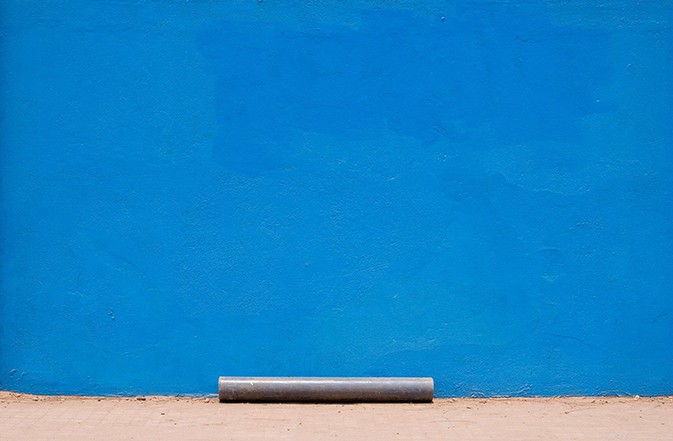 Detail from ‘Found not taken’ series, March, 2013, Luanda, Angola. © E.Chagas
New projects and actors are arising and shaping the actual moment in the Luanda art scene. Since 2012, Carlos Major has been developing a curatorial project, Vidrul Fotografia, which consists of showing four artists for a month. The last edition showed the work of Kiwla, N’Dilo Mutima, Renato Fialho, and Adiddy Love. The project has the merit of bringing new artists to the forefront while also experimenting with new places in the city, not necessarily typical exhibition rooms. That was the case in its last edition that took place at the main post office station of Luanda. And that is also the case for e.studio a cultural enterprise initiated by António Ole, RitaGT, Francisco Vidal, and Nelo Teixeira, a group of artists who developed an art space which aims to display and promote the production and discussion on arts. Institutions such as the Portuguese Cultural Centre and the Foundation for Arts and Culture, an Israeli organisation, are also spaces developing regular cultural programs with national artists and curators. 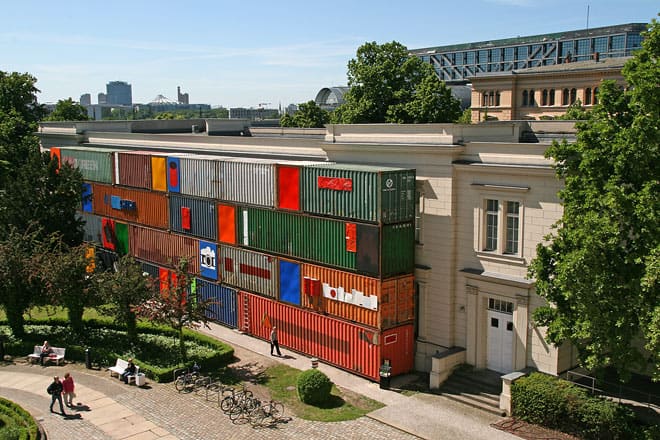 António Ole: The Entire World, 2010, Hamburger Bahnhof © Image: Haupt & Binder
Recently talking to the photographer Indira Mateta, we were questioning the visibility of Angolan female artists. The lack of formal education is most likely one of the reasons for the marginalisation of female artists, as well as the informal apprenticeship systems that tend to relegate them to a secondary role, all contributing to associating women in the arts with crafts. Marcela Costa has been trying to challenge this for several years in her atelier/art space gathering a community of art lovers and celebrating female artists. However, female artists have a hard time when it comes to being acknowledged as contemporary artists in the local scene.
The art world in Luanda is young and vibrant with a political impact that is yet to be understood, and together with subcultures such as kuduro, it stands for a new kind of politics that implicates daily life and reflects itself in everyday action. In a country that used to be silent about issues such as politics, this is an exciting change.
Suzana Sousa lives and works in Luanda as an independent curator. She is one of the curators of the next  Luanda Triennial.
http://www.contemporaryand.com

The Proof of my Existence: A conversation with Rene Rietmeyer