in ACTIVISM, CONTEMPORARY ART, DIGITAL, EVENTS, INNOVATIVE, ORGANISATION, POST COLONIAL, VISUAL CULTURE
Share on facebook
Share on twitter
Share on email
Share on whatsapp
“This is not about selling people crap they don’t need—it’s about communicating about artwork,” said artist and activist Dread Scott towards the end of a talk last Thursday on how artists should market themselves. Some 15 people had gathered at The Black Art Incubator in New York to hear the self-described revolutionary communist discuss the nitty-gritty of getting your work seen, understood, and, to some extent, sold. In the lead up to the talk, Scott had been in the headlines for his “A Man Was Lynched by Police Yesterday” flag, which attracted both support and death threats. I’d interviewed him about the piece the day before, and as I listened to him give advice to the group, I realized I had unknowingly been on the receiving end of the tips and techniques he was now championing to other artists—availability, clarity of communication, and a navigable artist website among them. 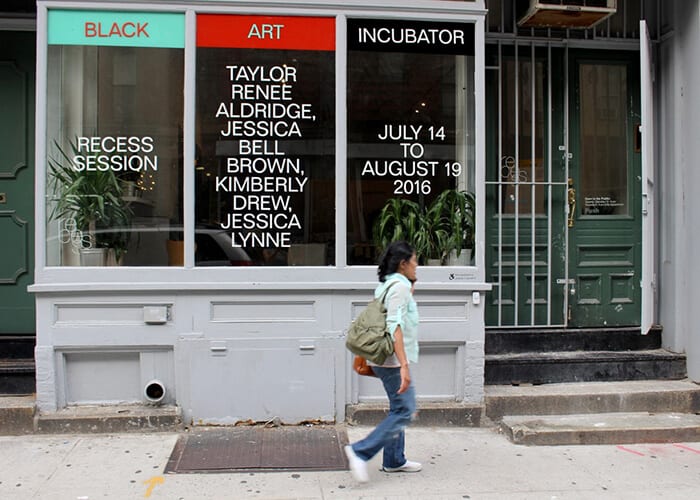 What I had chalked up to be an innate understanding of the press was actually a cultivated skill, part of Scott’s efforts to make his work accessible and get his radical political message in front of as many eyeballs as possible. Scott’s talk was a funny and straightforward guide to making it as an artist, filled with pointers like have images of your work ready in case your gallerist doesn’t; provide a clear biography; and make yourself easy to contact. More conceptually, though, he stressed, you need to decide what, as an artist, you want to do. And no one, least of all Scott, can set those goals for you. As his PowerPoint ended and the Q&A session began, the topic shifted from PR tricks to Scott’s radical politics, and thoughts on the chairman of the Revolutionary Communist Party, Bob Avakian.
This mix of free-roaming conversation and practical advice is at the heart of The Black Art Incubator, the brainchild of Taylor Renee Aldridge, Jessica Bell Brown, Kimberly Drew, and Jessica Lynne. Described as a “social sculpture,” the incubator will take shape during a 35-day “residency” at Recess‘s storefront space in SoHo, accumulating ephemera and additions to its library as time goes on. The cozy room—adorned with blackboards and plants graciously left by the previous resident, Lauren Halsey—will be the site of talks, open crits, office hours, and general hanging out during the incubator’s lifespan. “Our space is your space,” Brown said to those who gathered at the close of Scott’s lecture. 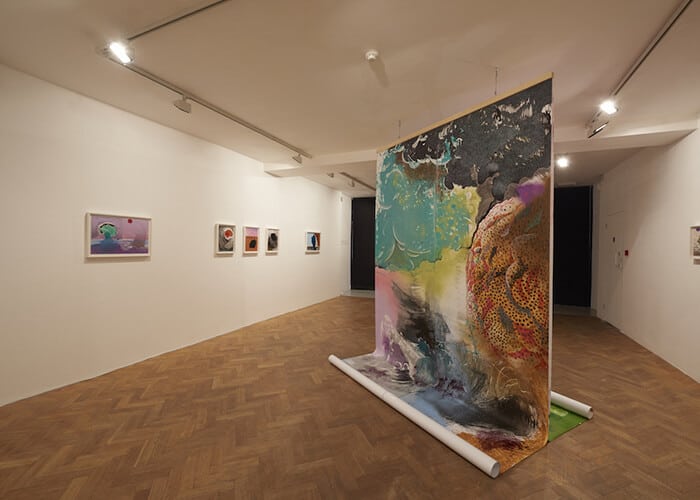 The incubator is “creating space for leisure and self care and meditation,” Lynne told me last week. It offers “more formally oriented, pointed discursive projects asking what it means to be an artist, and what it means to be a practitioner,” she explained. There is also an “Analog” component to the incubator, found online, which seeks contributions from writers, artists, activists, and more in order to explore the relationship between individual black women and broader communities (the public can also comment). Through this, the website will be a “platform for meditation on this inseparability of self and community and on the power of black women as the agents of communal possibility.”
The goal of creating a semi-informal physical and digital space where concrete ideas about art and artistry can be shared is welcome and needed, though such spaces and conversations are so often lost to the mechanical hum generated by the professional mechanisms of the art world. Much of the incubator is a self-described “intervention” in those mechanisms. Through critique, collaboration, and conversation, the incubator seeks to “provoke new understandings of the myriad sectors that comprise the contemporary art world.”
Part of that is a process of making visible the hidden aspects of the art world, unknown even to some participants. “We’re occupying this storefront at Recess and turning it into a work space; so it’s this performance of labor, but we’re actually putting a frame on the labor that goes into making works of art, making exhibitions, making professional relationships,” said Brown. “It’s calling attention to how this art world gets produced. Today we have a grant-writing workshop with Maxwell Heller, who used to be an associate at the Studio Museum.” Brown said she’d be taking notes herself.
When I visited to speak with Lynne and Brown it was a few days after the incubator’s debut event, a discussion between Halsey and Antwaun Sargent. “Most of the time thus far has been install-related,” Lynne said, “making sure the energy is good, making sure things look good, getting air bubbles out of…” she gestured behind her, to two large blackboards, adhesive squares that had been plastered to the wall. From what the pair told me, the air bubble removal was a herculean task. But so was crafting the atmosphere of the social sculpture. “Everything you see here is flexible or agile because those are values we collectively believe in; because to make this ship sail, you have to be flexible,” Brown said. “Everything is modular. So we have pedestals serving as coffee tables. The blackboards function aesthetically when they’re clear, but will be activated when talks are happening and keywords are being documented.” 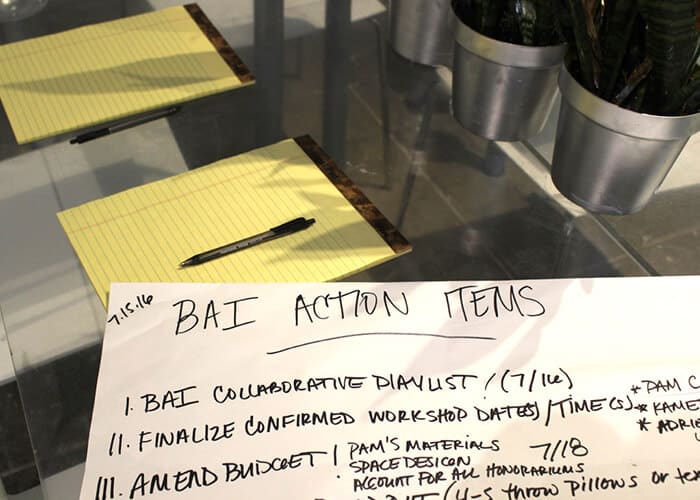 Lynne’s introduction to the incubator came at a dinner she had with Drew at the Black Swan in Bed-Stuy last year. “We’re wrapping up dinner and she’s putting on her coat and said, ‘By the way, would you be interested in doing this Recess project with me?’” Lynne said laughing. “I said, of course, let’s do it.” Brown described the collaboration between the four organizers as a “serendipitous meeting of the minds.” Lynne and Aldridge worked together on Arts.Black, while Brown and Lynne knew each other through a mutual friend.

Early conversations saw the group tackling important questions (often via Google Docs), like “How do we imbue this project with a collective spirit of cultural inheritance that we are all really proud to own, that very much matters to us? How do we hold that and ensure that other folks that may not operate from that cultural lexicon feel welcome and invited in that space?” Lynne said. “I remember feeling like ‘the black art incubator’ sounds nice, coming off the tongue, but it also feels rooted in my cultural lexicon, without being hostile to other vantage points and identities. And that was important to do.”

When they first submitted the names of those invited to be a part of The Black Art Incubator, a staff member at Recess pointed out that everyone on the list was black. The fact hadn’t occurred to the four organizers “in the same way a white person wouldn’t walk into a board room and think ‘oh, everyone here is white,’” Brown said. “To dare to think outside of one’s identity context—or to say yeah, we have Thomas Lax and Adrienne Edwards and countless other people involved and we share certain intersecting identities—to be able to take that for granted momentarily is really important collectively.” And indeed, she notes, “Black artists have always had community, have always had fellowship, have always collaborated together. So we’re not doing anything new, we’re just existing and daring to exist in a black creative world.”