To celebrate the launch of her latest book Broken Monsters (2014), local sci-fi thriller writer, Lauren Beukes joined forces with curator Jacki Lang to put on a pop-up art exhibition with a twist. Not only would artists be invited to create works on pages torn from Beukes’ book, but the proceeds raised would go directly to a charity nurturing young South Africans to develop a love of reading.

The selected charity for 2015 was Book Dash, a project that brings together creatives, writers and translators to create children’s books in marathon, twelve hour spurts. During the course of one Book Dash day, the teams create beautiful children’s books that can then be printed, translated and distributed by anyone. Their ambitious goal is to give one hundred books to every South African child before they turn five years old, particularly in their own language.

“It is now generally accepted that getting books to kids in their home-language (not just English) is really important,” says Julia Norrish of Book Dash. “It shows children that their language, their culture, and ultimately they themselves are important enough to be written about. The ‘Broken Monsters Charity Art Show’ money has given us the freedom to print significant amounts of our books in all eleven official languages. We’re currently working with partners and beneficiaries of our books to decide which translations to prioritise.”

With exhibitions in both Cape Town and Johannesburg held in November 2015, the ‘Broken Monsters Charity Art Show brought to you by Nando’s’ managed to raise over R400 000 in total through the sale of donated artworks by some of South Africa’s best established and emerging artists, including artists from the Nando’s Art Initiative like Liza Grobler. The sponsorship from Nando’s meant that all of the proceeds could go to Book Dash, and they’re now able to print over 40 000 children’s books. The artworks were sold for a reasonable R1500 each and exhibition visitors were restricted to buying one item each for the first hour and a half of the show. This made the art accessible to art lovers from across a larger demographic. For their R1500, visitors would get an original artwork and know that their purchase would go towards the printing of 150 children’s books. The established artists included the likes of Beezy Bailey, Kilmany-Jo Liversage, Georgina Gratrix, Marlise Keith, Anton Kannemeyer and Brett Murray, whose work would ordinarily go for considerably more in galleries and at auction. 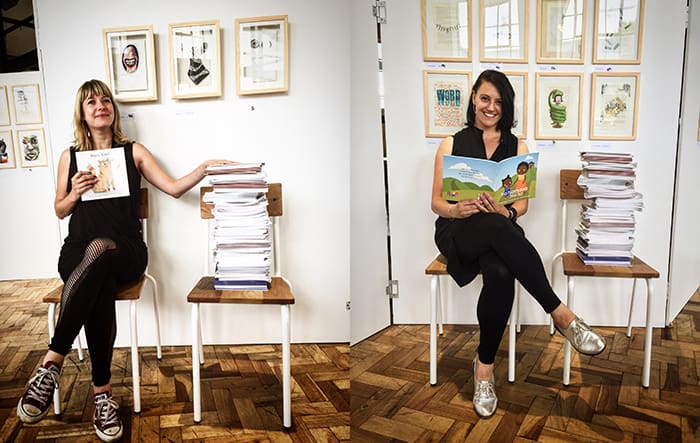 Lauren Beukes and Jacki Lang at the Nando’s Central Kitchen in Lorentzville, Johannesburg. Each artwork sold paid for the printing of 150 children’s books (as pictured). Photograph: Louise McCann. Courtesy of The Content Studio.

ART AFRICA spoke to Jacki Lang and Lauren Beukes, about the who, what and why of this stellar, charitable event. In addition, local artists, Rowan Foxcroft, Schalk van de Merwe, Christi du Toit, Liza Grobler and Lauren Fowler tell us about their experiences of the show.

ART AFRICA: ‘The Broken Monsters Charity Art Show’ is the second incarnation of ‘The Shining Girls Charity Art Show’ held in 2013 in support of Rape Crisis. Where did the idea for a show of this kind come from, and how did you make it happen?

Jacki Lang: Lauren tries to do art-based initiatives to raise funds for charity with the launch of each new book. We are old friends from many years ago and she approached me to ask me if we could collaborate when The Shining Girls came out. We decided that we wanted to use the physical book itself and we wanted to involve local artists, so we came up with the idea of tearing pages from the book and asking artists to customize them and donate them to the show. For ‘The Shining Girls Charity Art Show,’ we raised a small amount of private funding and pulled the show off on a shoestring. Altogether, we showed ninety-five artworks and raised R100 000 for Rape Crisis. So when the discussion came up of using the same recipe for her latest book Broken Monsters, we wanted to challenge ourselves and raise double the amount of money with double the amount of artists. That’s where we knew we needed more substantial funding support to make it all happen and to make sure that 100% of the proceeds of the art sales would go to the nominated charity. We approached Nando’s who we knew shared a similar passion for local art and for giving back, and luckily they loved the idea.

This year, the proceeds go to Book Dash, a project that aims to put storybooks into the hands of children who ordinarily would not be able to afford them. What made you choose Book Dash?

Lauren Beukes: Book Dash really care about the power of story to open doors in our heads and out in the world, too. Their dream is for every child to own one hundred books of their own by the time they’re five years old. That’s so inspiring and it ties in beautifully with the themes of the book and my own interests.

Could you tell us a bit more about the artists who have been involved? How do you feel the show comes together as a cohesive art exhibition?

Jacki Lang: The shows have been really incredible. We are so grateful to and so humbled by all the artists who have given so much of their time, talent, resources, and ultimately donated their work for free. It has been the most wonderful collection of over three hundred pieces of absolutely unique work on book paper by some of our most coveted and emerging designers, illustrators and artists that will never exist in this way again. 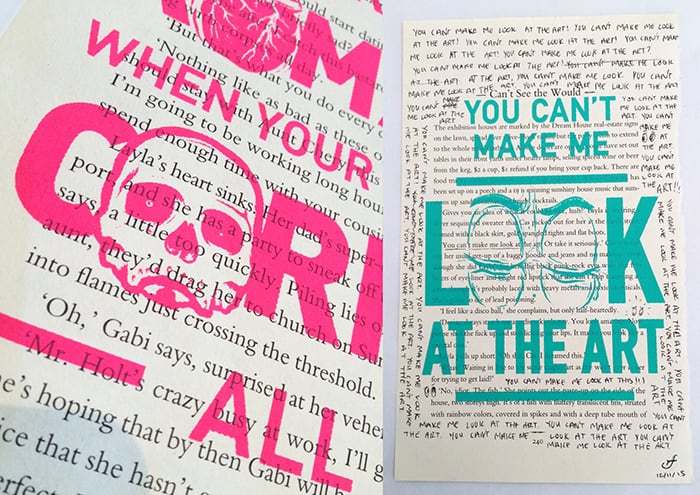 I don’t usually get the opportunity to create for group show exhibitions as I usually work within the world of advertising. So when Jacki approached me to do a piece for the ‘Broken Monsters Charity Art Show’ and explained that it was to raise funds for Book Dash, I wanted to get involved.

I’m inspired by typographic work, so I wanted to experiment with some sort of poster-like typography with an illustration twist. After doing a skim of the pages that were handed to me, I chose two containing sentences that I thought were funny or provocative enough to create artwork for.

Jacki was cool enough to let me hand in my work way overdue and still put on such a great show. I was really grateful to have been involved, sold both my pieces and know that the money all went to a good cause. 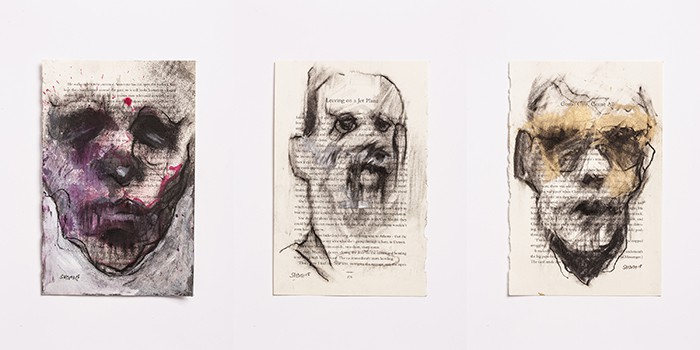 The tone of the book and the subjects it deals with immediately resonated with me. After reading the line, “we’re all a little bit broken inside, but it’s how we live with it that determines who we are,” I was hooked. My ‘Visceral Portraits’ explore all the aspects of the human spirit and can reflect immense beauty or utter despair, underpinned with a fragility that evokes a strong emotional reaction from the viewer. The biggest challenge for me was scaling my work down from 2m canvasses onto a page from a paperback. I was a bit tentative at first, but was pleasantly surprised at how well my work translated to this much smaller medium. Seeing my work at both shows and knowing that it will make a profound difference in a child’s life was a truly humbling experience. 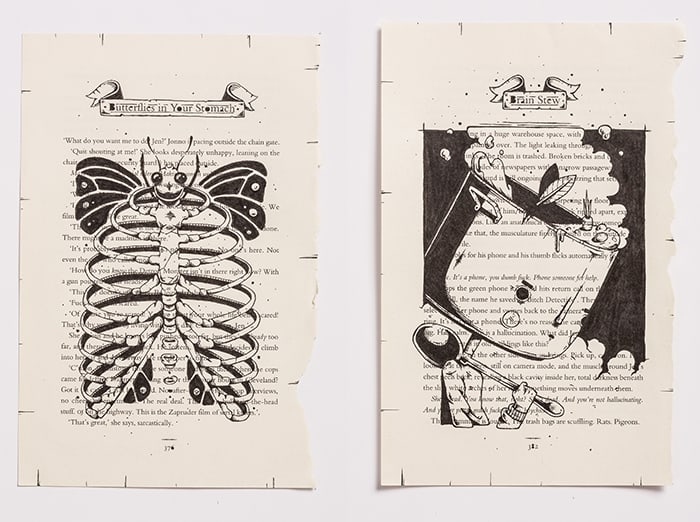 Producing artwork alongside so many amazingly talented artists, for such a good cause, was a great experience and incredibly rewarding. The huge turnout at the event and the overall success of the show really made you realise that something as fun as an art exhibition could make a big impact in the lives of those less fortunate than ourselves. There was total creative freedom for the artists to express themselves and, as such, the chapter titles for the pages received were more than exciting enough to instil the inspiration to create something interesting. 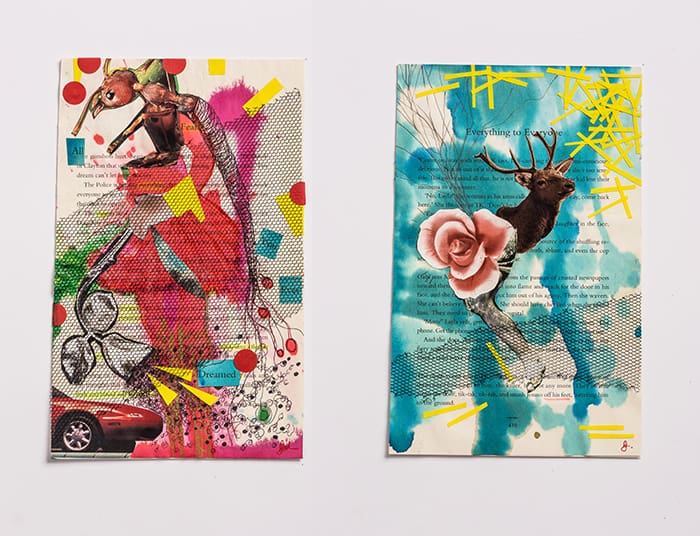 I am a great fan of the work of Lauren Beukes. Her story lines are unusual, unsettling and scary as hell! They conjure up vivid and disturbing visual imagery. As a visual artist, I enjoy the playful tightrope walk between fact and fantasy, and the colourful characters who are often simultaneously fascinating and repulsive, especially the killer in Broken Monsters. There is a lot of scope for playful layering of imagery and concepts, which led to my two mixed media collages.

This is the second year that I have participated in this charity art auction. I think it’s a fantastic idea to combine literature and the visual arts, since we, the creatives, are the fuel of South Africa’s imagination. What better way to invest in our future than to give books to children.

The city in which Broken Monsters takes place is Detroit. For my house piece, I created a beautiful Victorian house with blacked out windows to suggest the abandoned state of many of the houses in this ghost city. There is also a suggestion to a skull shape with the top windows being eyes, the bottom windows teeth and the detail above the door, the nasal cavity. This reflecting the macabre tone of the book. My second and third pieces are the diamonds falling like rain from a cloud and the foliage collection. In these pieces, the tone is about nature and their differences, looking closely at the everyday and the differences between us all.

I took part in the ​‘Shining Girls Charity Art Show’ exhibition a couple of years ago and I returned this year because Jacki and Lauren are awesome women, doing awesome things. I also love that all the money goes to charity.