“The local response to climate refugees [however] has been varied. Periodic clashes between Swazi citizens and refugees have been reported in some parts of the country, with the display of xenophobia on the streets standing in stark contrast to the government’s welcoming public statement.”

It is a familiar story, especially in previously colonised countries where the crippling effects of resource exploitation and natural disasters leave the land ravaged and economically dependant on foreign investment. The irony of course, is that this predicament is by and large a result of global enterprise operating in a neoliberal free-market economy. Swaziland has experienced severe droughts in recent years and increasing pressure is being placed on infrastructure from the rising number of immigrants arriving in the country. It comes as no surprise therefore that many readers glossing over the newspaper on Wednesday did not realise that the story was fictitious.

Set in the year 2050 and tucked in amongst other headlines such as ‘Eskom bail-out causing social unrest’ and ‘The Rise of BitCow’, the article formed part of a larger collaborative effort between Yebo! Art and Design, The Swazi Observer, Londza Designs, and the Department of Meteorology to raise awareness around the potential effects of climate change in the years to come. In this vision, the world population sits at 9 billion, temperatures reach well into the 40s, category 5 cyclones frequently sweep the Mozambican coastline, and bread costs R196 a loaf. “Climate change is the most pressing and pertinent topic of our time. We need to realise this, and address it,” said project co-ordinator Dane Armstrong, “We need to mitigate our impacts, whilst also adapting for the already-inevitable changes that are coming. That being said, it’s hard to individually understand climate change, let alone begin to address it. We therefore wanted to incite some kind of collective awareness of the issue by imagining the future – for better and for worse. It’s only by leaping forward in time that we might begin to understand how the complexities of a changing world might unravel, and how this might affect some of the fundamental aspects of our personal lives that we take for granted; our income, our politics, our sports, our food… By doing this, hopefully we can incite some understanding in people as to how interconnected everything is, and to instil some agency to not only imagine what the future could be like, but to act now to get to where we want to be.”

The supplement was published just two days before the opening of MTN Bushfire 2017, adding fuel to conversations surrounding this year’s thematic focus on environmentalism and sustainability. In addition to the contributing activists, experts, and journalists involved in the supplement, Yebo! Art and Design hosted an exhibition titled ‘The Burning Question’ at the festival which provided visitors an opportunity to engage with a multitude of work from Swaziland, South Africa, Kenya, and Zimbabwe that attempts to tackle the subject of climate change from varying perspectives. One such work, Celimpilo Dlamini’s The Perplexed Farmer, echoed the same sentiment expressed in Remigius Dlamini’s story, namely that those forced to suffer the consequences of this disconnect are also, to some extent, dependant on those perpetuating it:

“One of the things that experts and others who discuss the issue of climate change seem to agree on is that the people most responsible for causing the phenomenon i.e. western/developed nations don’t experience its effects nearly as much as the people who contribute the least to the causes,” read the artist statement. “It used to be that a farmer would plough his fields at the start of the rainy season, harvest his crop when the time came and live off his produce, leaving some seed over for the next season. Now, with the rainy season starting much later if at all and lasting much shorter, farming in the only way that these communities know how is becoming impossible. They don’t have the technologies for irrigation or drilling for ground water that developed countries can use to mitigate the effects of longer dry spells. Even the expertly engineered seeds that are sold to them, with the promise of being resistant to harsh climates cannot withstand the present conditions. Plus they have the added disadvantage of not yielding good harvests if replanted from a previous crop, resulting in recurring costs.” 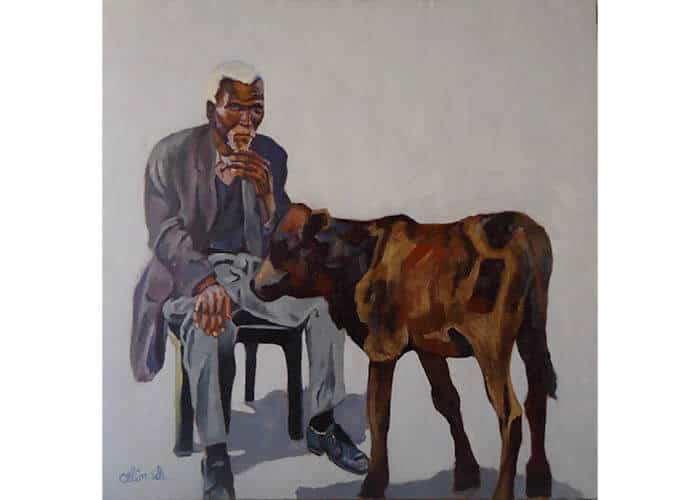 Celimpilo Dlamini, The Perplexed Farmer, 2017. Oil on canvas. Image courtesy of the artist.

In an attempt to revitalise Swaziland’s socio-economic situation, the government has begun to implement what is called the 2022 vision. Outlined within their goals for the nearby city of Manzini, amongst other things, is the upgrading of public transport, the creation of user friendly recreational parks, discounted property taxes for the elderly, sustainable urban agriculture, technological advancement, and the development of skyscrapers. The intention is for Manzini to become a ‘First World City,’ with zero crime, unemployment, or poverty, and world class infrastructure; a city that is economically, politically, technologically and socially sustainable. The list is long and commendable, yet it is important for such a vision to take into account the realities expressed through the likes of Celimpilo Dlamini, and not turn them into politically charged box ticking exercises. It is telling that few, if any members of the corporate sector in attendance at this year’s festival spent time engaging with the plus 70 works on exhibition.

“What do we mean when we talk about sustainability?” questioned Amy Brickhill, a Masters student from Warwick University, who, despite working long hours on accreditation at the other end of the festival, took the time to come and engage. “In a rapidly changing world, how can we predict the needs of future generations, and what do we actually mean when we talk about sustainable development, the latter often implying that what currently exists needs to progress or grow? At what point do we begin to make do with what we have?” As Celimpilo Dlamini observes, these technologies only serve to mitigate the problem, and since they are out of reach for most, should be abandoned to accommodate practical solutions that can be implemented on an individual level. 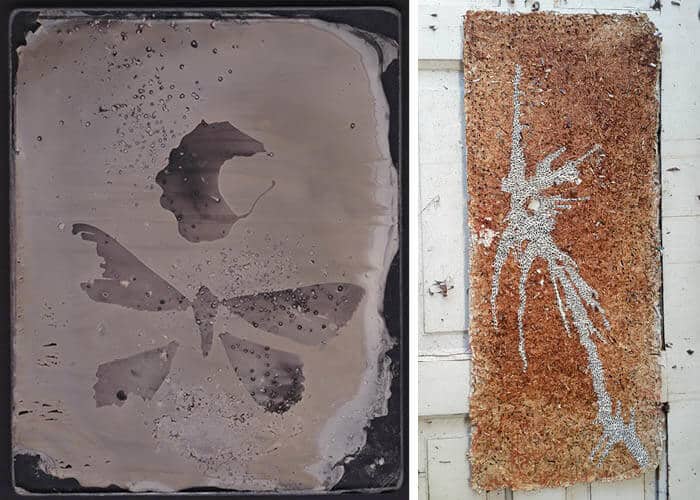 Neville Starling’s The Moon & The Moth — a play on the phrase “like a moth to the flame” — seems to suggest that there is some kind of intrinsic pull toward our inevitable demise, that we’re somehow drawn toward what he refers to as our ‘imminent incineration.’ Fela Dlamini’s wood sculpture, The Survivor, shares this sense of inevitability, yet finds refuge in African women’s ability to adapt and survive. “They are far stronger than men,” he tells me. On the same note, Sharleene Olivier’s I am an ant finds sanctuary in our likeness to ants: “Living in a city reminds me of large ant colonies. Sitting in non-moving ribbons of traffic on the highway in the mornings to work and in the afternoons going home. One car following another, bumper to bumper. Going about our business. A small cog in the system.”

In her artist statement Olivier describes how ants have been able to resist the effects of climate change by trapping small amounts of carbon dioxide from the air into the limestone used for their nests. “Some scientists have calculated the mass of the ant population to be equal to that of the weight of the human population,” she continued, “When one considers this then the impact of the ant on absorbing the carbon dioxide may in fact be a great contributor to decreasing global warming. On a personal level it makes me feel like not giving up on what I can do to help the environment. Parallel to the ant, every little bit done by every individual can add up. Then I can make a difference[…] The little steps become a way of living and thinking.” 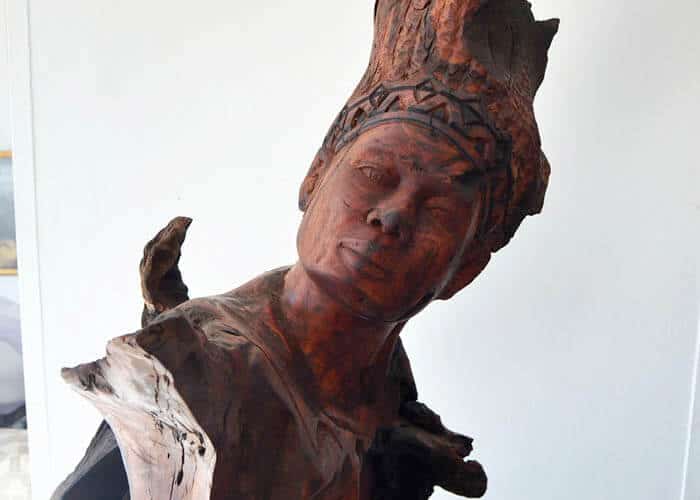 While it would be impossible to ignore the irony wrapped up in a ‘Go Green’ festival sponsored in part by Total, it would be equally naive to discount the importance of the festival on the cultural and economic sectors of the country, or the significant steps taken this year to improve waste management. “The festival mandate this year aimed to try and reduce the amount of waste generated over the course of the weekend by meeting a minimum recycling rate of 50%. While it is still unclear whether or not we were successful,” explains Waste Management HOD Janine Thomas “it looks like we will exceed this figure, having ensured that organisers, traders, and visitors to the festival were able to use eco-friendly alternatives.” The move toward greener pastures may be small, but the reality is that Swaziland is still dependent on foreign investment. That can’t be avoided, at least not yet. What is important is that we begin to realise the framework in which we function and make whatever steps we can to ensure that it remains true to a realistic vision of the future in which real change may be actualised.

In returning to the newspaper supplement I came across another article entitled ‘Three Pillars’’ of Sustainable Development in Swaziland’ by Mathendele Armstrong which paints an alternate vision for the country. Having faced numerous setbacks in their transition toward self-sufficiency, most notably the temporary collapse of the Rand in 2019, Swaziland began to implement food, water, and energy policies (the ‘Three Pillars’) to increase self-sufficiency in all sectors. Set to host COP 56 in the weeks to follow, Swaziland has become a beacon of hope to the rest of the world. Rather than the skyscraper landscapes of government’s 2022 vision, this period of transformation is founded on the migration of small-scale farmers to permaculture and other regenerative farming methods, with energy self-sufficiency marking the backdrop for financial stability. “Finally,” it concludes, “the Swaziland Water Network will be talking about Swaziland’s remarkable journey from being highly drought susceptible to becoming one of the world’s most efficient users (and savers) of water per capita in the world. With further heat spells forecast for the years ahead, many countries will be looking to Swaziland to learn about how best to capture, store and save water.”