The Colours of Change

in News Articles 2013
Share on facebook
Share on twitter
Share on email
Share on whatsapp
‘The Colours of Change’ exhibition, held at the at the !Khwa ttu San Culture and Education Centre, opened last Friday, 7 March 2014.
!Khwa ttu (KT) is a San Culture and Education Centre situated on the West Coast, which is dedicated to celebrating San culture – past, present and future. Its key goals include restoring and sharing San heritage.
Kuru Art Centre. Photograph by Paul Darné
The opening last week of an exhibition of contemporary art produced in Botswana by the Kuru Art Project, highlighted the efforts of !Khwa ttu to empower the San to reclaim and share their heritage in their own way.
Nicolaas Maritz opened the exhibition. Two of the artists exhibited, Jan Tceka and Xgaiga Qhomatcã, came down from Botswana (where the Kuru Art Project is based) for the proceedings, along with one of the founders, Maude Brown, who introduced the project and artists.
Xgaiga Qhomatcã joined the art project in 1997 when he attended a workshop that was held to identify new artists for the Kuru Art Project. Jan Tcega joined the Kuru Art Project in January 2005. 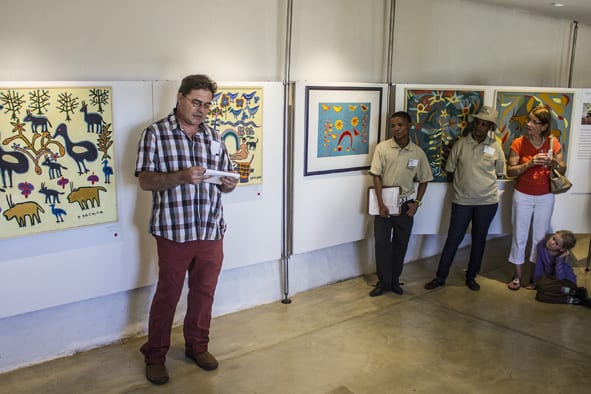 Nicolaas Maritz, opening speech. Photograph by Paul Darné.
Originating in 1990 in D’Kar, Western Botswana, the Kuru Art Project has produced contemporary art that is original and remarkable in character. Dating back to the era of rock paintings, art has always played an essential role in San society. The Kuru artists, in developing their own artistic voice, are creating awareness about the loss of their hunter-gatherer existence and the impact it has had on their lives.
In a society in which the hunter-gatherer, healer, shaman, dancer and artist are often united in one person, visual art becomes an expressive outlet for the traditions and life experiences of the San communities.
As one of the artists, Coex’ae Dad, states, “I do not see myself as just another artist. Being an artist is part of my existence as much as being Ncoa Khoe (San) is part of my existence.” !Khwa ttu strives to share the spirit of the San people by enabling these artists to transcend cultural limitations and reach an international audience through the centre.
Since its inception, the artists of the Kuru Art Project have won awards gained recognition. Their work is now found in private and public collections throughout the world and has been used for several publications and book covers. 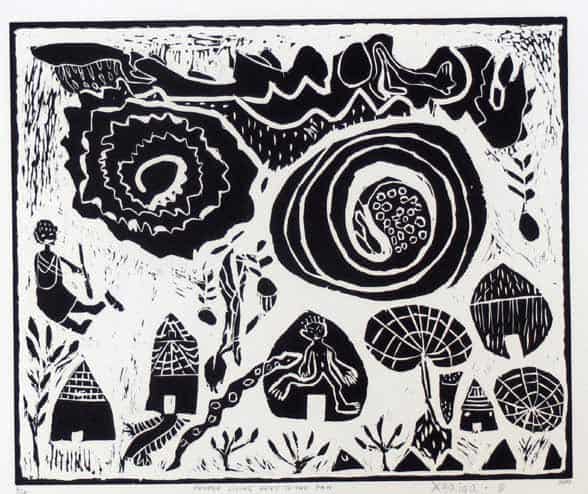 Xgaiga Qhomatcã, People Living Next to the Pan (2005). Linocut 8/15. 320 x 380 mm
!Khwa ttu is dedicated to the culture and heritage of the San people of Southern Africa. It is a vibrant joint venture between the San people represented by the Working Group of Indigenous Minorities in Southern Africa (WIMSA) and the Swiss philanthropic UBUNTU Foundation. By combining adventure, relaxation and education !Khwa ttu will leave a lasting impression and a new understanding of the phrase “San Spirit Shared”
http://www.khwattu.org
The Colours of Change Art Exhibition is supported by the National Arts Council, National Heritage Council, National Lottery Distribution Trust Fund and Ubuntu Foundation.