The Controversy Issue (13.2): Mirrors & Echoes, In Conversation with Emeka Ogboh and Eva Langret

in News Articles 2013
Share on facebook
Share on twitter
Share on email
Share on whatsapp
ARTsouthAFRICA 13.2 is the Controversy Issue. Following the opening of ‘Mary Evans and Emeka Ogboh: Mirrors & Echoes’ at Tiwani Contemporary in London, ARTsouthAFRICA spoke to sound artist Emeka Ogboh and Eva Langret, Head of Exhibitions and Artist Liaison. This is the full interview as published in the December issue (13.2). 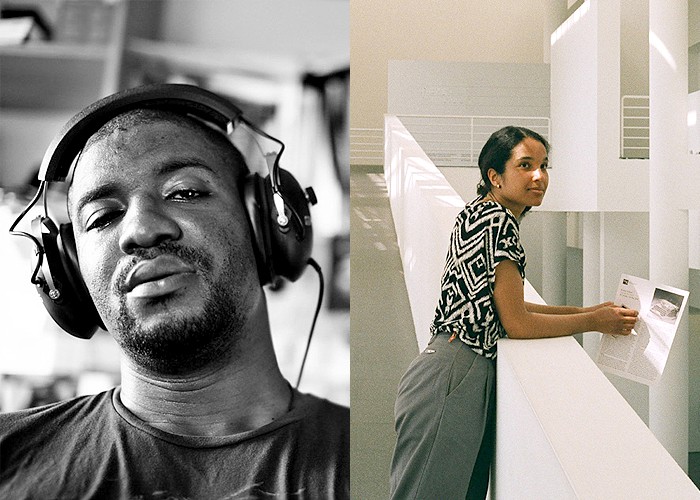 ARTsouthAFRICA: The exhibition ‘Mirrors & Echoes’ marks your first collaboration with Mary Evans. How did it come about, and what is the premise behind it?

Emeka Ogboh: This collaboration was born from a long conversation with Mary during Art Dubai in 2013. Previous to that, I didn’t know she had a connection with Lagos, so it was interesting to learn that she did, and also find out how much she could recall of the time she spent in the city. In summary, the exhibition/collaboration is about memories, space and time.

Nostalgia and longing, as well as echoes of the past firmly rooted in the present, seem to be important in ‘Mirrors & Echoes.’ How do these issues play out for you?

Nostalgia and longing play out for me through Mary’s recollections of Lagos, and my connection to these memories from a contemporary point of view, that was the point of departure for the works I created. I initially started my works while in Lagos, but most of the work was done outside of the city. This situation actually helped me understand and connect strongly to Mary’s point of view.

Would you say that you are interested in making the everyday strange? Or are you more concerned with providing an accurate reflection of what is already around us, in a reconfigured manner?

No, I’m not interested in making the everyday strange. The latter part of your question is closer to what I do. I present the everyday just the way it is, sometimes with tweaks here and there, remixed or reconfigured as you pointed out, but still close to what is familiar.

Congratulations on being chosen to produce a work for the Peace and Security building at the African Union in Addis Ababa. Please tell us something about this.

Thank you. It’s still in its conceptual stage, but there will be archival/historical audio, recorded narratives and some compositions in the mix. I’ll also be working with new loudspeaker technology to create a nonintrusive but immersive sound experience that will take the listener on a journey around the installation space

Finally, where to now? What will drive your work in the future and what are your upcoming plans?

My passion and interests will be driving my work in the future, which will hopefully keep growing organically. As for upcoming plans, I’ll be experimenting with microbrewing to create a signature beer.

ARTsouthAFRICA: Please tell us about your curatorial background and experience in the art world?

Eva Langret: I’ve been working as a curator since 2005, when I arrived in London (I grew up in Paris). That same year, I was appointed curator of 198, the Brixton based art gallery that played an important role in the conversation around black culture in the UK in the 1980s. After this I joined The Delfina Foundation, where I worked on an international artist residency programme across the UK, the Middle East and North Africa. I also curated the exhibitions programme. I then worked with Jules Wright of The Wapping Project, heading up her photography gallery, where I curated Mitra Tabrizian’s solo exhibition, amongst many others. I am now Head of Exhibitions at Tiwani.

What is the curatorial premise behind the exhibition? Please elaborate on the exhibition and your work with Emeka and Mary Evans.

Emeka and Mary started a conversation last year during Art Dubai, and we wanted to give them the opportunity to turn it into a collaboration. Much of their dialogue revolved around Lagos; Mary left when she was a child, and never returned, though the vivid memory of the city has always stayed with her. Emeka lives there, and much of his work revolves around representing the city through sound — updating the genre of the landscape with new technology, and opening up its sensorial remit.

So much has been said and done around the African city in the last decade or so, but most of the conversation remains anchored within documentary strategies. We wanted to open up a space to deal with the city in a more subjective way, and Mary and Emeka effectively came up with a portrait of Lagos which functions across space (he is there in Lagos, she is here in London), time (her memory of the city and his current experience), across ‘tenses’ (Mary’s practice is built around a past tense, looking at history and memory, whilst Emeka’s practice is built around a present tense, based on field recordings and observations) and media (he works with sound, she works with mixed media and site specific installations.)

What other artists does Tiwani work with, and can you share the history of the gallery?

The gallery was set up by Maria Varnava, who, like the gallery she created, is young and dynamic. She grew up in Lagos and was exposed to the local art scene. When she decided to open her own space in 2011, she sought Bisi Silva’s advice, who subsequently became the gallery’s curatorial advisor. The gallery is growing, partly benefitting from the surge of interest around contemporary art from Africa, but mostly because we do good work with great artists.

The gallery proposes something new: it’s a commercial space, but we’re all painfully aware of the work that needs to be done in terms of developing a critical discourse around the production of contemporary art across Africa. With the help of the Leventis Foundation, we run a public programme, which addresses this chasm between the market and the critical production. In terms of the exhibition programme, the emphasis is on giving visibility to up and coming artists, or established artists whose work has somehow remained confidential in Europe.

Did I mention that the team is 100% female? That also makes us a bit special, considering the existing gender bias of the art world. At present, we represent Abraham Oghobase, Theo Eshetu, Mary Evans, Simone Leigh, Andrew Esiebo and Virginia Chihota. The ‘roster’ is growing, and we will add more names to it in the forthcoming months.

Do you have any exciting projects coming up?

Loads. We are looking forward to a number of first solo exhibitions by promising young artists, and group exhibitions that allow artists from across Africa and the diaspora to connect around common areas of interest. I’m currently working on Virginia Chihota’s first solo exhibition. She is a young artist who represented Zimbabwe at the Venice Biennale. We are also working on the first publication around her work. After this, I’m working with Ruby Onyinyechi Amanze on her first solo exhibition. She is Nigerian by birth and currently doing the LMCC residency programme in New York. Ruby’s drawings have a strong narrative element to them, so we are currently having stimulating conversations around the relationship between drawing and storytelling.