Spoken and Unspoken Boundaries of the Art Fair

Since 2013, Koyo Kuoh has worked to spark conversations within the 1:54 Contemporary African Art Fair FORUM. Dozens of thinkers, creators and meaningful minds congregated to make space for digging deeper. In 2017, we embraced the proposition of The Conversationists. Kuoh asserted that to be a conversationist one must interrogate the foundations of knowing. She was inspired by Wangechi Mutu who remarked that, “we need to complicate the narrative”. Yet, one wonders how complicated things can get in an art fair marketplace. Or are we at the stage of “art fair 2.0” as András Szántó suggested, whereby the fair is “standing in for a wider art world. It’s a marketplace of ideas.”

To set the tone for this inverted exploration into criticality, George Shire positioned the framework of the ‘aftermath’ as a site of meaning for the so-called African Art boom. “At this contemporary moment, we have birthed a space for African Art, asking what will we make with our consequences?” Educationists responded with theory and practice to explain that methodologies of self-determination are in progress and do not fit chronological sequences. Elvira Dyangani Ose and Melanie Keen reminded us of the legacy for this kind of struggle, invoking Stuart Hall and his musings on post. Hall is quoted as saying, “The impetus which instituted one particular historical or aesthetic moment disintegrates in the form in which we know it. Many of those impulses are resumed or reconvened in a new terrain or context, eroding some of the boundaries which made our occupation of an earlier moment seem relatively clear, well bounded and easy to inhabit, and opening in their place, new gaps, new interstices.”

The panelists of ‘Performing Critique’ were not convinced by the glory of the aftermath and our current harvest. Travis Alabanza explained their concerns about being named and packaged. He critiqued the narrow-mindedness around blackness. Targeting specifically the ‘Queer British Art, 1861–1967’ exhibition at the Tate Britain, they posited: “What they [The Tate] did by using the word queer was they meant that then certain people would spend their hard-earned money to come and watch it.” They continued to dismantle the spectacle, “…it creates an interesting conflict for me, a conflict of holding a balance for critique, for wariness but also for experiencing joy, and let’s be real, for money.” For Alabanza and co-panelists Evan Ifekoya and Jacob V Joyce, queer British blackness is a vast terrain of identity that cannot be traversed easily by existing institutions. Those experiences appeared to be – returning to Hall – a ‘new interstices’ that requires safe spaces of care and intimacy by institutions that are entrenched in the title of Jocob V Joyce’s performance, White Walls, White Wine, White Time. 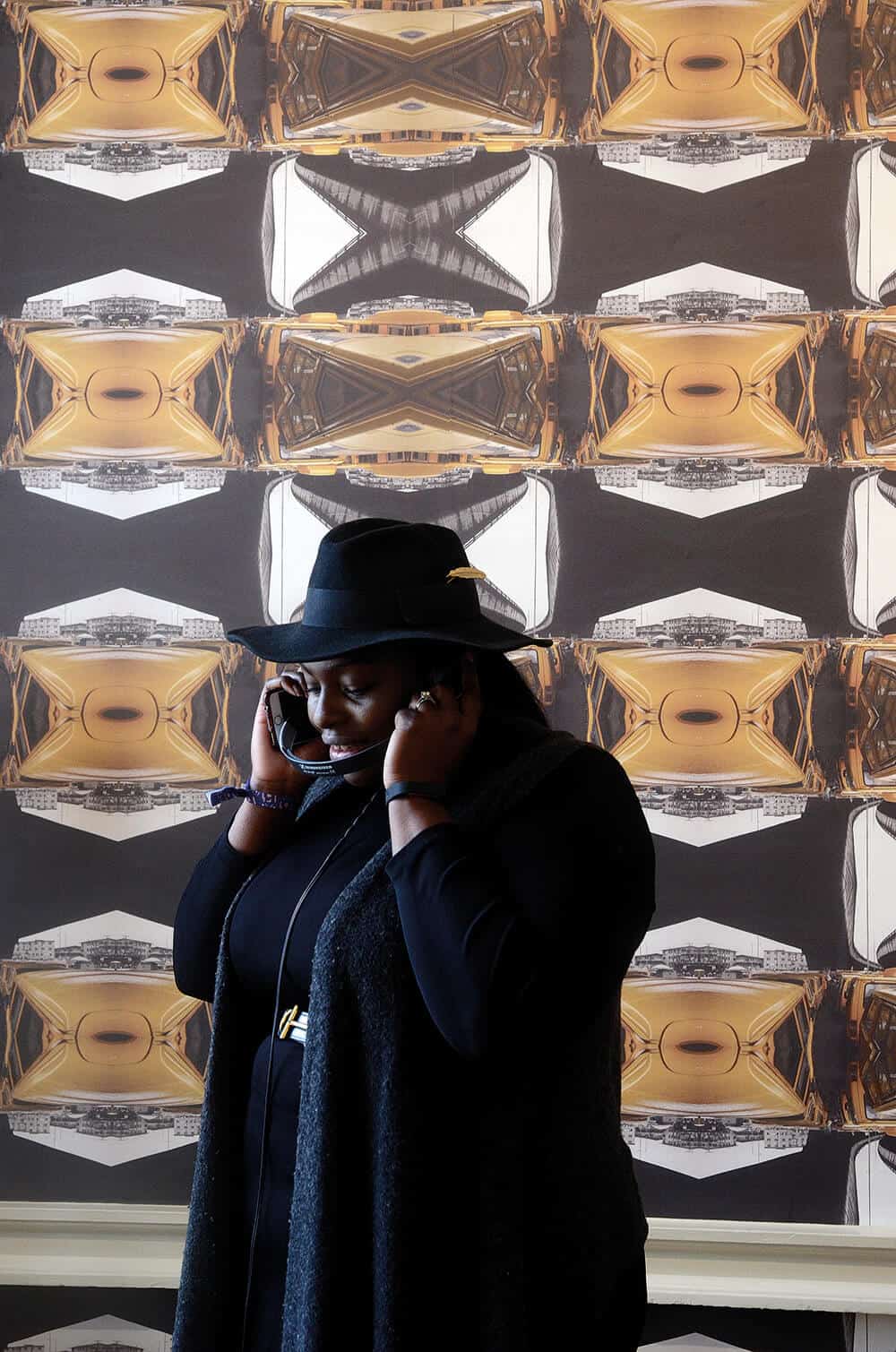 Participant listening to sounds of Ebube Dike. © Kara Blackmore. Courtesy of the photographer.

Steeped in the dense conversations of the FORUM, begs to ask if those boundaries can be traversed outside the safety of contained dialogue. Sound artist Emeka Ogboh’s work, Ebube Dike, spoke in echoes from the lower ground of Somerset House. He was inspired by the migration of sound and the audience reaction to unexpectedness in sound art. In a discussion with Nick Hackworth, the Creative Director at Modern Forms who commissioned the artwork, Ogboh said that “normally I was interested in how people who don’t know this sound, connected or perceived this sound when it was displayed in their cities. But for me now, it becomes interesting to see how people who know this sound react to this sound in a different space, where they are not expecting the sound.” He said he always encourages his team after an installation to sit back and see who the Nigerians are and wait until they respond: “I know this sound but I don’t know what is going on here.” What is going on is a layering of sonic experiences, rooted in the sounds of VW Danfo congregations from a bus park, to anchor the resonance. On cue, inside Ogboh’s installation were two women wearing headphones, moving to the moment. They recognised the destination the conductor was calling and reminisced about the other world, ‘back home’.

Another artist bringing sonic dimensions to his work is Moroccan-born Hassan Hajjaj. This London-based artist installed his ‘La Caravane’ as a special project during this year’s 1:54. His vibrant nine-screen video installation, My Rock Stars Experimental: Volume 2 and his iconic Kesh Angels are displayed in stark contrast to the classical aesthetics of Somerset House. Like Ogboh, Hajjaj transports his audience to a fantastical world of re-representation. Anyone who was part of the VIP programme would have had the opportunity to participate in a photo series in a pop-up studio, equipped with props and studio sound tracks. The video work is mounted in the second room, where one is invited to relax in the soda-crate and flamboyant textile lounge to watch the musicians watching the musicians, each playing in turn with their own audience. 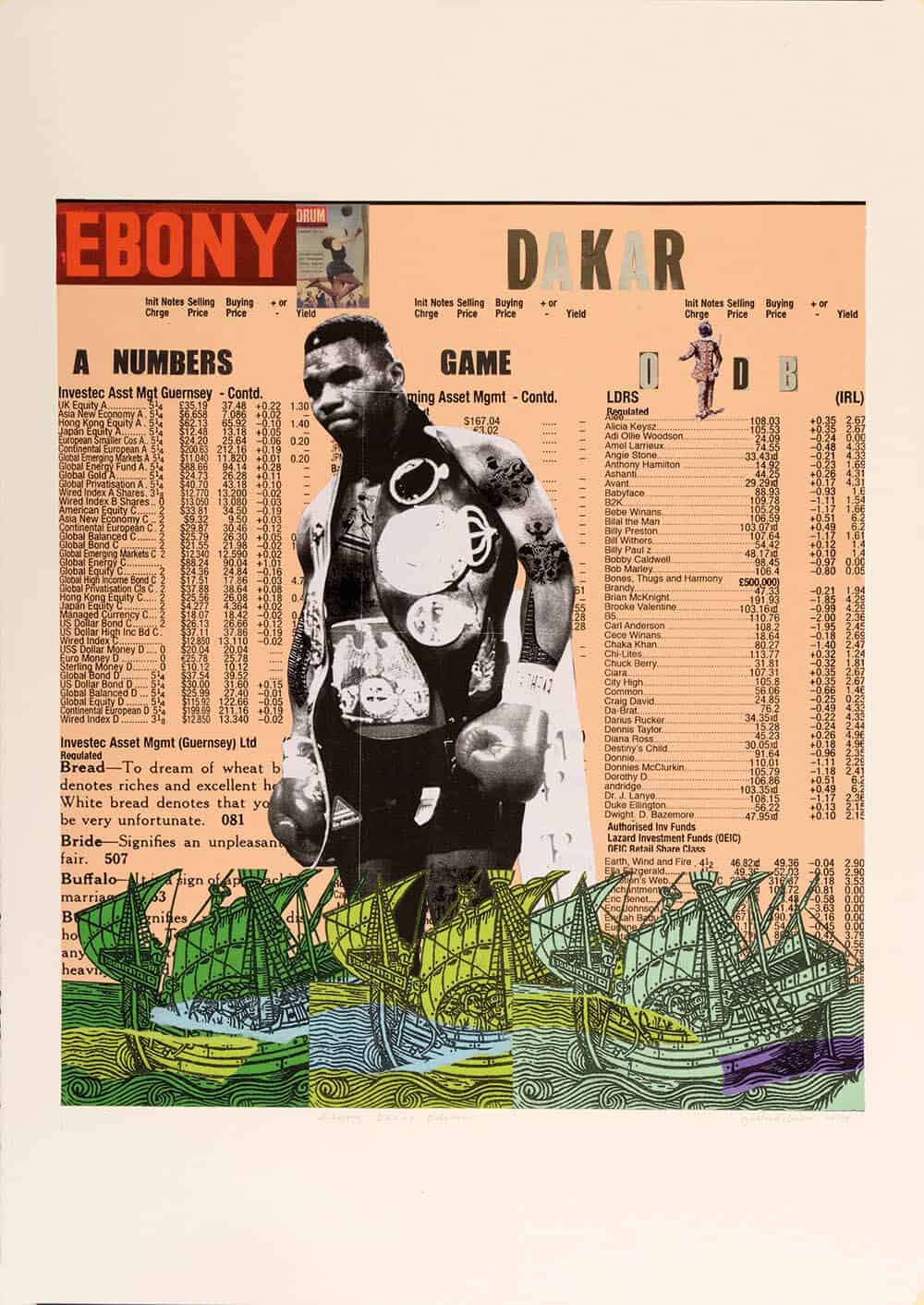 Moving into the galleries, it becomes clear that the artists are also on display, being called upon to validate or explain their work to potential collectors. Nelson Makamo, who had a solo booth with GAFRA, put it clearly that the fair is, “One space where you get to interact between collectors, galleries curators, historians all in one space … As young contemporary artists, it’s something we are looking for.” He continued to describe the interactions sometimes explaining the inspiration for this new body of work entitled ‘Living Memories’. Admittedly shy, Makamo felt that it was necessary for the artists to be present and part of the conversation. This is rooted in an ethos he upholds to disrupt the traditional relationships between artist, gallery and collector.

Godfried Donkor, represented by Gallery 1957, expressed a more distant relationship with the fair and its transactions. His position as established and ‘old school’ was matched with his relaxed responses, an exhale, “the hard work has been done”. For Donkor, the labour of 2017 filtered into a crescendo in ‘The First Day of the Yam Custom’. In his home of Ghana and embedded in the work are the conversations Donkor really wants to have and with a different kind of audience. The layers of collage, archive and meaning often found in Donkor’s work might strike a collector viscerally, like the 1:54 London preview sale of the gold-haloed fighter in St Bill Richmond – The Black Terror, but the space to speak through the work often requires audiences to revisit and sit with the piece. This durational experience isn’t always available, and according to Tumelo Mosaka, curator of the Cape Town Art Fair, the marketplace “to some extent co-opts the cultural synergies”. 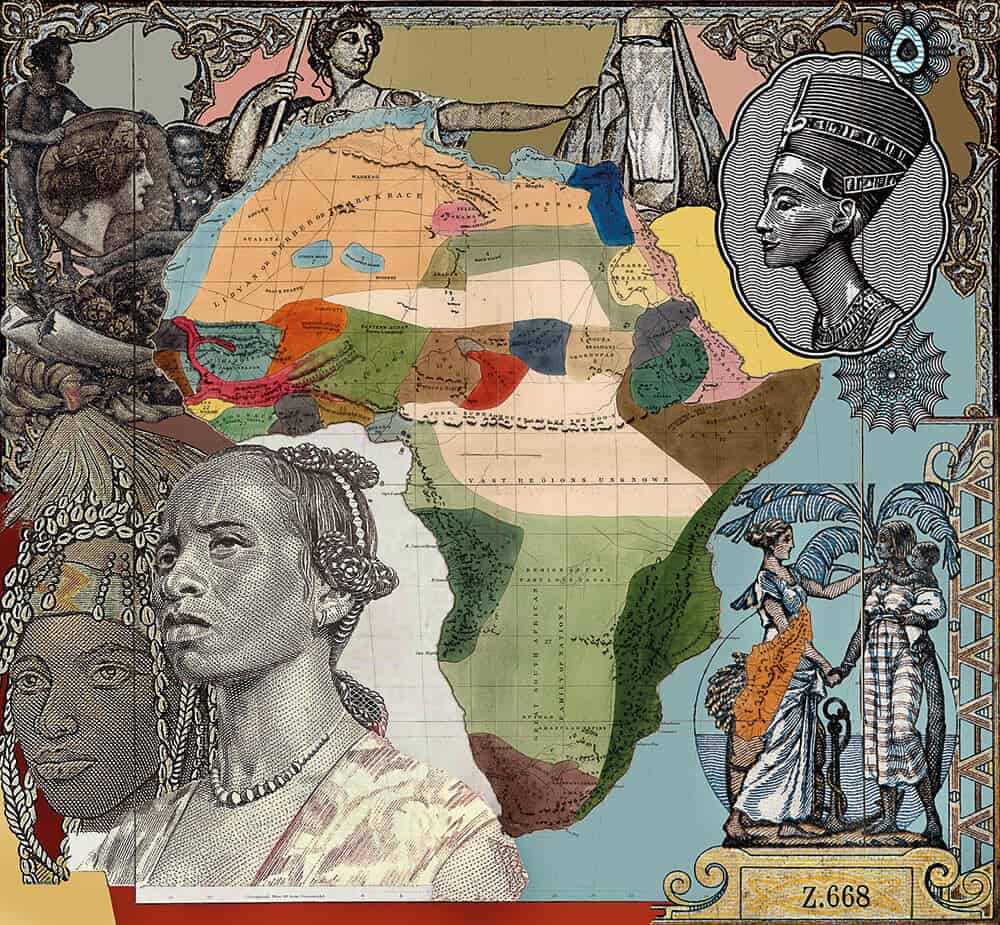 In the aftermath of 1:54’s growth over the last five years, it has become clear that the ripple effects of conversations, collections, shows and sounds are bursting from the walls of Somerset House, being fed from the continent and spilling into London’s art spaces. One artist who exemplifies this is Malala Andrialavidrazana. In a conversation with Dominique Malaquais at the opening of her solo show at 50 Goldborne, Andrialavidrazana described how in her Echoes and Figures series she involves the cosmopolitan and the intimate to create a space for additional agents to the conversation: the complice. Resisting translation, Andrialavidrazana described those collaborations as: “Complice are people who at a certain point get involved in a project in a sense that the project becomes also theirs. They are a partner in crime who has both supportive and active roles.” From the personal and family collections, which provide the foundations for the Figure series, to the close glimpse into the worlds of others, Andrialavidrazana work is, “To read globalisation not as an insecurity situation,” and to realise that “telling the geographies is also about telling about human exchanges.”

From the few reviewed conversations mentioned above, one can see that 1:54 is not merely an affirmative action art fair – it seeks out the quality of dynamic and technically brilliant works that simultaneously form and disrupt notions of Africa. To paraphrase Kuoh, we have moved beyond debating what Africa is, into a myriad of contexts and situations that can compete with biennales and museum shows. In this way, so many of the artworks embody symbols that resonate with a vast range of viewers, provoking a multiplicity of conversationists.

Hajjaj’s work will continue to rock Somerset House until 7 January 2018.

Kara Blackmore is an anthropologist, curator and writer who works at the intersection of arts, heritage and post-conflict reconstruction. Her curatorial practice engages directly with those impacted by war and seeks to make aesthetic spaces to address historical injustices. To reflect on this work, Kara is undertaking a PhD at the London School of Economics and Political Science. She is also the curator for the AHRC/ESRC supported project entitled ‘The Politics of Return’ housed at the Firoz Lalji Centre for Africa.