in CONTEMPORARY ART, CREATIVE INDUSTRIES, CROSS-CULTURAL, CULTURE, VISUAL CULTURE
Share on facebook
Share on twitter
Share on email
Share on whatsapp
“Our role as artists is not to solve problems, but to ask better questions. Herein lies the power of our investigations: allowing for breathing space; incubators in which interactions can mutate.” 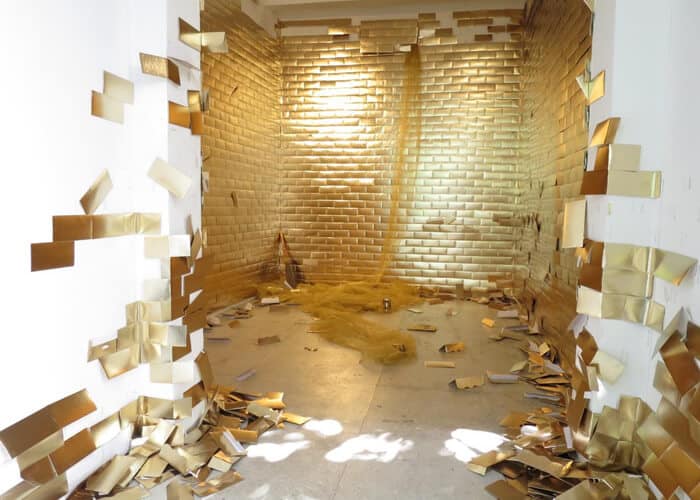 Liza Grobler, installation view of There are Worlds out there. Photo: Suresh Pandey. Image courtesy of Khoj Studio, Delhi.

THE CORIOLIS  EFFECT
Fluidity of memory, incidental connections and the migration from reason to meaningful disorder
By Liza Grobler
“To the right of me lie planned, spacious and elite residential colonies, hospitals and malls. To my left, lie the crammed, unplanned and largely informal settlements that house the burgeoning migrant population of the city and their economic activities.” – Persis Taraporevala
From the first day I set foot in S-17 Khirkee Extension, Delhi, it was hot… not just sunny with blue skies, it was sweltering. Supposedly still monsoon season, the one or two cloudbursts created traffic jams that made newspaper headlines. Other than having to wade through the courtyard at Khoj Studios in calf-deep water, it did little to cool the air. We perspired from morning to evening to the cacophonous soundtrack of car horns, our conversations fuelled by Blender’s Pride, our creative output fine tuned to the ceiling fans. Delhi is a city of colour, garbage dumps, auto-rickshaws, poetry evenings and sensory dissonance. The biological mother of “juxtaposition.”

In Physics, the Coriolis Effect refers to climatic movements (such as wind and ocean currents), induced by the rotation of the earth. In a broader sense, it refers to all the invisible forces that determine direction of movement. As you wade into the sea of oncoming traffic to cross the divide between Khirkee extension and the shiny malls, an auto-rickshaw, motorcycle and bus nearly hits you, but a near hit is a miss… 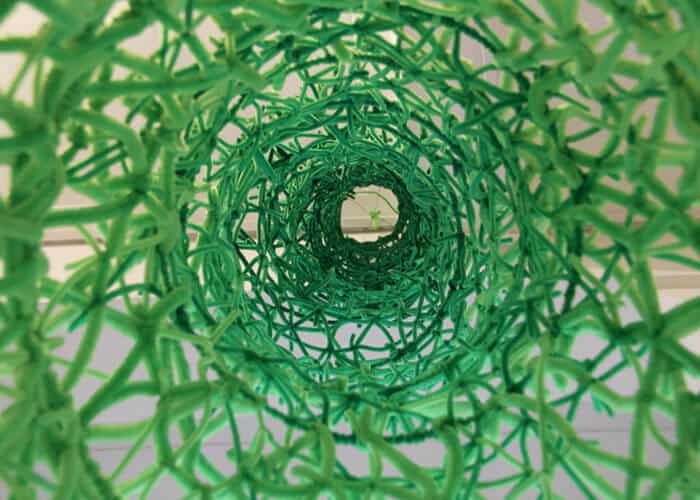 Perceptions of spaces are always shifting. The only constant is change. During the 6 weeks at the Khoj International Artists’ Association, first impressions, introductions and expectations gradually made way for micro-interactions as the city imprinted it’s own fickle nature on our beings. Our gestures left traces, some dissipated whilst others became tangible, present. The fluid border between self and other melted, shifted, disintegrated. As João Orecchia describes in relation to his exploration of sound, Horn Choir and Bell Rhythms, if you close your eyes and listen…you can hear the “fleeting and disjointed impressions of a city in constant motion through an exploration of found materials.”

“Khirkee Extension exists as the post-script to the urban village of Khirkee today, absorbing hordes of rural-urban migrants as well as international immigrants, just as the village took in refugees of the Partition sixty years ago. Against the backdrop of fading art on crumbling walls, migrant male workers dominate the street that Khoj is located on. At the same time, this public space is also contested and shared by young students, art visitors to Khoj or Gati, and several immigrants from Congo, Nigeria, Nepal, Somalia and Afghanistan.” – Swati Janu 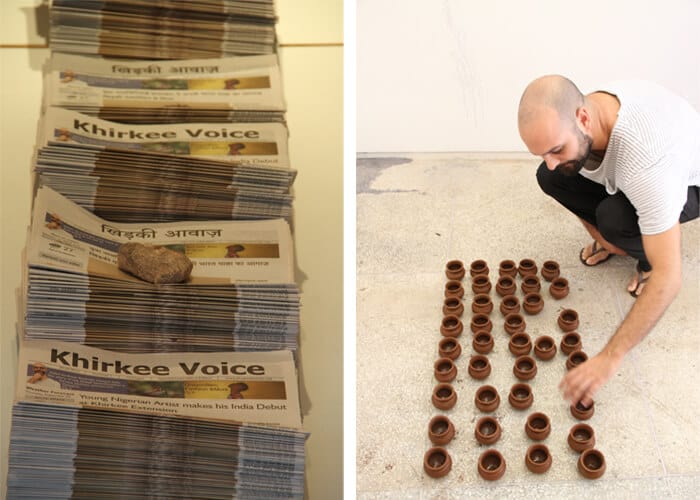 Migration in all species, whether voluntary or involuntary, is fueled by the need for survival. But these movements are linked to circumstance and perception; to how we experience our space, to how ideas travel. As a project, Coriolis Effect: migration and memory set out to build bridges between communities in conflict by suggesting alternative interactions, says writer-in-residence Persis Taraporevala. On a macro scale, the impact of seven artists in a mega city is minimal. From the reference of interpersonal interaction, this cultural mash-up continues to expand. Our role as artists is not to solve the problems, but firstly to ask better questions. Herein lies the power of our investigations: allowing for breathing space; incubators in which interactions can mutate.

“Coriolis Effect not only uses the present context of 21st century migrations, but equally refer to various moments of exchange through history; from the recent past of the Non-Aligned movements in the 20th century, to the cultural relationship shared exchanged by Indians and Africans from the 1st century AD onwards” – Khoj International Artists’ Association 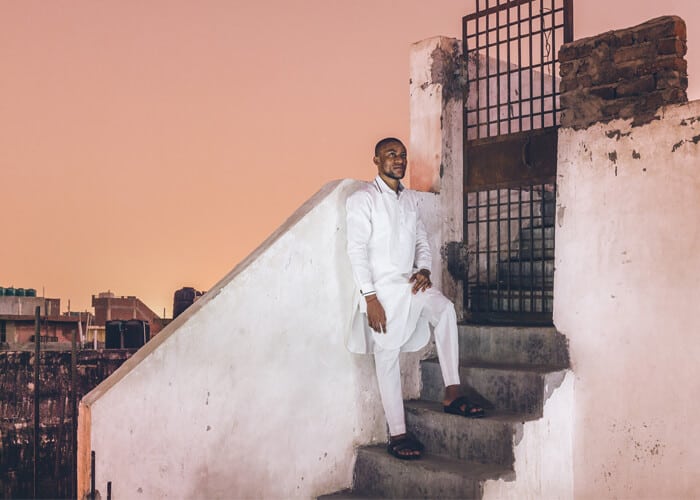 ‘Coriolis Effect’ is an ongoing project at Khoj which seeks to activate the social, economic and cultural relationship and historical exchange which exists between India and the continent of Africa. When Khoj began the Coriolis Effect project in 2014, the impulse was to respond to a growing sense of friction palpable between the resident Indians and African migrants, sharing space in the dense streets of Khirkee village.

This contemporary relationship, which at times is marred by racially charged discrimination, has also made way for more positive interactions and exchanges between the diverse cultures and ethnicities living in this area. The first residency was held in 2015, and invited not just visual artists, but visual anthropologists, photographers, filmmakers, musicians, poets and academics. The residents opened a conversation that allowed us to reflect on the shared history by India and various countries in Africa and across the Indian ocean worlds, whether ancient legacies from the 5th Century AD, or much more modern affiliations and connections as post-colonial nations in the 20th Century. The artist’s works served as a counterpoint to contextualise the experience of everyday Khirkee, by placing them within their own personal narratives of identity, movement and belonging. 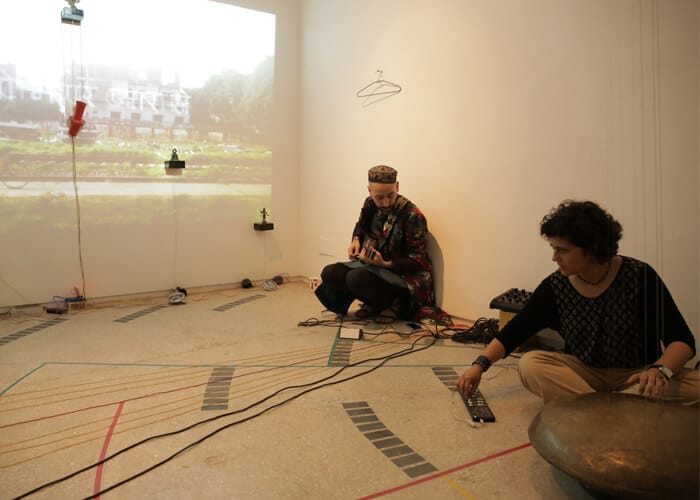 In 2016, Coriolis Effect shifted its focus, inviting artists to ruminate and reflect more broadly on ideas of migration, exchange and the formation of memory, whether individual or collective. While some artists-in-residence such as photojournalist Mahesh Shantaram and Malini Kochupillai spoke more directly to theconcerns and everyday realities of the contemporary African migrant making space for themselves in India, more abstracted perspectives were offered by others such as Nigerian photographer and visual artist Chibuike Uzoma, and South-Africa based sound artist João Orecchia. Uzoma’s photographs and drawings expanded on a very personal narrative of bodies (especially black bodies) moving through space, while Orecchia focused on creating experimental sound pieces using handmade interactive electronic instruments.

Swati Janu, a Delhi based architect and urban researcher, created a completely unique low-tech data sharing platform, inviting residents from Khirkee’s streets to contribute songs, videos, films etc., thereby creating an ever expanding multi-ethnic digital archive, capsuling the neighbourhood’s diversity. American-Caribbean artist Andrew Voogel’s work was a larger rumination on the affect of the gaze (especially in the context of minorities) , and the ability of language and phrases to perpetuate discrimination. Voogel presented his research through a large-scale textile and embroidery based installation. Liza Grobler, an artist from South Africa working with experimental forms of sculpture and installation, perhaps had the most abstracted response to the subject of the residency. Her creation of a ‘gold room’ and large scale seed-pod became a reflection on her perception of migration as having a potential to circulate and exchange ideas, through personal interactions. The artists were supported by Persis Taraporevala, who was the writer-in-residence for the programme.