MAGOLIDE Collective has staged a multi-sensory and multi-modal exhibition at TMRW Gallery, Johannesburg. The show coalesces performance, printmaking, video installation and sculpture, all enclosed in an experience of mixed reality through the use of interactive digital technology 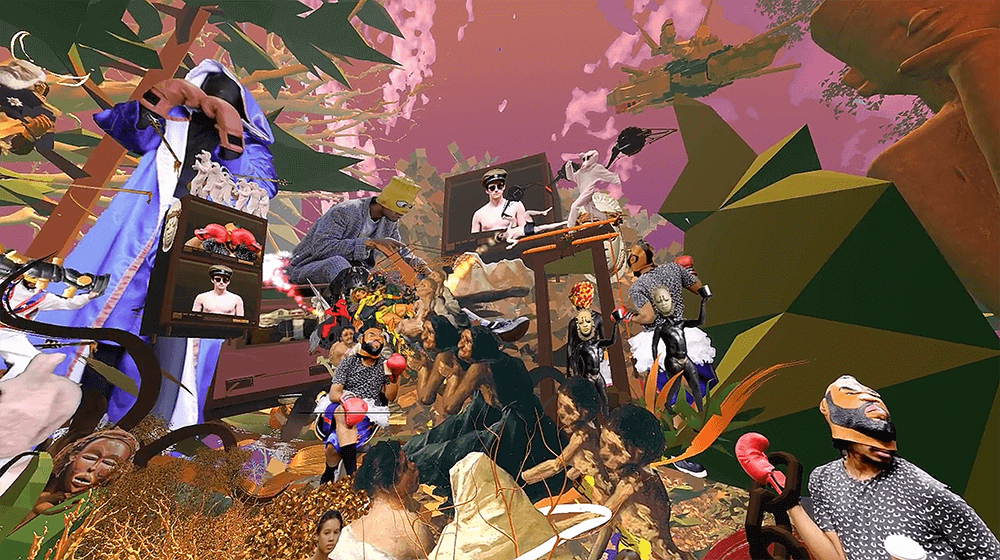 Screenshot of one of the virtual reality work by MAGOLIDE. All images courtesy of TMRW Gallery.

Within this exhibition, the collective (made up of Mzoxolo Mayongo & Adilson De Oliveira) as well as their collaborators; Gabriel Baard, Hafiza Asmal and Vincent Baloyi, intend to produce new modes of knowledge through temporal and spatial collapse – putting forth an inquiry into complex intersectional narratives of omitted histories of Africa in the story of human civilisation. Performativity is foundational to this inquiry where an arrangement of fragmented rehearsals, tales, sketches and accounts disrupt the logical set of principles and processes that govern linear structures of colonial matrices of power.

Nkgopoleng Moloi: What is the process of inclusion (and by default exclusion) of specific symbols in this body of work – Brenda Fassie, Boxing gloves and coal?

Adilson De Oliveira: Including Brenda Fassie speaks to the broader concept of what the exhibition is centered around: a series of investigations that critique the erasure and counterfactual depictions of a true African history. Brenda carries a complex and contested history of identities. Society still uses (mis)representations of her identity to disregard her cultural and political activism through her music.

Mzoxolo Mayongo: We are investigating negations surrounding the female and queer black body (as well as other marginalized bodies) whose stories are not given space and importance in the public discourse of our existence. Brenda Fassie is a predominant artistic figure in our cultural and broader socio-political history in South Africa – she represents and signifies said marginalized black bodies; the female black body in direct conversation with history. The Brenda Fassie silkscreens beckon the technical aesthetic language of Andy Warhol’s Marilyn Monroe. We wanted to ask, What would Art History look like if it were written (or painted/silk screened/performed) by an African?”

Politics of ‘self ’ are very evident in our work; what is our position in this ever shifting contemporary art world? As male artists, we are very much aware of our positionality, we engage with Brenda as an icon that overturns oppression and exploitation. We herald her as a figure to celebrate African women in society.

ADO: Motifs of coal and gold speak to the value system of hegemonic binaries which exist between the genders, and the unequal power dynamics that exist therein. Our practice as MAGOLIDE is underpinned by visual alchemy; we use mineral and natural resources as a way to transmute what is detested or ignored in the creation of new knowledge systems.

Mzoxolo Mayongo: We see the boxing gloves (and the colour red that permeates over its form) as a contestation and fight by the African body against hegemonic western frameworks of history – alluding to a cultural insurgency of a violent past riddled with repression and exploitation enforced upon the African Body.

How did you maintain coherence in this process of thinking through (art) history between, along and across varying symbols and myths… without these elements collapsing in on themselves?

ADO: I think the manner in which we explore these histories, symbols and myths speaks to the manner in which Mzo and I exist in different but intersecting frameworks. I am intrigued by the notions of the master narrative which exists in Western Art History, and the manner in which it makes claim to a number of false truths. Before this collaboration, I was a solo artist that was heavily focused on the notions of over-turning the master narrative that exists in Western Art History. I am a conceptual satirist who functions only to make art with a punchline. Our collaboration exists as a result of understanding the points at which our individual practices intersect. We bring our unique perspectives and fuse them.

MM: My practice is centred around conceptual ideas of the human condition; interrogating nuanced complexities and dispositions therein. I explore African identity, representations, fragmented memories, lived experiences, cultures and landscapes, which all form part of a larger public discourse. I do so through the means of performativity where I use my body as a tool through which many concepts can be articulated. Essentially, I would say I am a cultural and visual activist.

Our work ensures that these elements (from both of our practices) can exist in conversation with one another in a manner that maintains narrative cohesion.

Hafiza Asmal, Vincent Baloyi, and Gabriel Baard (our primary collaborators in this exhibition) performed different roles and characters in this inquiry. Hafiza brought in a unique voice with elements of her individual artistic practice. She is a linguist and her work tackles the semiotics and the power of language. Her knowledge on language as a tool of interpretation and construction of knowledge systems was valuable in ensuring the exhibition maintained lucidity. Vincent’s in depth understanding of the medium of sculpture as well as nuanced understanding of modernism helped navigate local and global narratives of modernism within the formation of South African art history. His collaboration and inclusion in this exhibition is important for us as he is a figure that has been omitted and neglected in history despite his vast contributions as a master painter, sculptor and printmaker. 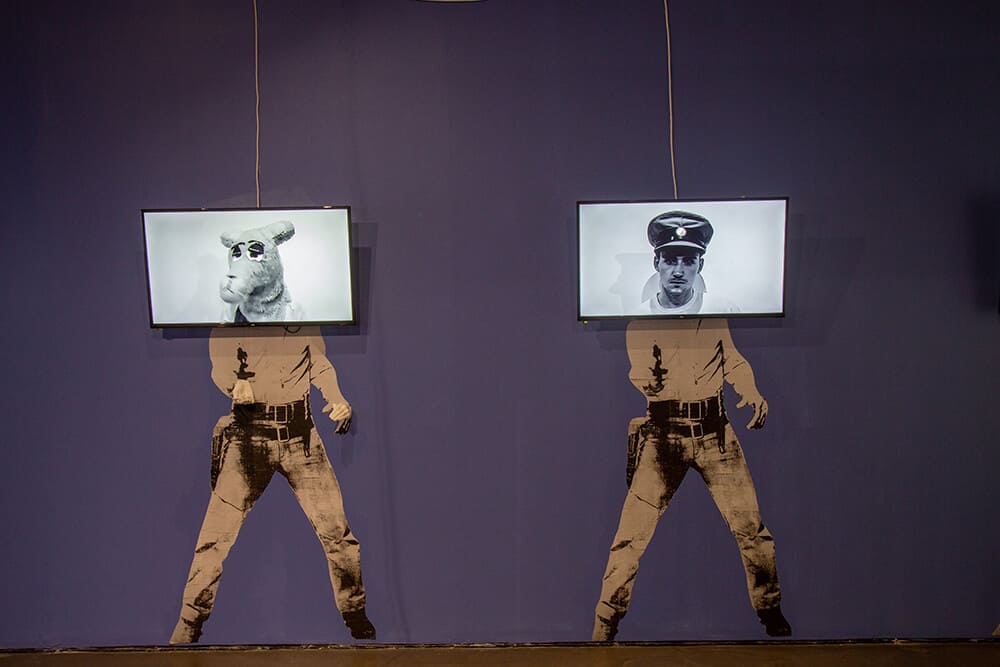 The exhibition is staged as a multisensory experience; how does this mode of presentation engage with or complicate the implicit themes of pop culture and identity as spectacle?

ADO: This mode of presentation seeks to engage with the implicit themes of pop culture and identity as spectacle, and in doing so complicate the conventions that surround them. We hoped that by engaging nearly all of the audience’s senses, a sensation of discomfort and unease would occur. There’s an element of voyeurism and an element of self-awareness in this work. We hope this distress presents new challenges to audiences. Through the TV installation for example, we wanted to surround the viewer with figures that confront their presence in the space. We wanted the characters to seem as if they were coming out of the walls, and watching or surveying the audience as they navigated the space. The line between performed virtual reality and the physical, material form is blurred. This exhibition seeks to explore these blurred lines of multiple realities and multiple narratives that are conjoined.

MM: There is an element of a ‘big brother’ prognosis to the effect that the audience becomes aware of their humanness in relation to the pervasive technology and the digital reality that is integrated through their experiences. In our daily experiences, we have become desensitized to new modes of dis/connection brought upon by technological interventions. We wanted to question how technology forms part of our human identity in the contemporary landscape while also critiquing the ways in which popular culture uses identity as a spectacle for its own benefit.

How does the use of Virtual Reality (VR) technologies affect the logic of the narrative? I’m interested in how thinking through these tools impacted on your process.

MM: Technology has not only changed how we consume art, it has changed how we create it, critique it, and share it. Video and digital art is becoming one of the most important genres of cultural innovation and expression. It is now part of our experience to record, archive and immortalize lived histories through the digital and virtual frame.

ADO: We understand that there aren’t many conventions surrounding work that takes this form, because it is such a new medium. We’re taking traditional modes of artistic intervention and elaborating on them using a new process of aesthetics and concept. The VR experience takes you out of the gallery/ white cube and transports you into a new world and we believe the audience is aware that this is the experience they are coming to engage with. Due to its novelty, this medium is still perceived as a gimmick and so most artists who have engaged with the medium do so with a limited understanding of how creatively expansive this medium actually is. A lot of South African art collectors and institutions are anxious about the medium as a collectible artistic object, which means making money off of this medium is still something many people are trying to navigate.

Ann Roberts (Director of TMRW Gallery) is one of the few people at the helm of creating a market and a framework around this medium.

MM: We were aware that we could fall into this convention of gimmicky VR work. We tackled the medium as something ephemeral that could be translated into something tactile. We ensured that the Oculus Go or HTC Vive (VR Goggles used for viewing) existed in a space in which they worked alongside traditional elements of artistic mediation.

A point of reference is how we took a VR illusion existing as a technological file, and transcribed parts of it into something tangible by turning the Oculus (3D goggles in which you view the VR work) into a sculptural object – the object functions as a readymade sculpture within the show as well as a tool used to engage with the VR medium. This speaks directly to the alchemy we spoke of before; transmuting materials from one form into another.

‘The Counterspace of Pop Culture in Zaire’ opened at TMRW Gallery, Johannesburg, South Africa, 27 July and was on view until 17 September 2019.

Nkgopoleng Moloi is a writer based in Johannesburg, South Africa.