In the lead up to the release of our December Issue (13.2), we present an exclusive interview with our cover artist for the Interview Issue (13.1), Namsa Lueba. Lueba is a Guinean-Swiss visual artist and photographer whose work focuses on African identity through Western eyes. 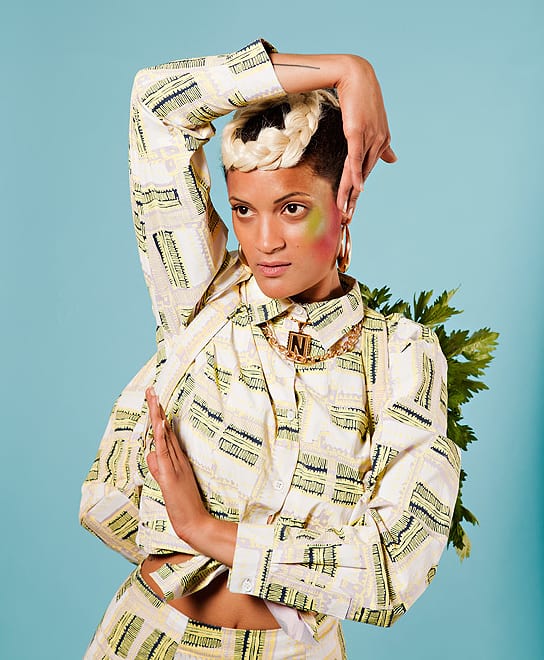 Hello Namsa! Thank you so much for taking the time to speak with us at ARTsouthAFRICA. Costumes are important in your work; in what way does the addition of props add to your narratives?

It depends on the context and concept, and whether it is my own work or a commissioned piece. Most of the time different African rituals and ceremonies inspire the narratives. I select the elements meticulously for the functions of my picture. By re-contextualising African elements through my lens, I bring them into a framework of Occidental taste and aesthetic choices.  I try to transform and put a symbol back into Western intention.

There is an element of anthropological study to your work. In what way do you feel you express or reflect on various social, political and economic issues?

The way I approach these issues is by a process of studying them, and then using those that resonate deepest with me. I put myself in a dialogue with them and extract the elements that make for the most interesting work.

Your images move beyond the confines of the photojournalistic gaze; what techniques and intentions do you employ to achieve this?

I think we need to know how to stop and look around us. Through a lens, I test my self-analysis and I put myself up for discussion. In some ways, my photographs are judgments, or accusations.

The culture in Guinea is entrenched with rituals and songs, and you grew up surrounded by skiing and folk art on the shores of Neuchatel’s lake in Switzerland. When did you become fascinated with your dual heritage, and how does this influence your photographic practice?

There is a great richness in being of mixed cultures. I am an African-European, born in Switzerland. My parents instilled in me both cultures and shared their history as well. When I began at ECAL University of Art and Design in Lausanne (CH), I knew that I wanted to deepen my knowledge of my African heritage and I decided to focus my work on African culture and African identity through Western eyes-then I developed a curiosity, sensitivity and a particular focus toward the world around me.

How do the ideas of origin and heritage influence your work?

All I knew before my trip to Guinea Conakry was that my mother is Muslim and that my father is a Protestant, although I’ve not been baptized. I became very interested in the religious aspect of my mother’s country. I discovered an animistic side to Guinean culture, based on people’s respect for it. I had already been exposed to the supernatural side to Guinea when I was a child. I visited <marabouts> (kinds of witches) when I was younger and this time around took part in many ceremonies and rituals. For me it was important to do this work, because now I feel more aware of this situation, the existence of a parallel world, and the world of spirits.

I have chosen to focus on the invisibility of the emotions that photographs can make me feel. I use my experience to visualize a photo and get full understanding of an image. In the same way, the art of photography allows me to exteriorize my emotions and my past, telling my story through different shots, in some kind of syncretism. All my photographs have been previously imagined in my mind.

The images in your series, ‘Ya Kala Ben’, present a beautiful aesthetic but maintain a cultural richness for viewers to appreciate. Of the series, you have said, “I sought to touch the untouchable.” To what extent did you achieve this?

In this work, I was interested in the construction and deconstruction of the body, as well as the depiction of the invisible. I studied ritual artifacts common to Guineans; statuettes that are part of a ceremonial structure. They are from another world. They are the roots of the living. In this way, I sought to touch the untouchable.

I traveled through Guinea and observed different rituals and ceremonies to find the ones I wanted to create the series from. I am particularly interested in the attribution of religious or mystical qualities to inanimate objects. The myths, the force of nature and the deep, intuitive, impulsive culture of Africa offered me a lot of creative inspiration. My approach was to separate those sacred statuettes from their religious context in order to immortalize them in a Western framework.

Your photographs remind one of high-fashion photography, which lends itself to a Western aesthetic. Is this intentional? Could you elaborate on the way you choose to stage your images?

While making ‘Ya Kala Ben,’ I was inspired by African statuettes; but there is another context and another meaning in a fashion way.  I always expose myself through the object I photograph. I use my experience to visualize a photo and get full understanding of an image. I enjoy fashion photography, and sometime I draw on that to make sure the series isn’t boring.

You provide the viewer with a glimpse of the ancient and fascinating traditions of a strange and colourful Guinea. What is your desired reaction from the viewer?

I want to impart a combination of acidity and freshness. I go out into a spiritual territory, beyond the plasticity of the immediate world around us. Spirituality is the tradition. Plasticity is modernity.

Are there any new trends in contemporary African Art that have caught your eye?

It’s not really new, but I’m very interested in the way African artists use different materials to make something new and relevant.

Who inspires you photographically?

What are you currently working on, and what does the future hold for you?

I’m still working on my research on the symbols of African identity, cultural syncretism and the ambiguities of ethnocentrism. I’m also working on a new picture series of my time in South Africa, where I spent the last six months.